London firebrands Gum Takes Tooth create a joyous, twitchy, electrified racket. Ahead of their support slot with White Hills tomorrow night, Jessica Crowe speaks to them to untangle the chaos, plus watch a brand new video
Add your comment » 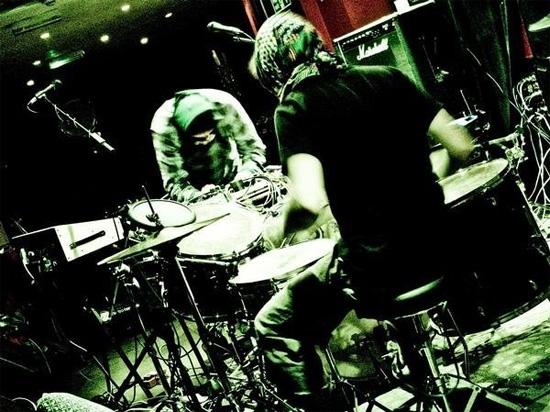 How to go about untangling the abstruse madness of Gum Takes Tooth? For anyone who's seen them live, the London-based duo are a a blitzkrieg of inertia-inducing electronic dissonance and twitchy, narcotic-withdrawal percussion, like a filthy, squat-rave raised take on Lightning Bolt. That's something they harnessed with thunderous intent on their debut album, 2011's Silent Cenotaph, released on Tigertrap. Live, the twosome draw in other collaborators, often to provide additional percussive battery, while lynchpins Jussi Brightmore and Thomas Fuglesang are conduits and focal points for the chaos that explodes around them. They're set to support White Hills at a Quietus gig tomorrow night - 17th April - so we caught up with the enigmatic Brightmore to help unpick some of the band's knotty mysteries.
Gum Takes Tooth are a slippery prospect to define - can you tell us why you decided to form the band and what your influences (non musical too) were?
Jussi Brightmore: We met in another London band. Both of us have extremely diverse musical tastes and were up for experimenting with a new toy Tom had been given, a very unusual and rare old drum synth that had once apparently belonged to one of the drummers in Adam & the Ants. It's got no sequencer; you have to play it live and you can link it to an acoustic drum kit which is what we did. It was designed to make those disco synth drum sounds - you know, like Anita Ward's 'Ring My Bell' - but does a better job of making the most earth shattering bass noises and other weird freaked out frequencies. We worked out a way to make melodies on it using one dial and one switch. Tom and I had a jam with him playing drums and me tweaking the machine, I turned on a fuzz pedal and the world exploded.
We both tuned in to this new way of working, having to play the thing together as one unit, Tom controlling time and me controlling texture, frequency and gravity. Through this limited window and collaborative essence, kind of opposite to one person being able to do anything on a laptop with a pair of phones, we paradoxically found that we could let our imaginations and influences flow more freely. The core sounds are defined by a unique and wilfully limited sound creation process which pushes us to work in new ways. We can't play any covers on this instrument. So that's the technical side of things, which should bore most people if they have any respect for music.
With regards as to what influenced us when we started, at the time we were listening to a lot of the more extreme US freakout noise rock, metal, no wave, improv noise, early punks who used electronics like The Screamers, shit that makes you sweat, mosh, stage dive, crowd surf, whether you're the only person in the room or otherwise. Though turning up to 11 on the amp and rocking out was important, there's always been psych, early electronic music and exotic oddities from other eras and cultures that all remain a huge influence. I try and pick up as much as possible from other parts of the world when I travel, and lots of ideas come from being elsewhere than Europe. I'm a massive '80s Bollywood fan. Chiru and Govinda are heroes. Techno, acid, house and related electronic music has always been a big thing for us too, especially stuff that to us has the same irresistible corporeal effect as the wigged out music we love that come from bands. We'll listen to everything indiscriminately then take our pick. Nothing is out of bounds.

Watch the brand new video for 'Buried Fires', taken from an upcoming 7" release on Endtyme Records. Video by Sebastian Buerkner.

What are your individual musical backgrounds?
JB: Aside from a bit of Queen and Michael Jackson, I didn't even like music until a friend played me his older brother's copy of 20 Jazz Funk Greats by Throbbing Gristle when I was 12. That really changed everything. I discovered music to be capable of so much more than I ever thought was possible. It suddenly seemed to be able to reflect the complexities, contradictions and confusion that living entails. Guitar was my main instrument until GTT, so I guess that's affected my desire to keep all the electronics in GTT played as a tactile live instrument. I'll never get the heavy rock riffs that made me pick up the guitar out of my head. That lead into noise rock, doom, improv noise, prepared guitar - exploring the guitar as a sound making device used in non-trad ways. On the other hand, I got switched on to acid and techno as a kid even before getting into guitar. I was so jealous of friend's older siblings being able to go out to clubs and let rip.
It took me long long time to start to make sense of all those influences.
I used to live in Brighton during a time when there was an incredible concentration of people that would constantly share musical ideas, experiment and collaborate. Playing with Dylan Nyoukis and Karen Constance (of Blood Stereo, Prick Decay, Polly Shang Quan Band and many other monikers) taught me the value of true DIY anti-technical punk ethic in making truly engaging noise music. I tried to play with as many people and in as many styles as possible; quiet-core song stuff, a queer-core electronic disco thing, detuned guitar skronk, sludge metal and loads of improv experimentation.
There was a independent cinema space there called the Cinematheque where, so long as you played along with a film and were billed as doing a live soundtrack to exploit a licensing loophole, you could do anything in a close listening environment. It was a great opportunity for people could try out new ideas and collaborations live and I got a huge amount out of idea sharing that went on during that time.

The Gum Takes Tooth live experience has a very improvised and intuitive feel. To what extent is it improvised, and how do you prepare for live shows?
JB: As Tom and I are so intrinsically connected through this instrument we share, we can work very intuitively and dynamically. Still most people are surprised that much of our music is very arranged. Durations, dynamics and feel will change from gig to gig depending on where our heads are at, but the core is actually fairly composed. That said, we might have an idea just before going on stage that feels like the right thing to do on that particular night, and go with that for a bit of the set. We always want to keep things moving.
Publicado por Miguel Copon en 9:32 PM