Rubén D’Hers is a guitarist and sound artist from Caracas, Venezuela currently living in Berlin. His focus on sound installation and playing techniques deals with the use of chords as autonomous sound spaces.
His works has been exhibited and performed at venues like ZKM in Karlsruhe (DE), Neues Museum Weimar (DE), Pure Data Convention (DE), SeaM Weimar (DE), LAB 30 Klangkunst Experimente Augsburg (DE), Heart of Noise Festival Innsbruck (AU), Netwerk Center (BE), Mochvara Gallery (HR), Oficina #1 Gallery in Caracas (VE) and at the Empty Gallery (HK).

During the period 1930 and later the archtop guitar became an important instrument in the big bands. The archtop guitar couldnt compete with the much louder horn sections. It was hard working and strumming for the guitar player to be noticed between the other instruments.

The demand for bigger and louder starded to grow and was answered by Gibson in 1934 when they introduced the super 400 18 inch wide archtop guitar.

It was not only huge in power, but also the size and the apperance.....and cost. The super 400 would put the guitar player more in the spotlight than he ever was. After the introduction of the super 400 the other guitar brands like Stromberg and D 'Angelico quickly answered with even more fancy18 inch archtop guitars.

Right know my number of 18 inch guitars in my production run is higher than it ever was. I think it is the revival of the 18. 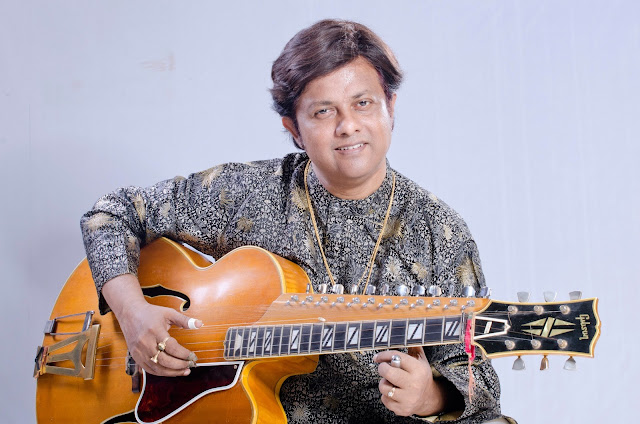 Kolkata, India's Debashish Bhattacharya started learning Indian music from his parents before he learned the alphabet. In his childhood he mastered many Indian classical instrumental styles as well as vocal music from different musical teachers in Calcutta. He became a disciple and student of Brij Bhushan Khabra, the father of Indian classical guitar, for 10 years, and also trained under Ajoy Chakraborty, the eminent Indian vocalist. He has also studied with Ustad Ali Akbar Khan. 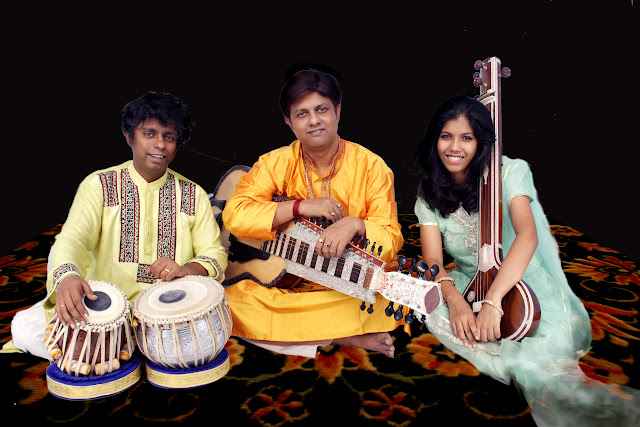 As a performer, Debashish gave his first guitar recital at the age of four on the All India Radio, and in a public concert. In his twenties, he evolved a unique style of playing guitar, synthesizing selected features of various other instruments such as the Veena, Sitar, Sarod and Sarangi. He has given to the world a new schooling of Guitar...Kolkata Gharana. 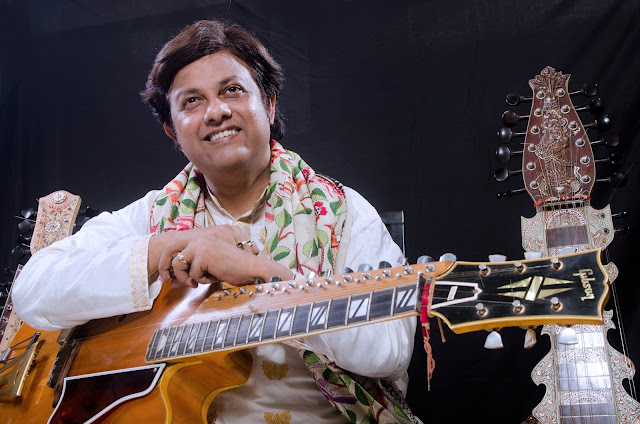 Debashish developed his innovative Hindustani slide guitars after years of research and experience. It consists of three self designed and patented guitars named as Chaturangui, Gandharvi and Anandi. Debashish plays these guitars while sitting cross legged, with the guitar held on the lap and played with a small steel bar, metal picks and a celluloid thumb pick. 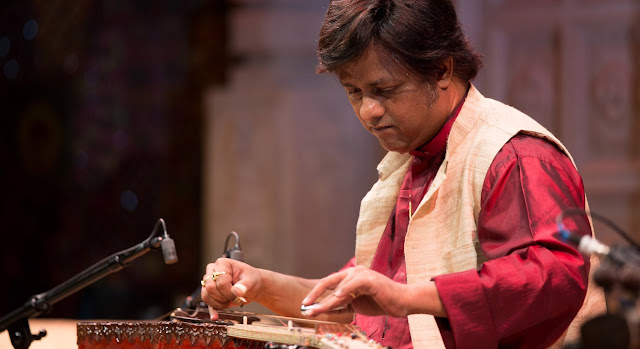 Debashish is one of the greatest slide guitarists of the world who has contributed to the guitar world a new standard and style of playing the guitar. Over more than 30 years he has cut a niche in the world of music. 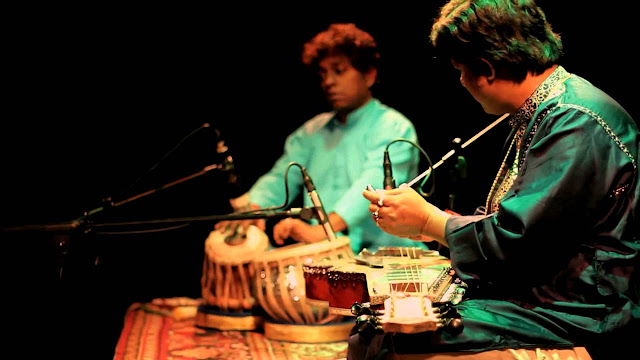 He has received numerous aficionados, his compositions, his music, and his philosophy of teaching has changed the life of many. His has also given to the world of music, the actual design of the instrument, and through his incredible talent and discipline, elevated the Hindustani slide guitar to be the highest evolution of slide guitar anywhere. To develop his playing, he has undergone decades of disciplined study of Indian vocal technique combined with his instrumental work. Debashish can sing perfectly in parallel with every blindingly fast melody he plays. Possessed of a very open musical mind, Debashish is eager and more than qualified to collaborate and truly blend with musicians from any other country. 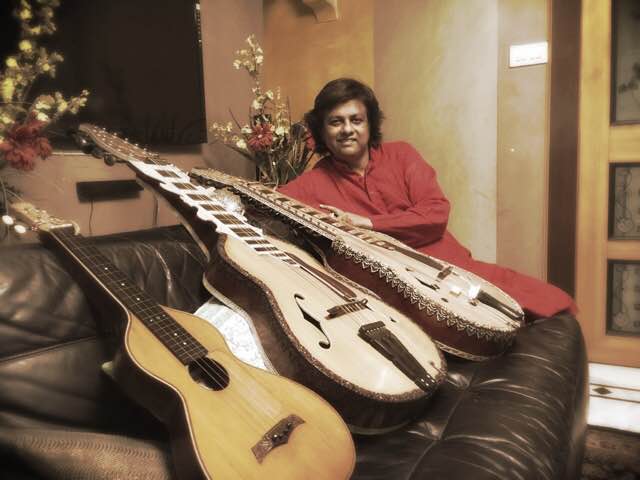 As a humble student of Indian Music (Hindustani) he has redefined Indian Classical Music on Slide Guitar. More than 3000 concerts all around the world, having trained over 1000 students, he has designed 19 guitars and out of his 15 albums, 3 have been internationally awarded. He has played with Ustad Zakir Hussain, John McLaughlin, Jerry Douglas, Dereck Trucks and many other world renowned musicians. Back in India, he has played for Pandit Ravi Shankar. He has extensively performed and performing in many Indian music festivals.

My first guitar was a six string solid neck lapsteel made by Gibtone guitar of Kolkata 1966. 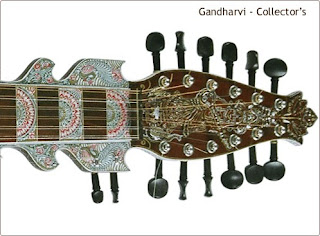 Calcutta chronicles and Beyond the Ragasphere

Calcutta chronicles was a vision naturally grown over the years of my experience with the guitar music I've learnt and heard in kolkata- as a British colony and before Muslim emperor and even before the music of Vaishnav movement 580 years from Shree Chaitanya Mahaprabhu - I had the musical vision but didn't thought about downloading the music through my three guitars- then it happened all at a sudden- I'm surprised and glad it was accepted by the music world.

And Beyond the Ragasphere was the first indian slide guitar fusion album in the history- covering the widest range of jazz blues, blue grass, indian classical , samba flamenco. It was really challenging as well intersting- cause they are 100% my own composition and back up instrumentation and back up chords etc I have never done before myself- the whole making was full of surprise, studio to scoresheet, real time recording with my contemporary guitar wizards living else where. This is unique and surprising they worked very well 4.5 star reviews Womex award all surprising !!

I come from a zen family of seven generation of indian raga music.

Bad one sucks. A good instrument is like the best one in your life who feels happy in your presence and you feel the same way.

Digitization is saving musical sounds from analog perishable devices, as well easy to access.
But problem is the business. Corporations have no choice of education to deal with music or artiste. Any next generation sophisticated utility - if used to multiple corporate money it SUCKS.

It actually kills the art and artiste community, history, it kills challenge; it kills the environment of art to grow.
Digitization didn't help the music and art in that respect. It has killed taste.

Doesn't attack you, rather attract you.
Doesn't agitate you, but complete your desire. 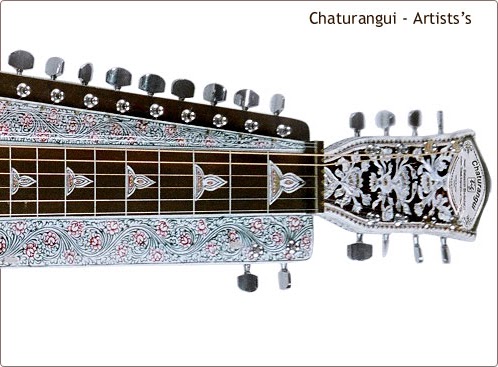 Highest form of practice of "Art of living" which shows the path of divinity.

A lot. Those unique techniques are called "Debashish Bhattacharya" App

Sitting with my Guru playing along with him or following him whether my Dad or other Gurus- after a while I couldn't follow any more- either beyond capacity or felt listening is a better choice.. 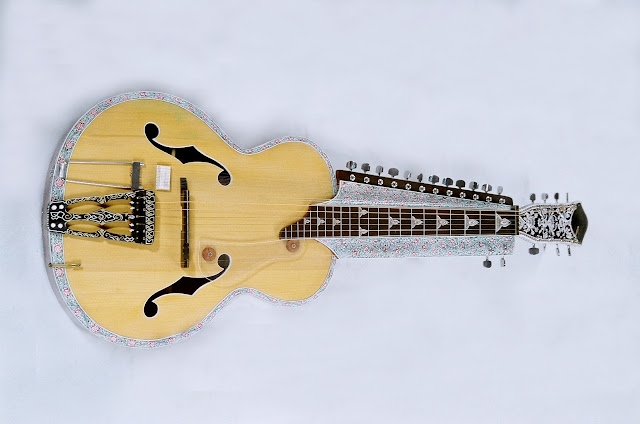 Singing of Ustad Bade Ghulam Ali khan and my father...

It's always listen and play following note to note.

I'm a painter, I'm a thorough reader of Rabindranath Tagore, Shelly, Kits and other great writer of Bengal .

Fighting against odd. Logic is my Guru.
Opposite attracts. Secret is secret...

I was adventurer, still I'm... I didn't see myself here in future; where I'm today.

Humility, honesty and obedience to your Guru's thoughts, if you valued once. Stick to it... Till you die.

Don't spend much in any other than in music.
Listen to what I say but check before believing.
When you see you are alone- you are successful in your true endeavor. 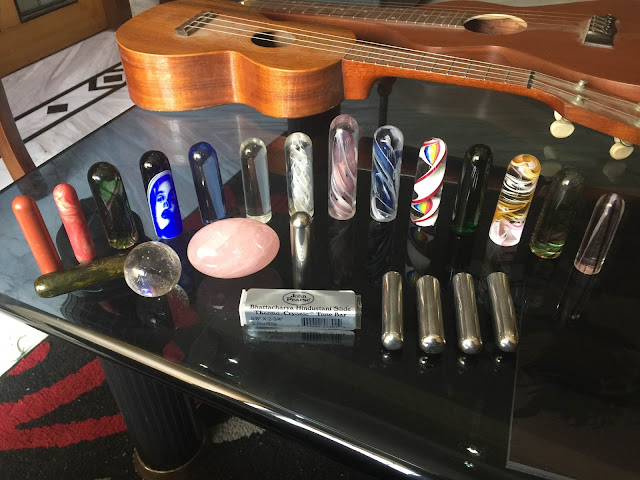 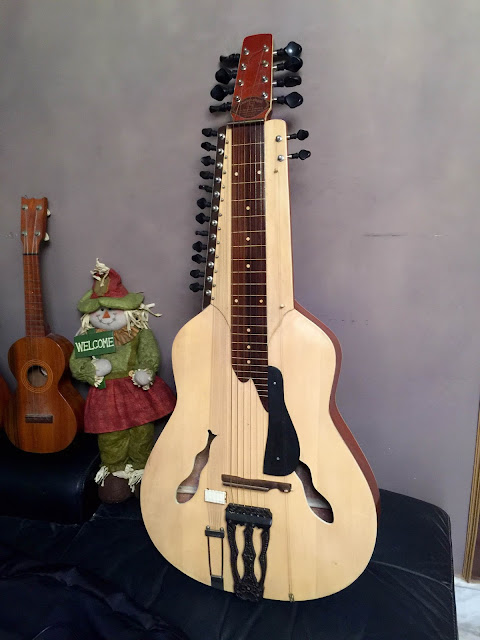 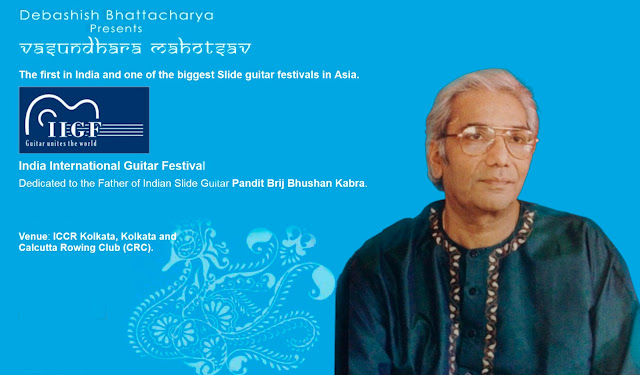 And few more traditional albums are another few years focus. With best regards and greetings of the day. 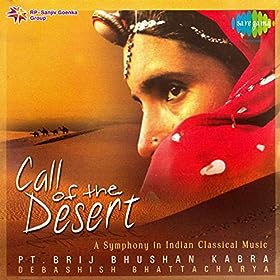 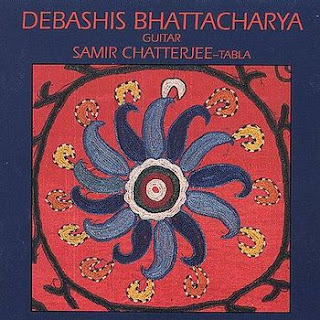 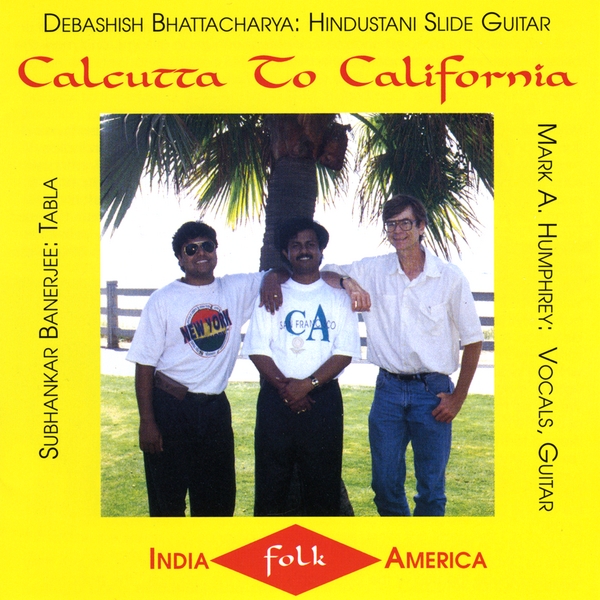 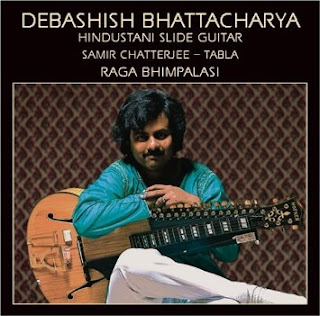 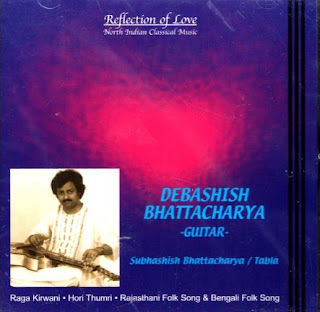 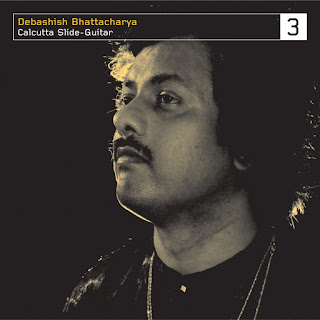 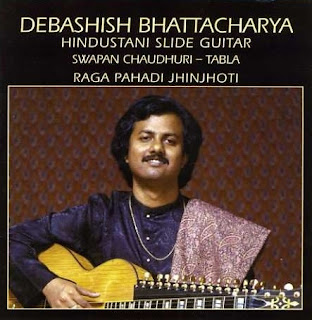 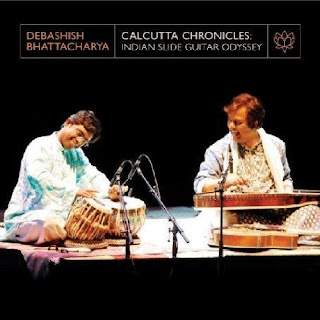 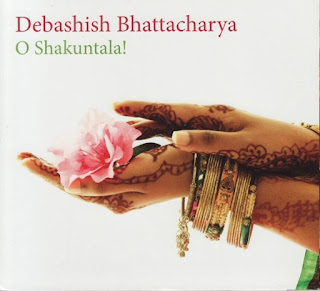 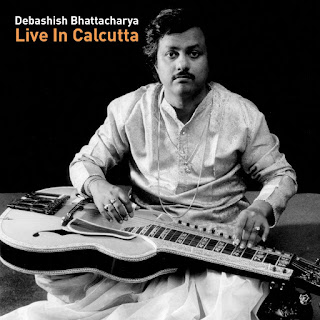 2013  Madeira: If Music Could Intoxicate 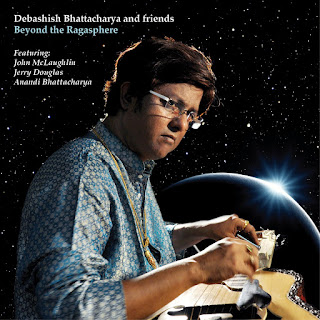 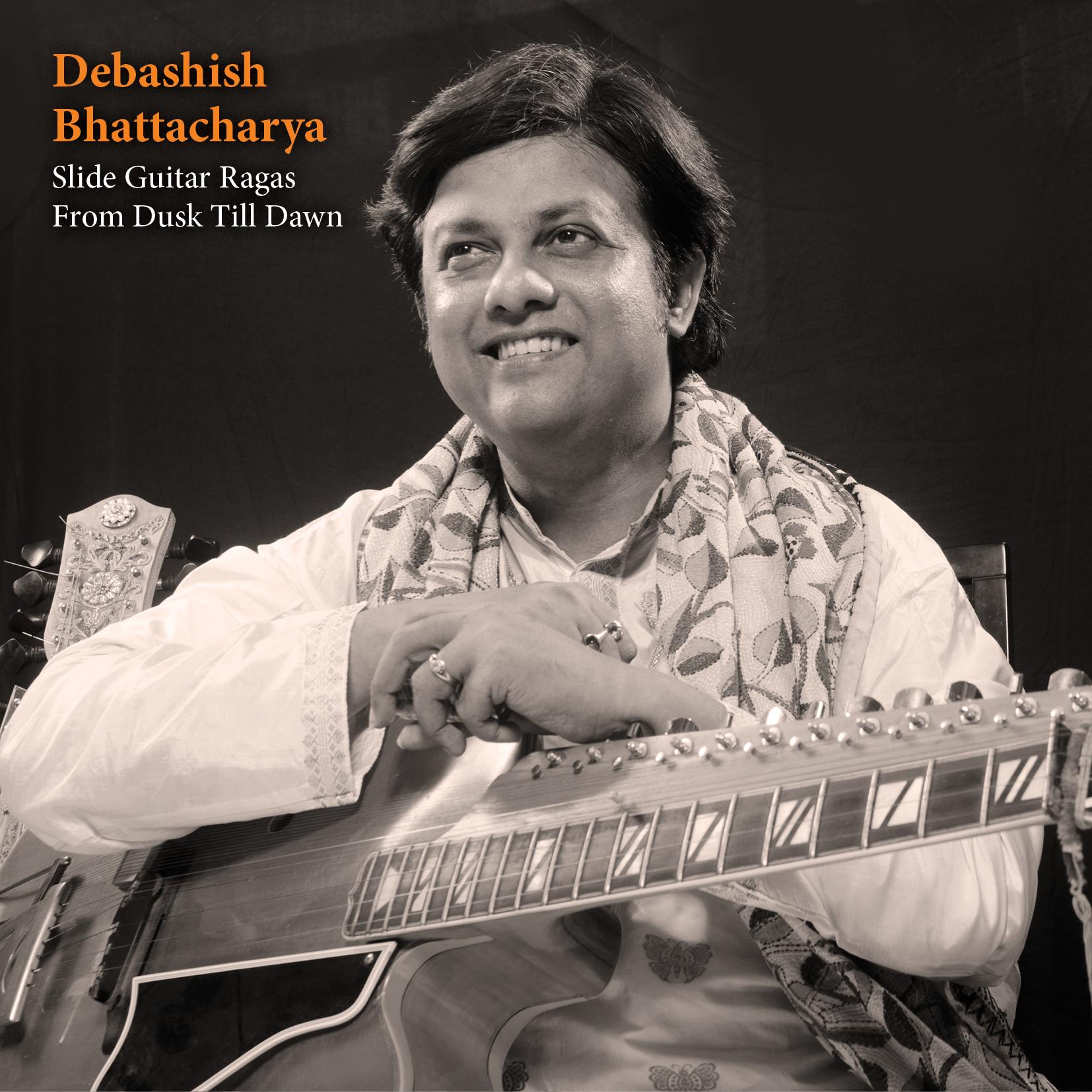 2017 Hawaii To Calcutta: A Tribute To Tau Moe 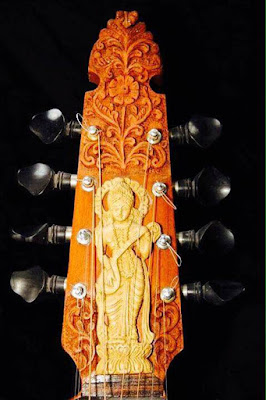 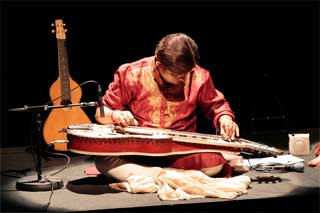