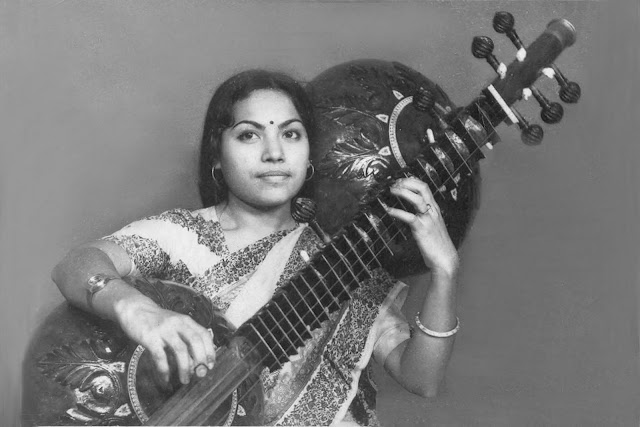 Jyoti's Education in music began at the age of 16 under the guidance of Pandit Late Bindu Madhav Pathak. A marathon study of 15 years in Rudraveena and Sitar increased her thirst for excellence and she underwenttraining in Dhruapad style with Pandit Indhudhar Nirodi. She has taken guidance in Rudraveena by the renowned Rudraveena master Ustad Asad Ali Khan of New Delhi and Ustad Bahauddin Dagar of Mumbai. Guru-Shishya Parampar is manifest in her perfection as a musician and her attitude of homage to the art she has mastered.

Jyoti Hegde has performed on various stages all over India and being a rare lady artist who can play both Sitar and Rudraveena. Rudraveena is world heritage instrument protected and promoted by the UNESCO. The Rudra Veena or the Been is considered the great grandfather of all stringed instruments in the Indian subcontinent.

Awards Jyoti Hegde has won various awards for her performance which include the Naada Nidhi award, Kala Chetana and Dhrupadmani. She has also won various competitions across India like Karavali Utsav, AIR competition etc. Presently now sought after internationally she has performances taking her to various corners of the world.

Vidhushi Jyoti Hegde is one of the first women player of the Rudraveena in the world. She is unique because she has mastered the two instruments which are totally different. When the audience listen Rudraveena, they experience to the treasure of the depth of the Nada-Nidhi or Ocean, and as they listen to the Sitar, they are immersed in the glow of attractive melody. In a motherly manner she considers the two diverse instruments as her two daughters, who need equal attention, love and affection. A steady and rigorous practice towards perfect performance is not the only side in this Vidhushi; she loves experimentation and has organized Jugalbandi and Pancha Sitar programs by her students. Her renown has attracted deciples from India and Abroad. She is also a prolific writer, publishing articles on Rudraveena.


As she starts playing on the lower octaves of the Ragas, the melodious shower of music entices the audience and she gradually, phase by phase, takes them into a trance as the notes lead them, to 'Nada-Samadhi'. It is an experience that is impossible to verbalize. She becomes an enchantress as she takes the audience into confidence with a promise of some great secret and becomes one with the raga and the audience. The audience become spell bound. According to her students, they have a Kaleidoscopic experience, when she guides them. Rudra Veena or the Been, the essence of Nada Yoga

Mythology has it that the Rudra veena was created by Shiva or Rudra. His inspiration was the image of his wife Parvati in deep sleep her hands folded over her chest. This image inspired him to create the Rudra Veena also known as the Been. The Veena was also thus called Parvati veena but it is usually confused by the south indian veena. The Rudra Veena is primarily a large plucked string instrument used in Hindustani Dhrupad music, one of major types of veena played in Indian classical music.

It has a long tubular body with a length ranging between 54 and 62 inches made of wood or bamboo. Two large-sized, round resonators, made of dried and hollowed gourds, are attached under the tube. Twenty-four brass-fitted raised wooden frets are fixed on the tube with the help of wax. There are 4 main strings and 3 chikari strings completes the physical description of this ancient instrument. 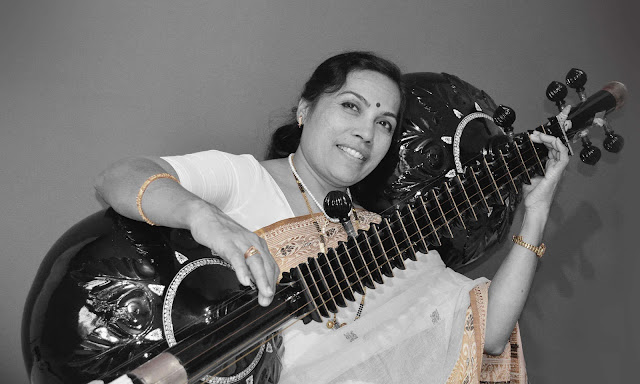 History has it that in the ancient times before the present form was evolved the Veena was made out of animal guts for strings, two gourds and a bamboo tube. Called the Ektantri with one string, later the dvitantri as more strings were added. It was used in the ancient accompaniment of the chanting of the Samveda. The present form came in to its fullness around the 16th century as the Been entered the royal courts of India under the patronage of the kings who were the primary preservers and supporters of the musical lineages of this art.


The Rudra veena is said to be the only instrument that is used for the deeper study of Nad Yoga. Used by ascetic musicians and yogis to attune the mind to still vibrations, it is known to induce deeply transcendental states in an evolved listener or musician. Sound is said to be of two types. According to ancient scriptures there are two types of sound – Aahat and Aanhat "struck" and "unstruck".

The "struck sound" is called so because it is always caused by physical impact when a vibration of air is produced. It is any sound that we hear in nature or man-made sounds, musical and non-musical. The "unstruck sound" is not produced by any physical impact. It is the vibration of the ether, the eternal sound of the Universe, ever present and unchanging. This type of sound can be heard from within by self-realized enlightened persons after many years of meditation and spiritual discipline. The Rudra Veena, though belonging to the "struck" kind of sound, actually represents the "unstruck" eternal vibration of the Universe thus awakening the hearts. 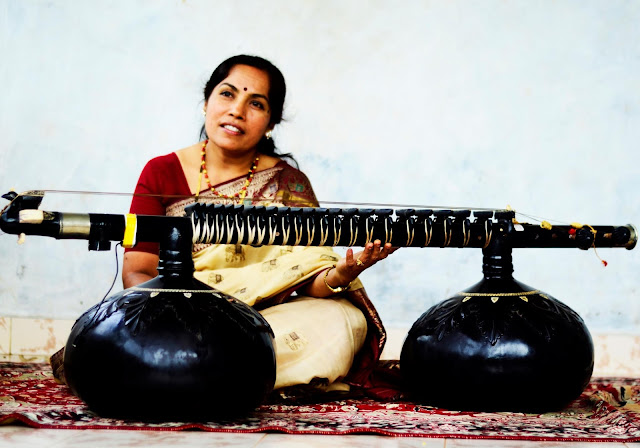 What is interesting to note is that the story of the origin of the veena is itself symbolic. Shiva represents the supreme consciousness; Parvati is representative of the act of creation life itself. The Veena touches upon the stillness of the supreme God consciousness it stirs the depth of one’s spiritual being and attunes us with the eternal form of our self. It is this slow moving intricate subtle development of its music that is the reason that in todays fast paced world people are more used to the entertainment provided by the virtuoso silver finger movement of sitar but the fact remains that the Rudra veena is the mother of all stringed instruments of the indian subcontinent. Each has taken an element from it and developed it further.


Traditionally the Been was played in the traditional pose of the VAJRA Asana. The breathing technique of the player impacting the sound quality. Today there are several techniques of holding the instrument but the essence lies in the traditional pose, if its connection to Yoga is to be understood. The human form sitting in the vajra asana with both the arms extended out left towards the upper part of the veena and the right held close to the bottom gourd can be easily seen to form the swastika sign.

A swastika is symbolic of movement or Gati. Movement can be forward or backwards. In meditation the movement is backwards towards the source of Truth. In life it is forward towards action and Karma. Ancient symbols are to be understood more as symbolic of spiritual significance and not religious. The gourds are placed perfectly in this human Swastika body. The centre of The viberations arising out of the gourds meet exactly at the Marma bindu at the heart centre via the tube that connects the Gourds. This constant hitting at the centre by the viberations arising out of the strumming and pulling the strings laterally are what make it not just an instrument but a YANTRA. 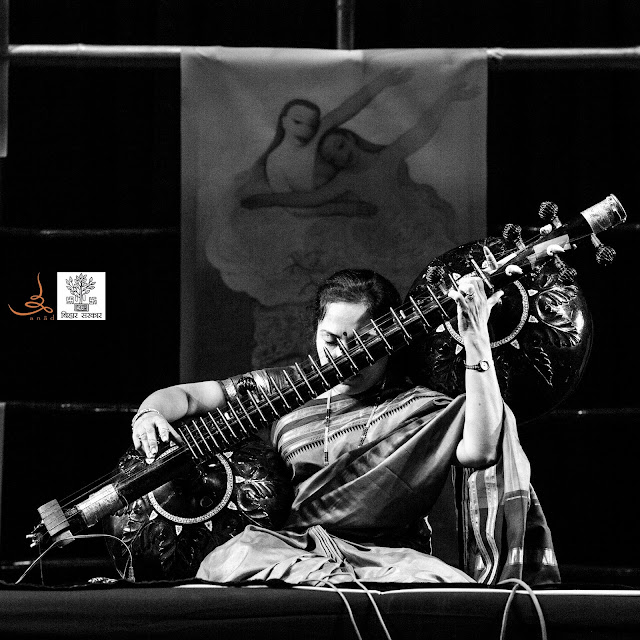 Its an instrument that is worn and not just held on the body. The body of the musician and the instrument act as one. Thus making it extremely difficult to master and requires deep training and years of patience. Over the past few years the Been is gaining ground slowly and there is hope that it will grow due to increased interest in the national and international audience. 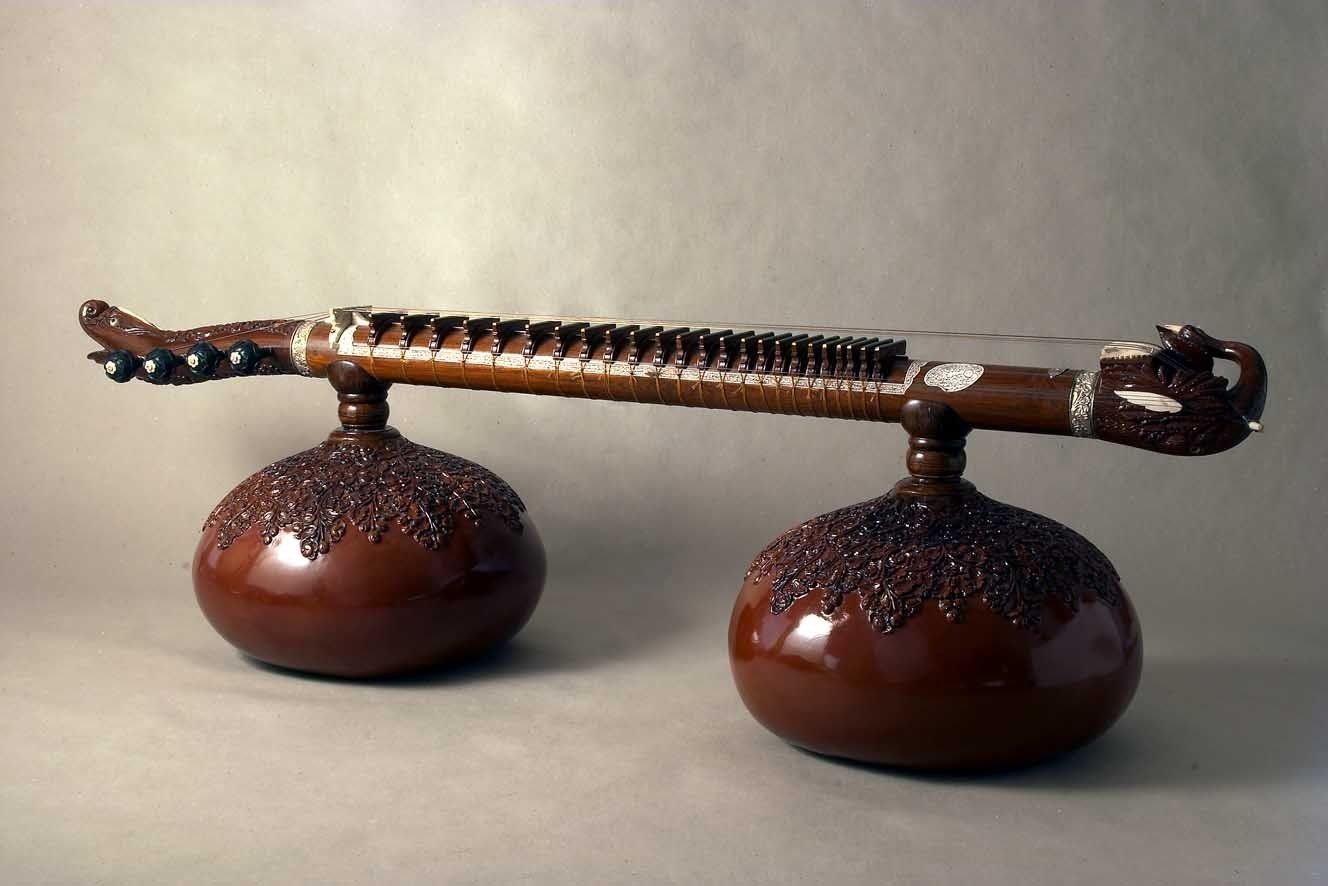