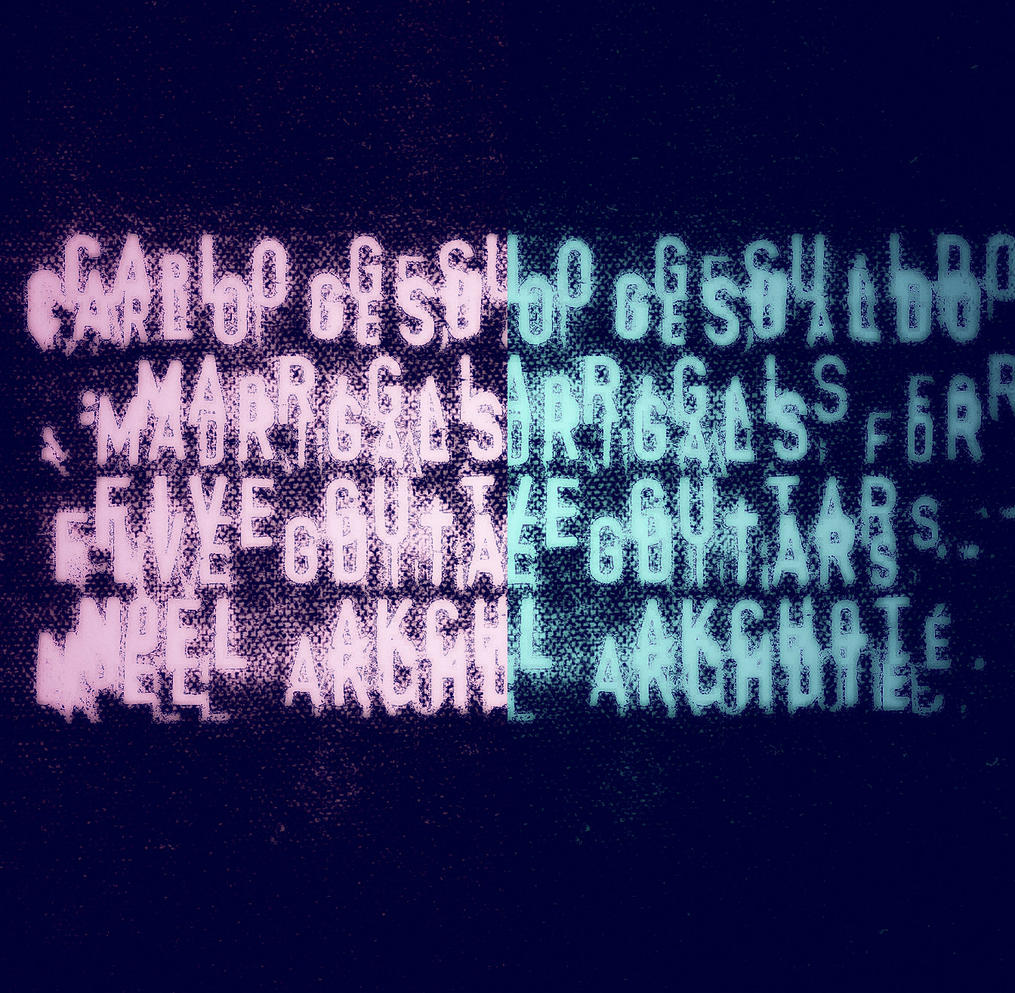 
“Do not deprive me of your pain, since so softly she makes me live and die”


- (#7) Sound: The principle here is that the five original voices remains voices, but are played by guitars (guitarists voices). Its means also that more than factual functions as indicated (and left on these transcriptions as Tenor, Alto, Soprano, etc), the voice is you here. Your own sound, playing, being and presence. As I said above, there is one element of experience here (more than experiments) and this is about how this music will play you in return. The only thing I would like to underline here is that I guess it is a pretty bare experience, to the bone of it all. This would be my main advise or direction about Sound here, let it come close to the core, never try to dress it, let it fall and take you, close to nothing sometime, it will give you a lot back I think. It may undercover, undress, open, eventually reveal too.


- (#2) Notation, Fingerings & Tabs:  I deliberately transcribed and arranged every madrigal in the most organic way for the guitar. Using always the closest to open strings possible neck position (most charts are contained between 5th fret and open strings, or from 0 to 5, with only a few exceptions not exceeding the 7th fret). All dynamics, accents and other expressive notations are left blank as well as all accidents were removed from the key (preferring to remind each as they come through the score, sharp, flat or natural). The reason for it is that I would like we approach this music without any preconceived ideas nor restricted dynamics. I expect this music to guide us and help us find our own interpretation of it.

- (B) Interpretation, (#2) Notation, Fingerings, Tabs: - I deliberately transcribed and arranged every madrigal in the most organic way for the guitar. Using always the closest to open strings possible neck position (most charts are contained between 5th fret and open strings, or from 0 to 5, with only a few exceptions not exceeding the 7th fret). All dynamics, accents and other expressive notations are left blank as well as all accidents were removed from the key (preferring to remind each as they come through the score, sharp, flat or natural). The reason for it is that I would like we approach this music without any preconceived ideas nor restricted dynamics. I expect this music to guide us and help us find our own interpretation of it.

​﻿​Distribution & Text.​
﻿​﻿​- (B – Interpretation): ... His Chromaticism clashes more with the use of pretty traditional forms (almost retrograde for his times). An hyper intimate diary more than any methodical statement. A single voice, his own. Anyway, few years ago it came to term, I had to record his madrigals and all I had was a guitar, so I did it, voice per voice, book after book. There was a very confusing coherence here too, the guitar seemed as natural, appropriate, as plausible as the original five vocal parts. The journey had started, I couldn't stop to play and record this music. It felt so close, flowing through you peacefully, sometime consonant other times very tensed, but always extremely bare and human - “At any rate, he had a single-minded devotion to music from an early age, and showed little interest in anything else. In addition to the lute, he also played the harpsichord and guitar.”

﻿
- (#4) – Long Notes Rests: Few times in the scores you will face pretty extreme durations, or Long Notes (for example a series of whole notes tied up to three of four times). Of course no one will be able to sustain such lengths without the help of an artificial effect (which we don't want here). In such cases, always try to keep your finger in position on the given note (fret) for the whole duration, and this even if the sound starts to fade out half-way through or even before. Stay on the note and let it ring in your head the whole written length, whatever happens physically and sonically - Rests : try to apply the same approach described above for Long Notes to all Rests as well. In these transcriptions, Rests are a musical element. Consider them equally as sound (though mute in action). Try to hear them.
﻿

​
- (#1) Biographical Note: ... Now the character commonly made out of Prince Carlo Gesualdo (and still often confused for) is more of a puppet or a myth, that can well stand next to the ones made of Marquis de Sade, Casanova or Dracula... reading and studying them will shortly show you how radical the misunderstandings are...Anyway. Yes he was very probably suffering an increasing psychosis that climaxed in the end. But Psychosis does not produce any art in real, therefore I don't see any link to be made with this music, or any particular angle of reading to it. This music is like an intimate diary, it shows the life of someone who was taken by music and had like maybe all of us ups and downs, tensions and relieves. To me he was fully aware and conscious of what he did, that's what he meant and I take his word, his own voice in the text on it. Rejecting de facto the Goth-Gore Folklore glued on since.
​

﻿
- (#5) Resonance: Playing in the lowest neck position, using many open strings and a Lowered D tuning will naturally increase Resonance (or sympathetic vibration: an harmonic phenomenon wherein a formerly passive string or vibratory body responds to external vibrations to which it has a harmonic likeness.). Please keep it and let it happen each time it naturally comes, don't try to stop or control it unless obviously too dissonant. Particularly when this phenomenon happens at the end of a played note and continues over a rest, let it ring and sustain until the next note on your chart. Generally, use all natural acoustic feedbacks and avoid or control the electric ones.

- (#1) Tuning: We should all use a Lowered Standard D Tuning (Practically the standard EADGBE tuning goes down a whole step becoming DGCFAD in Concert Pitch. Once we all did that, we should forget about it and continue reading Tabs or Standard Notation Untransposed, meaning that all notes remains on your neck in the same position as if we were all using a Standard E Tuning. The Lowered Standard D Tuning allows a longer sustain (often needed for long notes inside the scores), more resonance as well as a more “Dramatic” tone (I find) - (A - Technical Notes).
​

​
- (#6) Tempi & Conducting: All Tempi are still indicative for now. Generally you could divide them in two main categories, the slower ones and the medium ones. This music holds and generates a unique alchemy, some chords really provoke a physical effect that is hard to explain but very effective. Like above ground, or a living question mark... In such moments, mostly in slow tempi, one could almost start to consider such chords as “pure” sound, close to timeless though measured. The more medium ones are often more phrased, more rhetoric and slightly more “fingery” (still spare). Let's see - ...Today these five voices needs to be impersonated “further”. Five unique individualities, almost five styles and as many worlds.
​

​
The guitar has real chance compared to other instruments, it never could really draw an orthodoxy. Its a rudimentary instrument, tied strings on a slice of wood. Its also a popular instrument, one anybody can pick-up and start. Here it allows us even more to let this music happen, play and ascend. The transcriptions and arrangements I produced (in both standard notation and tablature), are an attempt to reach the core of Gesualdo's music, beyond actual standards and common interpretations since. In fact I have no claim to any legacy, truth or certainty. I only want to share, almost instinctively. I deliberately transcribed each vocal part for guitar in the most organic possible way on the instrument. Meaning a lot of open strings and basic positions (most of it stands below the 5th fret on the guitar). Doing so, each part becomes again a voice. Because it creates a new field for each player, where sounds and fingers can open, where one can let himself be played in return. The text holds us all, allowing multiplicities and differences to speak in polyphony. Also I see no paradox to ask improvisors to share such an experience, expanding the moment from inside rather than through variations. All very natural. What else should I say? It's time to hear it now (A-Introduction). 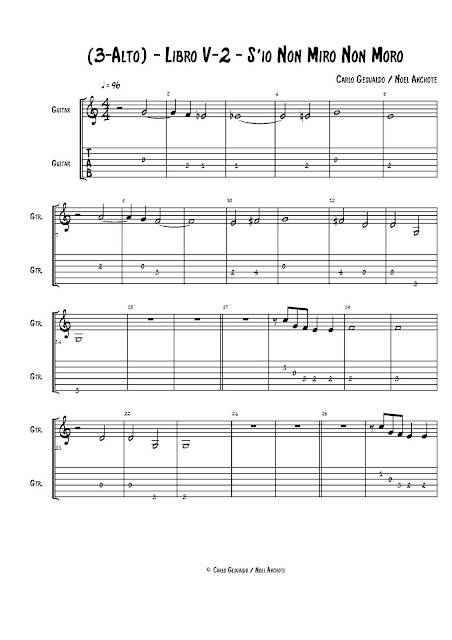 “...and I'm beginning to see the light”
Duke Ellington