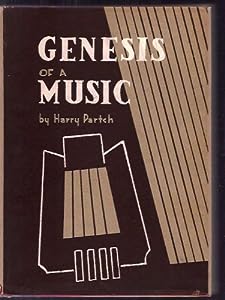 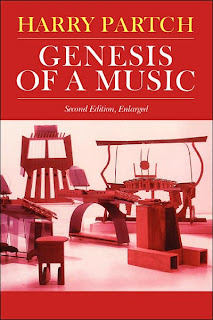 Harry Partch (June 24, 1901 – September 3, 1974) was an American composer, music theorist, and creator of musical instruments. He was one of the first 20th-century composers in the West to work systematically with microtonal scales. He built custom-made instruments in these tunings on which to play his compositions, and described his theory and practice in his book Genesis of a Music (1947).


Partch composed using scales of unequal intervals in just intonation, derived from the natural Harmonic series; these scales allowed for more tones of smaller intervals than in the standard Western tuning, which uses twelve equal intervals to the octave. Partch divided the octave into 43 unequal tones. To play this music, he built a large number of unique instruments, with names such as the Chromelodeon, the Quadrangularis Reversum, and the Zymo-Xyl. 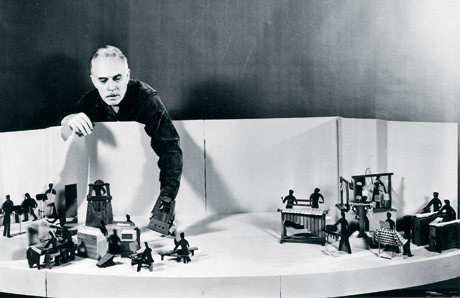 Partch focused on ideals of monophony and corporeality, in contrast to the abstract, polyphonic music prevalent at the time. His earliest compositions were small-scale pieces to be intoned to instrumental backing; his later works were large-scale, integrated theater productions in which he expected each of the performers to sing, dance, speak, and play instruments. Ancient Greek theatre  and Japanese Noh  and kabuki heavily influenced his music theatre.

Partch called himself "a philosophic music-man seduced into carpentry". The path towards Partch's use of a large number of unique instruments was a gradual one. Partch began in the 1920s using traditional instruments, and wrote a string quartet in just intonation (now lost).

He had his first specialized instrument built for him in 1930—the Adapted Viola, a viola with a cello's neck fitted on it. He created the fingerboard in 1928, but it wasn't until two years later while in New Orleans that he hit upon the idea of putting it on a viola's body. 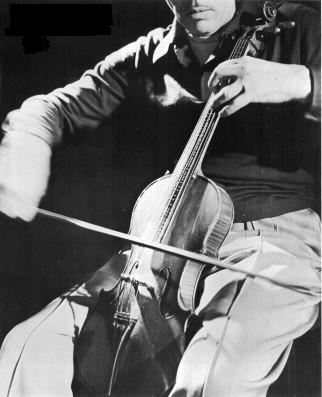 The instrument consists of an average-size viola soundbox with a neck and fingerboard that is six inches longer than usual. The tuning pegs are from a cello, as are all the strings except the first, which is a double-length violin first string. Instead of frets, the fingerboard is marked with a series of brads hammered in beside the strings to mark the various pitches, 37 to the octave at this point in Partch's career. As you can see, the Adapted Viola is played with a bow and the instrument is held between the legs. The Adapted Viola’s range is expanded from the traditional viola to rest between the cello’s and the violin’s.

Partch’s work at this time was mostly compositions for voice accompanied by the new invention, among them the 17 Lyrics of Li Po, settings of Biblical Verses, and Shakespeare. 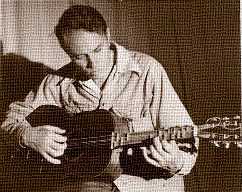 Partch bought and altered his first Adapted Guitar  in 1934 and used it to compose and perform his Americana works Barstow and U.S. Highball. He fitted the guitar with high, stainless-steel frets on a brass plate that was screwed into the neck to aid in tuning the guitar to just intonation.

In 1945, he adapted a guitar with a smooth and narrow fingerboard by adding pinheads and brass rivets and filing them down to be equal to the the fingerboard's level.


That same year, Partch adapted a Hawaiian guitar, complete with a plastic rod to make gliding pitches possible. While the six strings of the first two guitars were tuned in three pairs of octaves (2/1), each a third (5/4) apart, the ten strings of the third guitar are tuned according to one of Partch's hexads. 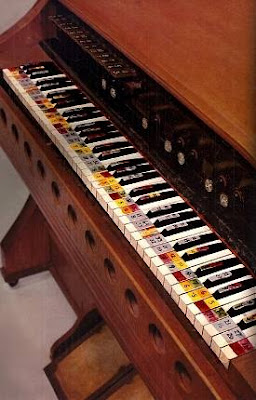 He re-tuned the reeds of several reed organs and labeled the keys with a color code. The first one was called the Ptolemy, in tribute to the ancient music theorist Claudius Ptolemaeus, whose musical scales included ratios of the 11-limit, as Partch's did. The Ptolemy broke during shipping back to the states and he abandoned it in favor of the Chromelodeon. The Chromelodeon is used in most of Partch’s works. It is an old Harmonium that has had all of its reeds removed and retuned to Partch’s original 43-degree monophonic system. The keyboard is only changed in the fact that the keys are painted and the ratios representing their pitch is indicated on the key. Part of the keyboard of the Chromelodeon

In 1938, he built his first Kithara, an alto version of the instrument, and began using it in his Americana compositions almost immediately. It was a large instrument, almost six feet tall, and served him well until 1952, when he restrung and retuned it. In the process of adapting the Kithara I, he realized he wanted more bass resonance, and so, in 1954 in Sausalito, California, he built the seven-foot tall Kithara II as a bass instrument. 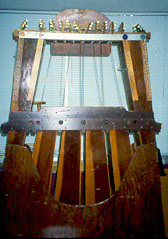 Both Kithara I and Kithara II use seventy-two guitar strings arranged vertically in twelve groups of six strings each. Eight of these hexads are tuned to fixed pitches, while the remaining four use moveable pyrex rods to change the pitches during performance, resulting in a sound similar to that of a slide guitar.

By 1972, he decided to replicate the Kithara I in order to make a stronger, more playable instrument that had increased resonance. As he often remarked, he didn't have 200 years of manufacturing know-how behind him as piano makers do, so he needed a little trial and error to sort things out.
This excerpt is from Partch's And on the Seventh Day Petals Fell in Petaluma and features the Kithara II accompanied by the Marimba Eroica. 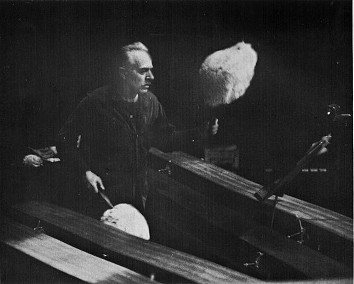 This is one of Partch’s most interesting instruments, a 4 note marimba which produces very low tones. Each note is roughly the size of an upright piano, the resonators being large empty plywood boxes and the block a long redwood timber suspended on foam. The mallets are very large and weigh about 4 pounds each. 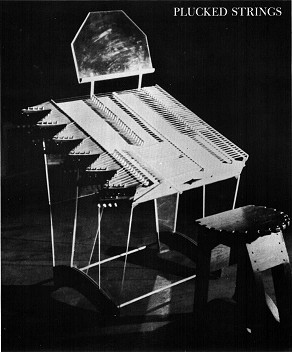 The Harmonic Canon. Built in 1945. Photo by Danlee Mitchell

Is relatively simple in its conception, a rectangular box with 44 strings attached at one end to pegs, and the other to guitar tuners. The strings rest on various movable bridges, allow for great variety in the tuning. It can be played with mallets, picks either plucking individual strings, or strumming glissandos, or with fingers. The original Harmonic canon had 2 sets of 44 strings and a 14” Pyrex rod under the bottom set for further controlling intonation.

When Partch arrived in Madison, Wisconsin, He set to work adding some "rhythmic interest" by creating percussion instruments. One of the first fruits of this new focus was the diamond marimba. 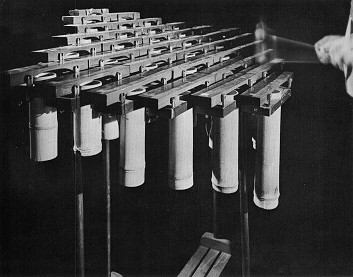 The Diamond Marimba. Built in 1946. Photo by Fred Lyon


Before describing that instrument, We need to make a slight detour. One of Partch's great contributions to microtonal theory was his formulation of the tonality diamond. In the diamond, he took his starting pitch (a G for him) and built chords of six pitches above it following the overtone series to the 11th limit (which he called otonalities) and then built chords of six pitches flipping the overtone series and going down (which he called utonalities). He then arranged these in a diamond shape with the starting pitch (that G) in the middle and the otonalities moving up towards the right and the utonalities moving down towards the right, resulting in 29 pitches altogether. It looks like this:

Right up the middle, you can see the same pitch rendered in the various limits - 1/1, 3/3, 5/5, etc. Recognize this shape? Yes, the diamond marimba is nothing more than the tonality diamond come to life with a few modifications for ease of playing. Partch worked with Warren E. Gilson in Madison to create the instrument, making the blocks out of Brazilian rosewood and Pernambuco, mounting them on thin foam rubber, placing resonators of Brazilian bamboo below the blocks, and holding the entire thing together on a stand of white pine with bronze posts supporting it.

Here's "The Waterfall." You'll hear the diamond marimba make runs as well as the sweeping chords that are its most distinguishing characteristic:

The Quadrangularis Reversum. Built in 1965

Is a later development of Partch’s Diamond Marimba, an instrument that illustrated his theory in its design. “This instrument is the theoretical Tonality Diamond brought to practical tonal life.” The diamond has at its lower point the 1/1 ratio, and extends to the right with Otonalities, and to the left with Utonalities. (the overtone series, Otonality, and its inverse Utonality).

The Bass Marimba.  Built in 1950
Consists of 11 vertical-grain , Sitka-spruce blocks, the longest 53” and the shortest 27”. The resonators are the lower ends of organ pipes with plungers at the closed ends to allow adjustments in the volume of air. Four kinds of mallets are used, as well as the tips of fingers. Occasionally large sheepskin-covered mallets are played directly over the resonators for maximum resonance. Because of the height of the resonators required for good low-end response, the player must stand on a riser to play. 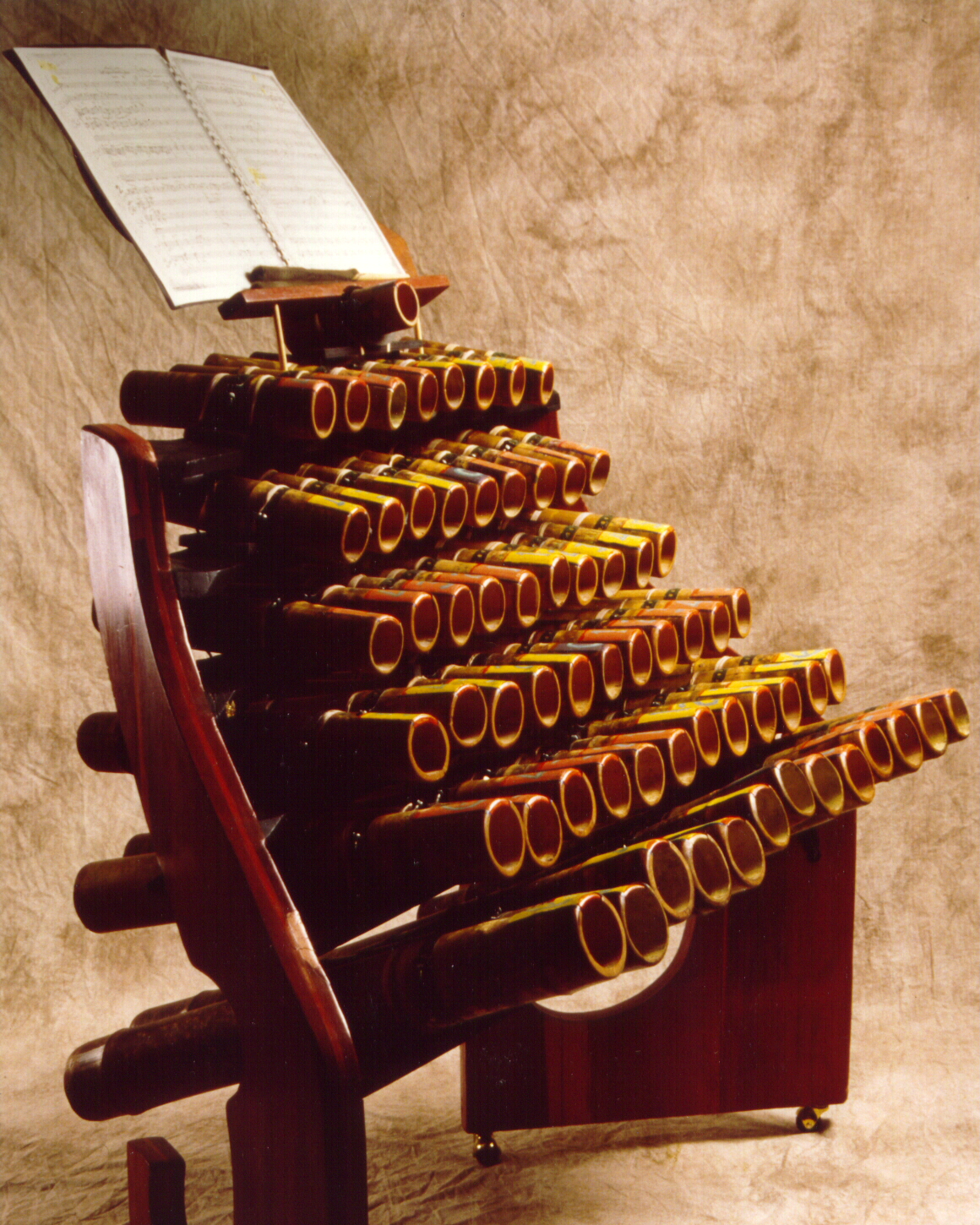 The boos are constructed usually of bamboo with tuned tongues, though the one currently used is made from PVC tubing, and is less prone to tuning fluctuations from the material. The cylinders are laid out in 6 rows, in descending order of size from the bottom to top and mallets are usually used. Boos give “dry sounds, sharp in character and short in duration.”

The Cloud Chamber Bowls are fourteen sections of 12 gallon Pyrex carboys, suspended from a redwood frame in seven vertical lines by rope and s hooks. The original carboys used were found at the Radiation Laboratory glass shop at the University of California, Berkeley in 1950. “I discovered that a very beautiful but complex sound could be produced if the center of a section was suspended by one hand, so that the edge was free, while the other hand struck with fingertips on the edge. As long as my experiments went on, I undoubtedly deprived various faculty wives of many punch and fish bowls.”

The Mazda Marimba is a delicate and soft instrument that is composed of various sized lightbulbs mounted in a frame and resting on foam. “The delightful sounds of the instrument resemble, more than anything else, the bubbling of a coffee percolator.” The Zymo-Xyl is an oak-block xylophone  augmented with tuned liquor and wine bottles, Ford hubcaps, and an aluminum ketchup bottle. The name is from the Greek zymo-  for "fermentation", and xylo-  or xyl- for "wood

Gourd tree witth Cone Gongs.
A dozen Chinese temple bells were bolted to gourds of equal pitches and affixed to a large eucalyptus bough. The two large cone gongs (nose cones from airplane gas tanks) are supported from the floor by a different base.
Throughout his life, Harry Partch was faced with resistance to his revolutionary and controversial ideas. His theories, writings, instruments, music and life can be seen as one unified act of transcendence, subversion and defiance. His struggle was nothing less than the millennia old fight against the expropriation of man through the development of autonomous technology and the destruction of nature. Partch ruled the technology required to complete his creative vision, a vital art, which never compromised its core of primitive sexual impulse, subversive to all systems of indoctrination and those that seek to regiment or commodify the creative spirit.


In 1990, Dean Drummond's Newband became custodians of the original Harry Partch instrument collection, and the group performs with and commissions new pieces for the instruments.The instruments have been housed in the Harry Partch Instrumentarium at Montclair State University in Montclair, New Jersey since 1999. In 2004, the instruments crossed campus into the newly constructed Alexander Kasser Theater, which provides a large studio space in the basement. Concerts by Newband and MSU's Harry Partch Ensemble may be viewed several times a year in this hall. Those who have duplicated partial sets of Partch instruments include John Schneider, whose West Coast ensemble includes replicas of the Kithara, Surrogate Kithara, Cloud-Chamber Bowls, Adapted Guitars, Adapted Viola, Diamond Marimba, Bass Marimba, Chromelodeon, and two Harmonic Canons.