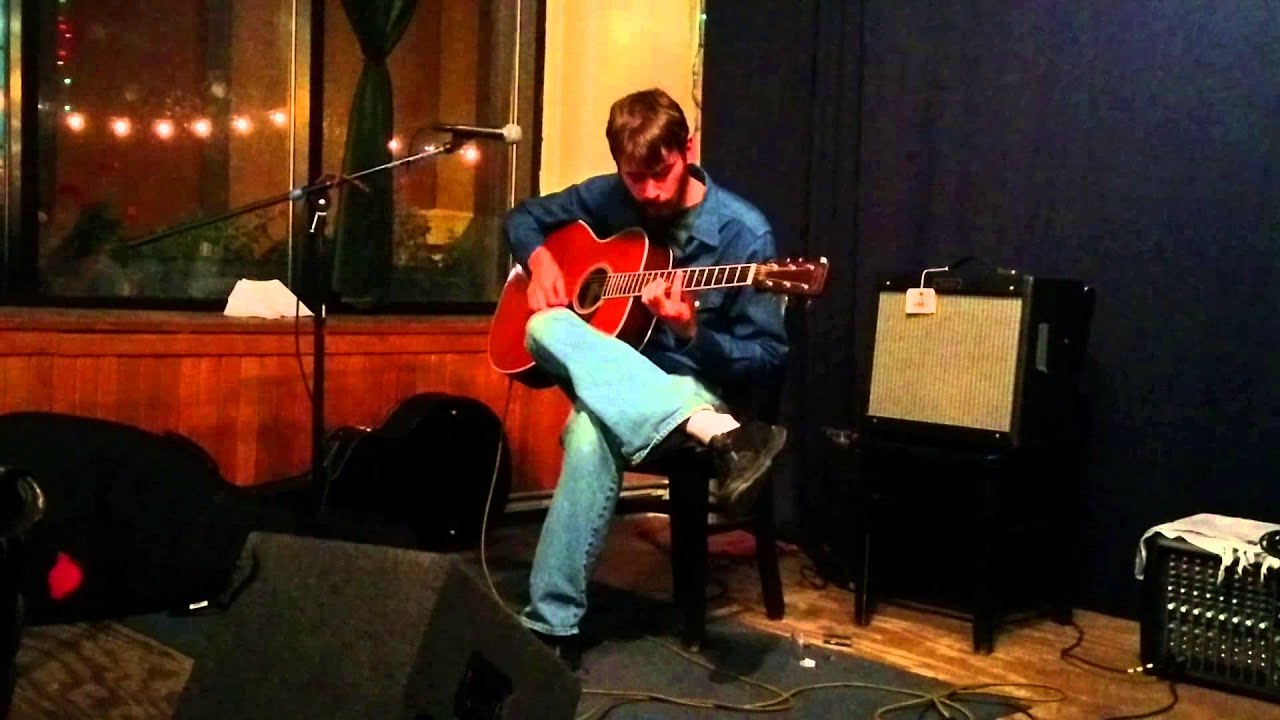 Kyle Fosburg is a gifted, passionate young musician with a large repertoire of original composition and versatile musical genre development. He has acquired advanced guitar skill, vocal ability and old-soul persona uncommon for his 23 years. His refined yet seemingly effortless performances delight, inspire and connect with audiences. From folk-ballads to gospel tunes to pre-war blues to "guitar-painting" to slide guitar (Leo Kottke or John Fahey style) Kyle serves up a tasteful variety of high artistic standard. He has founded his own record label Grass-top Recordings which specializes in reissues and archival preservation of historic/lost music of the last century, as well as features new artists who are paving the way with new musical innovations. Currently they are reissuing "Visions of the Country" by revolutionary guitarist, Robbie Basho. This album was originally issued by Windham Hill in 1978 and was reissued for the first time in August of 2013. His last work is released 6th December 2013  ...'Songs for the Road Home' represents the more nostalgic side of life. It reminds me of how America used to be... - Kyle Fosburgh

What was the first musical sound that you remember?
It's hard to say, but the first sound that really peaked my interest was "Speak To Me/Breath" by Pink Floyd. I was in about the 1st grade when I heard that song. My babysitter played it for me and my bother in the car. The way the steel guitar was used really sent me flying.

What do you expect from music?
Music is the universal language; everybody can identify with it to some degree. If you can tap into shared feelings among all peoples and nations, that's really what it's all about.
For me personally, being a musician is a responsibility, as much as it is something that I simply love. It's hard to say where the independent and mainstream industries will go from here, but I would encourage all musicians and songwriters to hold themselves to the highest standard of artistry. There are a lot of young guitarists out there with high potential, however, if anything but the highest level of artistry is acceptable, then that's a slippery slope. There is a tendency for young artists to be more concerned with quantity rather than quality these days, generally speaking.

So, why do you love the guitar?
The guitar is the most universal instrument, I think. There are so many different variations of the instrument itself, styles of play, etc. The possibilities really are limitless.

Which work of your own are you most proud of, and why?
As far as solo guitar is concerned, I think my favorite piece I've recorded is "Every Child Born", off my second album. But I have a song coming out on my new album called "Snow Is Gently Falling" and I think it's also one of my best compositions. It's sort of like comparing apples and oranges though, as the tracks are very different in nature.

Do you play electric and acoustic, do you approach the two differently?
I have utilized both in my work, but as of recently I've decided to sell my electric guitar and focus solely on acoustic music. I have a tendency to spread myself thin. I think it's better to focus on mastering the acoustic 6 and 12-string guitar. The electric guitar made more sense when I was playing in bands. Now it has become more like a friendly distraction. In this case, I actually need to eliminate certain things in order to grow as an artist.


What is the main border, the main drawback of the guitar?
It's bigger than a harmonica or violin, but that's about it! I can't complain about such a transportable, universally accepted, and versatile instrument. What do you change or add to your guitar?
I added a KandK pick-up in each of my two main acoustics (6 and 12-string). This gives me the option between micing the guitar or plugging directly in for live shows. The pickups I had installed utilize the reverberation off the top of the guitar, as they mount on the inside top of the guitar. KandKs produce a truer sound to the original acoustics of the instrument (IMO), oppose to the pickups that simply mic the inside of the guitar.

What’s the difference between a good guitar and a bad guitar?
Regarding acoustic guitars, the main difference is playability, if you have an intuitive understanding on how to utilize the tones of the instrument. If you know how to touch a guitar  you can make a $100 instrument sound like a $1500 instrument. Don't believe all this nonsense about having to own a nice guitar -- All those old blues and Gospel guys played cheap guitars.  We still listen to their music because of the artistic quality, not because of the guitars they played. Every guitarist wants to own one guitar they're proud of, and that makes sense. But it's often times overlooked just how good a "bad" guitar can sound with the right technique.


What are the challenges and benefits of today's digital music scene?
The big challenge for artists and promoters alike is weeding out/sifting through all the bad music. We live in an age now where anyone can share anything. So many artists think their music is the bees knees and assume everyone else cares about it as much as they do. You have to focus on your craft rather than promoting your brains out. If you make top notch music, people will eventually find you and support you. The music comes first. Promote intelligently and be respectful of those who have worked hard within the industry. Don't assume anyone cares about what you're doing. Be confident in the product you're putting out there. It's infinitely more valuable for you to believe in your music than to worry about what anyone else thinks.
“Public opinion is a weak tyrant compared with our own private opinion. what a man thinks of himself, that it is which determines, or rather indicates, his fate.” - Henry Thoreau

Define the sound you're still looking for.
In a general sense, I'm still trying to tie all of my interests into one creative process of making music. There is a whole world of musical tradition/culture out there. Naturally, it's going to take more than 23 years to find it all and develop my own styles from everything I discover.  It's difficult to have such an expansive interest while maintaining a disciplined focus. It's the process of living, learning, and growing. Music comes from the heart first and foremost. Why and how do you use extended techniques in guitar?
I have the vision first. For instance, if I see the ocean floating around me, I try to let that feeling or image come into me and direct the music coming out of me. It's not a mental exercise, but a willingness to let the soul guide you. I paint pictures and represent ideas through the guitar.

Which living artist would you like to collaborate with?
Nick Jonah Davis (we are currently working on an EP)
Hayden Pedigo -- Hayden has a broad musical understanding/interest, and he is my best friend. We've had some great collaborative efforts in the past and I look forward to many more, God willing.
Derek Gripper -- Derek is a phenomenal guitarist and composer. I'd like to work with him someday.
Steffen Basho-Junghans --  Steffen is the only musician I know who could characterize the forming of ice crystals through his guitar playing.

What dead artist would you like to have collaborated with?
Robbie Basho!!!

What’s your latest project about?
Song for the Road Home (my third full length album) will be out in just a few days. It's different than what I've released in the past. I'm excited about it and I certainly hope everyone enjoys the album! It's going to feature a mix of full band material and solo guitar compositions.