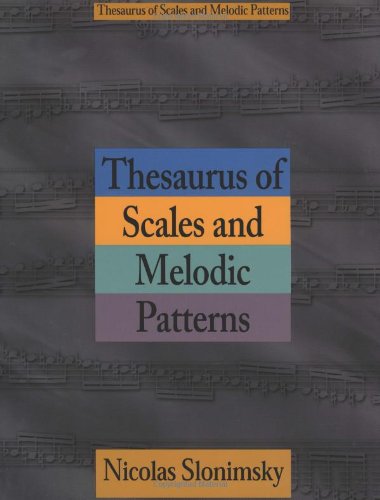 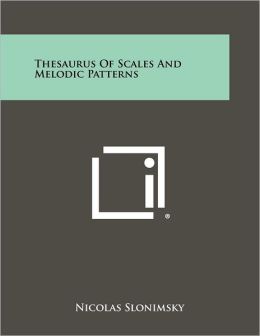 Nicolas Slonimsky (April 27 [O.S. April 15] 1894 – December 25, 1995), born Nikolai Leonidovich Slonimskiy (Russian: Никола́й Леони́дович Сло́нимский), was a Russian-born American conductor, author, pianist, composer and lexicographer. Best known for his writing and musical reference work, he wrote theThesaurus of Scales and Melodic Patterns and the Lexicon of Musical Invective, and edited Baker's Biographical Dictionary of Musicians.
Originally released in 1947, the Nicolas SlonimskyThesaurus of Scales and Melodic Patterns is one of the most prized music books ever published – cherished by such greats as Arnold Schoenberg, Virgil Thomson, John Coltrane, Frank Zappa and Freddie Hubbard for its comprehensive vocabulary of scales and patterns ideal for invigorating compositions and improvisation.
Whether you’re a Jazz guitarist, Metal player, Djent aficionado or interested in extended techniques and advanced music theory regardless of the genre, this is the ideal book for you. Break out of the standard Blues and pentatonic scales with chapters ranging from tri-tone scales covering one octave split into two parts all the way up to Sesquiquinquetone patterns that span eleven octaves in twelve parts!
Nicolas Slonimsky and Frank Zappa
Frank Zappa is one of the most notable guitarist fans of Slonimsky’s original book, who used the immense knowledge and variety of its contents to invigorate his already highly developed approach to the instrument. The legendary Jazz Rock composer-guitarist even met and played with Slonimsky who he greatly admired. 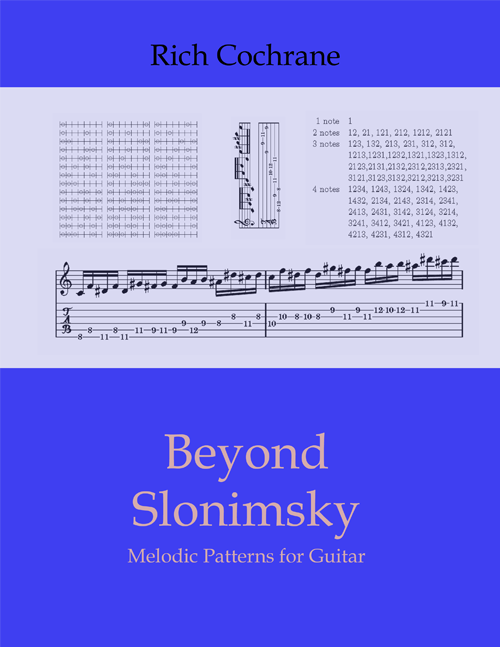 Beyond Slonimsky: Melodic Patterns for Guitar

Thanks to Richard Cochrane
http://cochranemusic.com/slonimsky-guitar-book
Download the entire book COMPLETELY FREE!
Nicolas Slonimsky's Thesaurus of Scales and Melodic Patterns is a legendary book that has influenced musicians as diverse as John Coltrane, Jaco Pastorius, Frank Zappa and Buckethead. Many guitarists (and others) own a copy, but few have got much advantage from it. Even advanced players claim it's difficult to use, dry and dauntingly long. This free, 400-page ebook is designed to help in three distinct ways.

The first is that is gives a completely new account of the theory behind the first twelve chapters of the Thesaurus, the most widely-used and systematic part of the book. This is done in a clean, modern and rigorous way that completely does away with Slonimsky's quirky and offputting terminology and that significantly extends his original idea. Furthermore, it's designed to show you how to understand the resulting patterns from the inside out, enabling you to come up with your own and even do so on the fly, without any prior preparation.

The second is that the resulting patterns -- which are similar, but not identical, to those contained in the Thesaurus are organised by the pitches they contain rather than Slonimsky's theoretically-pleasing but abstract octave divisions. This makes them much easier for most contemporary musicians to apply to real-life situations. To make them even more practical, all examples are presented in traditional notation and tablature, making the book very easy for guitarists to experiment with quickly and easily.

The third is that the book extends the Slonimsky's "recipe" to "non-symmetrical bases", and presents a selection from the almost unlimited possibilities this makes available.
Slonimsky's Thesaurus is one of the most talked-about books in music. Maybe you even have your own copy, gathering dust somewhere. Beyond Slonimsky will encourage you to get it out and start using it in a more practical way than ever before.
Download the free PDF now.

by Nicolas Slonimsky
Buy this book on Amazon.com
Book Description
“A supermarket tabloid of classical music criticism.”–from the new foreword by Peter Schickele. A snakeful of critical venom aimed at the composers and the classics of nineteenth- and twentieth-century music. Who wrote advanced cat music? What commonplace theme is very much like Yankee Doodle? Which composer is a scoundrel and a giftless bastard? What opera would His Satanic Majesty turn out? Whose name suggests fierce whiskers stained with vodka? And finally, what third movement begins with a dog howling at midnight, then imitates the regurgitations of the less-refined or lower-middle-class type of water-closet cistern, and ends with the cello reproducing the screech of an ungreased wheelbarrow? For the answers to these and other questions, readers need only consult the “Invecticon” at the back of this inspired book and then turn to the full passage, in all its vituperation. Among the eminent reviewers are George Bernard Shaw, Virgil Thomson, Hans von Bulow, Friedrich Nietzsche, Eduard Hanslick, Olin Downes, Deems Taylor, Paul Rosenfeld, and Oscar Wilde. Itself a classic, this collection of nasty barbs about composers and their works, culled mostly from contemporaneous newspapers and magazines, makes for hilarious reading and belongs on the shelf of everyone who loves–or hates–classical music. With a new foreword by Peter Schickele (“P.D.Q. Bach”).

Thesaurus of Scales and Melodic Patterns

by Nicolas Slonimsky
Buy this book on Amazon.com
Book Description
Since its publication in 1947, great musicians and composers of all genres – from Arnold Schoenberg and Virgil Thomson to John Coltrane and Freddie Hubbard – have sworn by this legendary volume and its comprehensive vocabulary of melodic patterns for composition and improvisation.

by Nicolas Slonimsky
Buy this book on Amazon.com
Book Description
The life of pianist, composer, conductor, and musical lexicographer Nicolas Slonimsky encompassed nearly all of 20th-century music history. His 1988 autobiography, newly expanded by his daughter Electra Yourke, tells the fascinating story of his journey from his native Russia to France and the United States, where he became known as a champion of modern music.

The Listener’s Companion: Great Composers and Their Works

Nicolas Slonimsky, Electra Yourke
Buy this book on Amazon.com
Book Description
Renowned for his literary style as well as his musical scholarship, Nicolas Slonimsky wrote many program notes and articles for newspapers and other periodicals, in addition to his well-known books. These shorter writings, edited by Slonimsky’s daughter, Electra Yourke, are collected for the first time in this excellent introduction to the classical repertoire, from Bach to Shostakovich. Arranged chronologically by composer, the chapters begin with biographical sketches and go on to describe some of each composer’s most popular and imporant works.

Writings on Music: Volume One Early Articles for the Boston Evening Transcript

Writings on Music: Volume ThreeMusic of the Modern Era

Volume 3 of a 4 Volume Set
by Nicolas Slonimsky by Nicolas Slonimsky
Buy this book on Amazon.com
Amazon.com Book Description
Nicolas Slonimsky’s first edition of Music Since 1900 came out in 1937–his entry into the world of lexicography–and this fifth edition, published in 1994, was the last book he wrote. But that’s only one reason why this book should be acquired, cherished, and continually browsed. The “Descriptive Chronology” begins January 1, 1900, with the publication of Hector Berlioz’s first volume of collected works, wends its way through Gershwin’s first performance of “Rhapsody in Blue” (February 12, 1924) and the founding of the Polish Music Publishing Society (April 15, 1945), and ends with the death of Ernst Krenek, composer of “Jonny spielt auf,” (December 23, 1991). With letters (such as those to Slonimsky from Charles Ives) and documents (such as the transcript of the House Un-American Activities Committee hearing on Hanns Eisler), a Dictionary of Terms (abecedarianism to Zen), and a comprehensive index, the result is a scrupulous, eccentric, irresistible music reference.

Supplement to Music Since 1900

by Nicolas Slonimsky, Robert Bonotto (Illustrator)
Buy this book on Amazon.com
Buy this book from Routledge
Book Description
Quirky anecdotes and observations abound in this volume now published by Routledge. Enter a surreal and humorous world of medicinal music, musical schizophrenia, conductorless orchestras, suing seals, cat operas, musical beds and more. Let Slonimsky regale you with tales of Mozart, Beethoven, Rossini and the other expected Classical Music figures, the ugly ducking of Russian music, the Kafka of modern music and other sublime misfits. First published in 1948, this book has earned well-deserved acclaim for being insightful, witty and enthralling. Charming illustrations by Robert Bonotto complete this superb collection of musical vignettes. by Boris de Schloezer (1987), translated from the French and with a foreword by Nicolas Slonimsky
Book Description
As its title indicates, this volume is a reduced version of the classic Baker’s, the gold standard of musical lexicography. It retains all the detailed history and authoritative analysis of its parent volume at somewhat lesser length, but every word carries Slonimsky’s distinctive style and attention to factual detail. by Nicolas Slonimsky, Richard Kassel (Editor)
Buy this book on Amazon.com
Amazon.com Book Description
It’s sad but nonetheless true that Nicolas Slonimsky died in 1995, yet the 1997 Dictionary of Music is thoroughly Slonimsky. It includes all the material written for his Lectionary of Music (that was expunged by editors), and then some. After Slonimsky’s death, Schirmer Book editors reconstructed his work (using original manuscripts) and added hundreds of Slonimsky articles for a new, comprehensive, mostly Slonimsky dictionary of music. The result is that most deadly of dictionaries: the text that can’t be put down. From Slonimsky’s highly entertaining introduction to the A to Z itself–1,171 pages of musical definitions, biographies, and Slonimsky storytelling–this is a rare volume that both instructs and amuses.

The Road to Music

A Thing or Two About Music

by Nicolas Slonimsky, Richard Kostelanetz (Editor), Joseph Darby
Buy this book on Amazon.com
Book Description from Library Journal
Editor Kostelanetz has collected some of Slonimsky’s greatest articles, biographies, musical definitions, and observations of the 20th century. As a composer, conductor, and prolific writer, Slonimsky virtually defines 20th-century musical scholarship with his well-known editorial work in Baker’s Biographical Dictionary of Musicians ( LJ 1/92), as well as numerous other books and journal articles. The new work presents a broad enough view of music, in both historical scope and content, to appeal to both musician and music lover. Slonimsky’s famous sense of humor emerges in full force, especially in biographical pieces on popular musicians like Frank Zappa and Frank Sinatra. The inclusion of such items as Slonimsky’s timeline of 20th-century opera libretti and his infamous censorship lecture, “Sex and the Music Librarian,” gives some idea of the all-inclusive nature of the book. Recommended for public libraries and academic libraries from the high school to the graduate level.
- James E. Perone, Canisius Coll., Buffalo, N.Y.
Copyright 1994 Reed Business Information, Inc.