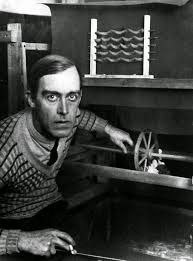 Walter Ruttmann (28 December 1887 – 15 July 1941) was a German film director and along with Hans Richter,Viking Eggeling and Oskar Fischinger was an early German practitioner of experimental film.

Ruttmann was born in Frankfurt am Main; he studied architecture and painting and worked as a graphic designer. His film career began in the early 1920s. His first abstract short films, "Lichtspiel: Opus I" (1921) and "Opus II" (1923), were experiments with new forms of film expression, and the influence of these early abstract films can be seen in some of the early work of Oskar Fischinger. Ruttmann and his colleagues of the avant garde movement enriched the language of film as a medium with new form techniques.

Ruttmann was a prominent exponent of both avant-garde art and music. His early abstractions played at the 1929 Baden-Baden Festival to international acclaim despite their being almost eight years old. Ruttmann licensed a Wax Slicing machine from Oskar Fischinger to create special effects for Lotte Reiniger. Together with Erwin Piscator, he worked on the experimental film Melodie der Welt (1929), though he is best remembered for Berlin: Die Sinfonie der Großstadt (Berlin: Symphony of a Great City, 1927).

During the Nazi period he worked as an assistant to director Leni Riefenstal on Triumph of the will (1935). He died in Berlin of wounds sustained when he was working on the front line as a war photographer.

Berlin: Symphony of a Metropolis is a 1927 German film directed by Walter Ruttmann, co-written by Carl Mayer and Karl Freund.
The film is an example of the city symphony film genre. A musical score for an orchestra to accompany the silent film was written by Edmund Meisel. As a "city symphony" film, it portrays the life of a city, mainly through visual impressions in a semi-documentary style, without the narrative content of more mainstream films, though the sequencing of events can imply a kind of loose theme or impression of the city's daily life.

This film represented a sort of break from Ruttmann's earlier "Absolute films" which were abstract. Some of Vertov's earlier films have been cited as influential on Ruttmann's approach to this film, and it seems the filmmakers mutually inspired one another, as there exist many parallels between this film and the later Man With a Movie Camera.

The film displays the filmmaker's knowledge of Soviet montage theory. Some socialist political sympathies, or identification with the underclass can be inferred from a few of the edits in the film, though critics have suggested that either Ruttmann avoided a strong position, or else he pursued his aesthetic interests to the extent that they diminished the potential for political content. Ruttmann's own description of the film suggests that his motives were predominantly aesthetic: "Since I began in the cinema, I had the idea of making something out of life, of creating a symphonic film out of the millions of energies that comprise the life of a big city."

These films were conceived of in the mid to late 1920's amongst the "artistic" writers and filmmakers (Usually when gathered in open coffeehouse discussions as they toiled at their craft) as an avant-garde, "new style" of early filmmaking that evolved from a script-free open narrative form that sought to show a clearer, less cluttered view of the world free from a real storyline or rigid structure. Although these films were often edited to give them some structure and a pleasing aesthetic value they evolved into what was later the "travelogue" film which also remained popular for a time. What made them very popular for urban audiences was that these films were often shot in their home cities showing easily recognizable landmarks and if one was lucky enough he or she may see someone they know up on the big screen or even get to see themselves on film.

What is critically interesting about this particular film shot in Berlin, Germany is the timeframe in which it was made; which was years before any real Nazi influence and well before Joseph Goebbels' Propaganda Ministry took over all German film production which stalled true creativity and forced the most artistic talent from the country. It is also very significant that in watching this film today that it is watched not for its onetime artistic or style value but as a type of filmed "time-capsule" an invaluable historical filmed record of the great city of Berlin in the mid to late 1920's which no longer exists today. Over 30% of central Berlin was leveled during the Allied bombing campaigns at the end of world War II changing the face of old Berlin forever.

According to Ruttmann, a "hypersensitive film stock" was developed for use in this film, to solve lighting difficulties during night scenes.
In 2007, a restored version of the film was shown with the fully reconstructed original score by Edmund Meisel. The premiere of this version took place at Berlin's Friedrichstadtpalast on September 24, 2007, with live orchestral accompaniment by the Rundfunk-Sinfonieorchester Berlin.

The Berlin-based electronic duo Tronthaim have performed their new audio dubbing to the film at numerous European cultural festivals, including "Notti d’Estate" in Florence and at the "Salon du livre" in Paris.
A score by Timothy Brock was made for the film in 1993.

The film was re-scored by DJ Spooky at The Tate Modern in 2006 as one of the first performances of the museum to focus on live, large scale experimental cinema using the Turbine Hall.
Spanish composer Alberto Novoa Rodriguez recorded an electro-symphonic soundtrack for this film in 2009. He performed at the Babylon Cinema in Berlin with 15 musicians from a young musical group (Agrupación Musical da Limia. Xinzo de Limia). The album was recorded by members of the Symphony Orchestra of Galicia

Premiered in 1921, Ruttmann’s ''Opus 1'' is the first abstract or «absolute» work in film history. Instead of containing depictions of reality, it consists entirely of the colors and shapes already formulated in Ruttmann’s ''Painting With Light'' manifesto. In 1919, he writes that, after nearly a decade, he finally «masters the technical difficulties» struggled with as early as 1913 while executing his formulated idea. He also writes that one has to ''work with film as though using a paintbrush and paint''. Up to protecting his work by a patent in 1920, this artistically-motivated necessity born of new technical means leads to Ruttmann producing abstract and painterly image sequences in his films.

Following the neglected ''Opus 1'' come three other purely abstract films. These too, are painstakingly colored by hand. That each film has an original score composed especially for its production highlights another difference to the absolute films of Hans Richter or Oskar Fischinger, which transposed in images music that already existed.


Ruttmann continued with an Opus 2 in 1922 and, in connection with Lotte Reiniger's Prince Achmed, completed Opus 3 and Opus 4 in Berlin during 1923 and 1924.

An impression of the state of the world in 1929, contrasting similarities and differences in religion, customs, art and entertainment from all over the world. The film is constructed like a symphony.

Advertisement for Kantorowicz-Liköre, made with Julius Pinschewer. Score by Joachim Bärenz (2008)

Radioplay/film for the ear realized in 1930 and produced by Reichsrundfunk Gesellschaft with Berliner Funkstunde.
First broadcast 15 May 1930 in Berlin.  Presented 3 June 1930, in the "radioplays and sound films" programme.  Presented to the second international congress of independent film in Brussels, December 1930.  Thanks to Michel Chion for his assistance, and Eva Riehl who allowed the realisation of this disc.

Weekend is a pioneering work from the early days of radio, commissioned in 1928 by Berlin Radio Hour. In a collage of words, music fragments and sounds, the film-maker and media artist Walter Ruttmann presented on 13 June 1930 a radically innovative radio piece: an acoustic picture of a Berlin weekend urban landscape. Before making Weekend, Ruttmann had produced the experimental documentary Berlin-Symphony of a Great City (1927) as well as a number of short, experimental abstract animations. After his experience with his films, Ruttmann deliberately sought possibilities for producing an audio-film for radio. "Everything audible in the world becomes material," he wrote in a manifesto in 1929, prefiguring Schaeffer, Varese, Cage and the other giants of the musical avant-garde. Tones and sounds should exist in their own right. For Weekend they were recorded as arbitrary and intentional elements on the soundtrack of an optical sound film using the so-called Tri-Ergon process. For the first time an artistic radio production was created whose material could be assembled and designed according to rhythmic, musical principles. The original of Weekend was long considered lost. A copy was only rediscovered in New York in 1978.