The film Rashomon by Akira Kurosawa was shown with the sound turned down. The audience was asked to read the subtitles aloud, together. The purpose of the piece is to take the audience members out of their usually passive roles as observers and to become active participants, aware of the people surrounding them and and their own power of speech--not merely awed and muted by the "miracles" of light and sound projected in front of them on the screen. The audience created the soundtrack, not simply letting a pre-programmed soundtrack created by unseen hands wash over them. No film screening like this had ever taken place before in the 100+ year history of cinema. However, it should be noted that of the dozen or so attendees, only five or six (including myself, Bradley Eros of Robert Beck, and the projectionist) actually read the subtitles out loud. So, given the opportunity to entertain-or govern, as it were-themselves only half the populace took advantage of it. Much like voter turnout, or America's 50/50 approval/disapproval split when the Iraq war began.

It was a totally reflexive experience. Just as each character in the film relates his or her own version of the rape and murder, each member of the audience read the subtitles in their own way, with their own inflections, pronunciations, and pacing. Some were trying to be dramatic, some not-in essence they were creating their own versions of the story in real time. The female medium in the film takes on the voice of the dead husband; the audience took on the voices of all the actors. Like the Ono piece, a natural delay effect was created because people read at different speeds, and would start reading at slightly different times depending on quickly they reacted to seeing the words on screen (and remembering that they were supposed to read out loud). Like many of my instrumental pieces, it was partially composed, partially improvised. The instructions were simple, and I made no attempt to direct the reading in any way. So the attempts to be funny, and the dynamics of the volume level of the reading at different times, were improvised by the audience members-seemingly intuitively, perhaps depending on how engrossed they were by the story at any given point, or maybe how bored they were. 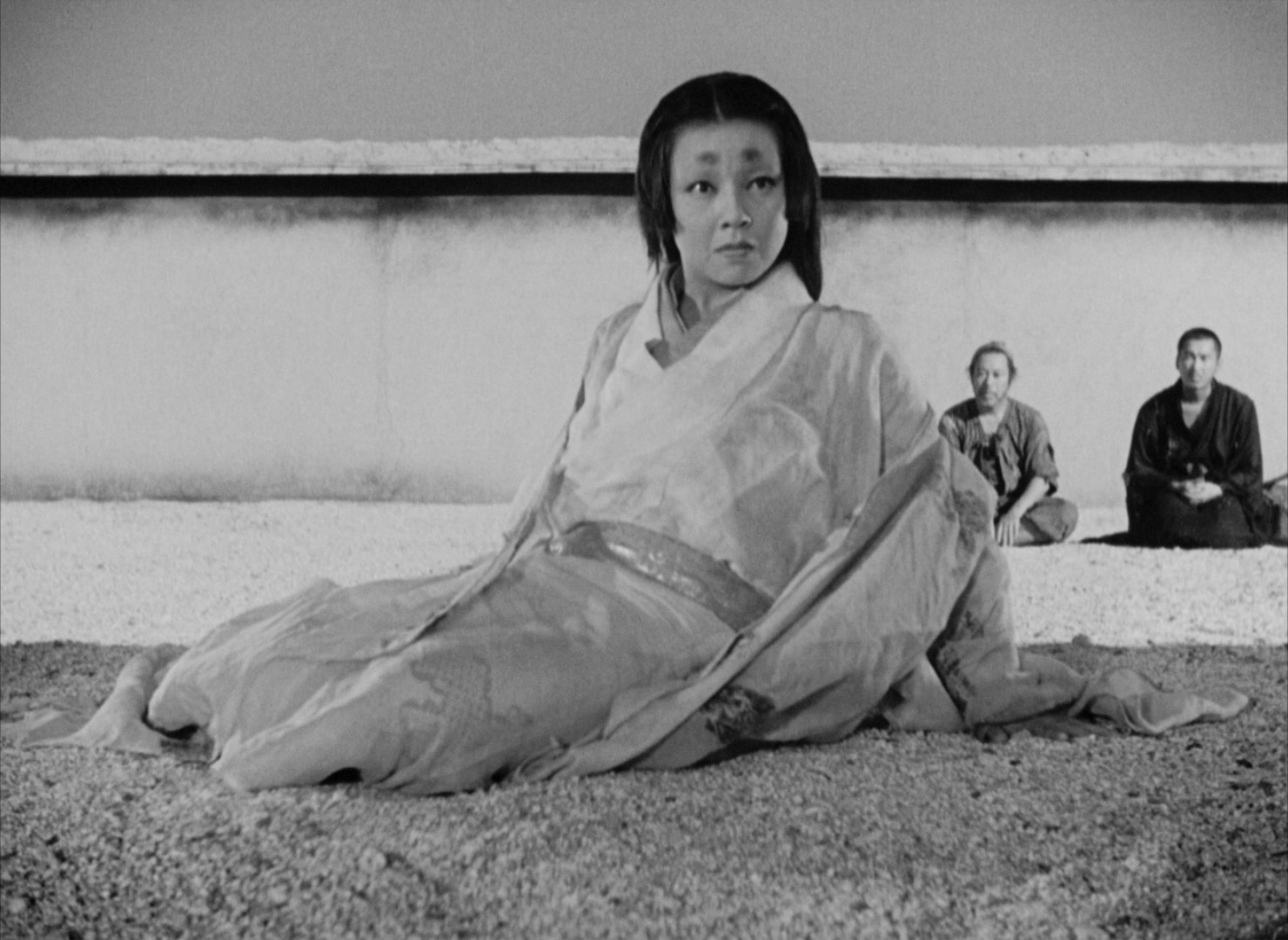 Rashomon Piece was a tremendously spartan experience, stripping away the intended manipulation by the soundtrack, and returning the audience to the most primitive movie experience imaginable-totally silent film. There was a heightened awareness of the images as pure cinema, like the films of Stan Brakhage; with the sound out you could also see how much of the story Kurosawa was conveying purely visually, which was fascinating. There was also a heightened sense of awareness of sounds both inside and outside the theatre, particularly noises and conversations occurring on the street outside. The audience wasn't subsumed by the film, they were engrossed by it yet still aware of reality and the outside world. A total consciousness of both fantasy and reality. This is like Jean Marie Straub's film of Othon, in which the play is performed by actors in period dress in ancient ruins in Rome, yet the daily activities of modern Rome, which took place as the film was being shot, are clearly visible in the background of every shot. So it's both a documentary and a narrative film, both Othon and The Making of Othon in the same film. And Rashomon Piece was a Digger piece in another way-the film's soundtrack is its private property, and now the sound accompaniment was completely given over to the public to occupy and farm, as it were.

Listening back to this recording is unlike, of course, any other film soundtrack-hearing the audience make the soundtrack themselves. In a way listening to it is like watching Andy Warhol's films Empire or Henry Geldzhaler-waiting for something to happen in what are basically static shots in viewing those films is much like waiting for something to break the silences in listening to Rashomon Piece. Much of the street activity is faintly audible in the background though, making it a real-time document of this particular hour-plus at 145 Ludlow Street on September 16th 2003. Incidentally, this isn't the first time I've recorded inside/outside activity-on the eight-minute 1996 Run On song "Surprise" [from the Start Packing LP] I hung a mic outside a window in the studio for the duration of the take. During the take there was a thunderstorm, and you can hear thunder and some rain sounds at one point in the final mix.

When I saw Taku Sugimoto & Radu Malfatti perform as a duo in Geneva in March 2004, I was immediately reminded of this Rashomon Piece performance. Over the course of an hour, each played less than 20 pitches total, with 3-5 minutes of silence between each sound. The audience immediately became aware of noises on the street outside the venue, and the noises from the audience members themselves-jackets rustling, coughs, etc.-really became part of the performance, although neither Radu nor Taku reacted to them in any perceptible way. So it really felt like a one-to-one relationship between audience and performer-in a way Radu & Taku weren't creating any more sound in the space than we were; it felt like a collaboration. Since this was a completely improvised concert, the lengths of the silences were determined by the players, not the length of time between subtitles as in Rashomon Piece. But I think the awareness of all the sounds at the time and location of the concert, both onstage, in the venue, and outside, was the goal of the performers, and in this sense it was successful-and, I think, comparable to this performance of Rashomon Piece. Which perhaps suggests that the hierarchy between performer and audience may now be in the process of being dismantled as we begin a new century. And if that happens, who knows what other hierarchies will be torn down?

Twilight of the idols by Dominic Rouse

This piece consists of a long fade out, followed by a long fade in. The fourth Led Zeppelin album, which is untitled, is played. Side one begins to fade out almost immediately, and by the end of the side the music is barely audible. Side two starts off at this volume level and then gradually rises in volume back to the thunderous level the album began at. The mix is stereo to recreate the original album mix and also the playback system with which the album is always heard. Hmm. Well, that's swell, but what, you ask, is the point?

Is it an allegory for the changing of seasons, as summer gradually turns to a dark and cold winter and then gradually turns into spring? Or for the light of day fading as night falls, and then returning as the sun rises in the early morning?

Is it a time-stretched, super slow-motion aural recreation of a teenager turning the music down at his parents' request and then turning it back up when they're out of earshot?

Is it a comment on the fading glory of the classic rock era, followed by the reaffirmation of the music's continued vitality? A comment on the former ubiquity of side one's closer, "Stairway to Heaven", which was once easily heard on the radio several times a day and in this piece gets literally harder and harder to hear?

Is the title a reference to Nietzsche's book of the same name, which is itself a takeoff on Wagner's Gotterdämmerung? Or to Ragnarok (Twilight of the Gods) in Scandanavian mythology - the day of doom in which the old world and all its inhabitants are annihilated, and a new world of peace is born? Does it have something to do with grunge replacing the hair metal of the 70s and 80s in the early 90s? Or is the piece a transcription of the end of the current Piscean Age and a premonition of the Aquarian Age?

Licht is also renown in the indie rock scene as a bandleader (Run On, Love Child) and supporting player to cult legends like Tom Verlaine, Arthur Lee, Arto Lindsay, and Jandek. He has released five albums of compositions for tape and solo guitar, and his sound and video installations have been exhibited in the U.S. and Europe.

With Sonic Youth's Lee Ranaldo, he founded Text of Light, an ongoing ensemble which performs freely improvised concerts alongside screenings of classic avant garde cinema. Licht was curator at the famed New York experimental music venue Tonic from 2000 until its closing in 2007, and has written extensively about the arts for the WIRE, Modern Painters, Art Review, Film Coment, Sight & Sound, Premiere, Purple, Village Voice, New York Sun, Time Out New York, and other publications. His first book, An Emotional Memoir of Martha Quinn, was published by Drag City Press in 2003; a new book, Sound Art: Beyond Music, Between Media, the first extensive survey of the genre in English, was published by Rizzoli in fall 2007.