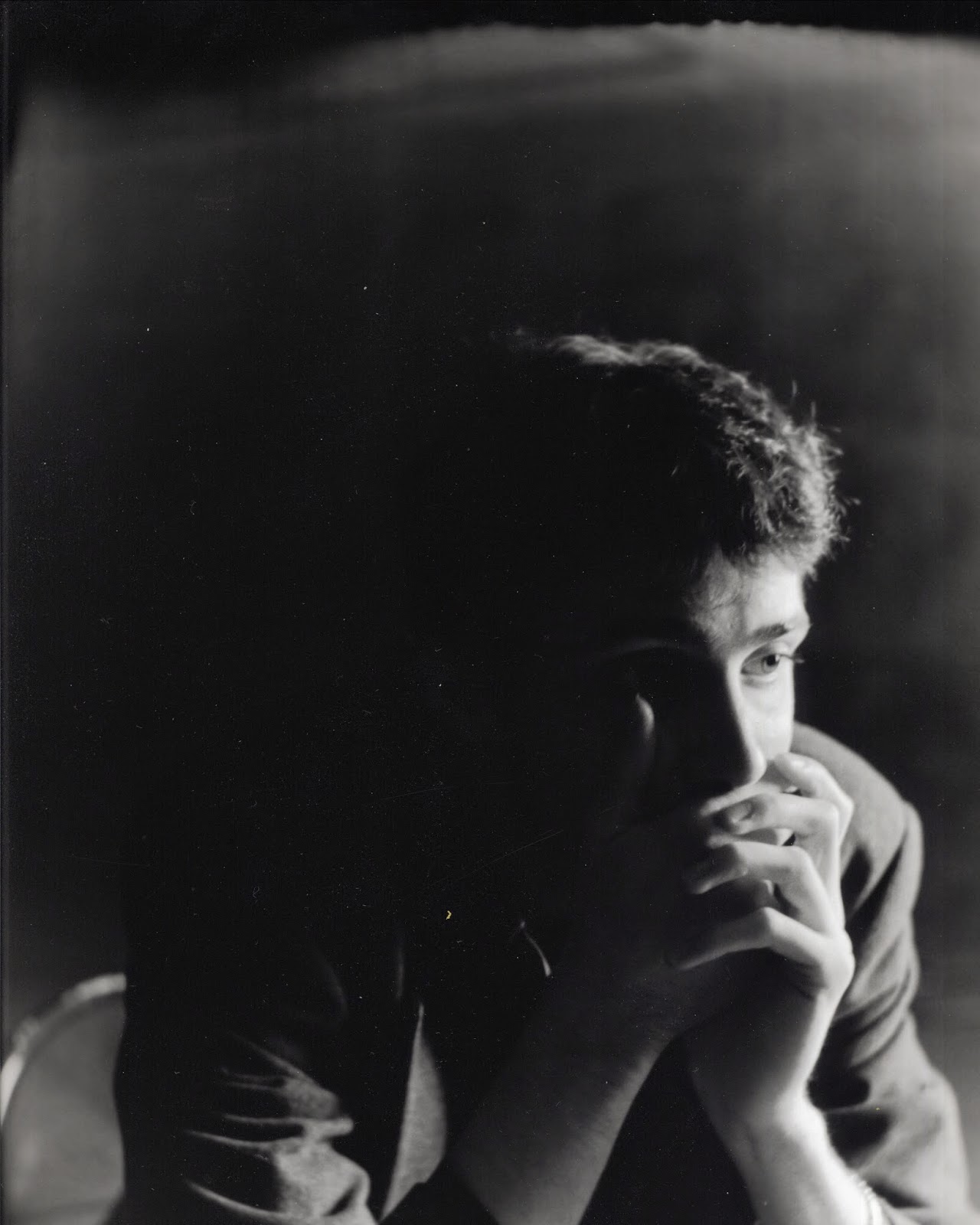 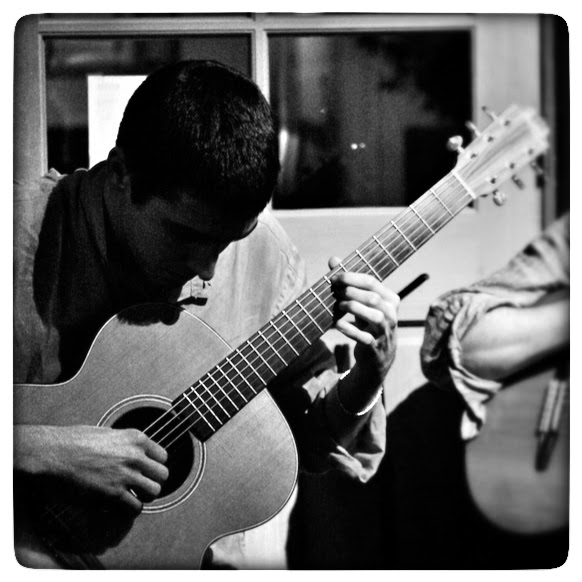 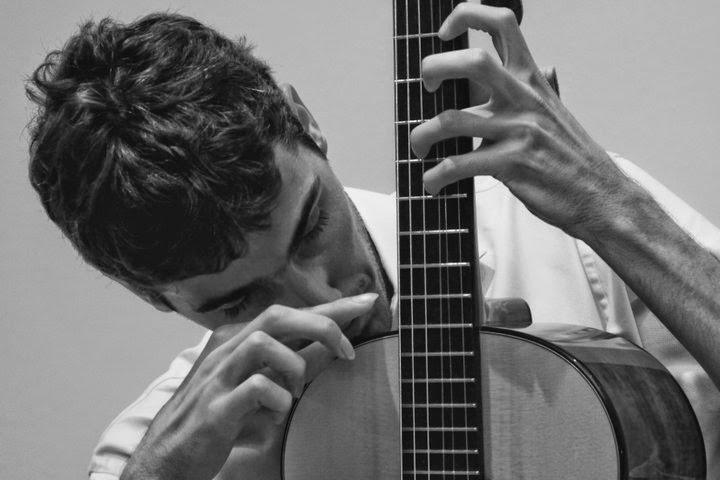 A promising young scholar, Giacomo is a Ph.D. graduate of the UC Santa Cruz, where he completed a dissertation on the just intonation guitar works of Lou Harrison, James Tenney, and Larry Polansky. He has presented at international and regional conferences (SAM, MinSoc, AMS-NorCal), and published articles in Tempo, JSAM, and classicalguitar.org. Currently he lectures on a range of historical and practical subjects at the SF Conservatory, UC Santa Cruz, the University of San Francisco, and CSU Monterey Bay.

I was always fascinated with sound; as a kid I remember giving myself headaches trying to learn how to whistle in different ways, or swirling water in a pan while doing the dishes to listen to the changing resonances. I like to think I have kept some of that "playful" element in how I approach my music-making today.

the first several years were spent strumming along to classic rock songs, stuff like the Beatles, Bob Dylan, Pink Floyd, the Eagles...it wasn't until I was a teenager that I started learning solo fingerstyle guitar with Armando Corsi. Eventually I decided to pursue music full time, and moved to the United States to go to college with a music major; that's when I learned how to read music and began "morphing" into a classically-trained musician.

It wasn't really a deliberate decision. I think I wanted to learn how to play the piano, but we couldn't fit one in our house so my parents got me a guitar. I guess it all worked out in the end.

I never thought I could do things like Larry Polansky's live-tuning pieces (freeHorn, ii-v-i...). I've always struggled with ear training but for some reason the just intonation stuff really makes sense to my ears.

On one hand I am thoroughly Mediterranean from a cultural standpoint; I grew up near the water and the Ligurian coastline with its sights, its scents, the sound of the sea will forever be an integral part of my identity. But I've also been fascinated with the North—in particular the British Isles—and the West. I love English-language literature and poetry, in particular Pound, T.S. Eliot, Seamus Heaney, H.P. Lovecraft, and Tolkien. There is a greatly underestimated musicality to English, in my opinion.

The suggestion of a different reality—or of a different perspective into our reality. For music, I really appreciate works that try to explore the different dimensions of sound (in some way that's really what music is all about)...those works that bring the underlying structures of tuning, acoustics, and perception to the forefront are often the ones I find most transformative.

If you could, what would you say to yourself 15 years ago, about your musical career?

Don't be afraid of putting yourself in musical situation that make you uncomfortable: you'll learn something from them.

In performance and in practice, the feeling of passing time is constantly changing. I've experienced a definite "stretching" of time when playing fast, intricate passagework. On the opposite end, in some of the slower, drone-based pieces time seems to stand perfectly still and yet somehow fly by; I have performed some long pieces (30 minutes and up) that felt just a few minutes long (don't know how long they felt for the audience, though...). Sometimes I try to "anchor" the music to some physiological element—long breaths, heart rates, different speeds of walking paces; you can create some really surprising psychoacoustic effects by establishing these kinds of relationships and then subtly change them over time...

Bill Frisell, though I can't imagine that being a collaboration—I'd just try to learn as much as I could from his playing! Also, as a performer of their music I would have loved a chance to play for Lou Harrison, Jim Tenney, Toru Takemitsu, Maurice Ohana, and Benjamin Britten. Maybe in another life.

Something along the lines that it's better to deal with the consequences of failure than having to wonder what would have happened if you had tried. 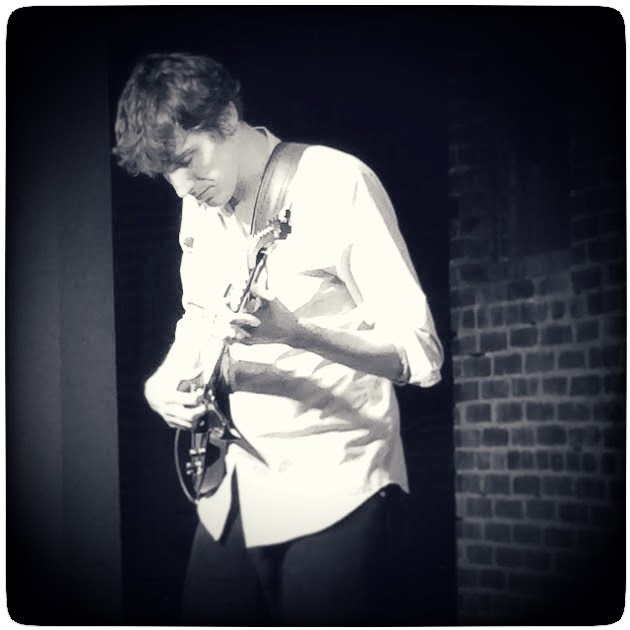 I'm a bit of a gear nut so things are constantly changing. My main classical is a 2012 Greg Byers; I also have a resophonic guitar refretted in Just Intonation after a tuning devised by American composer Lou Harrison. My only electric at the moment is a Parker Fly with a rewired switching system which gives me a fully passive magnetic output with series/parallel/split options for both pickup. I use Paul Trombetta and ARC fuzzes with Strymon and Eventide digital effects; I've also used and loved effects by Fairfield Circuitry, Neunaber Technologies, and Dr.Scientist. My amp is my pride and joy—a 1964 Fender Princeton "Transitional" 6G2, which sounds terrific while being small and light. I kind of want to get another one and run them in stereo. 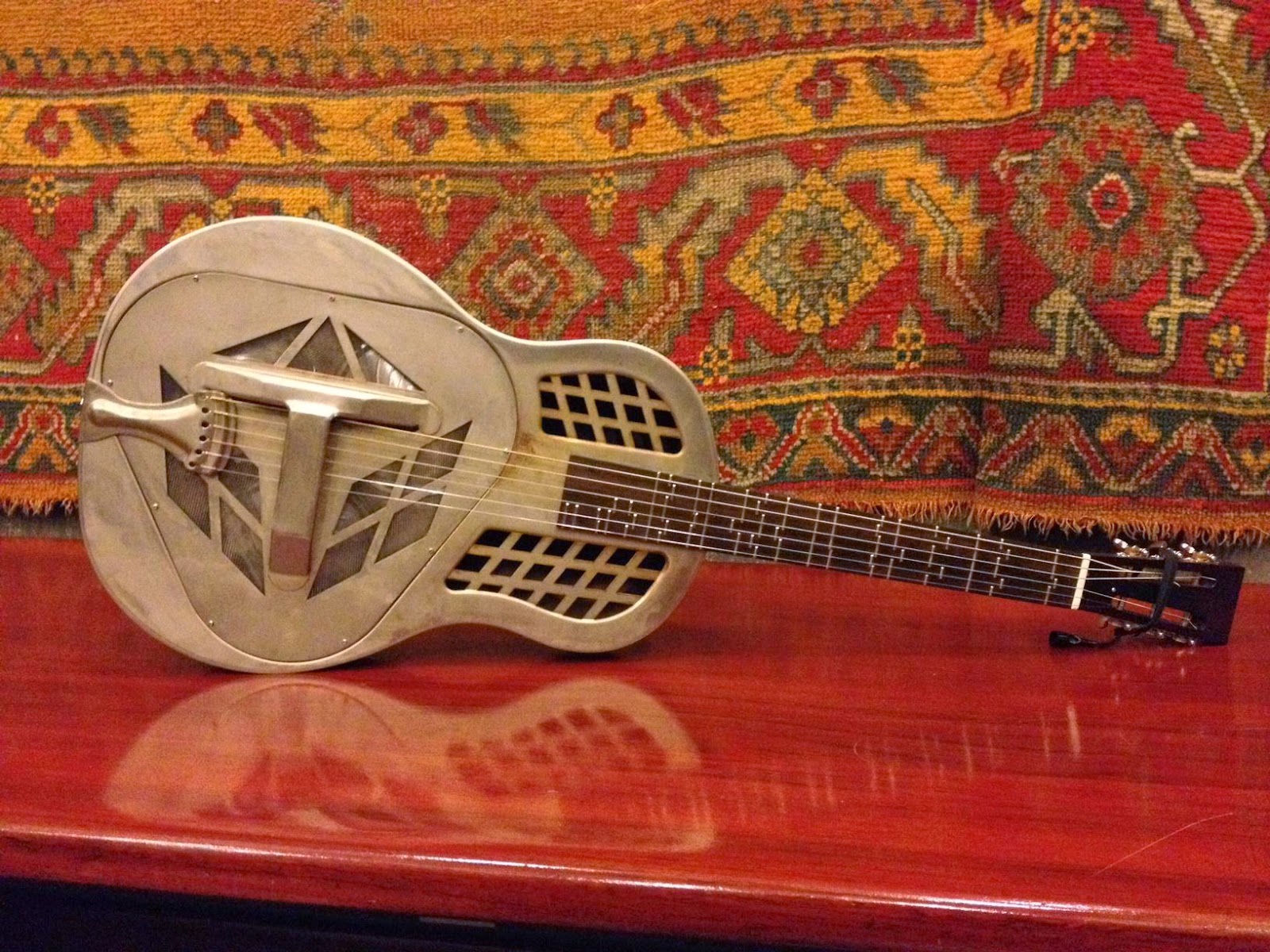 Full of opportunities, almost completely saturated, and with tons of stuff that really does not interest me. But there's also an incredible amount of innovative, creative, and simply wonderful works by all kinds of musicians—you just have to find it amidst all the rubble.

I just finished my fourth solo album, "iv: american electric guitars" which includes works by Eve Beglarian, Larry Polansky, Anthony Porter, and Christian Wolff. It's a independently-produced effort that was supported with a grant from New Music USA, for which I am very grateful and still sort of incredulous. Aside from that I am always working on new repertoire, including a new piece for solo classical guitar I commissioned from Japanese composer Kenji Oh. I was born in Genova, Italy, one sunny September morning in 1983.
I first picked up the guitar when I was 8; actually, I really wanted to play the piano, but there was no way one would fit in our old home, so… I learned the basics from a family friend, then continued strumming happily on my own. When I went for my first lesson with Armando Corsi, one of Genova’s (and Italy’s) most talented acoustic guitarists, I was sure I knew all there was to know. I was wrong.
Luckily enough, Armando proved to be a very patient teacher, and I let him steer me on the right track. He introduced me to the nuanced world of unaccompanied guitar playing, exposing me to a variety of fiery folk and world styles in our weekly lessons. His encouragement and tutoring also impacted my first attempts at writing for the guitar. 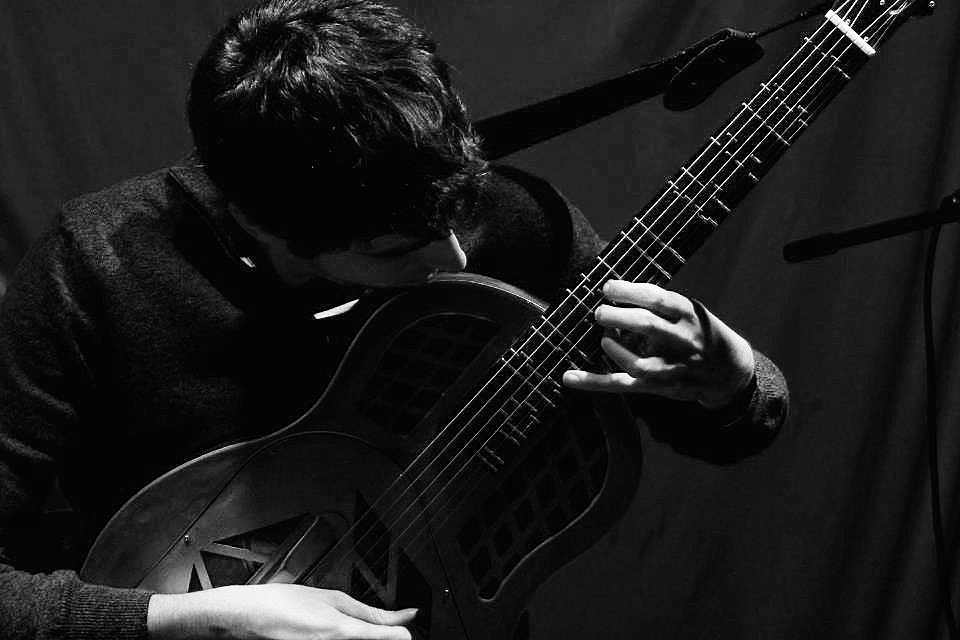 Music was then my secondary focus, but some time during my first year as a pre-med college student I realized that I owed it to myself to do what I loved full time. The previous summer, I had met Muriel Anderson at a guitar workshop in Portland, Oregon. She suggested I pursue a music major at an American school, and her tip led me to Belmont University in Nashville, Tennessee. After the initial culture shock (biscuits and gravy, anyone?) I quickly found my sea legs and began making the most of the plethora of opportunities that the college and city offered me; this period also saw the gradual shift of my interests from the folk and fingerstyle genres, to the world of classical guitar. 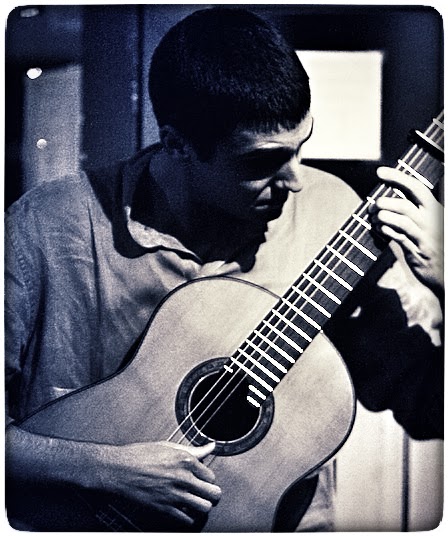 JI guitar pickingAfter graduating from Belmont in December of 2006, I was fortunate enough to be able to continue my studies at the San Francisco Conservatory of Music, under the brilliant and stimulating tutelage of David Tanenbaum. The two years at 50 Oak St. went by in a blur, as my horizons were stretched and my musicianship sharpened well beyond what I thought were my limits. During my second year I served as the Guitar Department Assistant, and I decided to focus more and more on music by composers from the postwar period; the program of my graduation recital in May 2009 featured music written since 1967 exclusively.

The next step of my musical journey began in the fall of 2009, when I chose to continue my graduate studies at the University of California, Santa Cruz. I was extremely fortunate to find advisors such as Amy Beal, Leta Miller, and Larry Polansky, who encouraged me to keep close to my instrument and continue my development as a scholar-performer. In June 2013 I completed my Ph.D., focusing mainly development of just intonation guitars in 20th-century American music, with particular emphasis on the works of Lou Harrison, James Tenney, and Larry Polansky. 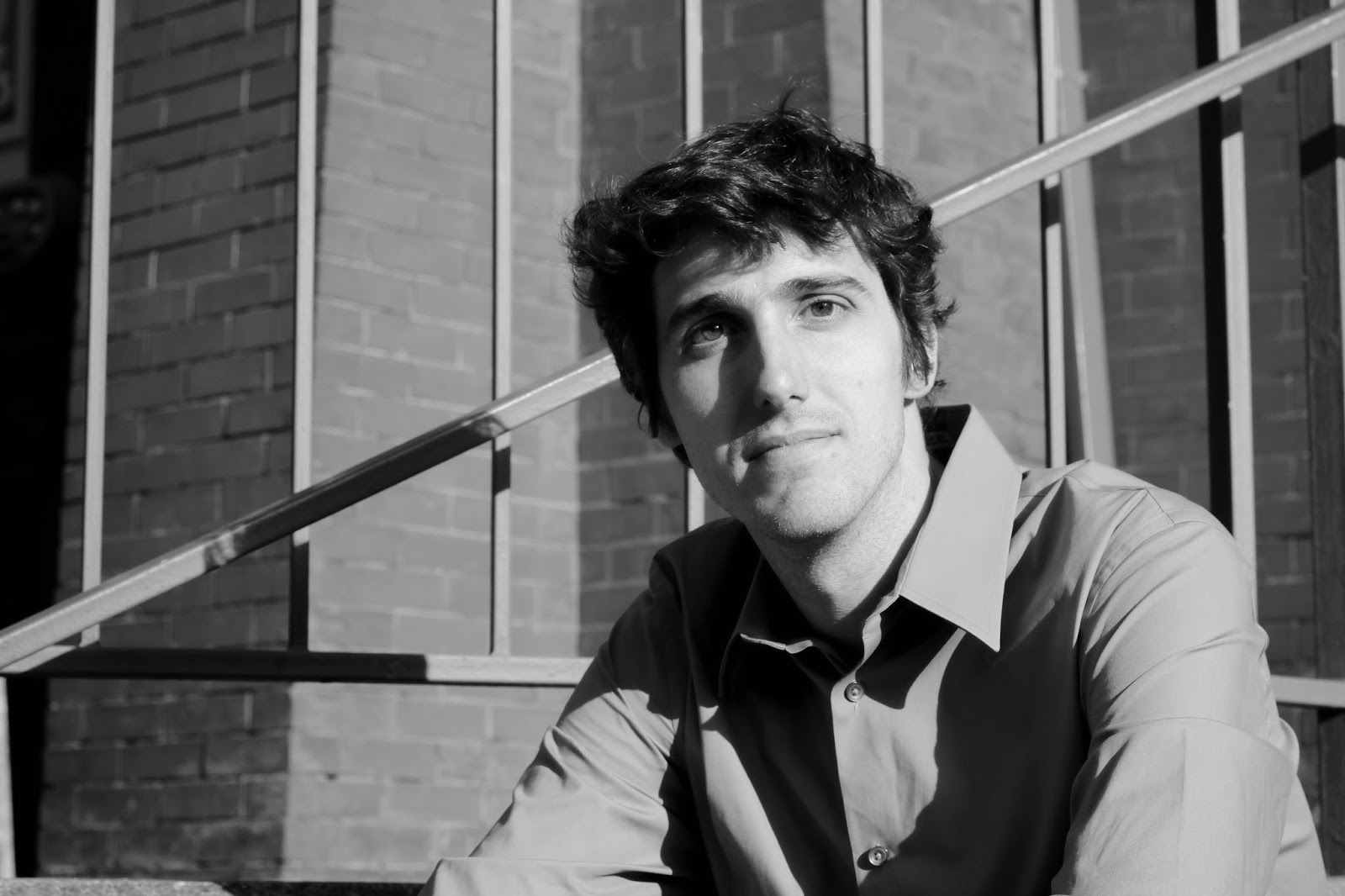 For the 2013–2014 academic year I will be teaching a diverse trio of courses (on 20th/21st Century Classical Music, Improvisation, and the Music of the Beatles) at the San Francisco Conservatory, UCSC, and Cal State Monterey Bay. I especially enjoy teaching in a classroom setting, and I look forward to this new stage of my career. Obviously I plan to also keep up my activities as a performer and a researcher—looks like I will be busy! 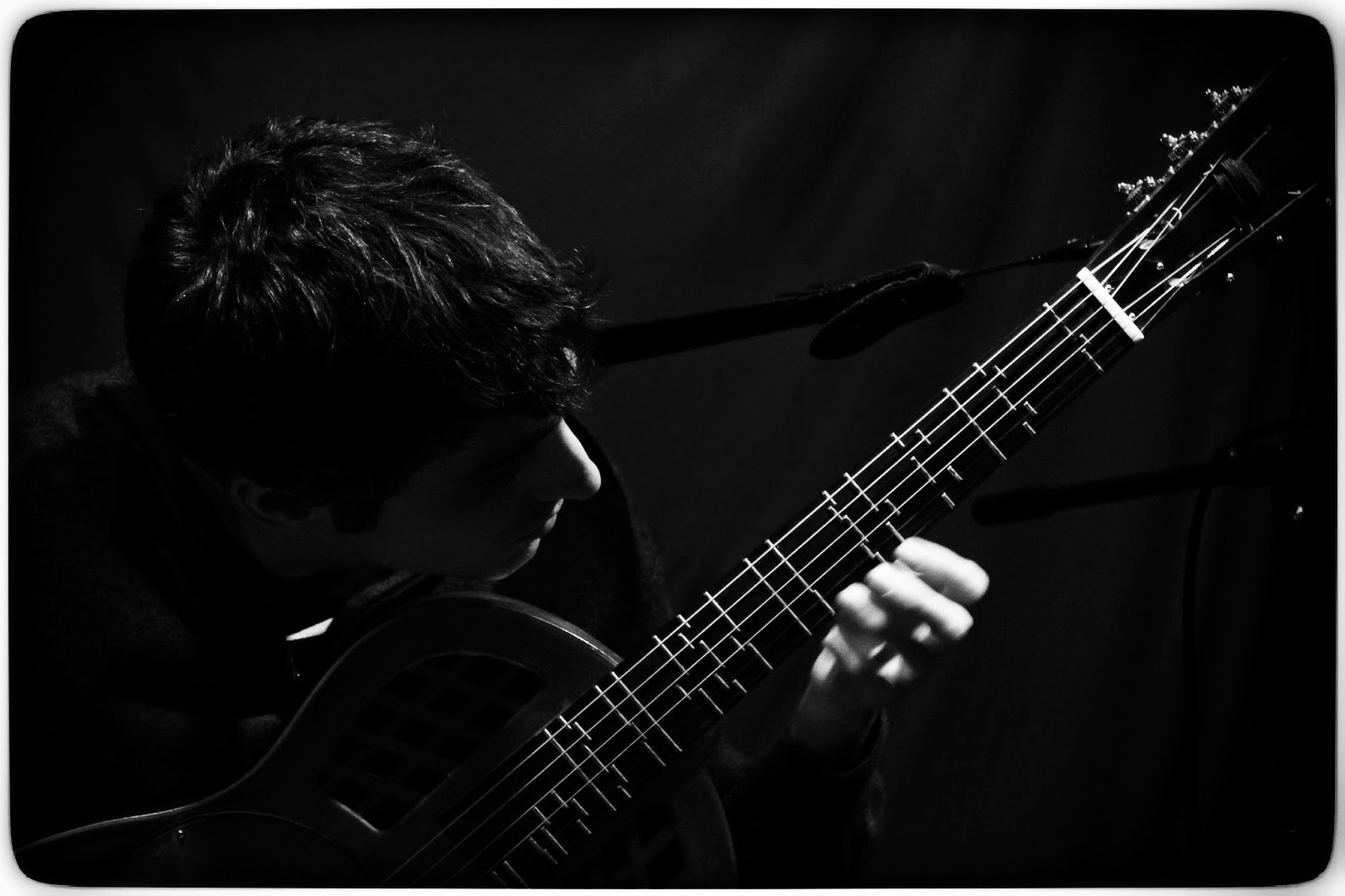 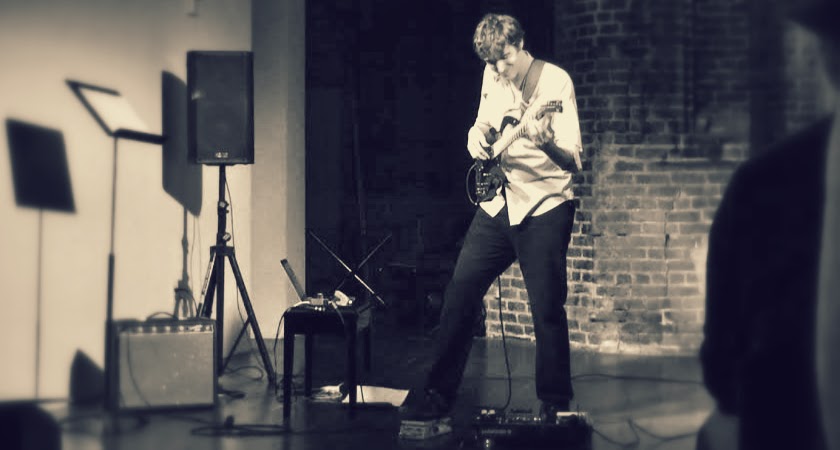