Darren Chesworth, “The Outsider: the Story of Harry Partch” (2002)

His obsession with the subjective human voice and the musicality of speech; his partly relativistic deconstruction of the twelve-note scale as an arbitrary straitjacket; his ethnographic sensibility towards different modes of conceiving language, tuning and existence; his need to create channels suited for his new microtonal chromatic universe; his expansion into convergent fields of expression such as film, theatre and dance; and his desire to capture the vernacular as a locus for the textures of being - all these probably make Partch's the most encompassing of modern creative utopias. Such an overarching project of existence and creation, obviously, could hardly be comprised in an one-hour documentary, and it would take a considerable amount of creativity and an unflinching focus to cast a shadow of justice over Partch's vision in such a short time.


One aspect that could have been jettisoned is, as usual, the biographic mode, the linear movement from A to Z that suggests apparently logic explanations and connections for processes and objects that are far from logical and linear, supported by an invisible voice-over narration that simulates contextualization and sequence. Narrative becomes a form of containment and disambiguation: Partch's struggle with devitalized modes of composition and the 12-tone octave is all of a sudden brought into light by the reading of one single book,


On the Sensation of Tone by H. Helmholtz, and his "discovery" of the arbitrary nature of the Western scale smoothly harmonised with his several inner and outer "deviances", sexuality included; inversely, Partch's long-celebrated and romanticised decision to follow a hobo trail for almost a decade is simply glossed as a reaction to the Great Depression and left strangely disconnected from the surrounding acts. There are the usual statements by friends, patrons and composers, such as Lou Harrison, Gavin Bryars, John Schneider, Phillip Blackburn, and Phillip Glass, adding very little to our understanding of Partch's universe, and it is from biographers and archivists that the most illuminating comments stem from.

While the focus on the apparent eccentricity of the man seems to be a fruitless compromise with the conventions of current personality cults - including a minor polemic with Cage to boot -, it is not surprising that the most rewarding sections focus on the technical aspects of his work, microtonality being efficiently summarised bur perhaps not fully explored in its symbolic reach. The eclipse of "the truth of just intonation" was seen by Partch as a conspiracy in which "pure" musical structures had been corrupted and dilluted by a powerful but stifling hierarchical model, one that curtailed freedom and fostered forms of conformism.

This supposedly pure tuning of ancient Greek tradition, which Partch tried to build into his microtonal edifice, and its promises of a wider access to the the truth that is supposed to inhere in the human voice, holds some of the keys for the composer's universe: a romantic search for a temps perdu, thought to be found both in ancient traditions and non-Western contemporary societies, guided, as ever, by a subversive desire to implode homeland strictures.

Whoever gave the green light to this documentary at BBC 4 should have been gifted with the position of Head of Programming or whatever appropriate position that puts him or her in charge of an unlimited budget to make documentaries as wonderful as this film on US avant-garde composer / musician / instrument maker Harry Partch (1901 – 1974). That Partch should have deemed a worthy subject of an hour-long documentary is a miracle itself, let alone be presented to an audience not used to the kind of music he made and inspired. The film is a mix of interviews with Partch, musicians and composers such as Gavin Bryars and Phillip Glass together with archived films and still photographs.

The film does a good job of delineating Partch’s life from the time of his birth through to his death and of emphasising Partch’s consciousness of how different he was from the rest of society and how he was determined to remain individualist. Various issues and tendencies that thread their ways throughout Partch’s life include his homosexuality, his non-conformism and the problems that this created with the music establishment, the musical instruments he created, his heavy drinking and the effect the Great Depression of the 1930s had on his career.

Partch’s achievement in developing a unique microtonal scale and various instruments such as the keyboard Chromelodeon is covered very well; the instruments (playing on Partch’s 43-tonal scale) provide the music soundtrack of mostly string and percussion music that to Western ears sounds clunky and often out-of-tune by conventional music standards but not necessarily ugly. Indeed, the music heard here varies greatly in sound, ambience and inspiration and usually sounds very robust, life-affirming and jolly. It also often has an Asian sound which isn’t surprising as Partch was keen on traditional Chinese and other Asian styles of music.

The film moves efficiently through the decades and tends to present Partch’s life as though it was more or less on a continuous upward trajectory even though there was a period during the 1930s when Partch gave up music and became a hobo wanderer. Topics such as his determined non-conformism, only to be later embraced by the very critics and upper middle class intellectual types he disliked, and his competitive nature against John Cage and similar experimental music contemporaries arise during the course of the film and are treated in some detail. Sponsors such as Betty Freeman were very important in advancing Partch’s career and Freeman herself is interviewed for the film.

By far the music is the undoubted star of the documentary so it is a little disappointing that not all of it receives a credit during the running of the film (as opposed to popping up in the end credits) – and the instruments on which it’s played aren’t always identified. Some attention given over to significant instruments invented or modified by Partch would have been welcome. Happily the documentary also covers what happened to Partch’s instruments after his death from a heart attack in 1974: the instruments are held at Montclair State University in Montclair, New Jersey, and are still played by two ensembles several times a year. 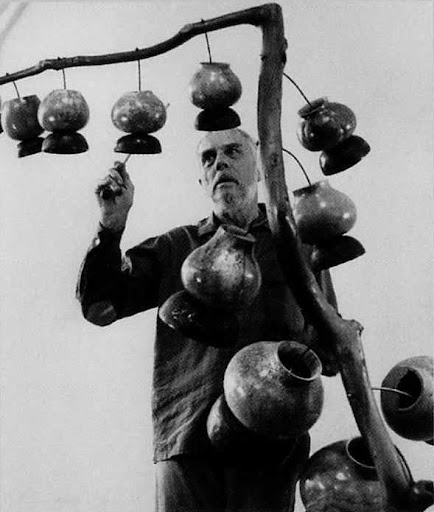 If you know very little about experimental music or music created in unconventional scales such as Partch’s 43-microtonal scale or the just intonation favoured by US musician Pauline Oliveros, this documentary serves as an ideal introduction to the scene.