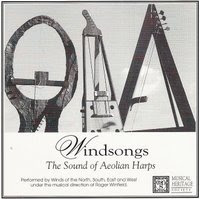 
From the liner notes:


"Windsongs" is a unique album. Using an orchestra of eight Aeolian Harps - instruments played entirely by the wind - Roger Winfield has captured the essence of the Four Winds.


Some years ago Roger became interested in the possibilities offered by the wind in activating musical strings and creating its own 'music of nature.' This was while he was living in a wild spot on the magical Preselli Hills of West Wales. The initial fascination was sparked off by hearing the breezes playing across a guitar that had been accidentally left outside.This led to the creation of several weird and wonderful contraptions that made potentially unique musical sounds yet lacked satisfactory volume. These subtle sounds may have been sufficiently loud for the ears of the ancients, but in our modern noise-laden times this music of the air could be easily drowned out by the intrusive sounds of man. He decided to overcome this problem by experimenting with microphones and pick-ups and eventually settled for the latter. Magnetic pick-ups are used to amplify acoustic guitars and are small electronic gadgets fixed to the body of the guitar close to the strings.


Several years later the idea of an Aeolian Harp orchestra began to develop and with the aid of experienced instrument makers Roger created the sculptural ensemble that are featured on this album.


Made from wood, perspex, fiberglass and metal, the instruments were designed to be aesthetically pleasing as well as technically functional. Each instrument was designed to take a particular gauge of metal string; the largest instruments strung with bass strings, the smallest with thinner strings so creating a soprano effect. These were then fitted with the magnetic pick-ups to make them audible.

A Closet of Curiosities