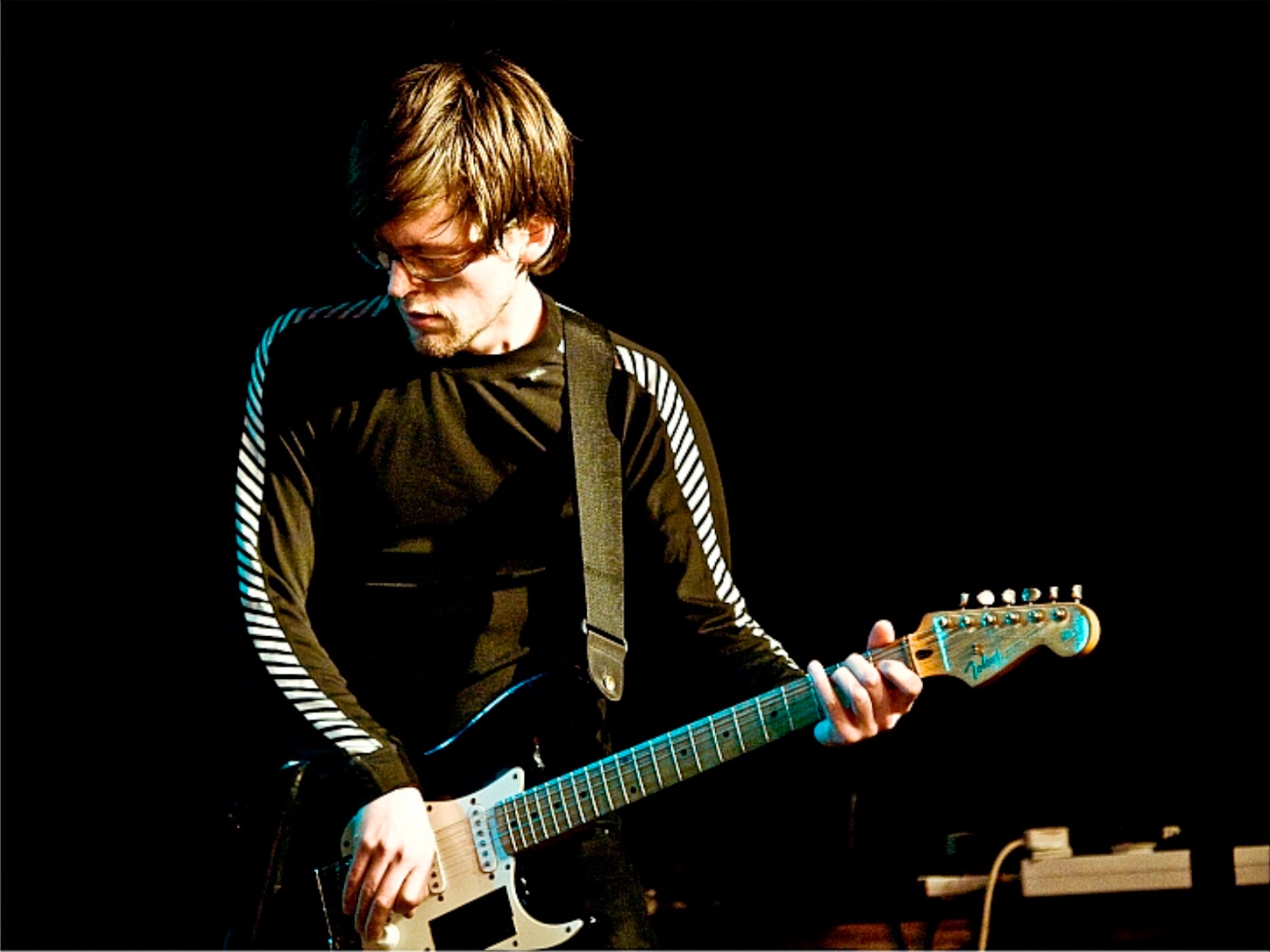 The Norwegian guitarist Håvard Skaset has been transcending musical borders in countless collaborations spanning from noise, sound based improv to noise rock. A dedicated artist from the Norwegian experimental music scene, whose work is a mix between raw primal sounds and the use of instrumental skills rather than effects. 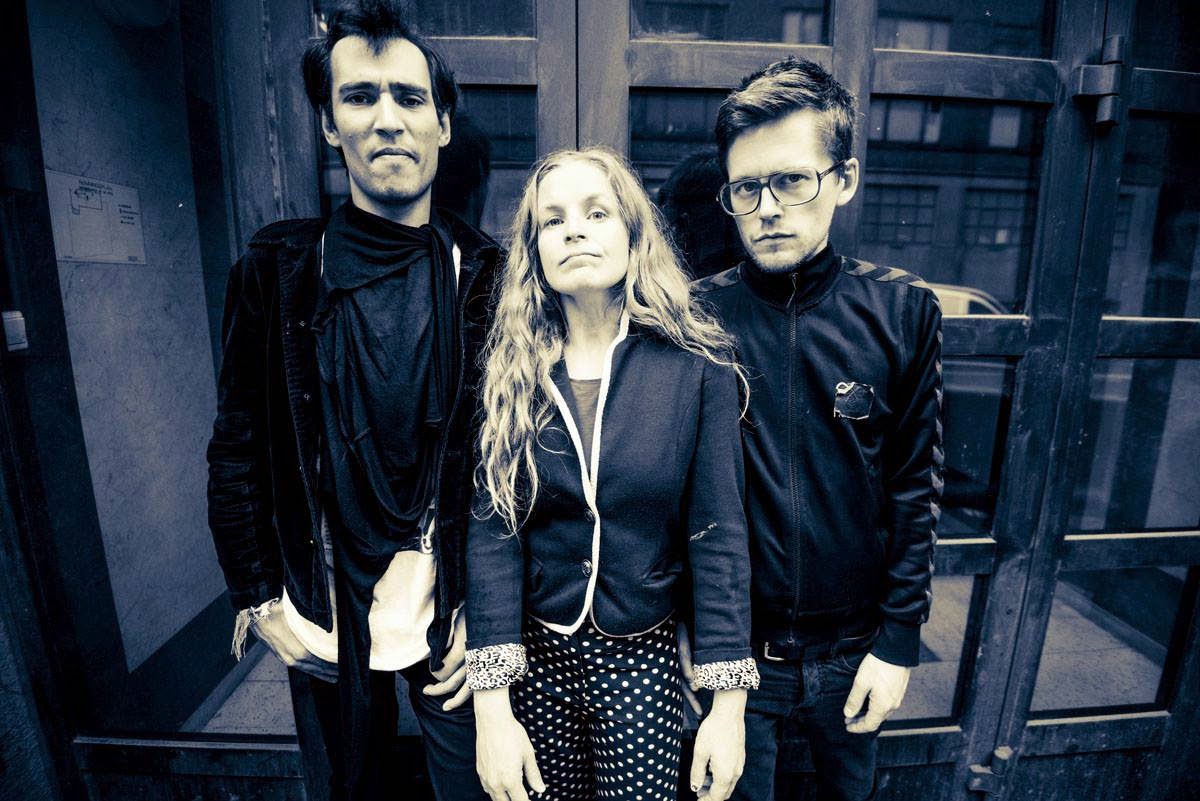 Apart from his solo work, Skaset’s main focus is the acoustic noise group SULT and the noise rock band MoE.The Norwegian trio is known for mixing minimalistic compositions with alternative and experimental approaches that fail to fit in the rock genre. Existing since 2008, MoE has released numerous 7"s and 12"s as well as two albums, before Fysisk Format got the chance to release their third album, "3". "3" was recorded and mixed in two days in Norway's well renown Athletic Sound Studio and features 7 tracks of raw and to-the-point music inspired by the band's far stretching tours through Mexico, Japan, South East Asia, Europe. Over the years MoE have collaborated with musicians and bands such as Okkyung Lee, John Hegre, The Observatory, Arabrot and Lasse Marhaug who, with his many talents, also did the artwork for the album. Loud and violent, they molest their instruments and bring the listener close to a healthy insanity. 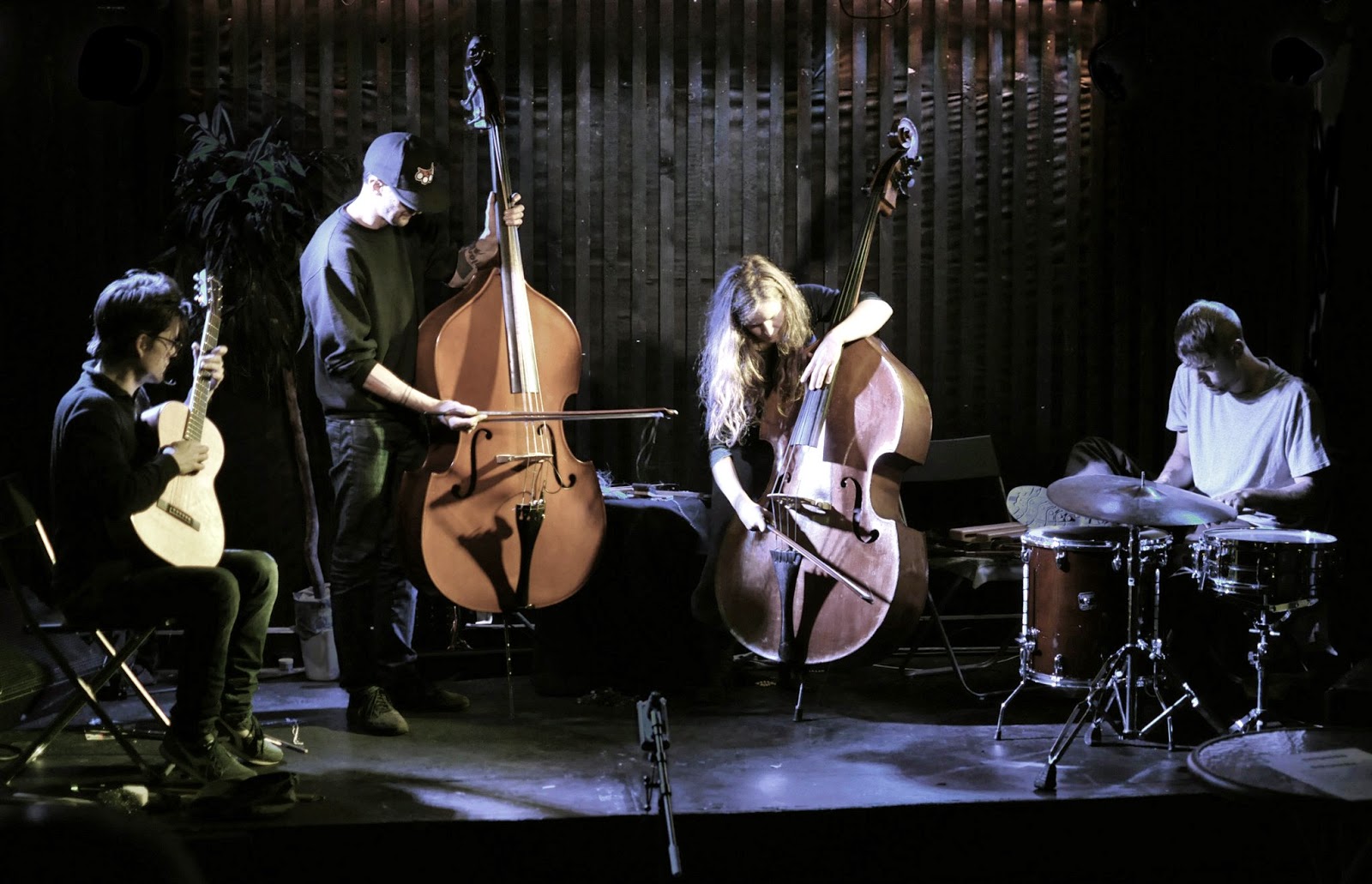 His long-term connection to California has resulted in several releases and US tours with groups like Bay/Oslo Mirror Trio and SULT.  Sult is an acoustic noise ensemble with members from Oslo and the Bay Area. Their music reflects the noise genre's concern with layers of sonic texture, though completely performed on acoustic instruments. Individual sounds run precariously aside one another as independent streams, and alternately blur into a unified mass. Bay / Oslo Mirror Trio was founded in San Francisco in January 2008 and was continued the following autumn with a Norway tour. Since then, Mirror trio has performed whenever the core members schedule have crossed paths.
The crew is as the name implies, a mirror line-of 2x double bass, electric guitar and 2x 2x drums. The project has a floating crew (but fixed instrumentation) as where and when they meet, but a core crew has always been Guro Skumsnes Moe, Jacob Felix Heule, Håvard Skaset and Tony Dryer.

Bluefaced People seeks the imperfect, the broken and barbaric. BFP makes no use of sophisticated machines and flashing lights. Only rotten riffs and broken guitars. The sound is forced out of the instruments like water out of stone. The music arises only when the notions of beauty and harmony are set aside. The music is strongly influenced by the no wave and punk movement and musicians as Arto Lindsay, Glenn Branca, Lydia Lunch. 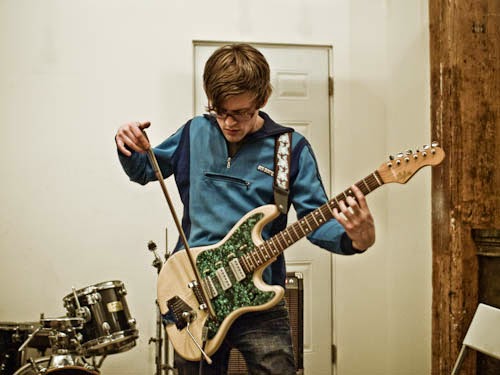 Camille Norment Trio investigates the visceral qualities of resonance, noise, and overtone, creating music that enacts and deconstructs cultural and historical positions relevant to each of the instruments. Their performance is an organic movement between the composed and the improvised, creating a dynamic soundscape that defies a fixed genre reference. Their mysterious sonic environoments hover at the meeting points of folk, rock, classical, experimental music, and more.

The trio’s music levels beauty with noise, and the consonant with the dissonant, as it embraces scratches, squeels, feedback, and taunting microtones as equals to purest of tones. It becomes like a slipstream of warping time and abrasive textures, often forming earworms and wooing songs. Simple melodic phrases reference one another forming of a memory that is at once psychological and somatic. It cycles the listener through lulling and abrasive textures inspired in part by the instruments’ relationships to ideas of magic and the uncanny, hypnosis and trance, and noise as a psychological atmosphere. The soundscape is enveloping, and the visualization is a captivating fulfillment of the hybrid world of art and music.Each of the instruments was simultaneously revered and feared or even outlawed at various points in their histories. The sonic worlds they create resonate through a tantalizing union of the instruments’ voices and their often paradoxical cultural histories. 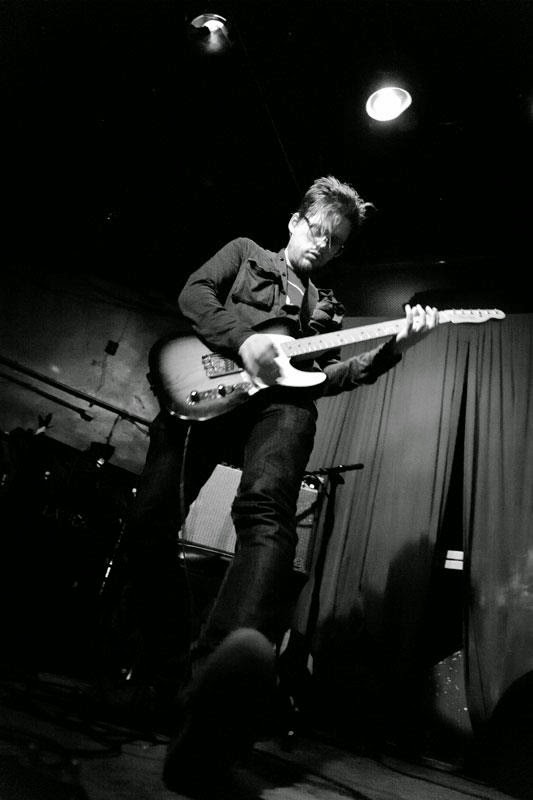 Nothing really, but it sure feels like music expects a lot from me sometimes.

My new solo recording is more different than anything i´ve done before.
To be released early 2015 on conradsound.com.
I even do some synth and various other sound sources as well as playing the guitar.

The boring way to answer this would be to say it has no relevance.
But for most musicians you actually have to acquire some kind of technique to be able to materialize you´re ideas. No matter if it´s just rubbing the strings with a broom.

What quality do you admire most and what do you most empatize with in a musician?

Musicians who manage to communicate their music in an natural and including way.
Endurance and the ability to make things happen. So many just give up and fade away or get´s lost in their own crazy ideas. Being a musician is so much more than performing.

Everything is a lot faster now than before. And it´s easier to keep a band running even if you live in two different parts of the world. One of my most active projects; Sult, an acoustic noise trio consisting of musicians from Oslo and San Francisco, have been working together since 2008, and we´ve manage to make a lot of music. Since we´re able to send mixes back and forth with uploading sound to servers. That´s a benefit that should not be neglected.

One of the challenges would probably be that there is a jungle out there, and if you´re new to this music, you´ll have to listen to a lot of not so good music before you find the good stuff.

Still searching for the core.

I just like to do it. It´s become my way of living.

How would you define noise?

If you mean noise music (not noise as in muzak/background music etc..), to me noise doesn´t need to have beginning or an end, or what people refer to as form.
Noise also is when the listener can decide themselves what frequencies they pay most attention to, because the spectrum is so vast. Noise has become a wide and a hip word to use. Most music that i hear nowdays that claims to be noise, does not make me think of noise.

I usually don´t think about my music as noise. Mostly it´s a mix between different genres. Sult, MoE and my solo stuff has elements of noise, but also lots of other references.

Maybe seeing Milk Cow in Tokyo earlier this year. At least my most crazy experience.
Bill Orcutt doing solo electric in San Francisco a while back was amazing.. There´s many. I´ve seen so many great show over the years.  Both with well known performers and people i´ve only seen once.

Some would say Bluefaced People, Or some would say Sult. I dont´know. Other people must judge. Most people think all my projects are crazy in one way or another anyway. I don´t do anything just to be crazy. I´m an academic. I do it to research certain ideas.

Not really. But meeting hard working people like Fred Frith, Maja S.K. Ratkje, Leslie Low and Dharma Shan and everyone from the Singaporian band The Observatory, Lasse Marhaug, Guro S. Moe, Jacob Felix Heule have made me realize that this was the way to go.

I don´t practice neither of them, but i appreciate modern art of all kinds as both an spectator and a collaborator.
I´ve been working with various kind of artist in various disciplines, and it usually widens my view on performing and composing music. I would especially like to highlight the collaboration with Sult and Greg Pope, and my collaboration with Camille Norment Trio.

I started out with playing in rock and thrash bands when i was a teenager. I gradually got interested in contemporary music, like Stockhausen, Webern, Schönberg and various forms of jazz, basically mainly pitched music. And worked a lot with liberating the tonality. Luckily i discovered Lachenmann, Scelsi, Fred Frith, Keith Rowe, Lasse Marhaug, Pain Jerk, Merzbow, Feldman and a lot of other musicians/composers that turned me into (for me) better ways of thinking about music.

I'm a devoted runner. I wouldn't be able to do this without running every day. Playing an instrument, sitting in the car for hours every day, not getting enough sleep, working on the computer, everything that musicians do is against nature. You´ll get all kinds of trouble if you´re not serious about taking care of yourself. Snow or rain, I don´t care. Put your shoes on and run.

Presence. You usually hear it from the first note if a musician are serious with what he or she´s doing.

I´ve heard too many times that i should get a proper job.  Guess it´s valuable advice. I would definitely earn more money that way.

Never reaching perfection. And always developing the way I listen to music/sound.

This is some of my most active projects:

MoE and Sult are by far the most active bands, and have been touring extensively for years now. And releasing numerous albums. The other projects are stuff i´m doing in between those two bands.

Seems like we will keep up the activity with MoE, and hopefully we´ll be touring Japan, China, Australia, Europe and USA in 2015. Sult will release a new album produced by Lasse Marhaug and probably do some touring. In addition Sult have two ongoing projects with the live cinema artist Greg Pope and the dancer Christine Bonansea Saulut.
Another thing i´m looking forward to, is to perform at La Biennale di Venezia with Camille Norment Trio. On top of this we´re hoping to finish some new releases with MoE.