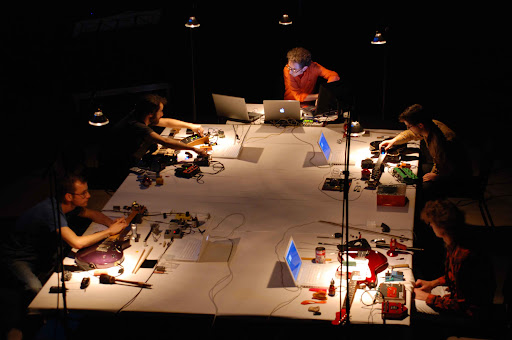 Zwerm is a Belgian-Dutch electric guitar quartet founded in 2007.
Their first cd called The World‘s Longest Melody was mentioned by The Wire Magazine as ‘an obvious contender for album of the year 2010’. They gave concerts in the UK, Europe and the United States. Zwerm is described in the press as:

“An exciting, sometimes alienating and always quirky musical discovery as you rarely get to hear” (Goddeau march 2011).
“A gorgeous feedback texture heavenly braided by the four guitars of Zwerm (...) If Zwerm would be listed in rocktradition, the quartet seems well in place in the vicinity of Sonic Youth and associates” (Kwadratuur dec. 2010).
“Ein imposantes Surround-Hörerlebnis” (Kronenzeitung jan. 2010).

“The boldness and the imagination of the music speaks out of their performances” (De Standaard oct. 2010).

Toon Callier (Belgium, 1983) studied classical guitar and chamber music at the Royal Conservatory of Antwerp. Afterwards he studied a 'master after master' in contemporary music at the conservatory of Ghent. His teacher was Tom Pauwels who is guitarist and artistic advisor of the Brussels based ensemble Ictus. Toon plays both classical and electric guitar. On his repertoire you find music of Hans Werner Henze, Fausto Romitelli, Steve Reich, Lois V.Vierk, George Crumb, Larry Polansky… Toon is a founding member of the electric guitarquartet ZWERM (www.zwerm.be), he is also artistic assisitent of the Belgian ensemble of contemporary music Champ d'Action (www.champdation.be) and works as freelance musician with ensembles as Nadar, Besides and Brussels Philharmonic.

Matthias Francisco Koole (Belgium, 1982) is active as a guitarist in written and improvised contemporary music. He studies with Tom Pauwels, is a founding member of the quartet ZWERM and plays regurarly with ensembles such as Champ d’Action and Collectief Reflexible. As a free-lance guitarist he has also played with Ensemble Cairn of Paris and the Brussels Philharmonic. In duo with Kobe Van Cauwenberghe he plays pieces by Lachenmann, Ferneyhough, Globokar etc. As a soloist he is currently working on a program with pieces that find themselves on the edge between music and performance (David Helbich, Simon Steen-Andersen, Mario Del Nunzio, Stefan Prins...) He has premiered pieces by Richard Barrett, Stefan Prins, Karlheinz Essl, Larry Polansky, Cristian Morales-Ossio, Nico Sall, Sérgio Ribeiro Lacerda among others...

Bruno Nelissen (The Netherlands, 1979) studied classical guitar until 2002 with Hein Sanderink, and composition with Alexandre Hrisanide, at the Fontys conservatory in Tilburg, Netherlands. Before, during and after he played electric guitar in bands and contemporary music ensembles; he sang in choirs and French chanson groups; he wrote operas, music theatre works and lots of chamber music for lots of different musicians and ensembles; he took lessons and masterclasses with guitarists and composers; he played classical guitar in various ensembles with various musical backgrounds, contemporary music, tango, classical music, world music; he was programmer at the contemporary music venue DE LINK; he tought guitar and composition at music schools: In short, he was and is a musician.

Johannes Westendorp (Germany, 1979) studied classical guitar with Hein Sanderink at the Fontys Conservatory of Tilburg (Netherlands). He continued his studies for two years at the Conservatory of Gent (Belgium) with Tom Pauwels for contemporary guitar music and courses composition and free improvisation with Dr. Godfried-Willem Raes, and graduated cum laude in 2005. In the same year he founded Cluster Klankcollectief with Merijn Bisschops; a pool of young Dutch composers and performers of new music. In 2005 Cluster cooperated with Muzieklab Brabant in the Volume 1 project investigating the relation between sound and space. He made Tijdwerk (2006) a performance for temporary and self destructing instruments. And .../Obstructie (2008), a sound installation in which the musical instruments are connected to the three players in a way that they obstruct each other and eventually inevitable result in silence. As a writer he is currently involved in the opera Halfgeleiders produced by Productiehuis Brabant and November Music. Johannes is participating in the organisation of DE LINK concertserie in Tilburg. As a guitarist he performs regular with the electric guitar quartet Zwerm. In his solo guitar program for both electric and acoustic guitars he is focusing on American minimalism vs (European) new complexity. Since 2008 he doing a master study artistic research at the University of Amsterdam on a project called Displacement and three movements towards artistic production.