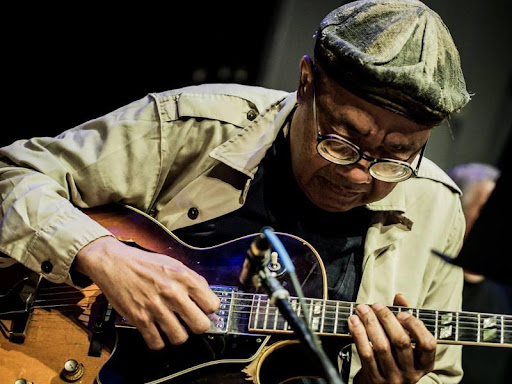 Bern Nix
Bern Nix is an American jazz guitarist. He has recorded and performed with Ornette Coleman from 1975 to 1987, notably playing alongside fellow guitarist Charlie Ellerbee in Coleman's Prime Time group on their key recordings includingDancing in Your Head and In All Languages in 1987.
Hailed as one of the greatest jazz guitarists of our time, Bern was voted among the top ten jazz guitarists poll by Down Beat magazine.
Nix has led the Bern Nix trio since 1985. In 1993, the band released the album "Alarms And Excursions." The album made many critics' top ten lists.
A native of Toledo, Ohio, Nix taught guitar upon his arrival to New York City. He is a graduate of the Berklee College of Music and currently resides in New York, New York.
Nix also performed with James Chance and the Contortions and appears on their 1981 Live in New York recording. He has also appeared with the following: Jayne Cortez, John Zorn, Marc Ribot, Elliott Sharp, Jemeel Moondoc, Ronald Shannon Jackson, James Chance, and Kip Hanrahan.
Nix released a solo recording entitled Low Barometer (Tompkins Square Records) which became available online in September 2006.
Another recent Nix composition, "Les is More", appears on "Art and Money", an album released by 1687, Inc. in 2006.
In 2013, the Bern Nix Quartet released an album entitled "Negative Capability."
Publicado por Miguel Copon en 10:12 AM