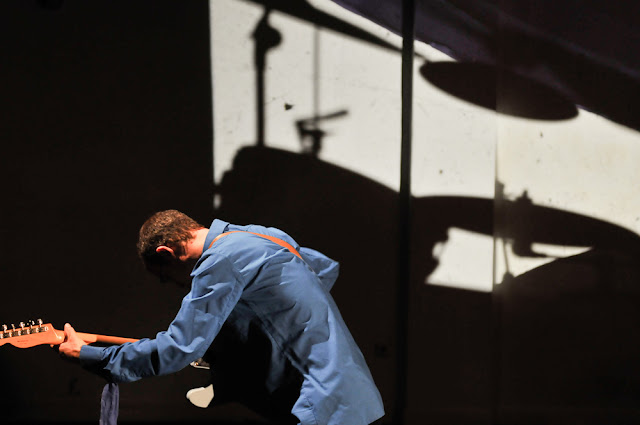 As a teenager Christoph Funabashi (*1974) got enthusiastic about rock guitar and the world of contemporary music. In the nineties he played with the indie rock bands Scare Your Girl, Ölkrise ’73 and Nelson and studied classical guitar, popular music and composition at the Arnhem Institute for the Arts and the Dutch Messiaen Academy. After moving to Berlin in 2004 he mainly played and wrote chamber music – often in connection with theatrical elements. 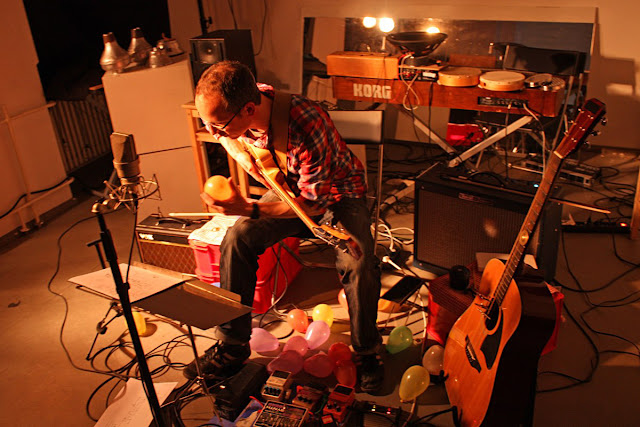 He worked for the Zeitgenössische Oper Berlin, the concert series Unerhörte Musik and Saitenblicke, the International Youth Opera Festival Utrecht, the Intersonanzen Festival Potsdam, the Johannes Gutenberg-University Mainz and the Theater Görlitz and premiered works by Martin Daske, Markus Wettstein, Ferdinand Försch, Torsten Papenheim and other contemporary composers. With the Garagenoper Kollektiv he developed interdisciplinarily works between contemporary jazz, indie rock and dance theatre and worked together with the Ensemble Xenon and the electric guitar quartet E-Werk. 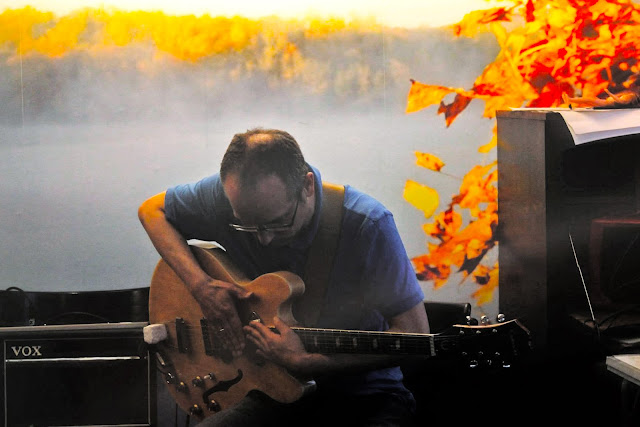 In 2012 his recording of John Zorn’s The Book of Heads was released on the Berlin-based label schraum. As an improviser he played in ad-hoc ensembles including Korhan Erel, Gunnar Lettow, Thomas Gerwin, Axel Haller, Audrey Chen, If Bwana, Phil Durrant, Andrea Neumann, Robert Klammer, Peter Kastner, Nicolas Wiese, John Hughes, Rolf Pifnitzka and others. Currently he lives in Hamburg where he continues his work as guitarist/composer as well as guitar teacher. 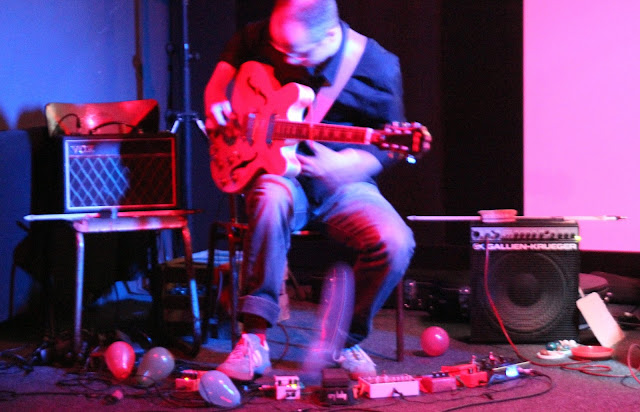 A good friend from school played drums and when I heard it the first time I immediately also wanted to learn it. But then we planned to form a band together and so I had to take the guitar – I am still pretty happy with that choice.

When I started playing I was totally into heavy metal. So developing a good technique to be able to play fast was a main goal. I remember a certain exercise solo  – “To The Stage” by Troy Stetina – which I thought I would never be able to do. After some weeks of practice I could actually play it and that really gave me a kick!

In general it often amazes me how development comes in phases. When practicing, it often may seem that you’re stuck and don’t move ahead at all, but then suddenly you make a giant step. Something has been growing under the surface all the time and then it pops up.

A large part of music making is craftsmanship but I think really good music lies beyond that. When you listen to such a great musician like Glenn Gould for example, it’s obvious that his superb technique is the basis that enables him to express the most complex music in such a clear and beautiful way. But on the other hand I also enjoy bands like The Moldy Peaches who sound as if they picked up the guitar just yesterday. About the electric guitar it is often said that there has to be “dirt” in your playing. So we refine our technique to produce the dirt we want. A very funny example is a piece from “The Book of Heads” in which you are supposed to let the e-string ring “as if by accident”. While we are normally trying to control everything with our technique, giving up control may sometimes be just the right thing to come to something new. But yet again this is a kind of technique called indeterminacy.

Of course there are countless works that influenced my music. For me as a performer Martin Daske’s “foliant 28” was a very important piece to play. The “foliants” are a form of a movable, three-dimensional graphic notation. They have a strong sculptural character and are always connected to a specific instrument – no. 28 is for punkrock guitar and I had the pleasure to première it in 2010. Finding ways to translate it into sound was a very inspiring process and it’s just fun to play it! It helped me a lot to trust in my intuition.

Music surely plays an important role in so many people’s lives and I could hardly tell a person that doesn’t listen to music at all. But I also think that we as musicians tend to overestimate its importance. What I can say is that over the years I more and more appreciated the social aspect of playing music together rather than (just) consuming it – be it playing with other professionals or with my students. 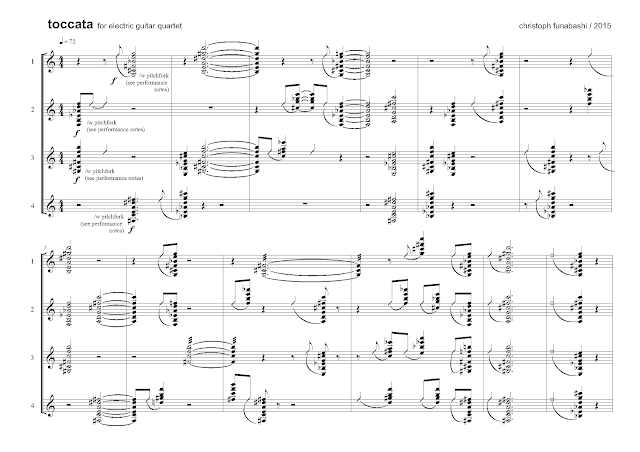 I remember the surprise in the creative process especially when writing for bands in my 20s when a complete song somehow popped up in my mind and I had no idea where it came from. There are two very different compositions that I both wrote very quickly and that are somehow special to me: first my “Pages” from 2003 – a series of very short pieces for flute and guitar – and second “Priele” from 2012 – a large spatial composition that is played entirely on pieces of styrofoam spread on the whole stage and around the audience.

What is your relationship with other art disciplines...?

Since my wife used to work as a contemporary dancer I have a strong connection to dance. What I especially like about a lot of contemporary pieces is that they can easily include all sorts of performative arts. But just as music, dance can sometimes be a very abstract thing which I also like. I was involved in several dance and music theatre projects – namely the Garagenoper Kollektiv – and a lot of my compositions include theatrical elements. I also always loved painting. After discovering John Cage’s music and writings I read a lot about the artistic avant-garde of the 20th century and I’m always interested to see new exhibitions. 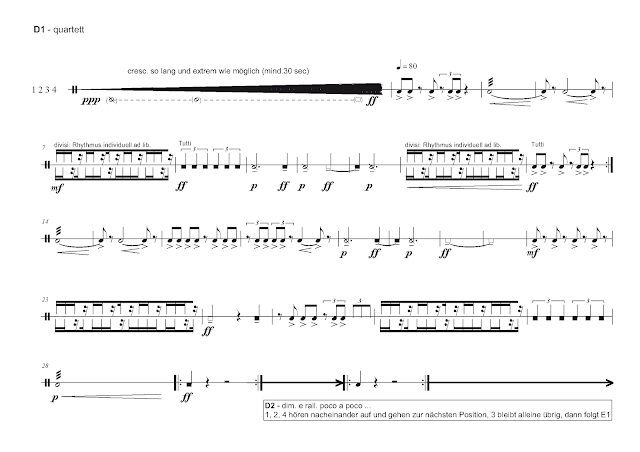 That it grabs me.

The ability to clearly express a musical idea – be it one’s own or that of a composer. 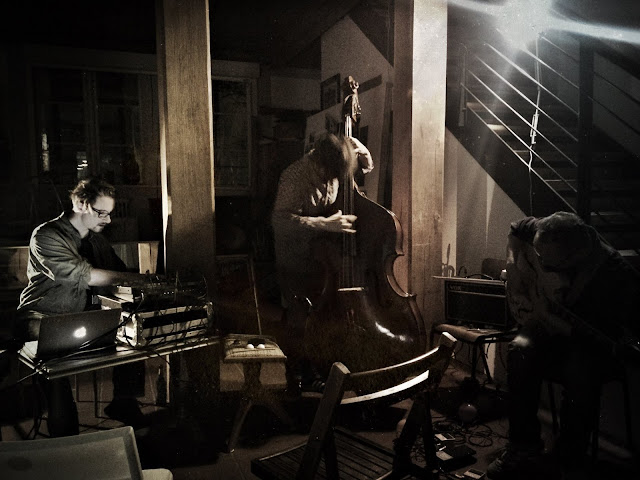 With Nicolas Wiese and John Hughes

I mainly play a Fender Telecaster and an Epiphone Casino together with a Fender or a Vox amp. Also a no-name steel-string acoustic guitar that I got as a kid and that I still like a lot. As pedals I use a Cry Baby Wha Wha, an EHX MicroSynth, a Boss DD-7 delay and a bunch of distortion/overdrive-pedals which I like to experiment with in different combinations. The preparations and objects that I use include a lot of things from “The Book of Heads” – like pencils, alligator clips, finger cymbals, styrofoam and the obligatory balloons – and whatever else I find interesting.  A very simple thing I like to do is playing with a pitchfork on the strings. You can hit the strings with hit, press it onto them and pull it off, let it bounce, scrape with it, place it in between the strings or use it as a slide – a very versatile and effective tool.

Not so long ago I heard a fantastic solo concert of the double bass player John Eckhardt presenting his project “forests” which really impressed me. I also saw a great performance by John Edwards and recently had the pleasure to play with the wonderful bass players Matthias Bauer, John Hughes and Adam Pultz Melbye. So I’ve become a little bit of a double bass fan. 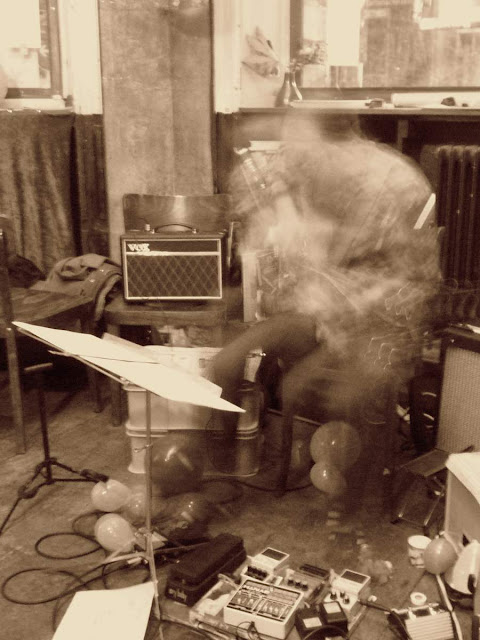 Besides playing improvised music in various ad-hoc settings and my regular teaching jobs I just finished a composition for electric guitar quartet which I’m rehearsing with a new quartet here in Hamburg. I’m very much looking forward to playing it live. For 2016 there are also plans for an acoustic duo with fellow guitarist/composer Torsten Papenheim from Berlin. 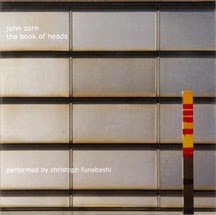 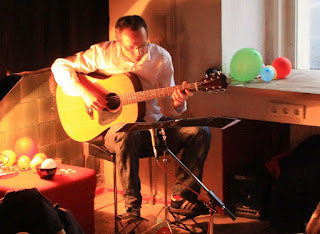 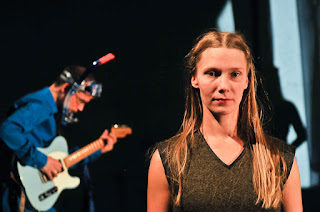 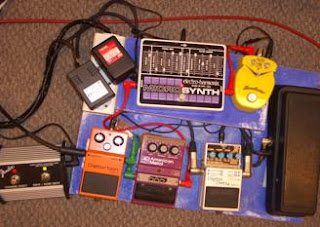 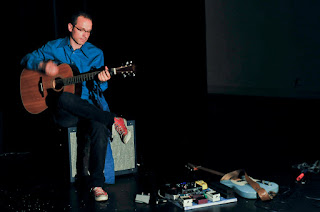 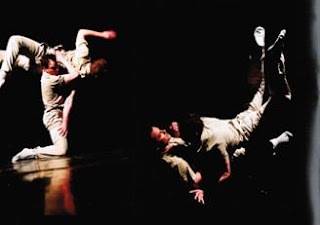 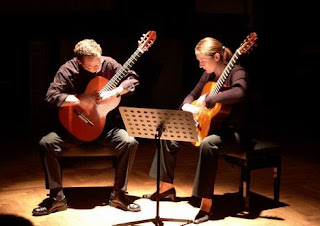 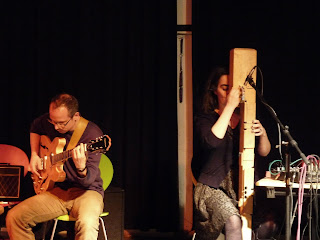 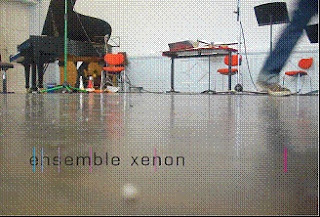 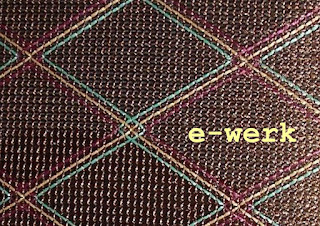 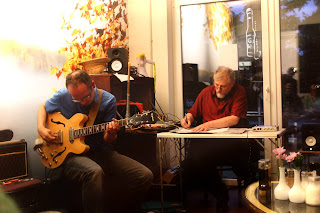 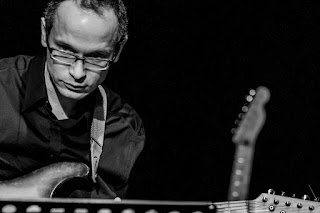