Lou Reed, Metal Machine Trio: The Creation of the Universe

Metal Machine Music, subtitled *The Amine β Ring, is the fifth solo album by American rock musician Lou Reed. It was originally released as a double album by RCA Records in 1975. A departure from the rest of Reed's catalog, Metal Machine Music is variously considered to be a joke, a grudging fulfillment of a contractual obligation, or an early example of noise music. The album features no songs or even recognizably structured compositions, eschewing melody and rhythm for an hour of modulated feedback and guitar effects, mixed at varying speeds by Reed. In the album's liner notes he claimed to have invented heavy metal and asserted that Metal Machine Music was the ultimate conclusion of that genre.

Passion--REALISM--realism was the key. The records were letters. Real letters from me to certain other people. Who had and still have basically, no music, be it verbal or instrumental to listen to. One of the peripheral effects typically distorted was what was to be known as heavy metal rock. In Reality it was of course diffuse, obtuse, weak, boring and ultimately an embarrassment. This record is not for parties/dancing/background romance. This is what I ment by "real" rock, about "real" things. No one I know has listened to it all the way through including myself. It is not meant to be. Start any place you like. Symmetry, mathematical precision, obsessive and detailed accuracy and the vast advantage one has over "modern electronic composers." 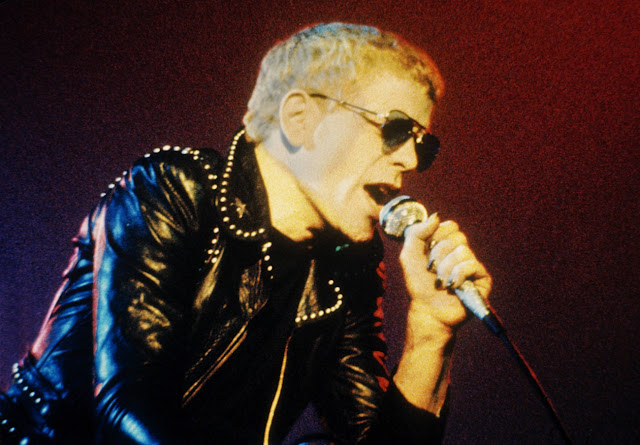 They, with neither sense of time, melody or emotion, manipulated or no. It's for a certain time and place of mind. It is the only recorded work I know of seriously done as well as possible as a gift, if one could call it that, from a part of certain head to a few others. Most of you won't like this and I don't blame you at all. It's not meant for you. At the very least I made it so I had something to listen to. Certainly Misunderstood: Power to Consume (how Bathetic): an idea done respectfully, intelligently, sympathetically and graciously, always with concentration on the first and formost goal. For that matter, off the record, I love and adore it. I'm sorry, but not especially, if it turns you off.

One record for us and it. I'd harbored hope that the intelligence that once inhabited novels or films would ingest rock, I was, perhaps, wrong. This is the reason Sally Can't Dance--your Rock n Roll Animal. More than a decent try, but hard for us to do badly. Wrong media, unquestionably. This is not meant fo the market. The agreement one makes with "speed". A specific acknowlegment. A to say the least, very limited market. Rock n Roll Animal makes this possible, funnily enough. 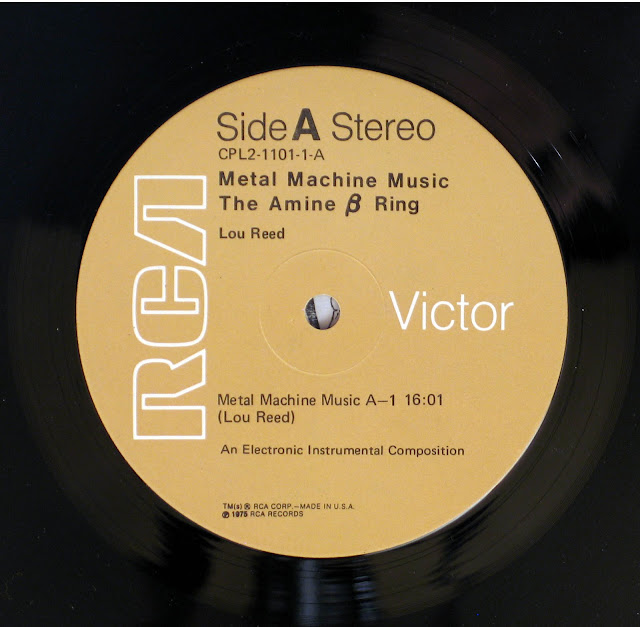 The misrepresentation succeeds to the point of making possible the appearance of the progenitor. For those for whom the needle is no more than a toothbrush. Professionals, no sniffers please, don't confuse superiority (no competition) with violence, power or the iustifications. The Tacit speed agreement with Self. We did not start World War I, II or III. Or the Bay of Pigs, for that Matter. Whenever. As way of disclaimer. I am forced to say that, due to stimulation of various centers (remember OOOOHHHMMM, etc.), the possible negative contraindications must be pointed out. A record has to, of all things Anyway, hypertense people, etc. possibility of epilepsy (petite mal), psychic motor disorders, etc... etc... etc.
My week beats your year.


The album cost Reed credibility in the music industry while simultaneously opening the door for some of his later, more experimental material. Although panned by critics since its release, Metal Machine Music is today considered a forerunner of industrial music, noise rock, and contemporary sound art.

A major influence on Reed's recording was the mid-1960s drone music work of La Monte Young's Theatre of Eternal Music, whose members included John Cale, Tony Conrad, Angus Maclise and Marian Zazeela. Both Cale and Maclise were also members of the Velvet Underground (Maclise left before the group began recording). 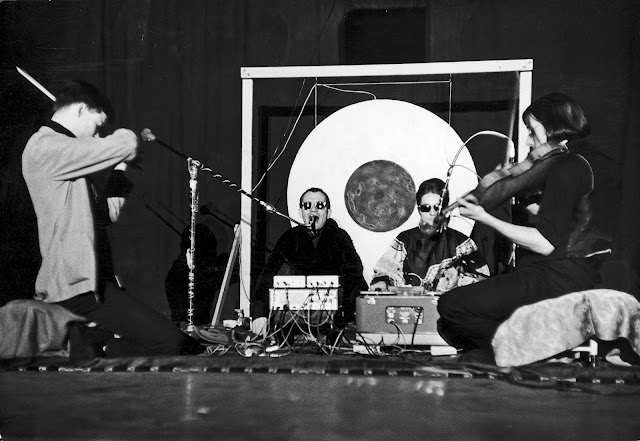 The Theatre of Eternal Music's discordant sustained notes and loud amplification had influenced Cale's subsequent contribution to the Velvet Underground in his use of both discordance and feedback.

In an interview with rock journalist Lester Bangs, Reed claimed that he had intentionally placed sonic allusions to classical works such as Beethoven's Eroica and Pastoral Symphonies in the distortion, and that he had attempted to have the album released on RCA's Red Seal classical label; it is not clear if he was being serious, although he repeated the latter claim in a 2007 interview.

Speaking of clearing out crap, I once had this friend who would say, "I take acid at least every two months & JUST BLOW ALL THE BAD SHIT OUTA MY BRAIN!" So I say the same thing about MMM. Except I take it about once a day, like vitamins. 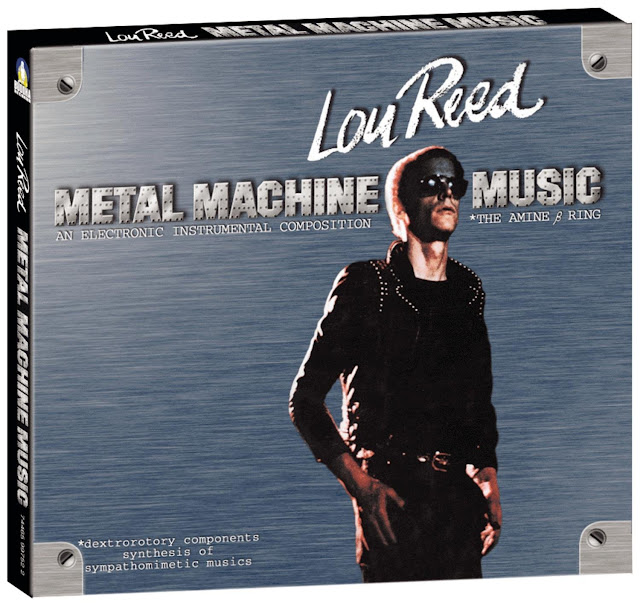 On release, it was reviewed in Rolling Stone magazine as sounding like "the tubular groaning of a galactic refrigerator" and as displeasing to experience as "a night in a bus terminal". In the 1979 Rolling Stone Record Guide, critic Billy Altman said it was "a two-disc set consisting of nothing more than ear-wrecking electronic sludge, guaranteed to clear any room of humans in record time". (This aspect of the album is mentioned in the Bruce Sterling short story "Dori Bangs".) 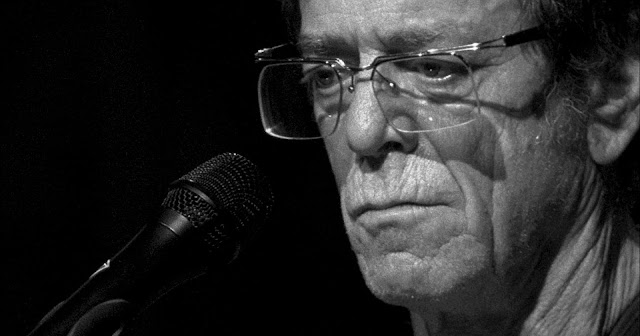 The first issue of the seminal New York zine Punk placed Reed and the album on its inaugural 1976 issue, presaging the advent of both punk and the discordance of the New York No Wave scene. To quote critic Victor Bockris, Reed's recording can be understood as "the ultimate conceptual punk album and the progenitor of New York punk rock". 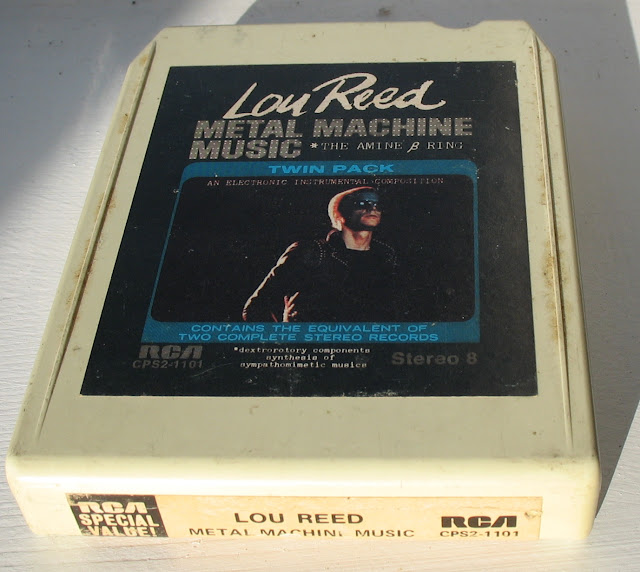 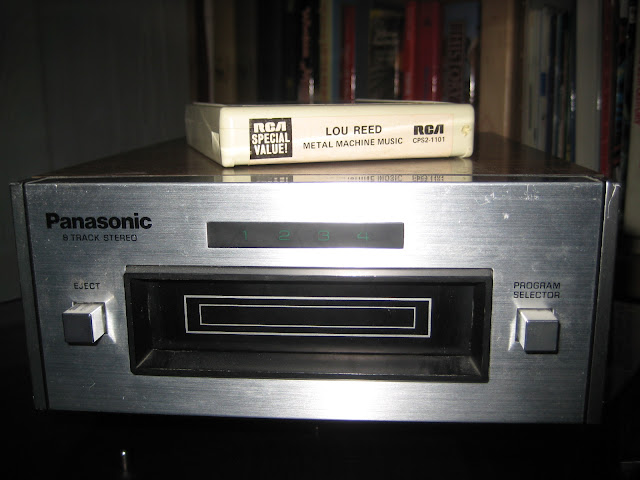 The album was ranked number two in the 1991 book The Worst Rock 'n' Roll Records of All Time by Jimmy Guterman and Owen O'Donnell. The book expresses sympathy for legendary record cutting engineer Bob Ludwig for having to listen to the album in its entirety. (In fact, according to the liner notes of the 2000 reissue of the album, Ludwig was "totally into what Lou was doing" and compared the work to that of avant-garde classical composers Iannis Xenakis and Karlheinz Stockhausen.)

Robert Christgau referred to Metal Machine Music as Reed's "answer to Environments" and said it had "certainly raised consciousness in both the journalistic and business communities" and was not "totally unlistenable", though he admitted for white noise he would rather listen to "Sister Ray".[9] Writing for MusicHound in 1999, Greg Kot gave the album a "woof!" rating (signifying "dog-food"), and opined: "The spin cycle of a washing machine has more melodic variation than the electronic drone that was Metal Machine Music." In 2005, Q magazine included the album in a list of "Ten Terrible Records by Great Artists", and it ranked number four in Q's fifty worst albums of all-time list. It was again featured in Q in December 2010, on the magazine's "Top Ten Career Suicides" list, where it came eighth overall. The Trouser Press Record Guide referred to it as "four sides of unlistenable oscillator noise", parenthetically calling that assessment "a description, not a value judgment".

Probably the most sympathetic appraisal of Metal Machine Music was given by rock critic Lester Bangs, who wrote that "as classical music it adds nothing to a genre that may well be depleted. As rock 'n' roll it's interesting garage electronic rock 'n' roll. As a statement it's great, as a giant FUCK YOU it shows integrity—a sick, twisted, dunced-out, malevolent, perverted, psychopathic integrity, but integrity nevertheless." Bangs later wrote a tongue-in-cheek article on Metal Machine Music titled "The Greatest Album Ever Made", in which he judged it "the greatest record ever made in the history of the human eardrum".


I predict by that time the general public will have grown ears and gotten hip enough to appreciate Metal Machine Music, so this follow-up, which I'm gonna call Triumph of the Will, will be the best-selling LP of all time and those ratfucks in Chicago can suck my asshole along with that little blob Elton John who could use some speed almost as bad as Leslie West but can't have any of mine, because as I think it was Pat Ast said in that fabulous review of Coney Island Baby in the Soho Weekly News 'I have seen rock's future and its name is Lou Reed'"), a double album, you ask? Simple- the two discs are, according to Lou, symbolic of two tits ("There's never more than two," he explained), to signify that this is, albeit mechanized, a very sexy album designed to cut in heavily on the hot Barry White market.

Despite the intensive criticism (or perhaps because of the exposure it generated), Metal Machine Music reportedly sold 100,000 copies in the US, according to the liner notes of the Buddah Records CD issue. The original edition was withdrawn within three weeks of its release. 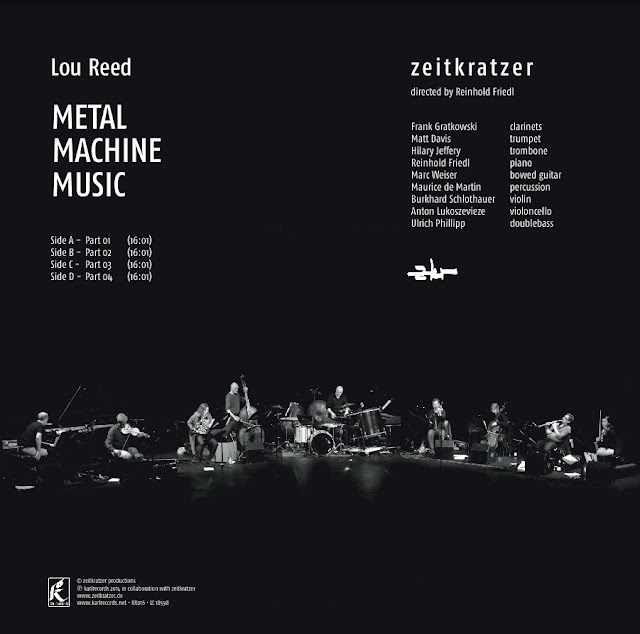 Lou Reed didn't perform Metal Machine Music on stage until March 2002, when he collaborated with an avant-garde classical ensemble at the MaerzMusik festival in Berlin, Germany. The 10-member group Zeitkratzer performed the original album with Reed in a new arrangement featuring classical string, wind, piano, and accordion. A few years later, he formed a band named Metal Machine Trio as a noise rock/experimental side project.

Cranbrook Art Museum will present the audio installation of Metal Machine Trio: The Creation of the Universe, a live ambisonic 3-D sound installation inspired by Lou Reed’s controversial 1975 double album Metal Machine Music. Originally presented by the University Art Museum, California State University Long Beach (UAM, CSULB) in 2012, where Lou Reed worked in collaboration with the acoustic specialists at the Arup Engineering SoundLab in New York, Reed was able to recreate, for museum visitors, this groundbreaking composition from exactly the same acoustic perspective he had while performing it onstage.

The installation at Cranbrook Art Museum, housed in just  a small black room, the exhibit is made up of a live ambisonic 3D installation that utilizes 12 loudspeakers to create a fully immersive sound experience. It’s designed to replicate the Metal Machine Trio, a live band version of the album formed by Reed, Ulrich Krieger and Sarth Calhoun in 2008.

The live recording of Metal Machine Trio: The Creation of the Universe took place at the Blender Theatre in New York in 2009. The improvising trio included Lou Reed, Ulrich Krieger and Sarth Calhoun.

The exhibition at Cranbrook is presented by Cranbrook Art Museum in collaboration with Sister Ray Enterprises, Inc., Arup Engineering SoundLab and HARMAN and is curated by Christopher Scoates, who now is the Maxine and Stuart Frankel Director of Cranbrook Academy of Art and Art Museum, and Raj Patel, a leading international acoustics, audio-visual, and multimedia consultant and designer with Arup. The exhibition at Cranbrook Art Museum is made possible with the support of Julia Reyes Taubman and Robert Taubman.