One can look at seeing; one can not hear hearing.

"One way to study music: study Duchamp." An impressive line John Cage once mentioned. The friendship between these two creative minds reveals their mutual concern with the conventional perception both on the artistic creation and the spectator’s expectation. To Cage, for instance, silence was a compositional tool, a vivid explanation of what can be music. For Duchamp, however, making music meant going beyond the technical exploration of musical composition. Duchamp explored whether one is able to visualize sound and combine it with language by playing music in a random kind of order, in other words, to create something artistic by chance.

A scene of Duchamp, Teeny, and Cage playing chess, 1968

Duchamp’s first musical work, Erratum Musical, is a score for three voices derived from the chance procedure. During a New Year’s visit in Rouen in 1913, he composed this vocal piece with his two sisters, Yvonne and Magdeleine, both musicians. They randomly picked up twenty-five notes from a hat ranging from F below middle C up to high F. The notes then were recorded in the score according to the sequence of the drawing. The three vocal parts of Erratum Musical are marked in sequence as "Yvonne," "Magdeleine" and "Marcel." (Duchamp replaced the highest notes with the lower ones in order to make the piece singable for a male voice.) The words that accompanied the music were from a dictionary’s definition of "imprimer" - Faire une empreinte; marquer des traits; une figure sur une surface; imprimer un scau sur cire (To make an imprint; mark with lines; a figure on a surface; impress a seal in wax).

The title "Erratum Musical" can be translated as "musical misprint." Thus, the book or "text" and the title conjure a dialectic relation between seeing and hearing. Picked from a dictionary, the "text" itself is already a readymade. Through a random order, the meaning of the text/readymade is reproduced and transformed by the repetition of the text. 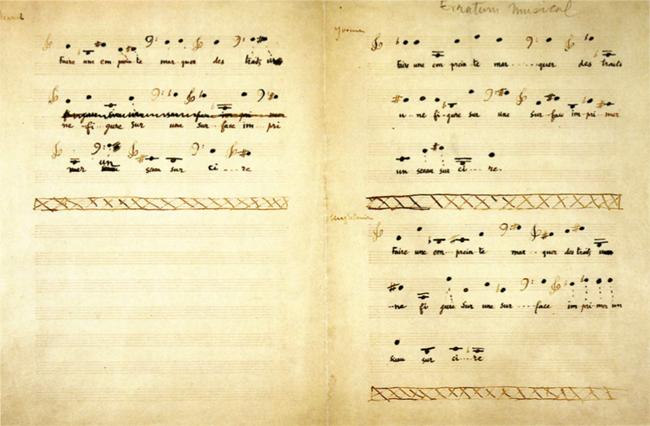 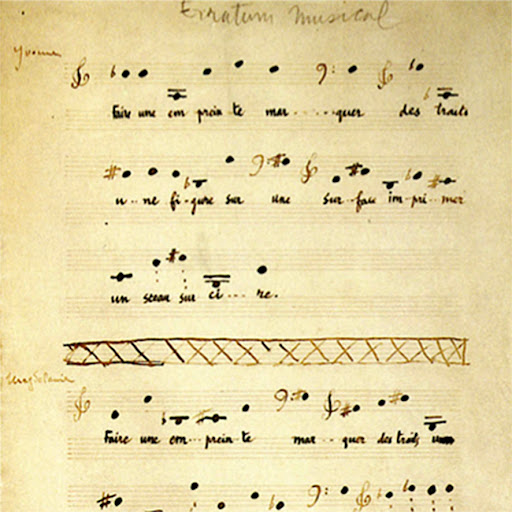 Erratum Musical, From the Green Box, 1934


The final representation of this musical "visualizes" the process of hearing a scene of imaginative landscape, as if one is able to see the music through its vocal expression, through its performance or individual interpretation. In other words, the aesthetic experience of listening to a piece of music is transformed into an abstract experience of experiencing an abstract space.

One seems to be able to sense the existence of a space in terms of the flow of the layering of the rhythms/voices. Furthermore -- and what is very intriguing -- this sense of space visualized by the sound/music seems analogous to an abstract experience of a sculptural space. In this case, Duchamp let chance be the creator and make the final decision.

Erratum Musical was first performed publicly by the Dada artist Marguerite Buffet at the Manifestation of Dada on March 27, 1920. This earliest performance resulted with restless rustling, shouts and whistles from the audience. The version playing here was from the CD entitled "Marcel Duchamp / The Creative Act," 1994, No. 6 Erratum Musical (1:38), with Jean-Luc Plouvier as Marcel, Marianne Pousseur as Yvonne and Lucy Grauman as Magdeleine.

They perform the three voices simultaneously in different tones. Through the combination of high/low, near/far of the singing, Erratum Musical is visualized/sculpturalized as though one can sense a space contained in its experimental musical landscape. Although Erratum Musical was created in the early 20th century, it is still fully functional to challenge the conventional experience and the musical connoisseurship of today’s general audience.

Erratum Musical is written for three voices, included in the Green Box, which Duchamp published in 1934. It is undated, but has always been ascribed as having been written in Rouen in 1913. It was probably written during one of Duchamp's visits to his family, as his parents and sisters lived there. Duchamp wrote the piece for his two sisters and himself--each part is inscribed with a name: Yvonne, Magdelaine, Marcel. The three voices are written out separately, and there is no indication by the author, whether they should be performed separately or together as a trio.

In composing this piece, Duchamp the made three sets of 25 cards, one for each voice, with a single note per card. Each set of cards was mixed in a hat; he then drew out the cards from the hat one at atime and wrote down the series of notes indicated by the order in which they were drawn.