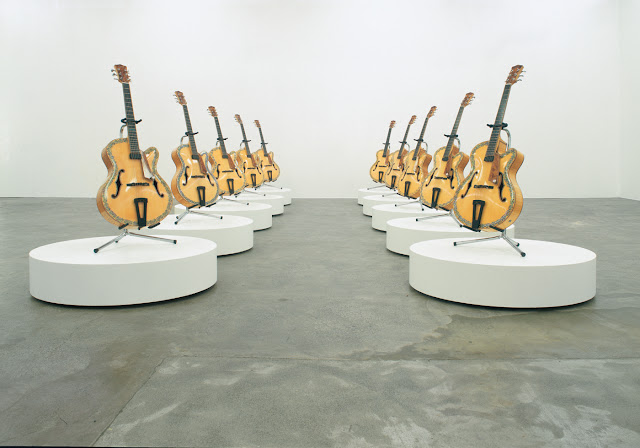 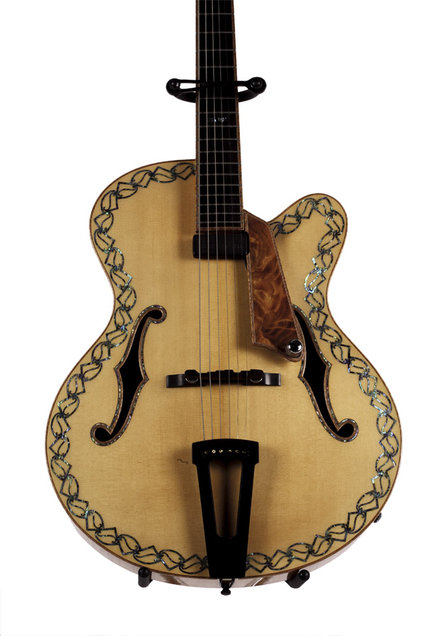 Ten Guitars is a work by Michael Parekowhai. Parekowhai is one of New Zealand’s most important contemporary artists. In addition to an extensive exhibition history, his work is held in significant public and private collections in New Zealand and Australia, as well as in several permanent collections across the Asia-Pacific region and in Europe.

In the 1960s the guitar became a "Happy Maori" trademark, the ultimate party instrument - everyone played. And the "boom-chucka-boom-chucka" Maori strum, with the strumming hand damping the strings, was something distinctive. They say mimicry occurs where colonialism has done its work, but for Michael Parekowhai it was the Maori who colonised the guitar, not the other way round. For his Ten Guitars show, Parekowhai created ten customised hollow body guitars, jazzed up with paua inlays reproducing classic Maori kowhaiwhai patterns, and branded "Patriot" on their machine heads. 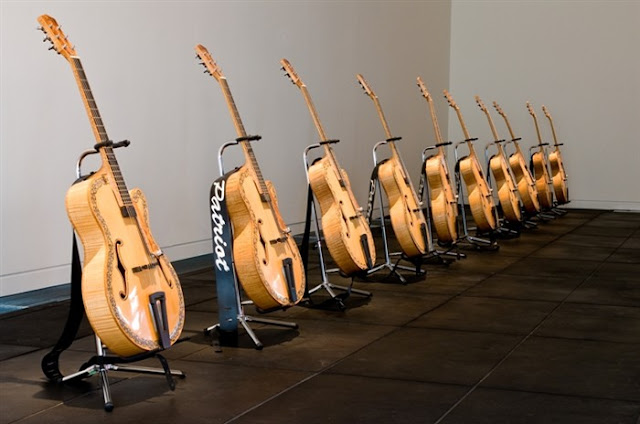 These are flashy instruments for performers, entertainers, name artists, show-offs. The project is an obvious nod to Engelbert Humperdinck, whose song Ten Guitars is an old Maori standard, having topped the Maori charts back in the 1960s. Promoting a utopian social ideal of playing together in harmony - a bicultural idea - the anthem is something Maori took to their hearts and claimed as their own. "Sometimes I wonder if they could appropriate Duchamp in the same way", says Parekowhai. 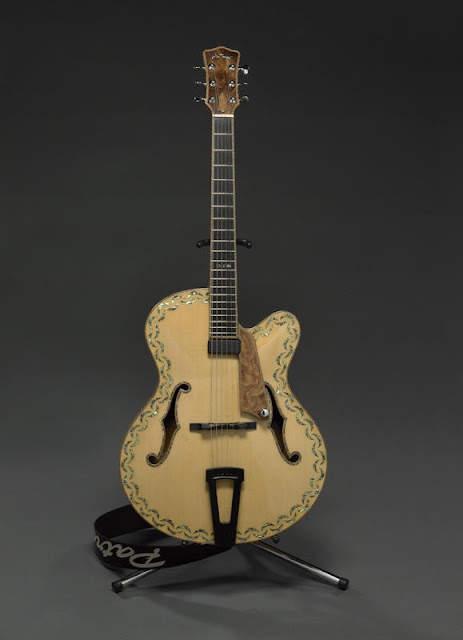 Play On was the first in an occasional series of curated exhibitions designed to investigate the relationships between sound and art, generated from the Adam Art Gallery’s unfolding Sound Check research programme. For this exhibition curator Christina Barton brought together four major works produced in the 1990s by leading New Zealand contemporary artists, and staged these referentially-rich installations alongside a newly commissioned work.
Julian Dashper’s The Big Bang Theory (1992-1993), Michael Parekowhai’s Ten Guitars (1999), Slave Pianos’ [Michael Stevenson, Danius Kesminus, Rohan Drape & Neil Kelly] Slave Pianos (of the Art Cult) (1998-1999), and Terry Urbahn’s The Karaokes (1995-1997), were joined by Ava Seymour’s 11 Bars of Oboe (2010). Each work uses an aspect of music as a metaphor for thinking about art and art history. 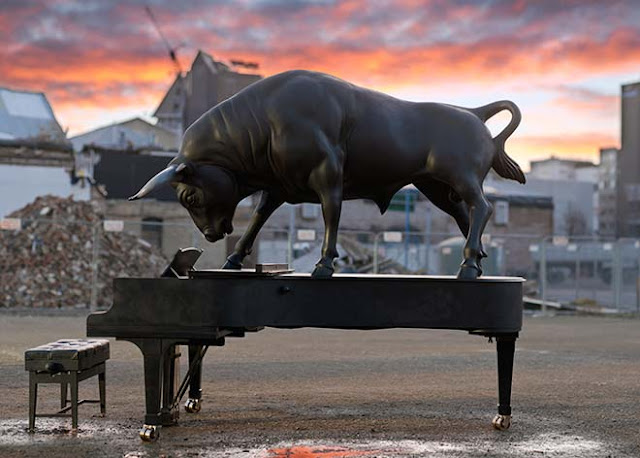 Considering the significant ways these installations reflect the social, cultural and critical turns of the 1990s and beyond, and drawing connections between them in terms of their use of music as both subject and form, Play On raised important questions about what art is and how culture works. 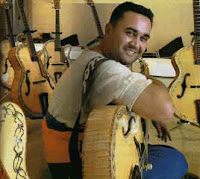