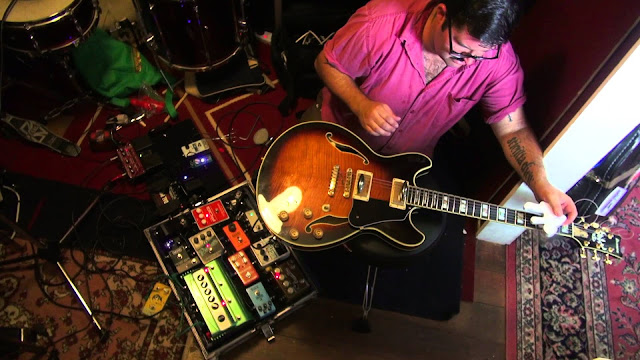 Joel Vinsen (b. 1984) is a guitarist, composer and improviser, based in Auckland, New Zealand.
Joel has been described as playing the guitar with ‘equal parts respect and contempt’, his pedal board has been described as excessive, and his musical output as eclectic. He is 1/2 of Panhandlers (spoken word & soundscapes), 1/3 of Baby Took My Dingo/Plastic sheep (improvised noise trio), 1/7 of Spiral (upbeat groove collective), and 1/12 of Ijebu Pleasure Club (afrobeat). He also works with a variety of singer songwriters (Callum Gentleman, Cricketfarm), plays in a country band, is an active member of Vitamin S (Auckland collective of improvising musicians) does freelance Jazz and session work, and teaches itinerant guitar in schools. 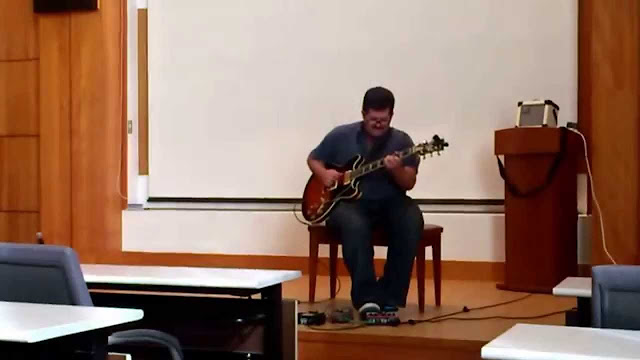 Joel has performed in Australia, Samoa, India, Sri Lanka, throughout New Zealand, and in numerous countries aboard a cruise ship; he claims that he once played a solo on ‘Autumn Leaves’ that started in Miami, and ended in international waters. He has also played on a train, on a boat, in a number of sea caves, and in the rain. 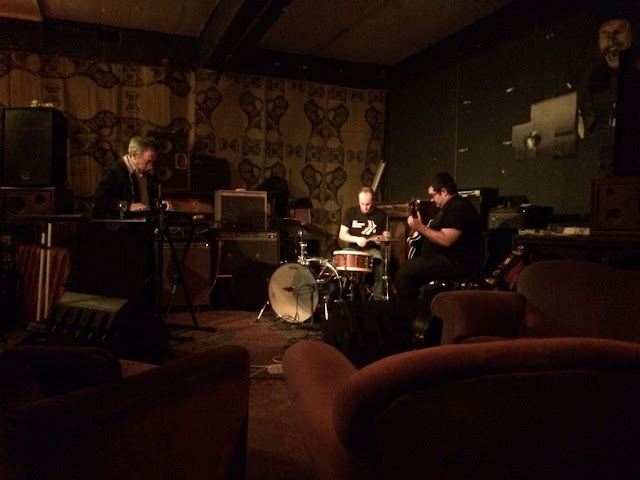 Joel holds a Diploma in Contemporary Music Performance (MAINZ), and a Bachelor of Music (Jazz) from the NZSM, and in 2014 was an artist in residence at the Toji Cultural Centre in Gangwan-do, South Korea. 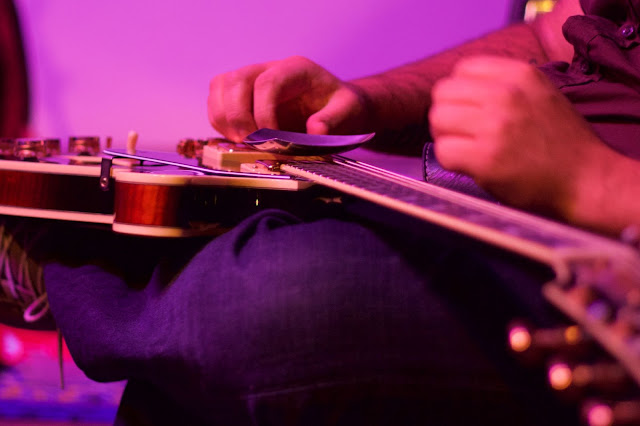 Here’s a photo of the setup from a recent Panhandlers gig. 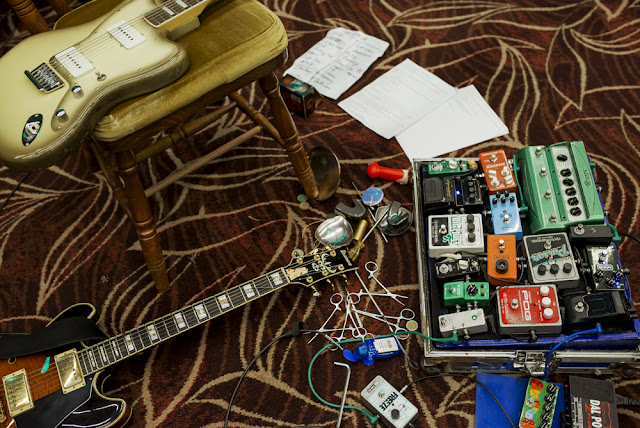 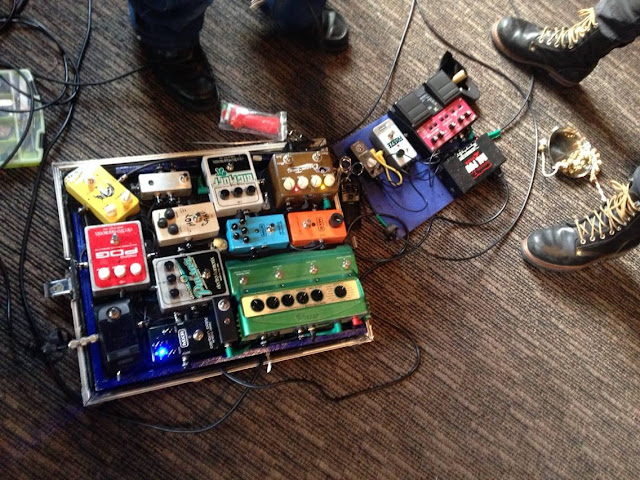 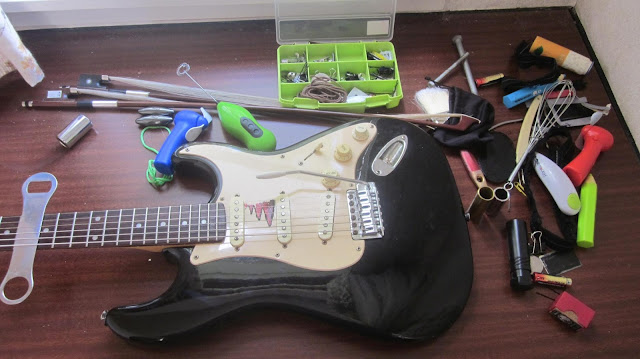 In regard to improvising, sometimes I want a sound that I am familiar and comfortable with, and sometimes I look for sounds that I don’t know so well and can react to. I really enjoy unpredictable pedals (e.g Zvex fuzz factory) and preparations. Fragility, anxiety, uncertainty etc can sound really beautiful;  and sometimes I play better when I feel uncomfortable. The challenge is to be ok with being uncomfortable; putting music before the self, which I really struggle with sometimes. I also like space! And I abuse reverse delay constantly.

I’m also really like dissonance, and I often use it intentionally. I’m working towards also being able to use it accidentally too; reacting objectively rather than getting flustered and breaking the 4th wall or whatever when I make mistakes. long term I’m trying to hear all sound as having the potential to be music, but I have plenty more work to do!

In regard to writing, I like quirky guitar parts, and I often look for sounds that have the same function or fill the same sonic space as a really idiomatic sound (e.g. clean strat sound), but aren’t as immediately recognisable. So I tend to layer multiple pedals on mild settings, and ride the tone and volume until I find sound that works. Sometimes when I get stuck I try and imagine characters to sound like e.g a group (flock?) of evil clowns, or a hokey gypsy jazz wedding player, which is helpful as I work well within a box.

In 'Inerti(argh)', I use surgical haemostats as single string wobbly capos, and buzz magnets for notes past the highest frets, and to get a low ’sub’ sound over the pickups. I got both of those techniques from listening to Bill Horist. 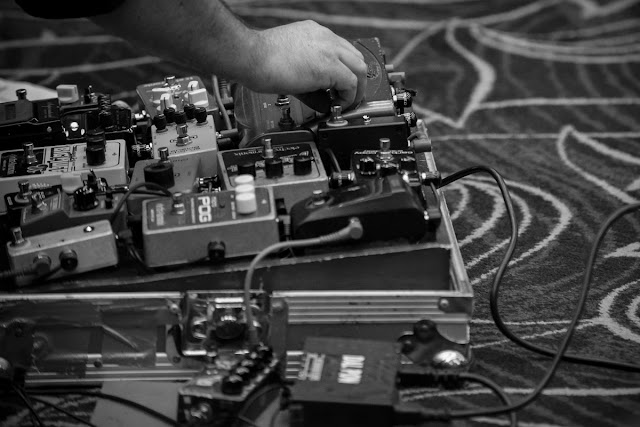 Brydie Photograpy
Kebab skewer through the strings near bridge, bowed with a pocket fan; drone effect with moving harmonics.

With reverse delay (Line 6 dl4) if I want the drone to have a pulse.

Coin in strings near bridge, hit it, or ‘excite’ it with a slide, for vocal type groans and gong sounds.

All of the above you can see and listen to in the Panhandlers video. 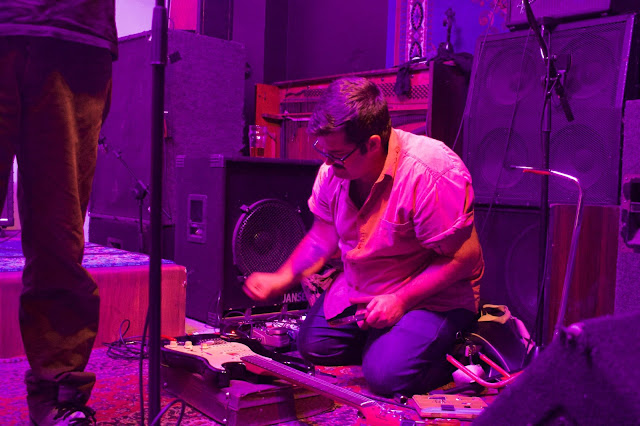 Kebab skewer in the strings at 12th fret; rattling sort of sound.

Slide in right hand for the bird noises. 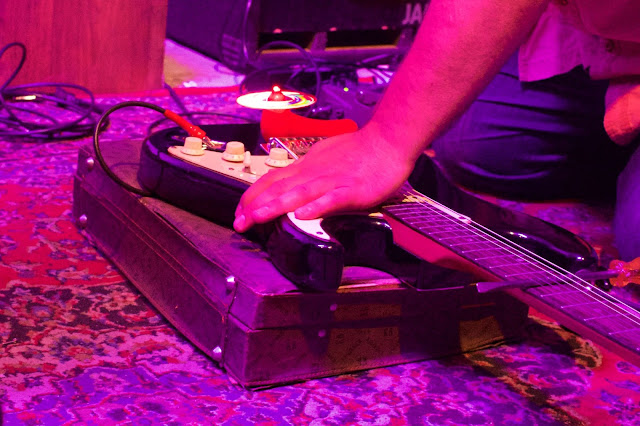 Photo by Derek Tearne
Panhandlers ‘Running’: Buzz magnets over the pickup for the gong sound, and at various high frets for clanking stuff

Badge (the round type that you pin on clothing) as a slide; ‘zitherish’ sound.

Ebow; once the string is vibrating you can push the ebow down to stop it for throttled screaming sounds
I also use reverse delay on most of the above. 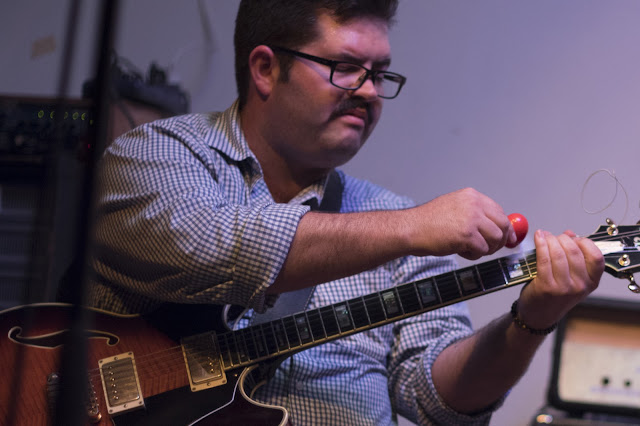 Photo by Derek Tearne
In ‘Bedroom’ I set the keypad sounds on my cellphone to Chinese spoken, then play them through reverse delay to get the voices sound, and loop and layer. The scraping sounds are just my fingers scraping the strings between the pickups through a reverse delay.

In Anxiety, I kind of bow a rock with a slide, which is a technique of Susan Alcorn's. She does it way better!

I guess it depends on each individual musician. For me personally, recently I been working on alternate techniques for anxious/jarring/clangy sounds that I can make with really poor technique (that physically hurts), whilst staying relaxed and free of tension. I’m trying to avoid injuring my hands!

My prepared guitar technique has developed freely through improv and experimentation. Also from watching/listening to others (Fred Frith and Bill Horist especially), and while driving or exercising; visualising possible combinations of preparations and pedals and how they might react with the guitar. I really like how preparations (and pedals), can have a will of their own; there’s another voice to listen to in the ensemble.

Some new Panhandlers pieces (e.g Running) require a soundtrack/photo collage approach; using sounds to reinforce scenes or lyrics, so I’ve been exploring prepared guitar technique with some reasonably literal (but still somewhat abstract) moods/sounds in mind, e.g, a bell type sound, the sound of metal being hammered in a shipyard, a zither. I’m also now using a Boomerang III phrase sampler, which can run multiple independent loops in a non-linear fashion, so I can bring ‘themes’ or sounds in and out throughout the ’soundtrack'. And I have a baritone, which has less string tension and responds differently to preparations. So I’ve been working on specific technique to play my new gear.

So technique can be a way to achieve specific sounds, and also a source of sound in itself. And a preventive measure in terms of hand injury etc. I think it is as relevant to the music as the artist wants it to be. I don’t think technique is always necessary to make music, and there’s also nothing wrong with really technical music; it really depends on the sounds that you want to achieve and your own personal taste.

'Fred Frith and Evelyn Glennie improvising’. Traditionally we measure music in rhythm, pitch and harmony, which are logical and pragmatic ways of organising/grouping sound in such a way that we can communicate . But these are optional, malleable, and very much open to interpretation; it’s all just sound. Fred Frith and Evelyn Glennie's performance changed the way that I approach the guitar, and opened me up to the idea that all sound has potential to be music.

Where are your roots? What are your non-musical influences?

My roots are listening to music; I was pretty obsessed from about 6 years old, and it didn’t really occur to me to play guitar until I was about 16. I have pretty eclectic taste (but I’m picky), and still spend more of my free time listening rather than playing.

I generally prefer interpretation to literal representation; I enjoy hearing or seeing the world from another perspective that I may not have considered myself.

My taste seems to broaden over time; sometimes I enjoy being made uncomfortable, sometimes I want to hear something really nasty/discordant/grating, or look at work that I perceive as ugly or unpleasant, etc. I think as I get older I don’t feel so much pressure to feel happy all the time, and recognise that (for me at least) emotions and moods that I sometimes think are negative are a crucial part of being a human being, and appreciate that in art too.

What quality do you most empathise with in a musician?

We live in a pretty black and white world where everything is quantifiable and can be measured. You get paid this much, that thing costs that much, be there at this time, with this number of these things. Music/art touches on something we can’t really measure or define. Its human; it’s never perfect, there’s no real way to measure it, and we don't all agree on what we’re trying to measure anyway. And it’s fun!

I think the main challenge is financial; streaming etc doesn’t really provide much in the way of income, and there is a wide range of entertainment competing for people’s time. It’s a lot harder to make a living as a professional musician that it has been in the past. Making money from original music is extremely difficult too, although I think that has always been a struggle.

However, I think the benefits outweigh the challenges. For a listener, and for an artist who finds inspiration in the work of others it is incredible; for the last 15 or so years I’ve discovered most of the music I like through the internet. There are so many great artists whose music isn't commercially viable that we wouldn’t have access to if not for the internet; it’s especially great for niche genres, e.g. prepared guitar! Money is less of a barrier to recording and releasing music; home recording is achievable at a low cost for the average artist, and releasing it online is effectively free. Bandcamp is fantastic, effectively cutting out the middle man and paying the artist directly. And I do think that people who are active listeners are fairly conscientious about paying for music.

I disagree completely with the whole ‘today’s music is shit’ thing. There is a greater variety of excellent music than ever before, but it isn't going to be presented to you on commercial radio. It takes a little work to find it, but far less than having to physically sift through record bins! People often talk about great bands from the past e.g, the Beatles, Led Zeppelin, Queen etc and I agree that they are incredible. However they are pretty similar and they all have similar influences; music that was commercially available and easily accessible for the average person pre-internet was pretty narrow.

Nowadays an artist might draw influence equally from Slayer, D'Angelo, Hindustani classical, St Vincent, and Can. It is important to have listened to a wide range of music in order to develop our taste; if we haven't, we may dismiss something that has the potential to really resonate with us, just for lack of familiarity. Basically the onus is on us as both listeners and musicians; if we care about music, we need to do some work listening to it!

Panhandlers are working on a long form piece, which we’re planning to tour. I’m also working sporadically on a solo set along the lines of inertia and Birds. Playing solo is terrifying but I will eventually have enough material that I can’t avoid it anymore. 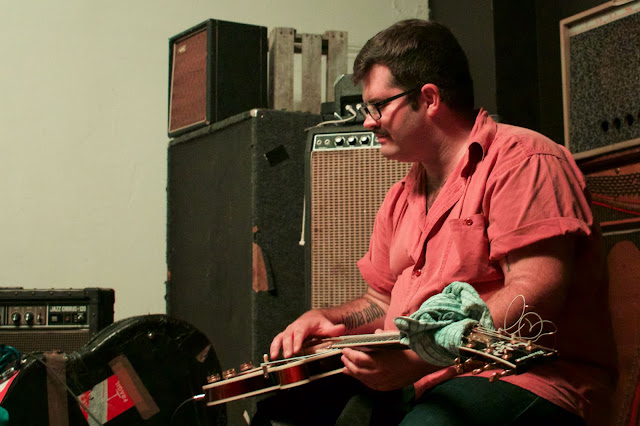 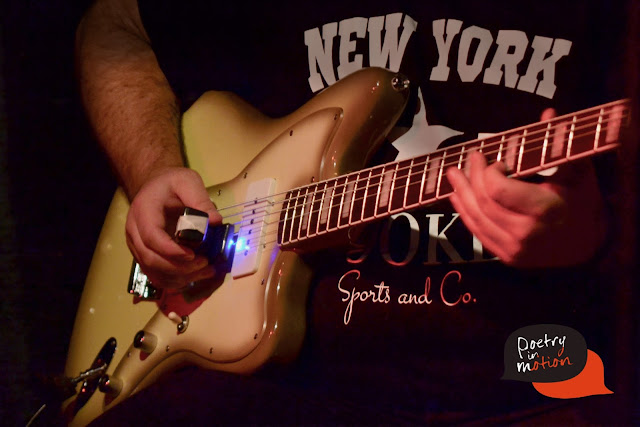 Photo by Duncan Gibson
I feel like there’s still a bit of a dichotomy between my improv playing and my playing in a more conventional setting; I’m working towards freely combining the two. Long term I’m hoping to keep making music, grow old gracefully and die happily in my sleep at 100 or so.

Please, recomend us about some music from New Zealand.

(I added that one) here’s what I’m listening to at the moment, you can find these on Bandcamp or youtube. 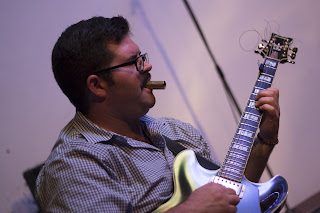 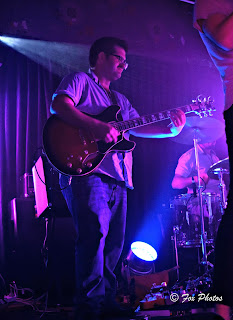