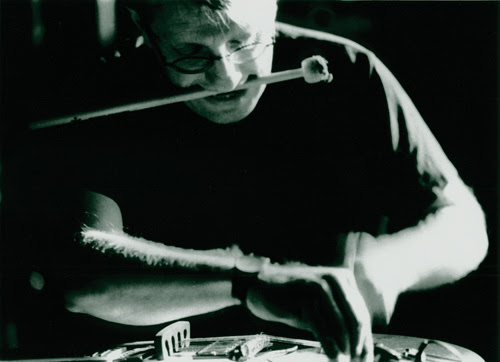 His THIRD EYE ORCHESTRA open form compositions for large ensembles and live sound processing, or laptop/electronic ensembles, are inspired by Earle Brown’s Available Forms, and based on numerous scored “building blocks” that are constantly rearranged when performed.

His works have been presented on festivals in the US, Canada, Mexico, Russia, India, South Africa and all over Europe. He recorded on labels such as Innova, ESP-DISK, Nur/Nicht/Nur, Creative Sources, Leo Records, Potlatch, Cadence, Clang and Hybrid. 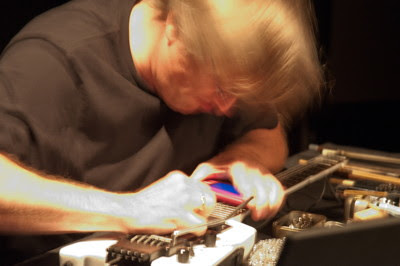 Which was the first instrument you do remember?

When I was 15, my grandfather gave me an old acoustic guitar he had lying around in the basement. I went home, and remember that night playing and pressing the guitar against the heating pipes, which resonated through the room, and then got carried upstairs to my parent's living room. It seems I couldn't get off that mindset ever since.

The guitar was pretty beaten up, but it's the one I worked with until I got an electric. Do I love the guitar? I have no idea what would have happened if my grandfather would have gotten me a different instrument. But it's a very flexible one, works well in many different styles, and its electric versions give you options you don't have with many other instruments. I don't think I could have developed a similarly tight integration of instrument and software through audio analysis with an acoustic instrument plus microphone.

My 1998 recording "Endangered Guitar". The one in the metal box.  This is from the period where I determined my own voice. We also recorded with the electric pickups, my built-in contact mikes AND several microphones across the table at the same time - so it has a sonic clarity that you can only get in the studio.

A steady stream of income.

A friendly distance. I often collaborate with artists from other disciplines, and some artists' works just blow me away. However, generally I do not get too much inspiration from other art forms except the digital media arts.

The room. Every room - and of course, the sound system has an impact, too - sounds different, and requires me to work in different ways. No two concerts are the same, because the same sound can have a very different effect in a different room.

If you're thinking of gadgets, I'd like to mention my beloved loudspeaker magnet, one that I use for about 20 years now. It's heavy, and when positioned right over the bridge pickup, it vibrates slowly, but fast enough to create frequencies in the audible range - albeit very, very low. No effects needed - that's a brutal bass sound you can't get with a computer...

In the 90s I took a few composition lessons with Klaus König in Germany. I brought my pieces to him, and he felt that they were full of too many underdeveloped ideas. He taught me how to develop each idea independently, and make a piece out of that idea alone.

I think that's what eventually led to my fascination with minimalism. You'll hear it e.g. on my 1998 Endangered Guitar CD - each piece centers around one idea. When it's done, it's done.

What quality do you admire most in a musical instrument?

That you can articulate your ideas. For my Endangered Guitar works I use a cheap Steinberger Spirit. To interact with the software I wrote, I need a guitar that is sonically not overwhelming, and the Steinberger is great in that respect. That's a totally different approach from playing my Peter Coura Strat that he built 25 years ago - it has a very special sound, much warmer than a regular Strat, and is great for regular guitar stuff.

I recently started playing guitar duos with Dom Minasi, and for that I use a big fat old German jazz guitar, probably made in the 60s or earlier. I played Freddie Green stuff in a fake Count Basie band with that one, it is awfully loud and percussive. Playing it requires hard work, but it forces you to concentrate on your technique, you can't just noodle around.


What means composition for you?

I became more interested in being a composer than an instrumentalist. Writing for other instruments than your own is a whole different ball game, and it opens possibilities much beyond the limitations of your own instrument. My Third Eye Orchestra will have its 10th anniversary this year, in the last decade I wrote and conducted all the material. I mean, I can write a complex chord and distribute the voices over 15 people - string and wind quartets, pianos and what have you - THAT fun I can't get from a guitar.

Miles I guess. During the Bitches Brew period and beyond. He coaxed the best out of his musicians, and put them in the position where they sounded perfect.

There is no good or bad instrument. You have a goal, and for that you find the correct guitar. And as I stated above, a $300 guitar might be better suited for certain approaches than a $3000 one. Or a $100 one: a while ago we had this "$100 Guitar Project", and this cheap guitar passed through the hands of over 65 players. Each of which recorded a piece with it, and then passed it on to the next player - the recordings came out on CD (http://www.bridgerecords.com/products/the-100-guitar-project/) on Bridge Records. The guitar resonated well in the low register. It inspired me to coax the lowest possible sound out it, by squeezing a metal ring between the strings, close to the bridge. After that I've done it to my other instruments, too, but none of those packed that kind of punch.

Charles Ives for the polytonality; Steve Coleman, Igor Stravinsky and Steve Reich for rhythmic complexity and phase techniques; Karlheinz Stockhausen when it comes to organizing sound; Richard Wagner and Richard Strauss for timbre. I use baroque canon techniques a lot, and when it comes to the guitar, it's going back to Pete Cosey and Sonny Sharrock.

In June I'm organizing a festival around a performance of a large ensemble of electronic instruments, the "Dark Circuits Orchestra". The festival organization keeps me busy, and writing the piece for the ensemble performance isn't done in a week either. That's probably it for the first half of the year...