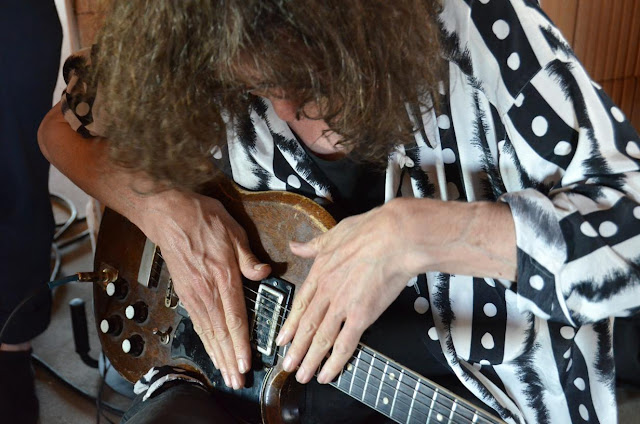 Jean-François Pauvros is a French musician, electric guitarist and improviser, born in 19 October 1947 in Hautmont, Nord. He was french teacher before living from music, and began his career playing in dance halls. Influenced by guitarists like Derek Bailey, and perhaps by Lightnin' Hopkins and Charlie Christian. Natural improviser, the guitarist and composer JF Pauvros, based on voluptuous or touching air, pushes the limits of his instrument sound ...

A guitarist with an inimitable technique well known on the New York scene. He has composed and played with musicians such as Elliot Sharp - Arto Lindsay - Jonathan Kane - Rhys Chatam - Ernie Brooks...

His taste for musical and human encounters, which lead him to form the most improbable and cosmopolitan groups, can only find and maintain its unity subtended by a style and an original and continuous inspiration. He created the Moebius band with Gaby Bizien and Philippe Deschepper. The french talent huner Jef Gilson French recorded his first disc with Gaby Pauvros Bizien duo, whose music is close to free British music. It also participates in workshops with Peter Kowald in residence at Lille and meets Siegfried Kessler with whom he recorded in 1978.

In 1978, at the theater Mouffetard, "occupied" by The Lubat Company, he played with singer Aude Cornillac and meet trumpeter Jac Berrocal who created with him the band Catalog (where drummer Gilbert Artman succeeds Jean-Pierre Arnoux). Hathut Records releases the first disc of the group entitled Penetration. 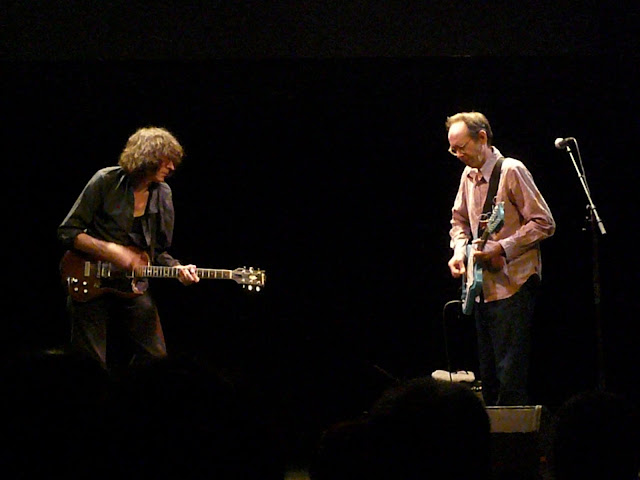 He played with Elliott Sharp and David Holmes, George Lewis, Jacques Thollot, Rhys Chatham and the 100 guitars. With Mary Genis he created a group of Steel-drum which also include reggae trombonist Rico Rodriguez.

He founded the group Marteau Rouge with Jean-Marc Foussat and drummer Makoto Sato, " the four daughters of the industry " with Jean-François Binet, Jean-Marie Messa, Jean Nirouet, Ernie Brooks, Makoto Sato, plays in duo with harpist Helen Breschand and trio with Christmas Akchoté and Jean-Marc Montera. He participate in readings, performances with the poet Charles Pennequin and Japanese poet Gozo Yoshimasu. He is the author, among other music movies, of Royal Bonbon by Charles Najman, Grey-White by Karim Dridi and La Mécanique des femmes by Jerome Missolz. He works regularly with the director Guy Girard.


I can only play with anxious, feverish musicians in love.

The echo of the sound of carnival's brass bands strolling about the walls of the city, and the sound of the claws of little cats drowned in a bucket.

I can't say I love guitar, it's as if you were asking me if i liked a part of my body.

Keeping on playing in my own way and withstanding "people who knows" 's advices.

I am satisfied when the pleasure is shared.

To go further into the consciousness of my own playing.

Everything mingles, and frequently when i play guitar i have the impression of painting, fingers dance, words are sound, speaking is music.

No difference, it's a question of skin-touch and pheromones.

The subtle mixture of his uniqueness and his universality, his frenzy, his survival instinct and his humility.

They belong to my own vocabulary, my own way of playing. I don't "use" them, it's a question of instinct.

Even in the most rigorous musics, it is when there are mistakes, scorias that pleasure comes out. To embrace to the full the present moment and the present space and to set resonances between everything. But let's not forget that improvisation does not really exist. When in a group, it is a way of mixing the unique knowledge of each individual which come together at the same time, as an immediate and transcient utopia.

No one. I am just sad I cannot play anymore with some of my deceased friends.

My next projects are multiple and unexpected : always the same purpose : along the various meetings to stay as far as possible upstanding and to give a few guitar strokes, as  derisory they can be, in the walls of this terrible world.