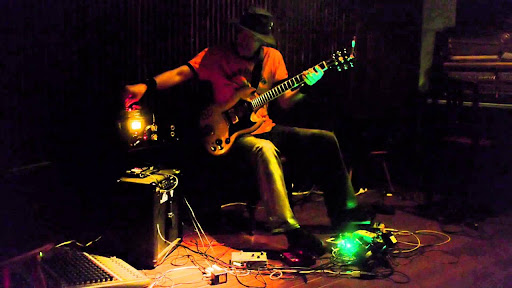 Interview with Tetuzi Akiyama in 3 acts

[Higashi-kitazawa station, North-east exit. MS searches in vain for the cafe Gendai Heights, wandering as far as Inokashira road. Despite having visited numerous times, he can't ever find the cafe by himself. Finally a call comes through on his cell phone]
MS: Hello? Tetuzi?
TA: Hi, Mark. Are you lost?
MS: Ummm, yes, I think I am.
TA: Well, where are you?
MS: Ahhhh, somewhere near to the North East exit I think...
TA: Oh, you didn't take the South East exit? Okay, I'll come to get you.
MS: Thanks! Can we meet at the North East exit?
TA: Okay. See you in 5 minutes.

Gendai Heights. Gendai Heights is a small cafe in Higashi-kitazawa (one station closer to Shinjuku than the East Village style township of Shimokitazawa). It also sells a small selection of CDs and books, related to European prog. rock, modern compostion and improvised music. There are a few other customers. MS and TA enter and sit down at a table next to the south wall of the room. The waitress hands them a menu and waits for the order.

TA: [In Japanese] Could I get some tea please?
MS: I'll have a beer thanks.

TA: So do you have any questions or...
MS: Um, I wrote a few things down. Do you think I should record it?
I've got my portable recorder here.

Their drinks come and the interview starts

MS: Okay, I have a kind of dumb question. Why did you choose to spell your name with a "tuzi" instead of "tsuji", which is the more accurate pronunciation? It seems like anyone who doesn't speak Japanese is probably going to say your name wrong.
TA: Um, well, you probably know that there are a few different ways to write Japanese in Roman characters.
The spelling I use for my name comes from the Nihon-shiki system, which I think is the most logical. You're probably used to the Hepburn system...
MS: Yes. 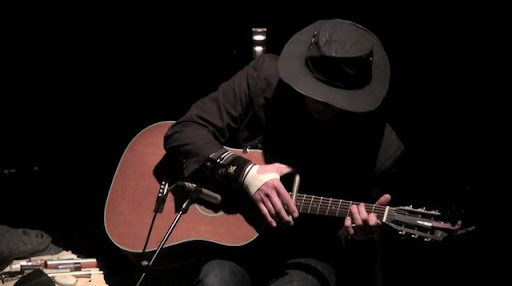 TA: [Writing down the Nihon-shiki romanized Japanese syllables in MS' notebook] You can see that it's very logical. One example of why is when you consider Natsume Soseki's famous novel "Botchan" [as written in the Hepburn system].
Why is it written with a "t" instead of an extra "c"? It's not logical, since there is nothing in Japanese that corresponds to the "tc". In Nihon-shiki, you would write "Bottyan", and you can understand which Japanese characters it comes from.

MS: So you write your name in the most logical way, not in the way that is easiest to pronounce.
TA: Well, remember that romaji is Japanese. It's not English, even though we're using roman letters.

MS: I guess so! Okay, another kind of strange question. Why are you known as "Captain" in Tokyo?
TA: You'll have to ask [Taku] Sugimoto.

MS: He made up the name?
TA: Well, I think he started using it. I don't really know why!

MS: Okay, maybe it's a good time to move on to music. I wanted to know: when I first started listening to your music, it seemed like you played a lot of prepared guitar. Like in Resophonie [2003 release on A Bruit Secret].
But lately, when I see you play, it seems that you mainly use just an unprepared acoustic guitar. Was this a conscious decision to change your style?
TA: Well, I guess I just didn't feel that there was anything "new" about preparation anymore. And at some point, even the problem of damaging the guitar while playing [as a prepared instrument]  became a concern for me.Also, the use of an acoustic guitar was mainly due to the sound restrictions at Offsite

Offsite was a celebrated, but tiny venue for improvised music in a residential part of Yoyogi in Tokyo. It closed down in 2005.

But I think I mostly just like the challenge of playing a normal guitar, a regular tuned guitar.

MS: Fair enough! Your playing is still very atonal to me, even if your
guitar is in regular tuning. I was wondering
about that too. Is it your choice to play atonally?
TA: I'm what's the word...[Tetuzi searches for an English word to describe his feeling].
I'm ambivalent, maybe, about atonal and tonal. It's very easy to play atonally on a strangely tuned guitar, but quite challenging on a normal guitar. When I play, it doesn't sound like a normally tuned guitar in some way.

MS: Sometimes I'm amazed that you manage to play for minutes without ever hitting two notes that sound "right"! That's really hard!
TA: It's not just atonal playing though. I mix in tonal playing on purpose. For me it's not two sides of a coin, it's more like one side of a Mobius strip. 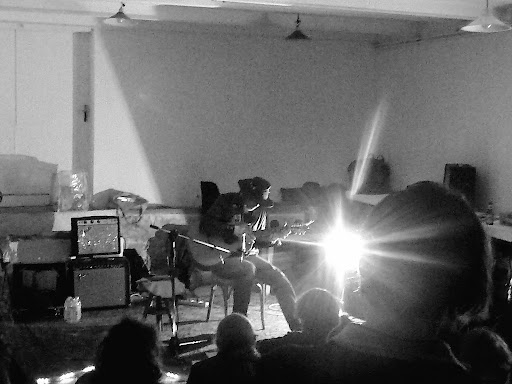 MS: What about your use of a capo? I've noticed that moving the capo's position really seems to structure your performances.
TA: Yes. But it changes the resonance of the guitar as well. It's not just the key, there are harmonics and overtones which change when you move the capo. To me, it sometimes sounds as if there are more than six strings on the guitar, because of the overtone changes.

MS: One more thing about your acoustic guitar playing. I wanted to know if string buzzing and those sort of sounds are intentional in your playing.
TA: Sometimes intentional, sometimes not. The important thing is to contain all the elements that occur during the performance.

MS: Okay. Lately, when I see you or other Tokyo improvisers play live, I'm aware that a lot of the elements of the performance seem to be composed rather than improvised. Is that true for your solo performances too?
TA: I'm ambivalent, again, about composition and improvisation. I have been composing small guitar pieces lately and I sometimes use them in concerts.

MS: I've noticed one melody a few times I've seen you play.
TA: Sometimes the capo movement is composed too. Sometimes I want the performance to be a story, even like a mythical story. Sometimes, I just want it to be broken and random and cut up into fragments. 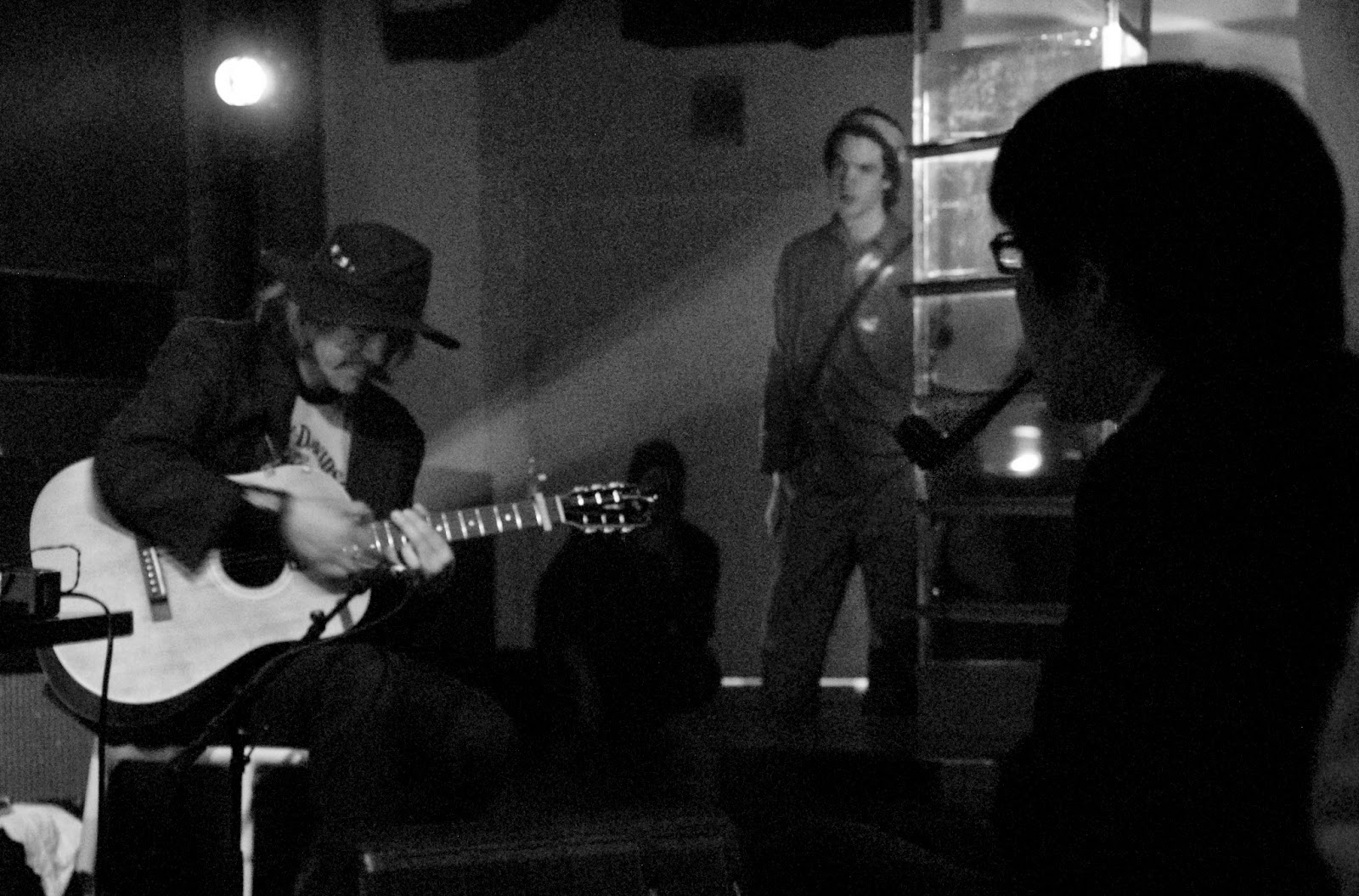 MS: Regarding improvisation, and especially the difficult type of improvisation played in Tokyo, where there may be a lot of space and it may seem quite hard for the audience to listen to, I have a theory I want to pose to you.
Do you think that the personality of a musician playing difficult music is important? I'm asking you because you have been described by one reviewer as having "considerable personal charm". I think your charm makes it easier for audience members to persevere, even when you're playing difficult music. If the person playing the music is some kind of asshole, in rock music it doesn't really matter, because you can just ignore it and have a good time. But with this difficult improvised music, I think it helps if the audience know that the performer has some "personal charm". What do you think?
TA: Well, no I don't agree. I don't think that the personality of the performer is important. In our small community in Tokyo, there isn't much difference between the audience and the players anyway, so I don't think it's a question of the listener versus the performer. Maybe it's more a question of how much the audience knows about the performer's music. With the internet lately, there is a lot more information available [about performers] which I think helps.

MS: Okay. Moving in a different direction now, you spend a lot of time outside of Japan playing music each year
TA: Four months last year [2008].
MS: Woah. Exactly. It's a long time to be travelling. Does it affect your music?
TA: Well, when I'm in Japan, I find that I devote myself to communication - email, etc, and there isn't
much time to play apart from at concerts. On tour, there is a lot of spare time by myself when I can play guitar. Sometimes I play guitar just to kill time. Also, I like the sound of different hotel rooms. There's also time to finish compositions. In Japan, we have this phrase "kanzume" [kandume in nihon-shiki romanization] where a publishing company might lock away a writer in a hotel room until he finishes writing his book. That's kind of how I feel in a hotel!

The drinks are finished and the waitress comes to clear away the empty cups.

TA: What shall we do, is that enough?
MS: Yeah, actually, we can stop there if you like.
TA: Okay. We can walk to Shimo-kitazawa if you want, actually.
MS: Really? From here? you know the way? 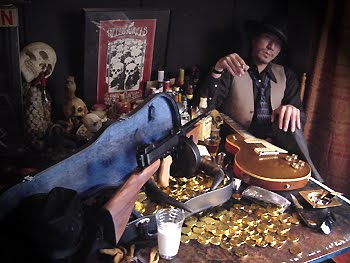 TA: So, how's Koenji?
MS: It's good thanks. Still finding new places every now and then that I haven't been to before.
TA: There's an improv bar near to Enban actually. Do you know it?

MS: No.I should check it out. So you like living on the Odakyu line?
TA: Yeah... you know this "Chuo-sen bunka"? It means like, the culture associated with the Chuo-line [the "central" line in Tokyo which includes Koenji station]. In the 60's a lot of hippies moved to places like Kokubunji on the Chuo-line, and that culture sort of remains.

MS: Koenji is a bit hippyish. Well, for Japan it is.
TA: I have sympathy for this culture, but I don't feel like I'm a part of it. Also, living on the Odakyu line, it's close to Shimo-kitazawa which is convenient.

They arrive at Shimokitazawa station

MS: Okay, thanks Tetuzi. I'll let you know when it's written up.
TA: Okay, take care getting home.

I thought I'd post an interview with Tetuzi Akiyama from the fanzine/art rag "haki-sou" (~="gonna spew") which Anthony Guerra and I just finished making last weekend. There are only 50 copies cos it's a pain in the arse to make, so by posting the interview here I thought it might reach more people. The format is done like a play, not cos I'm some pretentious wannabe English major, but because I didn't use a tape recorder, and I couldn't think of any other way to display it like an interview while emphasizing that they aren't verbatim quotations.