In My Opinion: Freddie Green

This is one of a series of taped interviews with musicians who are asked to give a snap opinion on a set of records played to them. Although no previous information is given as to what they are going to hear, they are, during the actual playing, handed the appropriate record sleeve. Thus in no way is their judgment influenced by being unaware of what they are hearing. As far as possible the records played to them are currently available items procurable from any record shop.

Little introduction is needed for the greatest rhythm guitar player in jazz. Frederick William Green was born in Charleston in 1911, and still travels back to South Carolina from time to time to visit his friends and relations. He joined the Count Basie Orchestra in March 1937 and has been with the band ever since. There is no doubt that a great deal of the band's success, rhythmically at any rate, stems from Mr. Green. As Count Basie said when talking about his guitarist, "When the chips are down I know just where he is. There's something real different between Freddie and me...he's my boss, in a manner of speaking". - Sinclair Traill

"Oh that was a beautiful band! They had such a lovely sound. I heard them before I joined Basie, when I was playing at a place called the Black Cat in the Village. It was a kind of jam band. We used to play through until six or seven in the morning. All kinds of people would drift in and climb up on the stand and jam with us. Harry James, who now has a really great band - he was playing like Pops in those days - and Benny Goodman, of course, was often in. Matter of fact, it was when he was with John Hammond one night that John heard me play and went and told Basie about me. That was the start with Basie and me.

"And some of the Lunceford band used to come in - Jimmie Crawford, Moses Allen, and, I expect, Al Norris, who was a real fine guitarist, both rhythm and solo. Jimmie Crawford was the greatest drummer for that band, and didn't the chorus girls go for him! No, I mean Jimmie used to play the show stuff so well that they loved to work with him. The rest of the group at the Black Cat with me were "Klook" (Kenny Clarke) on drums, his brother Frank Clarke played bass, Fats Atkinson on piano, Lonnie Simmons, who came up with me from Charleston, on tenor sax, and Bobby Moore on trumpet - he and I both joined Basie in Pittsburgh the same day."

"Well, he was the greatest I ever heard. It was something different; it was something novel. I first heard Charlie when he came to New York with Goodman - we used to room together in the same hotel on 25th and 7th Avenue. Everything he played was so pleasing, there was no effort, though a great deal of it was very dexterous - those chords and things weren't easy. I remember once he played a benefit show in New York with Goodman and some other bands who were on the bill. And directly there was a break, Charlie and I got ourselves downstairs to make some music, just rhythm guitar. He played wonderful rhythm you know; nobody better, except perhaps John Trueheart, who was the first real rhythm guitarist I ever heard. Of course, he came before Charlie Christian. He was with Chick Webb, and was one of the finest in the world. I used to go down to Harlem to hear Chick Webb and I would be there just watching John Trueheart. He played unamplified guitar and I liked the way he played his chords. He stuck strictly to the tempo and got a most wonderful sound from his guitar. He paid great attention to the tempo and rhythm from start to finish.

"And when you play rhythm guitar that is as it should be - you must pay strict attention, not look around and smile; there ain't no time for smiling at the girls. For if you pay real attention from start to finish, you haven't any time for anything but thinking about that tempo. You know, tempos sometimes have a tendency to vary according to the different phrasing of the various sections of the band. Some sections kind of lag back in fast passages and others kind of get ahead, but if you're playing proper rhythm guitar you have to correct that, all the way, from start to finish. And I used to watch John and he was the first guitarist I ever saw pay proper attention to tempo. There ain't no time for smiling when playing with Basie.

"It was terrible that Charlie died so young - the two great rhythm men, Charlie and Jimmy Blanton, both taken in their twenties. These are two names that are always brought up when you get to talking about rhythm musicians, Christian and Blanton. Both were way ahead of their time."


"Waltzin' The Blues"
Benny Carter and His Orchestra
Decca LK 4221

"Well that must be the first jazz waltz - 1936. I didn't realize Benny was over here then. The band sounds good. Nice guitar by Bernard Addison. I used to catch him at the Lafayette Theater years ago. He played with so many bands, including Fletcher Henderson and Luis Russell. I don't rightly remember who he was with when I heard him. But he was a great rhythm player. I don't know what has happened to him. I haven't seen him in years. You ought to play that to Marshall Royal sometime. That solo by Benny sounds just like Marshall - really does sound like him! And Benny also plays trumpet there. Funny, it sounds just like Benny Carter, if you get my meaning. [Carter's primary instrument was alto sax.] He is so very talented. Those things he writes - so melodic, so tasteful. They are just little things, but they have that quality, a fine melodic quality all their own. Those things he did for Basie recently, they are my favorite things in the book."

"I met Al Casey just the other day - before we left the States. I bumped into him on the subway and he was telling me about this album. He said he was pleased with it, but I hadn't realized it was as good as this. I wouldn't have thought there was a public for a guitar record such as this, because it's all amplified guitar these days. I remember I caught Al in a small club up in Montreal one time. He was somewhat dispirited, as he didn't think there was a place for his music any longer - he thought he was outdated with all these modern guitarists. But it is a pity that so many guys are like that and don't realize they still have a place. They don't realize that there is still a place for them, which they should do when they play as beautifully as this.

"Al was all shaken up about those electric guitars and all that competition. Yet he can turn out an album like that. Good! There aren't many of those kinds of guitar players left these days. Before I saw the sleeve, just at the beginning of that record, I thought for a moment it was Teddy Bunn - sounded like him. I last saw Teddy out on the Coast, but we were so busy I didn't get a chance to get along and hear him. A pity, for I love his style of playing; he gets a fine beat going. You know, he infects people with those blues, like Jimmy Rushing does. And you know Rush breaks it up, even now, every time he plays with the band. Doggone it, with any band! Doesn't matter what they are playing or how much the crowd are enjoying the show, let Rush step up and man, he just breaks it up."

"I was never lucky enough to catch him in the flesh, though I have listened to many of his records. I know the first time I heard a Django record it knocked me out - it was quite a different approach. No question of who it was, you can recognize him at once. I like his rhythm guitar playing, as well as his solo work - he really cuts through, the style is all his own, and he played with an enormous amount of feeling. I have always regretted that I was never able to see him, and learn just how he operated without the use of those two fingers. He was really so outstanding that he can't be overlooked. He mixed his playing, sometime so very pretty with those lovely runs, and then back to jazz. He had a lot of feeling for his music and was lucky enough to be able to make that feeling come out. Some people can do that, and it's good. You feel something and that is the way you play it - it's a natural thing. Django was full of feeling. Incidentally, that was a lovely little tune they played there - I've heard it somewhere before, I think."

"I saw Herb just recently, when he came from the Coast to make some records in New York. I also heard him backing Ella, and man he was terrific, I'm telling you. He's such a nice guy and a wonderful player. He's always willing to pass on anything he knows, and that's a lot, to anyone who is interested. He's a real guitar man, and another with feeling. Pity he can't pass that on - you can't pass on feeling. You can say 'now I feel happy' or 'now I feel sad', but you can't make the other fellow feel it."

"That was an individual sound. I am not too well acquainted with Lang's work, but it sounds as if I should be. I haven't had much chance to hear records, traveling around as we do. There are a lot of the older musicians I would like to study. Lonnie Johnson, for instance - I heard him once and he was great. And who was it played a twelve string guitar? Leadbelly? 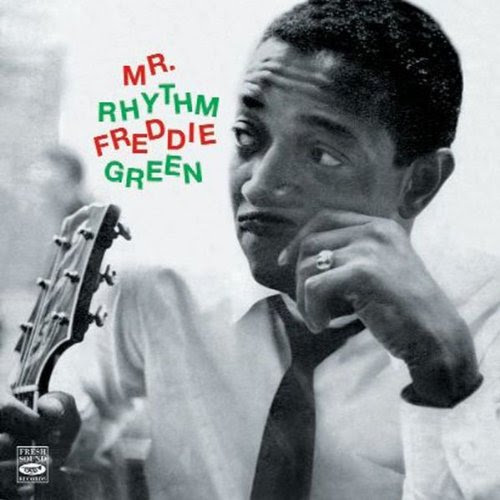 "But that was a good record. Good musicians there, all of them. The sound is just great, with real solid rhythm. Isn't Charlie Teagarden good? I never knew he was as good as that. But it is a good sound altogether.

"Pity you didn't play me a record by Wes Montgomery - he knocks me out! He doesn't use a pick you know - it's all played with his thumb - and all those runs he makes, really fast. There again he is new...has something fresh, a new approach, like Charlie Christian had in his day."