How Did I Become A Living Legend by Jimmy Raney

A few days ago I began to wonder how I had become a Living Legend. It has happened in the last few years. Before that I was an Old Master. I’m not sure what a Living Legend is. I’ve also become an Elder Statesman. I don’t know what that is either. I don’t do much anymore, so I think about these things. That last sentence is a good example of what a Living Legend does.
When I first became an Old Master, it worried me. I knew it meant the end was in sight, but I didn’t know what to do about it. I know who’s behind it though; it’s the Jazz Critics.

I picture a secret meeting of Jazz Critics International held in upstate New York, where the Mafia had their ill-fated session. It’s getting near lunchtime and most of the important things, such as what the new trends are and what Ira Gitler says they mean for jazz, have been taken care of. Then someone says:
“What are we to do about the old players?”
“Like who?”
“Well…like Jimmy Raney, for instance.”
“Who?”

“Raney. Raney. Don’t you young guys ever listen to anything but Fusion?
“Oh yeah, now I remember. He played with Bix Beiderbecke.”
“No. No. No. That was Eddie Condon–way back in the twenties. Raney came up in the Fifties; he played with Stan Getz or somebody. You’re going to have to do some homework or you’re in serious trouble. You can’t get away with doing all your writing with old Leonard Feather articles, a pair of scissors, and a pot of glue.”

“Why do we have to do anything?”, somebody says, “I hear he’s dead anyway.”
“He’s not dead, he’s deaf. That was a typo.”
“Well, then he doesn’t play anymore, so what’s the problem?”
“No, he still plays once in a while. He played at Bradley’s and Zinno’s a couple of years ago and Ira didn’t cover it, so I don’t know what to say. He seemed to be doing the same sort of thing, but I’m not sure. I finally had to fall back on that old saw about ‘crystal clear logical lines stretching to infinity.’ You know the one; you’ve all used it. Geez, we can’t keep doing stuff like that. People are beginning to catch on.”

“Hey guys, a fellow pipes up, “Have you seen the new Aftran software? I mean it’s really great. It doesn’t just give you synonyms; it’s really creative. I fed in ‘crystal clear, deft and logical lines,’ and I got ‘taut, luminous, and penetrating structures.'”
“Listen Tony, I thought we agreed to take up the new technical equipment after lunch. O.K.–we’re all getting tired and hungry. Let’s get this over with. Does anybody have any ideas?”
“I think I’ve got it!” someone in the back says, “It’s right here on page 23 of Braintree’s new book ‘Jazz and Jazz Criticism.’ It says, ‘When you have to review an older musician who hasn’t done much lately, you call him an ‘Elder Statesman’ or a ‘Living Legend’. 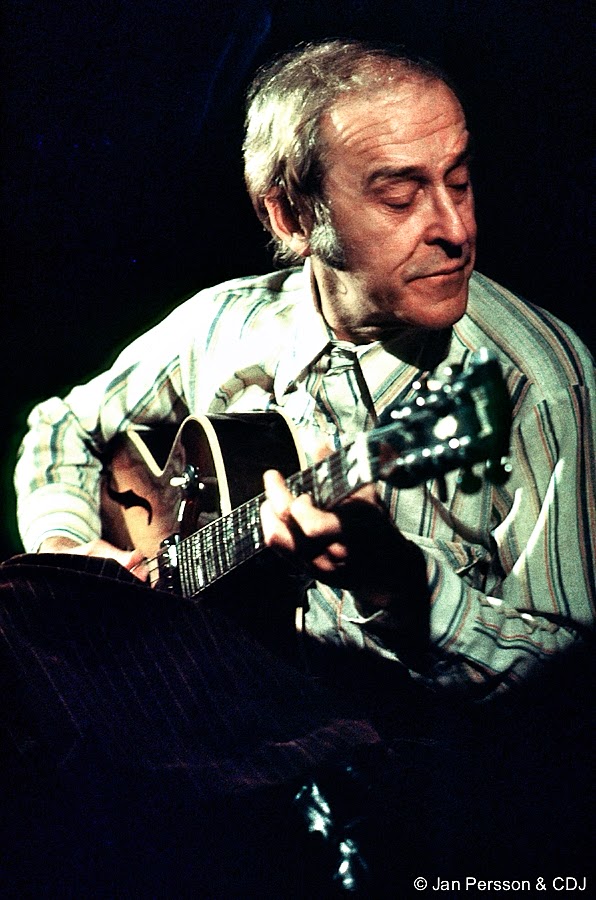 It makes further comments unnecessary. It’s a truism. don’t you get it? Now the ball’s in the reader’s court. He feels like a dumbbell because he’s never heard of him. It’s a master stroke. You know, “The elder statesman played in his usual deft, creative, and sure-footed manner.’ You can write your piece in five minutes flat, and still have time for the Rangers’ game on TV.” There is a general round of agreement and idle chatter.
Here, I think, is a good place to tiptoe off and leave them.

I was still stuck with what Elder Statesman and Living Legend meant. Then I found it in a book about George F. Kaufman. Elder Statesman (or Living Legend) means:
“Forgotten, but not gone.”
This little piece of irony was written in Louisville in the late 1980’s (probably 1988 or 1989) during a period when not much was going on and Dad’s ear was not in good shape at all. He wrote music without an instrument and penned funny little stories like this one to fill that creative gap. The Zinno’s gig referred to was in 1987. It was with Jack Wilkins and was much talked about among musicians and fans. Most of the Bradley’s gigs were with Attila Zoller and they occurred during the period from 1979 when Dad lived in Manhattan and on thru 1987 or so. I remember reading a few very laudatory blurbs about the gigs and one pre-gig announcement from a critic in the NY Times who mentioned that if you “hadn’t heard Jimmy Raney live you were really missing something special”. (And it wasn’t Ira Gitler)

In 1946 he worked for a time as guitarist with the Max Miller Quartet at Elmer's in Chicago, his first paying gig. Raney also worked in the Artie Shaw Orchestra and collaborated with Woody Herman for nine months in 1948. He also collaborated and recorded with Buddy DeFranco, Al Haig and later on with Bob Brookmeyer. In 1967 professional difficulties led him to leave New York City and return to his native Louisville. He resurfaced in the 1970s and also did work with his son Doug, who is also a guitarist.

Raney suffered for thirty years from Ménière's disease, a degenerative condition that eventually led to near complete deafness in both ears, although this did not stop him from playing. He died of heart failure in Louisville on May 10, 1995, just short of his 68th birthday. His obituary in the New York Times called him "one of the most gifted and influential postwar jazz guitarists in the world".