Interview with Robert Fripp 1974 plus a Robin Trower Tribute 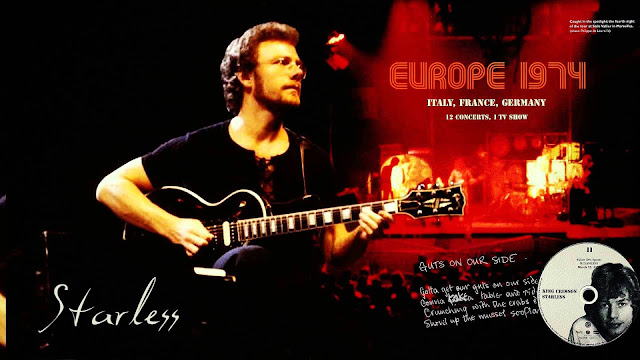 FRIPP: AFTER KING CRIMSON, THE APOCALYPSE

NEW YORK--- After five short years King Crimson is no more and the man who began and ended the group, Robert Fripp, is already putting those years behind him and looking ahead---enthusiastically---to composing the soundtrack for the end of the world.

Fripp envisions "a decade of considerable panic in the 1990s--collapse on a colossal scale. The wind-down has already started," he said with relish. "It's no doomy thing -- for the new world to flourish the old has to die. But the depression era of the Thirties will look like a Sunday outing compared to this apocalypse. I shall be blowing a bugle loudly from the sidelines."

He will survive, he said, by turning himself into a "small, self-sufficient, mobile, intelligent unit." His first transforming step, after dissolving King Crimson, has been an album recorded with Brian Eno, formerly of Roxy Music, creator of his own LP, Here Come the Warm Jets and one of the wacky brains behind the Portsmouth Sinfonia. It's available only on Island Records in England since Atlantic, Crimson's American label, turned the venture down and will release a final live Crimson LP instead.

Fripp was in New York to mix that album and spoke of his disappointment that Atlantic nixed his experiment with Eno: "No Pussyfooting was Top 30 in England," said the bearded guitarist and Mellotron specialist. "It sold 28,000 copies which is a little more than respectable for that market. I put it alongside the first King Crimson album."

Side one of No Pussyfooting, "The Heavenly Music Corporation," is Fripp's contribution to the British economy drive, since it cost an estimated $12 to produce. "It's literally homemade," he said. "We did it at Eno Mansions in London. Captain Eno invited me over for the evening and it ended with us plugging our guitars into our Revoxes, with no amplification, emerging some 45 minutes later with side one of the album."

Side two, "Swastika Girls," was more formally produced. The recording cost was $375, he said, and mixing accounted for another $500. "We released it on a budget line in England, to pass this economy of production on to the consumer. Eno and I will also do a couple of concerts in London--work wherever we are wanted."

Fripp will also collaborate with Robin Trower on an album. "He's a little hairier and a little closer to rock than I like to operate but we have found a rapport," he said.

"A lot of rockers I find aggressive and uptight but Robin has spirit, from the heart, and a measure of control. The rock & roll business is constructed on wholly false values, impermanent and mainly pernicious, although not in an obvious way, so it is fine to find a musician not really affected by it."

He did not consult with anyone before breaking up the band, he said, although he did make sure his roadies and musicians could find other employment. Drummer Bill Bruford was "very disappointed," he said, while bassist John Wetton was "straightforward, very friendly, no bad vibes."

Fripp made himself a good living from Crimson, he said, and has enough money to pay his bills for three years.

If he is not sounding taps for apocalypse in the near future, Fripp wants to try his hand at teaching. "I'm interested in creating a new kind of guitar technique that is really working on three levels of being: heart, hands, and head. A way of life. More akin to yoga than formal guitar technique, actually an approach to living. When you listen to Casals, Mehunin or even Ravi Shankar, their music is considerably more than notes on a piece of paper, but most rock musicians are hopelessly inadequate, rooted to the earth. Most rock guitarists are thrashing around onstage using a very low-grade energy and this energy comes from a very nasty quarter. Rock & roll is not very intellectual and neither is it spiritual."

Tribute to Robin from Robert Fripp, 1996,
as appears on the liner notes to the BGO 2-on-one reissues of Robin's early solo albums.

Robin Trower is one of the very few English guitarists that have mastered bends and wobbles. Not only has he got inside them, with an instinctive knowing of their affective power, but they went to live inside his hands. It is the rare English guitarist who has been able to stand alongside American guitarists and play with an equal authority to someone grounded in a fundamentally American tradition.

Trower has been widely criticised for his influences. This has never bothered me. I toured America in 1974 with Ten Years After top of the bill, King Crimson second, and Robin Trower bottom. The chart positions were the opposite: TYA in the Billboard 160s, Crimson in the 60s and Trower climbing remorselessly through the top twenty. Nearly every night I went out to listen to him. This was a man who hung himself on the details: the quality of sound, nuances of each inflection and tearing bend, and abandonment to the feel of the moment. He saved my life.
Later, in England, he gave me guitar lessons.