Fernando Farinha, the Kid from Bica 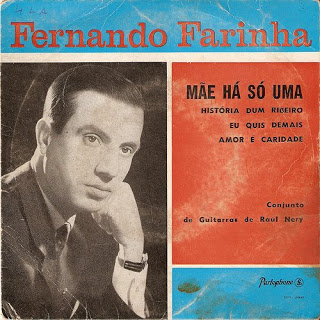 
Fado critic Daniel Gouveia once summed up the enormous popularity of Fernando Farinha in these words: “Even today, if we were to ask fado aficionados who the all-time best fadista is, many would not hesitate: Farinha!” (1). Indeed, Farinha’s powerful, high-pitched voice, graced with an incomparable depth and richness, is synonymous with high-quality fado. He was never too dramatic on stage, much preferring to stand rigidly gazing into the horizon as he performed. But when Farinha sang, the audience was mesmerized by his very personal singing style, which was always unmistakably his own. His long career spanned four decades, during which he gained great success on radio, records, television, and even movies, becoming one of the most respected fadistas in the history of the genre.


Born in Barreiro in 1928, Farinha moved to Lisbon’s Bairro da Bica with his parents when he was five, and there he stayed the rest of his life. Even when he achieved fame and fortune as a singer, he still chose to make that legendary neighborhood his home. Farinha was an easy-going, down-to-earth man, always proud of his humble origins, which he celebrated in many of his self-referential fados. Among these, “A Minha Apresentação” (“My Introduction”), a sort of musical calling card (2), is one of the most telling:

If by chance you might
Want to know where my house is
Ask any neighbor
Where Farinha lives
And she will reply, “Over at Bica!”


When he was only seven, Farinha showed off his singing abilities at a fado contest. Not only did he take the prize that night, but he also acquired the nickname “the Kid from Bica,” which would remain associated with him for the rest of his professional career, a fact that was celebrated in some of his song lyrics. He cut his first records in 1940, and very soon he began appearing on the revue stage with the likes of Hermínia Silva and singing at the most renowned fado houses in Lisbon, namely at the Adega Mesquita, where he appeared throughout the 1950s. 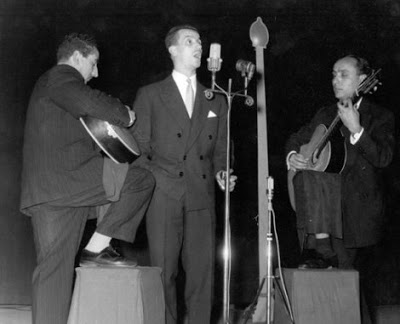 Farinha also became a regular on radio and television, and his popularity secured him live gigs not only in Portugal but also abroad. Many were the awards that he received over the years, but one of the most important came in 1962, when he was named King of Portuguese Radio. Farinha was one of the few fadistas to earn this prize, which was usually awarded to more pop-sounding artists, and this is ample proof of the wide appeal of his singing style.

In the 1960s, Farinha starred in a movie entitled O Miúdo da Bica (The Kid from Bica). The plot was loosely based on his own life, and he played himself and performed several songs. Incidentally, its title is yet another example of Farinha’s pride in his nickname. Due to the success of this film, Farinha appeared in A Última Pega (The Last Magpie) opposite Vicente da Câmara, one of the great names of the so-called aristocratic fado. However, even though he proved to be an adept actor, his appearances on the silver screen are not necessarily among the highlights of his remarkable career.

The two movies in which he starred underscore a fact that is sometimes overlooked when considering the artistic legacy of Fernando Farinha. While we tend to think of him mainly as a performer, that well-known side of his artistry often overshadows the fact that he was also an outstanding songwriter with a sharp sensibility for poetry. All the songs that he sang on the soundtrack to both pictures were his own compositions. Farinha showed an interest in poetry early on, and he actually penned the lyrics (and occasionally the music) of some of his biggest hits, as well as producing hits for other artists such as Amália Rodrigues, Fernanda Maria, Alice Maria, and Carlos Macedo.

Some of his lyrics can be counted among the best-crafted and most powerfully poetic efforts in fado history. Thus, in the witty “Beijo Emprestado” (“Borrowed Kiss”), he urges his lover to return a kiss that he gave her in these terms: “Give me the warmth / Of that kiss that I loaned you / I want to see if your love / Is the same as the love I gave you.” And then he reminds her that “those who pay their debts / Are more satisfied / For after paying what you owe / You do not owe anything.” In “Maldição” (“Curse”), after parting with his lover, he regrets having first laid eyes on her:

But in “O Teu Olhar” (“Your Eyes”), Farinha undoubtedly achieves one of his lyrical heights by exploring a very similar theme and using visually powerful metaphors:

Other lyrics by Farinha delve deep into the typical fado themes of unrequited love, longing for the past, the suffering of immigrants, and fado tradition. The theme of tradition was clearly underscored in the course of a legendary 1962 recording session that brought Farinha together with one of the patriarchs of fado, Alfredo Marceneiro. That reunion produced one of the landmark records in fado history, “Antes e Depois” (“Before and After”), a desgarrada punctuated by the fine Portuguese guitar work of Raul Nery in which the Kid from Bica and the elder statesman combine tradition and modernity. 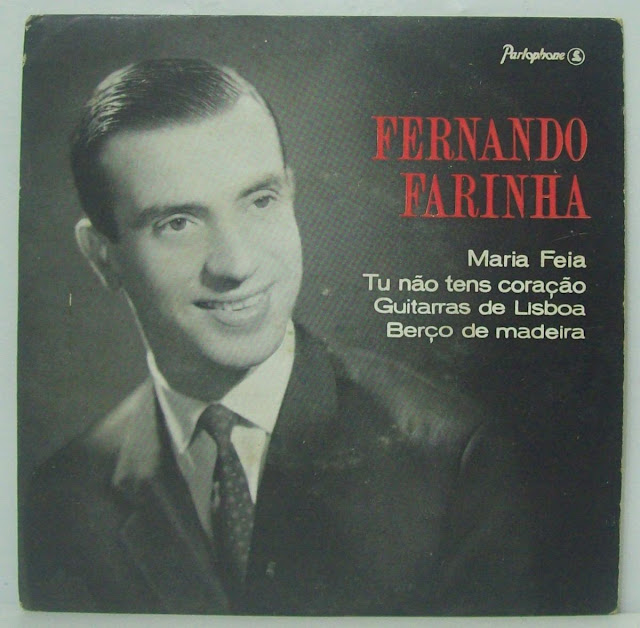 Fernando Farinha passed away in 1988, at age sixty and well before his time. In spite of his fabulous career and long-standing success, no official tribute was held to commemorate his passing. Fortunately, many of his recordings have been reissued and are now available on CD. Farinha was not merely a fado performer: rather, he was a multi-faceted artist that found success in many fields but that always remained true to the fado idiom. Fado was, in fact, the outlet for his many talents, which have secured him a privileged position in the history of Portuguese music at large. And as long as interest in fado exists, the name of Fernando Farinha will always be counted among the top performers of the genre.

(1) See the liner notes to the CD Biografias do Fado: Fernando Farinha (EMI-Valentim de Carvalho, 1998), page 6. (2) Gouveia (page 6) refers to this song as a cartão de visita (calling card) and attributes those words to Alfredo Marceneiro.