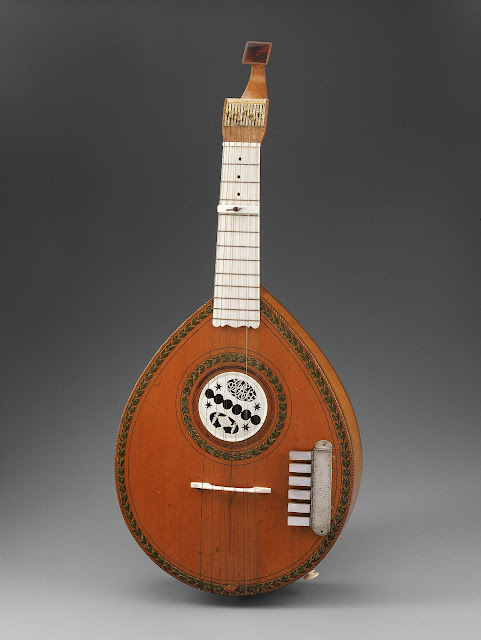 Two-piece back and ribs of maple. Belly of fine-grain spruce with painted purfling encircling soundhole. Back and belly edged with binding of dark brown wood. 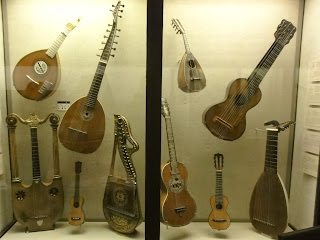 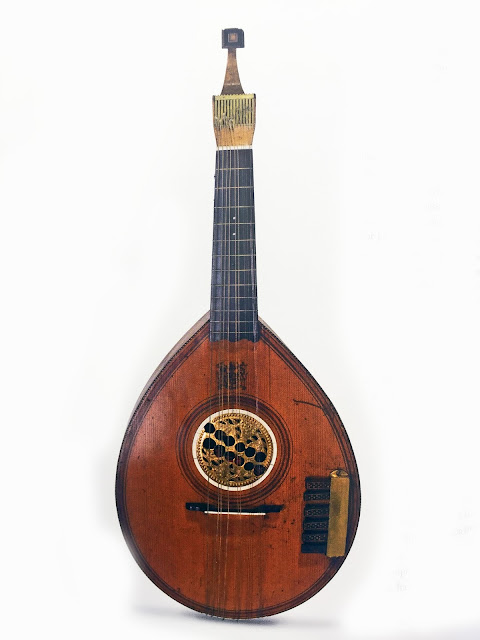 Stamped rose of brass with figures playing flute and hurdy gurdy, and retaining ring of ivory. Neck and sickle-shaped head of maple terminating in square finial veneered with wood and ivory. Watch-key tuning mechanism of brass. Fingerboard of ebony with three holes for capo and twelve frets of brass. Nut, saddle, and end button of ivory. Bridge of ebonized wood. Ten pins of brass at lower end of body for fastening strings. 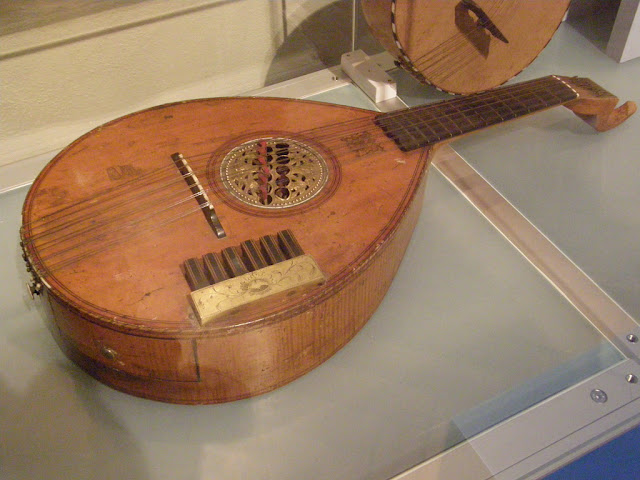 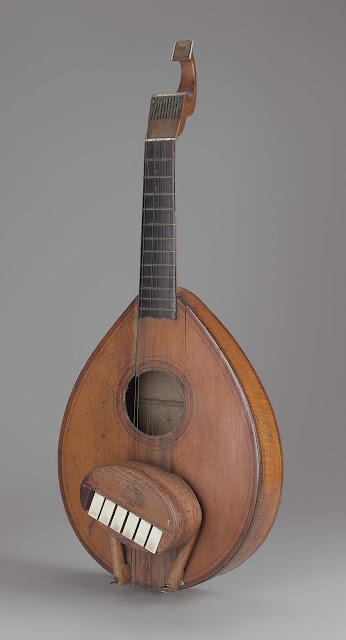 
Pear-shaped body with flat back. Back, ribs, and neck of slab-cut maple. Belly of spruce with slightly-domed ivory rose, carved and pierced with six-pointed stars, urn with swags, and monogram “A R L.” 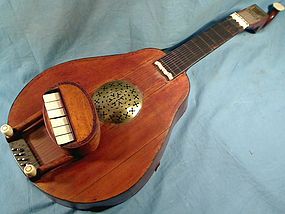 A Cittern with watch key tuners with an added Ivory "keyboard" which strikes down on two strings.

Black single-line stringing and painted green leaves encircling rose and perimeter of back and belly. Back and belly edged with barber-pole binding. 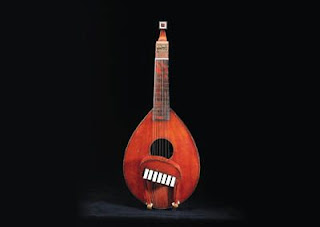 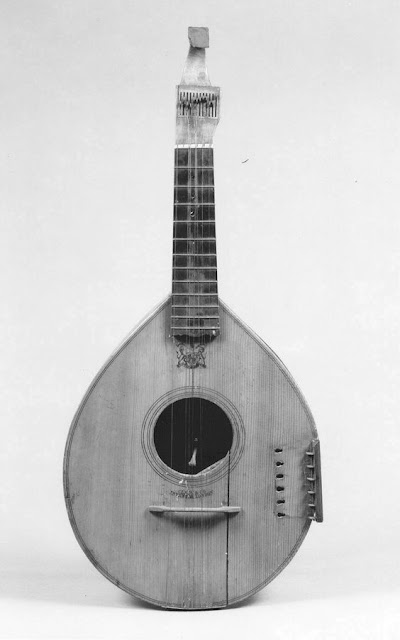 
The Keyed Guitar (English for: key guitar, Italian: chitarra a pianoforte) is a constructed instrument, probably Christian Clauss, that is equipped in addition to all the usual components of a guitar with a hammer structure below the strings. On the body itself also there are keys to control the hammers. 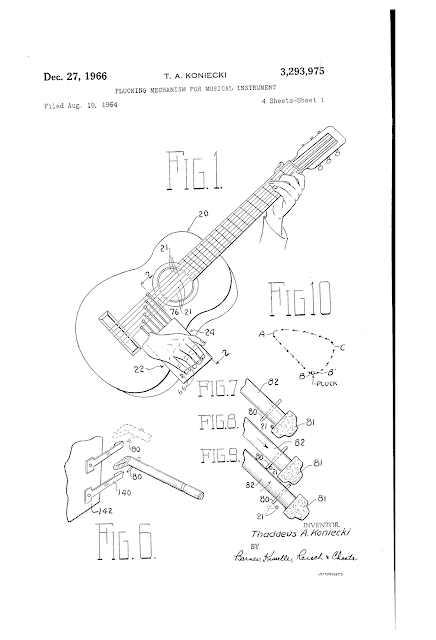 Tastenguitarre | Leipzig, Museum für Musikinstrumente der Universität, Inv.-Nr. 605 (Kriegsverlust)
Lit.: Kinsky 1912, 172f., 170 (Abb.)
There is an associated hammer and a key each string. Normally, that is, six hammers and keys are present. There are various constructions developed to transmit the key motion on the hammers. 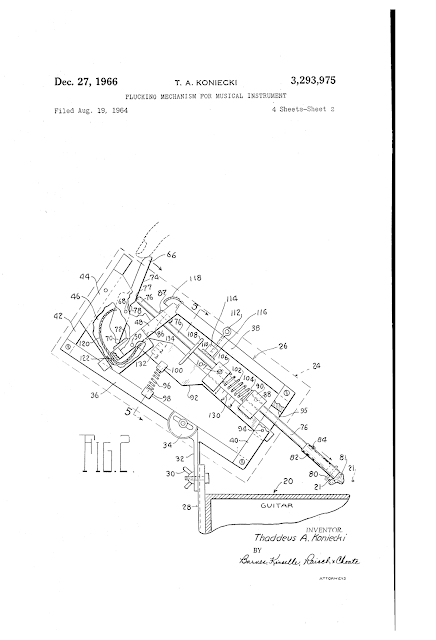 The simple straightforward method that abut strings is achieved by a tilting movement, which is triggered by the depression of the key, leading to an upward movement of the parallel juxtaposed hammers. This mechanism is characterized by its simple design and the unproblematic replacement associated the individual components. Moreover, such a key guitar is playable in any position and it's not affected by different attitudes of the instrumentalists. 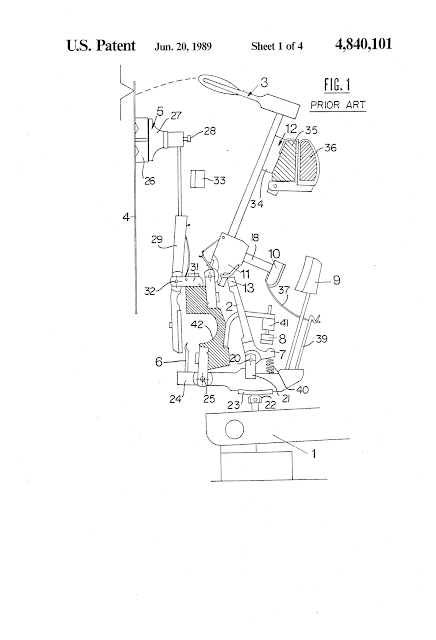 In a very complicated variant there are more bars associated with every string, offset by the key operation in rotation. Here, a cable is used and the hammer parts are floating. So, the guitar can not be recorded in any position.

There are both electric and acoustic guitars with hammer constructions. 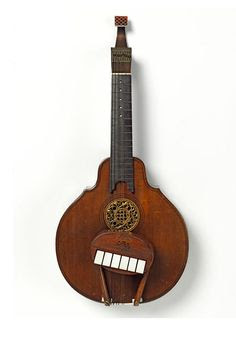 There were both internal and external devices. I must admit that I can not see the advantages of such an innovation except that it saved the player's fingernails from damage. Nonetheless these keyed guittars became immensely popular for some time, two music sellers got entangled in an more or less absurd legal dispute and no less than three patents were filed for different variants of this mechanism. 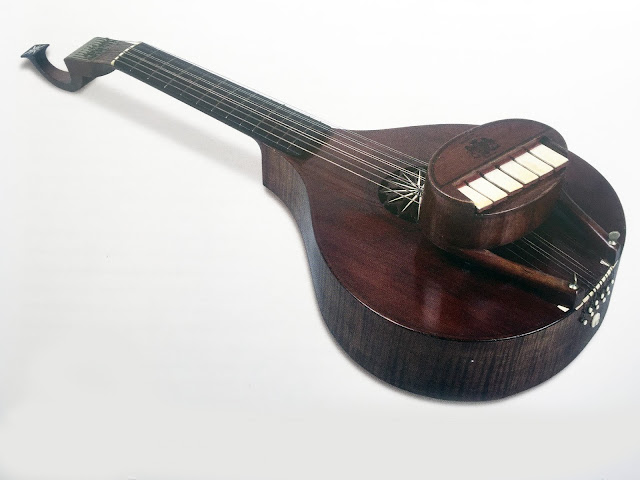 
His name suggests that he was a immigrant from Germany but it is not known to me when or why he came to London:

"Christian Clauss, the sole Inventor of that celebrated and admired Instrument, takes the liberty to acquaint the Nobility and Gentry, that after twenty years close application and practice, he has at length constructed the said instrument, in so happy a manner as to render it deserving and worthy the notice of the Public." 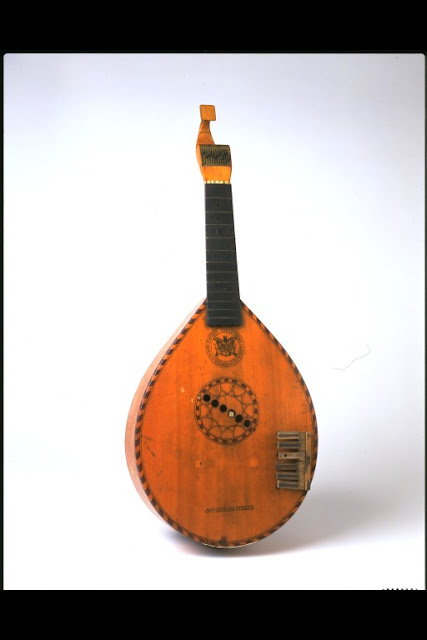 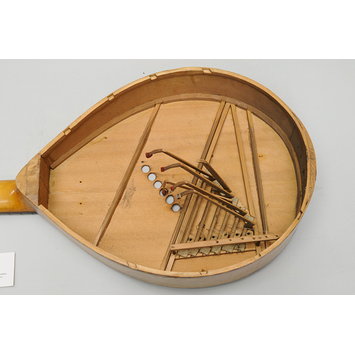 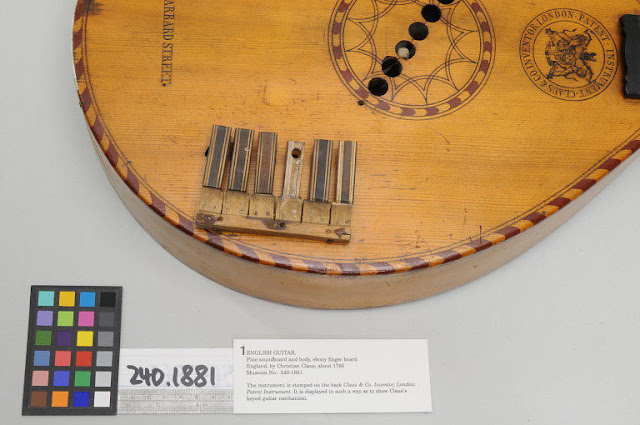 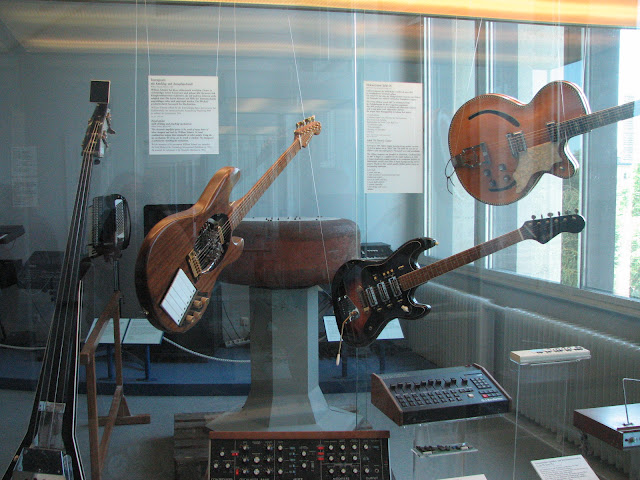 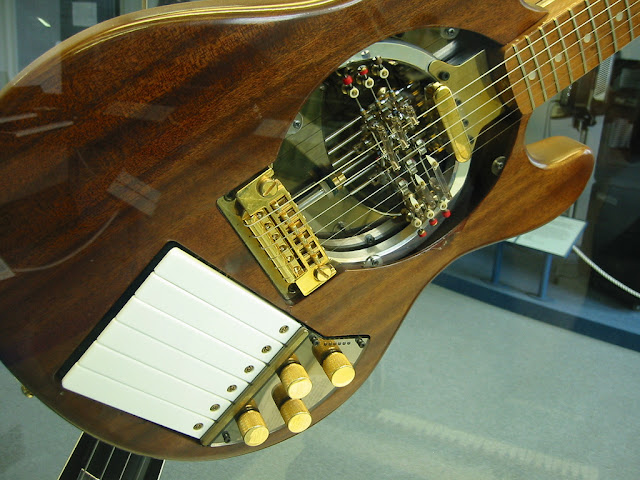 The german innovation is a key guitar whereby the striking and picking or plucking of the strings is not done by fingers or by the help of a single plectrum, but by keys. 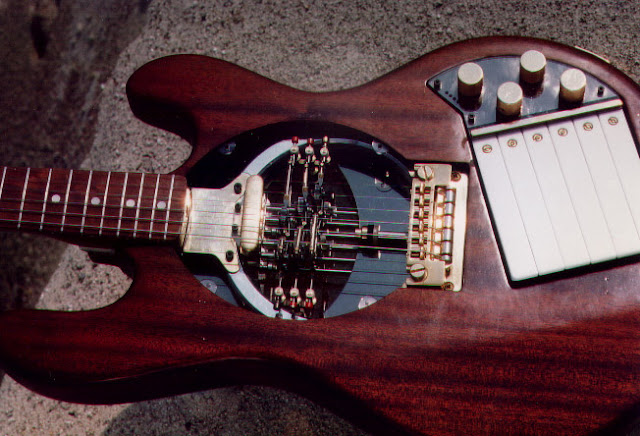 The keys are mounted in the body of the guitar beside the bridge. 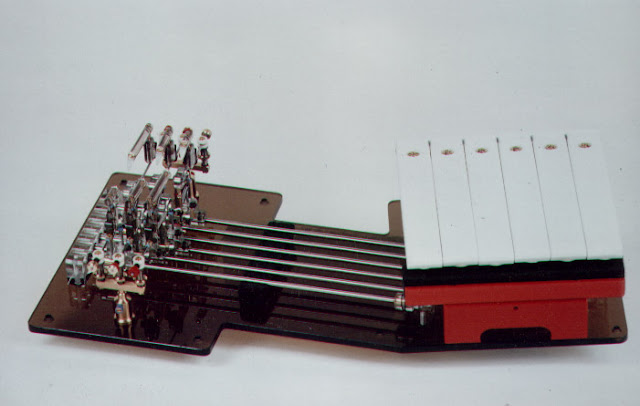 The keys mechanically operate removable hammers which either strike the strings or perform a picking or plucking movement. In a second version of the keys are operated electronically. 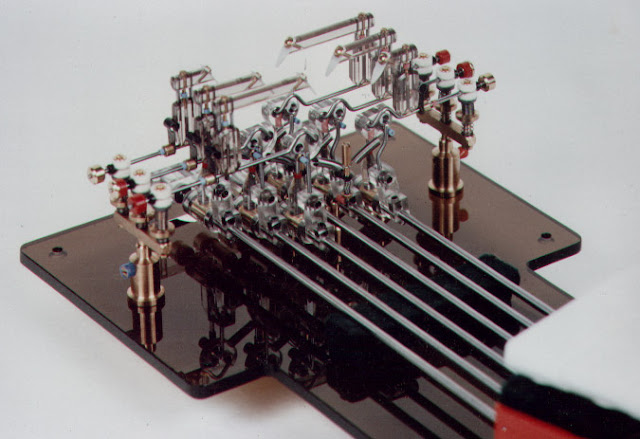 With this invention it is possible to learn even the most complicated techniques very quickly and to invent combinations which are not possible with a traditional guitar. It is therefor possible to play new rythmus and produce new sound effects. Steiner & Schmitz are looking for partners who are taking care for the production of the mechanical or electronic part. 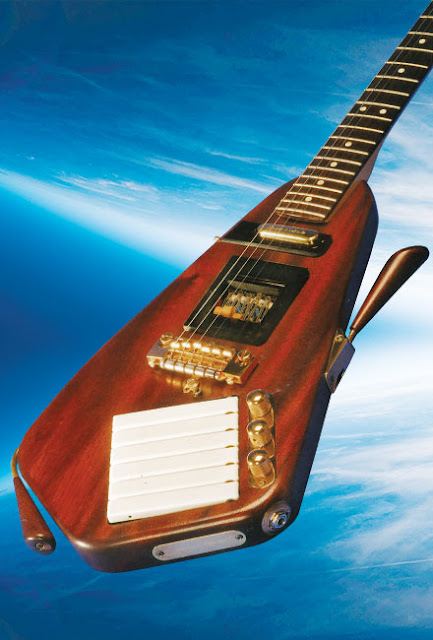