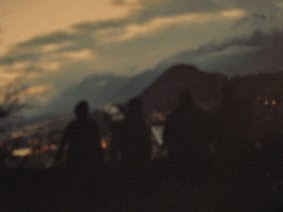 Download
We are used to hearing the most radical experimentation in the smallest of spaces, so it somces asa shock to encounter a bunch of premier league electroacoustic troublemakers in a building of epic scale. The Jesuit church in Sion, on the river Rhone in the Swiss Alps, certainly sounds bast on this live recording. The four musicians, like eagles, constructed nest in the organ loft and on nearby ledges, and proceeded to play for four hours. The results (from November 2001) have been telescoped to a portable 80 minutes to the wmo label, run by London based Basque musician Mattin.
Jerome Noetinger (MIMEO, Metamkine) and Lionel Marchetti have worked as a duo for the last 12 years. Bothe use electroaucoustic setups, in Marchetti's case involving speakers, mics and lashing of fresh feedback. David Chiesa is a bassist who has appeared in a trio with Tom Chant and Eddie Prevost. And organist  Jean-Luc Guionnet is a Xenakis student and member of Hubbub, with a solo organ album on A Bruit Secret.
Tangerine Dream this ain't, but the musicians are audibly enjoying the church's generous acoustic. Much patient, ominous exchange of drones and scary electronic malfunction noise is interpesed with electric stroms and howling saxophone, as a group let rip with dark exuberance. Guionnet's sax in particular dives from the rafters like a delirious harpy, and we all descend into an almighty, soul-shredding, sonic inferno, which I can imagine the Jesuits being pretty happy with. Elswhere there are longueurs where not much happens, possibly representing the Purgatory side of things. An audacious and at times utterly exhilarating release. By Clive Bell (The Wire)
Publicado por Miguel Copon en 7:59 AM