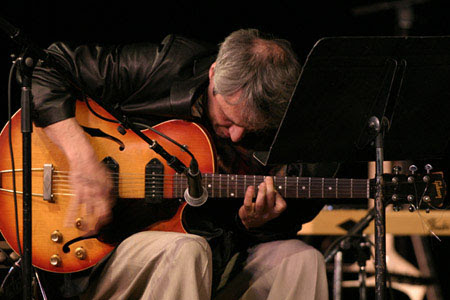 For this New Sounds, we’ll have at least a double-helping of guitar music, featuring some solo works by Marc Ribot intended as music for films: some are adaptations of music he has actually written for films, others for classic silent movies that he scored for his personal amusement, still others for films of his own imagination.  These haunting and wistful pieces explore, as Ribot says, "the strange area between language and spatiality that exists partly in between music and visual image, and partly as a common property of both."
Plus, solo guitar music from gifted guitarist/composer Gyan Riley (yep, son of notable composer Terry Riley) from his most recent effort, “Stream of Gratitude,” a record of original works that happen to be dedications (to J.S. Bach, John Dowland, Agustin Barrios Mangoré, Egberto Gismonti, and others.) All that, and music from William Tyler, Henry Kaiser, and Michael Chapman as well.