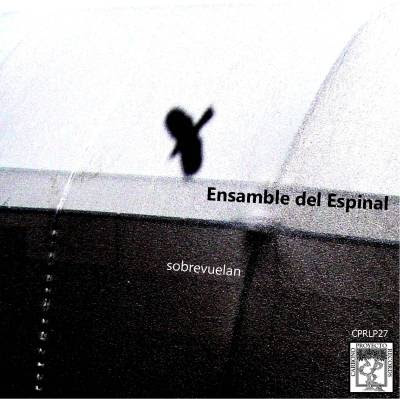 Sobrevuelan consists of three improvisations recorded on January 25, 2013 in La Casita de Carbono, Toay, La Pampa.
Ludmila Ayala: guitar
Fabián Racca: beans, synthesizer, violin, bass drum, voice
Mario Ayala: processed guitar, vocals
As I edited parts of this session I realized they were united by a common thread that could well be the pain of death, injustice, intolerance, oblivion, oppression … It was something that came without plan but that was latent, was waiting for that right moment improvisation to manifest itself.
Impotence flies over them because at this point in our human history inequalities and impositions intensify in a continuum of time that is becoming more sinister. Terrible crimes hidden behind a veil of modernism that numbs the senses, as protected by a remote control of the situation. In No más drones [No more drones] Mario talks about it to reflect on the naturalization of the term “drones” as known in experimental music and that at the same time is the name for unmanned planes that drop bombs over the Palestinian people.
In chirridos en la memoria  [squeaks in memory] the moans of a violin invoke the memory of the sound of the trains that were ripped from the lives of many people after a proyect of neoliberal submission and emptying an entire country and a region like Latin America. At one point the my father’s moved gesture appears before the incomplete and ghostly return of convoys passing just meters away from the family home in Realicó, and it was actually a vision from another time, forgotten. It’s just that these trains had given meaning to the existence of the towns in the middle of La Pampa and hundreds of places in the interior of our country. Moreover, the same railroads were the same symbol of progress but also of intolerance, since they worked as boundaries that divided the inhabitants of the same town and in many cases they still work that way. On the other side of the railroad there were the laborers, servants, the poors that had to cross it daily to go to their hard labor, the “negros de atrás de la vía” [niggers behind the railroad”] that had to be kept at bay.
These slums inhabited by descendants of native peoples, mestizos, criollos, where most widespread religions make their contribution to nourish such dependence, are the context of the sad story that is personified in Rosa, taken from an old folk tale in pampas. Although the original I heard emphasizes the “incorrigible” character of Indians even though religion wanted to “civilize” them, it is known that the different variants of Christianity have contributed for the descendants of native peoples to be integrated in terms of inequality into the imposed model of society. Thus, stigmatizing and making them responsible for their condition have been resources used ad nauseam to justify the unjustifiable. Rosa is a recording that I hesitated to include in this record because I found it conflictive to name a surname, although I am not referring to anyone who I may know beyond this story. Finally I decided to leave it just as it was to make a more clear sense of what the improvisation embodies, because the priest is not accusing just anyone but one of many names that survived the Conquest of desert [the biggest militar campaign against Indians in Argentina, that took place between 1878 and 1885] and are part of that culture still denied and misunderstood.
Sobrevuelan, then, by Ensamble del Espinal… (FR)