“Me, My Mother, My Father, and I” Ragnar Kjartansson 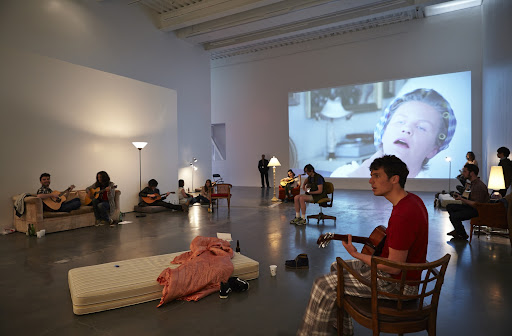 “Me, My Mother, My Father, and I” is the first New York museum exhibition of Icelandic artist Ragnar Kjartansson (b. 1976 Reykjavík, Iceland; lives and works in Reykjavík). Born into a family of actors and theater professionals, Kjartansson draws from a varied history of stage traditions, film, music, and literature. His performances, drawings, paintings, and video installations explore the boundary between reality and fiction as well as constructs of myth and identity.

He often attempts to convey genuine emotion through melodramatic gestures and conversely reveals sincerity within pretending. Playing with stereotypes usually projected onto the persona of the actor, Kjartansson both celebrates and derides the romanticized figure of the artist as cultural hero. His performances are often feats of endurance, which last for hours or days at a time, taking a motif as simple as a pop song and transforming it through protracted repetition into a transcendent mantra.

At the New Museum, Kjartansson presents works with and about his family, including a newly orchestrated performance and video piece entitled Take Me Here by the Dishwasher: Memorial for a Marriage (2011/2014), in which ten musicians play a live composition for the duration of the exhibition.

This work takes inspiration from a scene in Iceland’s first feature film, Morðsaga (1977), directed by Reynir Oddsson, in which the main character of the film, played by Kjartansson’s mother, Guðrún Ásmundsdóttir, fantasizes about a plumber, played by Kjartansson’s father, Kjartan Ragnarsson, in a sex scene on the kitchen floor. As family legend has it, Kjartansson was conceived the night after the film shoot. Kjartan Sveinsson, composer and a former member of the Icelandic band Sigur Rós, transformed the scene’s dialogue into a ten-part polyphony played by ten musicians, who sing and play guitar in the tradition of the troubadour to accompany a projection of the original film scene. 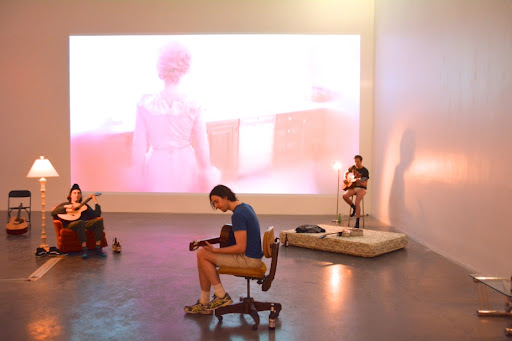 Other works in the exhibition are made in collaboration with Kjartansson’s parents, including a new series of drawings of the sea made with his father, entitled The Raging Pornographic Sea (2014), and an ongoing video collaboration with his mother where she repeatedly spits in his face, Me and My Mother, which began in 2000. This exhibition provides an opportunity to look at the way Kjartansson’s work explores family ties and delusions of grandeur, as well as to engage with his ongoing interest in the conflation of reality and fantasy.

“Ragnar Kjartansson: Me, My Mother, My Father, and I” is on view on the Fourth Floor from May 7–June 29, 2014. The exhibition is curated by Massimiliano Gioni, Associate Director and Director of Exhibitions, and Margot Norton, Assistant Curator.

The exhibition is accompanied by a fully illustrated catalogue featuring an interview with the artist and new reflections on Kjartansson’s practice by Francesco Bonami and Roni Horn.
On May 9, 2014, at 7 p.m., join artist Ragnar Kjartansson and his parents, Guðrún Ásmundsdóttir and Kjartan Ragnarsson, for a special screening of the film Morðsaga (1977), the first feature film produced in Iceland in which both Kjartansson’s parents performed.

Ragnar Kjartansson was born in Reykjavík, Iceland, in 1976, where he continues to live and work. His recent solo exhibitions and performances include “The Palace of the Summerland” at Thyssen-Bornemisza Art Contemporary, Vienna (2014), “The Explosive Sonics of Divinity” at the Volksbühne, Berlin (2014), “The Visitors” at Luhring Augustine Gallery, New York, Migros Museum für Gegenwartskunst, Zurich (2012–13), Thyssen-Bornemisza Art Contemporary Vienna (2013), Hangar Biocca (2013–14), “It’s Not the End of the World” at the Fondazione Sandretto Re Rebaudengo, Turin (2012–13), “Endless Longing, Eternal Return” at the Frankfurter Kunstverein (2011), and “Take Me Here By the Dishwasher: Memorial for a Marriage” at the BAWAG Foundation, Vienna (2011).

His first American solo museum exhibition, “Song,” was organized by the Carnegie Museum of Art in 2011 and traveled to the Museum of Contemporary Art in North Miami and the Institute of Contemporary Art in Boston. Additionally, Kjartansson recently participated in “The Encyclopedic Palace” at the 55th Venice Biennale (2013) and performed “A Lot of Sorrow” featuring The National at MoMA P.S.1 (2013). Kjartansson was the recipient of Performa’s 2011 Malcolm McLaren Award for his performance of Bliss, a twelve-hour live loop of the final aria of Mozart’s The Marriage of Figaro, and in 2009, he was the youngest artist to represent Iceland at the Venice Biennale.