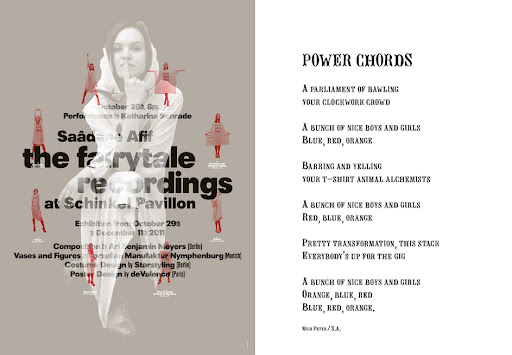 At the Documenta 12, Afif presented Black Chords Play Lyrics (2007), a work that translated the Lyrics project through his Power Chords (2005), first shown at the 2005 Lyon Biennale. Power Chords consisted of eleven white electric guitars propped up on stands that, with the aid of a computer program and rotating Perspex discs placed across their strings, seemed to be strumming themselves. The music they performed was arrived at by the artist through matching each of the colors in Cadere’s Barres de Bois to a “money chord” used by rock musicians, which is to say the popular chord progressions that cause fans to really lose it in the mosh pit and drivers in drab, Northern European towns to gun their cars like they’re speeding down Ocean Drive. 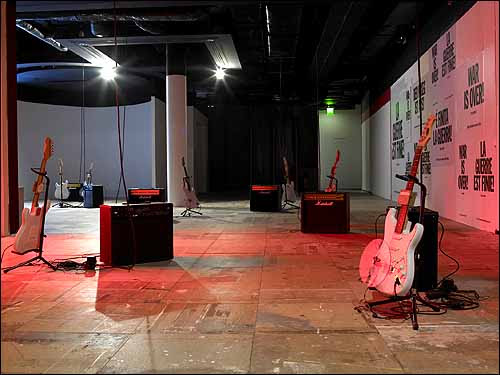 By “playing” these staffs — mobile works of art that Cadere would place, often uninvited and unwelcome, in other people’s shows — Afif embroiled the senior artist in an unbidden collaboration and transubstantiated the gritty irritant of his practice into pearly pop. The effect was not to neuter Cadere, but rather to socialize him, and to imagine a world in which his critique of the concept of the exhibition, something he saw as a microcosm of wider systems of taxonomy and control, might play to whooping, stadium-sized crowds. (“Good evening Basel; I’m Andre Cadere, and I’m here to rock the motherloving white cube!”) Black Chords Play Lyrics exchanged the white guitars of Power Chords for black ones, and Afif’s scoring of Cadere’s work with a musical transcription of the words written for the Lyrics project, which itself alluded to the Barres de Bois in the piece Ghost. What the artist set in motion at Documenta was a dense compacting of his recent oeuvre (it’s no accident that the color of the guitars recalled the result of an imploded white dwarf star, a black hole), in which cause and effect were shuffled, and it was impossible to tell which element was riffing on which or, for that matter, the sequence in which one collaborator passed the baton on to another-nobody, here, plucked at the guitars’ strings. Creative genealogies were erased, and the “retrospective exhibition” of the Lyrics project became a thing that belonged to right here, right now.
It is often said that a perfect pop song is one that makes you feel like you’ve known it forever on the first occasion that you hear it. Afif’s work — with its perpetual transformations, its way with freedom, beauty, and surprise-achieves something similar. Not a pirate’s sea-shanty, then, but rather the brilliant pop art of “Baby One More Time.”

Among the most inventive artists on the young French art scene, Saadane Afif works with notions of displacement and contrast. His pieces, vibrating with multiple meanings, function by using collusion as their driving force. He employs objects, scale models, installations, sounds, and writing to classify the unclassifiable and mirror-in the work of art itself - the dialog that arises between the viewer and the artist.


This dialog is continuously fueled by various allusions and is infiltrated on every side by historic, psychological, social, and cultural elements. In Saadane Afif's work there is a continuous movement of importing and exporting, of the pre-emption of signs that are immediately put back into circulation. His world is one of metamorphosis, the transformation of installation into a song, a wood sculpture by André Cadere into a lightshow, a guitar into a clock...


Born 1970 in Vendôme
Lives and works in Marseille and Glasgow

Eleven guitars mounted on tripods, controlled by a computer system that makes them play a riff based on the famous "money chords" that guarantee you a hit. In jazz, rock or easy-listening music and many other genres, these three-note chords, which feature at regular intervals in a given melody, have been part of music since the troubadours of the Middle Ages. The chords played by Saâdane Afif's guitars were composed using the colour codes of the famous sticks of André Cadere, an artist who acquired lasting fame for always walking around with stripy, painted multicoloured sticks of various sizes. Each stick was based on a logical mathematical sequence, to which Cadere added an error. Consequently, when the guitars play a series of riffs based on stick's colours, one of them is always dissonant… The text printed on one of the walls, Pop (Power Chords), is actually song lyrics written by Mick Peter, and based on Afif's work. 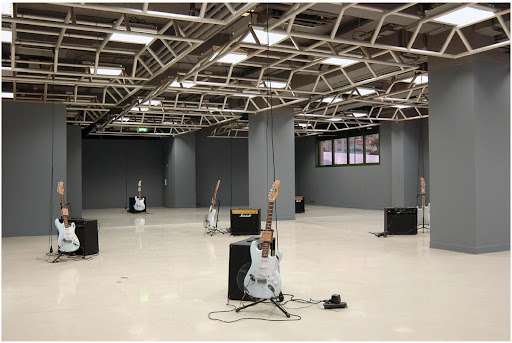