LOW: The Power & Beauty of Bass


In broad acoustic terms, “bass” refers to sounds that fall below 262 Hertz on the frequency spectrum. In musical terms it can refer to the instruments that make those low sounds as well as the sounds themselves. Its presence in music is critical. The pulse laid down by the bass is like an engine. A whole band will move or not move depending on the actions of the bass. And the notes played in the bassline are like a compass. The lowest sounding pitch can help us find true north, or the harmony of the music.

This exhibition introduces several aspects of the low register—bass—experience. Our goals are to open your eyes, ears and imagination to this sonic realm, and to inspire you to incorporate this new awareness into your everyday activities.

In this part of the exhibition, visitors can engage with four different interactives, all developed by Dr. Chris Warren.


Who is Dr. Warren? Chris is a sound artist, signal processing researcher and musical instrument inventor. He earned an M.A. in Music, Science and Technology from Stanford University, and a Ph.D. in Computer Music from UCSD. His research in acoustic measurement produced the EchoThief Impulse Response Library. These sonic snapshots of distinctive spaces throughout North America provide one of the most rich and varied collections of reverbs available. He is a resident artist at Space4Art in San Diego and performs with the group A Hundred Ghosts. He teaches music composition at San Diego State University. His scoring work can be heard in the new KPBS radio series Incoming.

An engaging video explores how bass waves can be seen, using water in a subwoofer or through a hose.

#2: SEE Your own voice
Ernst Chladni (1756–1827), musician and physicist, developed a unique method to make sonic vibrations visible. He covered thin metal plates in sand and then bowed them like a violin to make them vibrate. Sand moves away from the areas in motion (antinodes) and collects in the areas at rest (nodes).

By measuring the distance between these nodes and antinodes, Chladni could see that low frequencies create large wavelengths while high frequencies create shorter ones. In the LOW exhibition room, this digital recreation of Chladni’s experiments uses the sound of your voice to move pixels around like grains of sand. See the difference in how it reacts to a low growl or a high whistle!

#3: HEAR LOW SOUND
Transform you voice. In opera, the lowest male voice is known as basso profondo, Italian for “deep bass.” In this interactive, visitors can sing into the microphone to transform your voice into a basso profondo.

#4: FEEL LOW SOUND
Feeling the Low End. Bass waves can be felt as well as seen and heard. Experience it for yourself. This interactive uses a musical product called the “ButtKicker,” a low frequency audio transducer designed specifically for musician monitoring, stage and studio use. Dave Garibaldi of the group Tower of Power, explains the impact of this product in a live performance setting: “The ButtKicker has helped me to feel my bass drum as well as hear it. Oftentimes the sound of my bass drum is lost with the bass. The ButtKicker has changed all of that.” Mickey Hart (famed Grateful Dead drummer) says, “Thanks to my ButtKickers, I can actually FEEL the low end on stage which my in-ear monitors just can’t re-create.”

Under the musical direction of Kamau Kenyatta, a series of videos showcase the thoughts, insights and musical expressions of artists who play low register instruments.

Who is Kamau Kenyatta? Kamau Kenyatta is a pianist, saxophonist, GRAMMY Award-winning producer and arranger, and a lauded lecturer at the UCSD Music Department. He has worked with jazz greats including Hubert Laws, Donald Byrd, Yusef Lateef, Jim Pepper and Earl Klugh. World tours have taken him to over 20 countries and include stints with The Supremes, Carl Anderson, Oscar Brown, Jr., SWV, Silk, the Watts 103rd Street Rhythm Band and New Kids On The Block. His 2007 recording Destiny is his most recent release as a leader.

His work as a producer and arranger with vocalist Gregory Porter has yielded two 2013 GRAMMY nominations, and a 2014 GRAMMY win (Best Jazz Vocal Album) for his work on Porter’s Blue Note Records debut disc Liquid Spirit. Kamau has also produced Porter’s upcoming 2016 release, as well as a groundbreaking project with Brazilian vocalist and composer, Ed Motta. 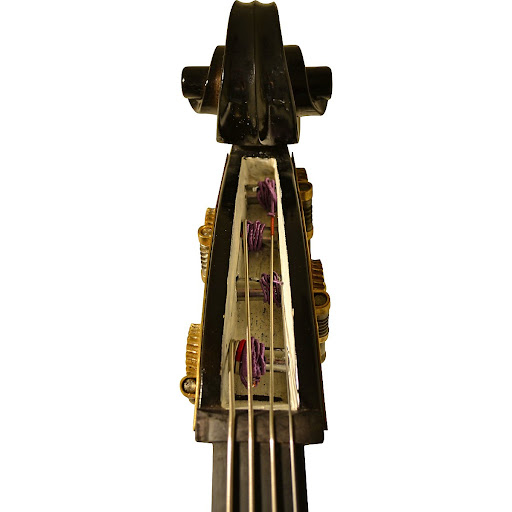 WITH OR WITHOUT BASS?

Discover what music would sound like if the bass part were missing. Guests can watch a video or listen to the music selections on an interactive iPad to hear (and see) music played with and without bass. Do you think it makes a difference? 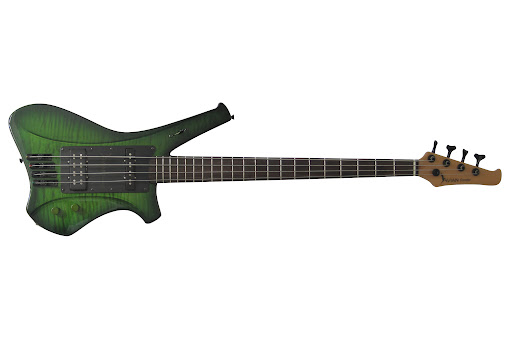 The instruments and products on display in this exhibition are a small sampling of the many low register instruments that exist in today’s musical world. 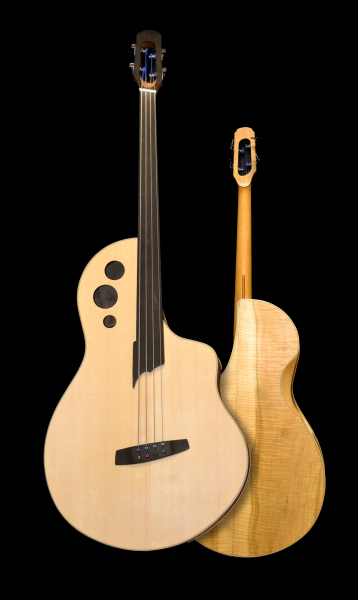 Fleishman Big Compact Bass - Luthier Harry Fleishman's 2015 Compact Big Acoustic Bass is the culmination of nearly 40 years of development to make an acoustic bass that is compatible with acoustic guitars. It is made from curly maple, ebony and mahogany.

Didgeridoo is a musical instrument that originated among the indigenous people of Australia. It’s made of a hollowed out log and is usually played sitting down. A low drone sound is produced by continuously vibrating one’s lips, and a continuous tone is created through the use of circular breathing – simultaneously breathing in through the nose and out through the mouth.

Bass Clarinet (Jupiter 675N) The bass clarinet is a single reed woodwind instrument that was developed in the late 18th/early 19th century. It can play notes an octave lower than the more commonly heard B-flat clarinet and also has a large dynamic (loud/soft) range.

Bassoon (Jupiter 363) The bassoon is a double reed instrument of the woodwind family that has a rich history spanning several centuries. While considered a low register instrument, it is not as low as the contrabassoon whose bore is 15 feet 8 inches long, compared to the bassoon’s 7 feet 9 inches. 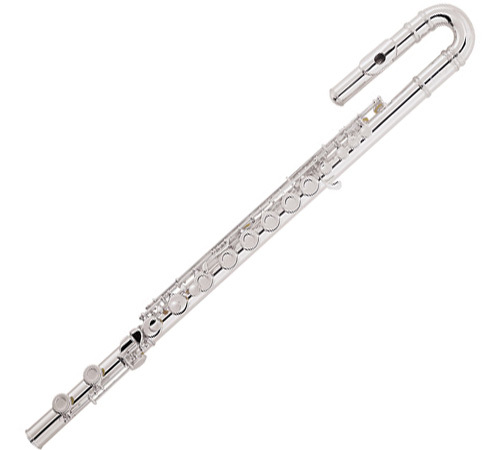 Alto Flute (Armstrong Step Up Model 703 “Heritage”) The alto flute sounds a fourth lower than the more common C flute. Its tube is longer and thicker than a C flute and thus requires more breath from the musician. The headjoint of the alto flute may be straight or curved to accommodate different arm lengths.

Bass Trombone (Jupiter XO 1240) Unlike brass instruments that use valves to change pitch, trombones typically use a “slide” mechanism. In order to play the right note in tune, a trombone player develops very accurate muscle memory to know where the slide must stop. The ancestor to the trombone appeared in the 15th century and was called a “sackbut.”

Tuba (King Student Model 1135W) The tuba is the lowest sounding instrument in the brass family. It was incorporated into bands in the mid-19th century and replaced its predecessor known as the 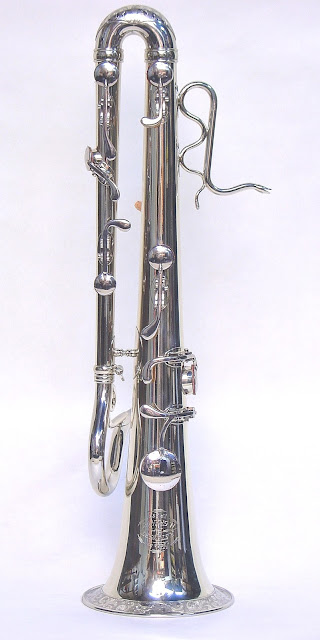 Ophicleide. The main tube of a B-flat tuba is approximately 18 feet long. 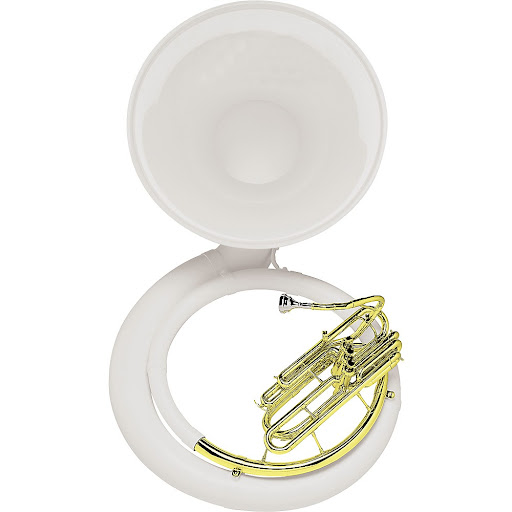 Sousaphone (C.G. Conn 36K Series Fiberglass BBb) The Sousaphone is a type of tuba and is the descendant of an instrument known as the Helicon. The main difference is that the latter has a moveable, directional bell. The first Sousaphone was created by J.W. Pepper reportedly at the request of John Philip Sousa himself.

Baritone Horn (King Student Model 623) The baritone horn belongs to the brass family and is commonly played in school bands and marching bands. If laid out flat, the tubing of a baritone horn would be 9 feet long. Compared to the euphonium, it has a smaller and more cylindrical bore. This causes the sound to be somewhat more strident than the larger euphonium. 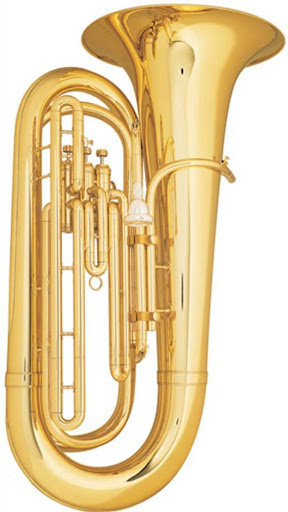 Marching Tuba (King Student Model 1140MW) The marching tuba is similar to the concert tuba listed above, however you will notice that its piston valves are positioned differently to facilitate a different playing position.

Baritone Saxophone (Jupiter 593GL E-flat) Commonly referred to as the “bari sax,” this instrument is larger (thus lower sounding) than the soprano, alto and tenor saxophones, but not as large as the bass, contrabass or subcontrabass saxophones! The saxophone family was invented by the Belgian musician and instrument designer, Adolphe Sax (1814–94) who was looking for an instrument that had the power of brass with the expressivity of the woodwinds. 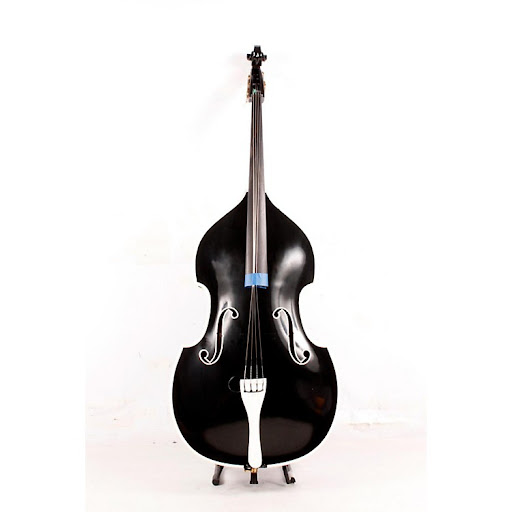 Bass (Silver Creek LR-102 Lee Rocker Tuxedo) The upright bass, also known as the double bass or simply bass, is the largest and lowest pitched stringed instrument in the orchestra. The bass on display is different from an orchestral instrument. Instead of the natural wood finish, it has a black laminate finish and is set up to be played Rockabilly “slap bass” style. It is endorsed by famed rockabilly bassist, Lee Rocker. 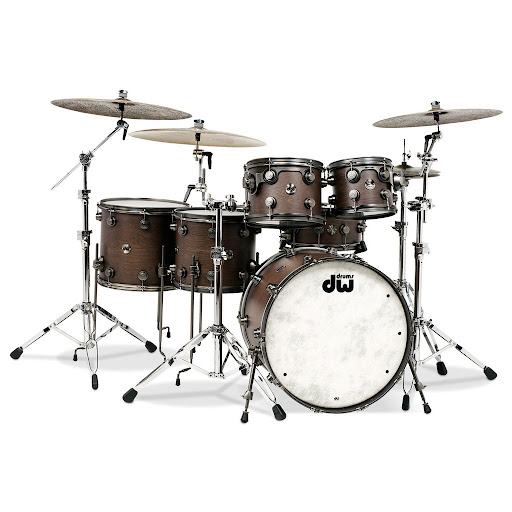 EarthQuaker Devices “Bit Commander” This is a monophonic analog guitar synthesizer. Octave effect boxes are a type of special effects unit which mix the input signal with a synthesized signal whose musical tone is an octave lower or higher than the original. 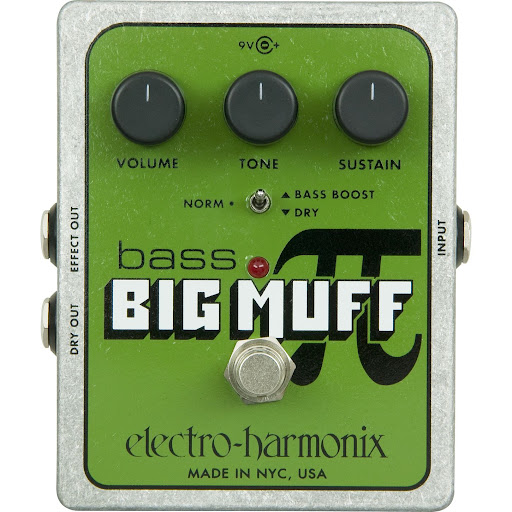 Electro-Harmonix “Q-Tron+” Envelope Controlled Filter An envelope controlled filter is a type of wah-wah effects pedal. The distinctive choppy rhythm guitar sound on many funk and disco recordings from the 1970s popularized the effe