I first became aware of Cy Twombly's work in the early 1970s, through catalogues and occasional sightings in European museums of his sensitive and sometimes luscious paintings, with their highly personal response to classical cultures and contemporary painting.
It is always a privilege to visit an artist in their studio. It is a challenge to be confronted with unfamiliar and new work, and to gain an insight into the creative process. It's one of the reasons I can't give up curating. Recently, I have been working with Nicholas Cullinan of the Courtauld Institute of Art on Tate Modern's Cy Twombly exhibition, called Cycles and Seasons. This will be the most important exhibition of Twombly's work anywhere in the world for 15 years, during which time he has made some astonishing new works.
Over the past year we visited Twombly in Rome, and in his studio in Gaeta on the coast, halfway between Naples and Rome. This provided a rare opportunity to interview him about his work; the only other interview with him ever published was with David Sylvester in 2001. For me, it was a great pleasure to talk to an artist whose work I have for so long admired.
The following are extracts from our lengthy conversation. They provide illuminating insights into the complexities of the many references in his artworks and the thought processes that have helped him to make work so many people find intensely moving. 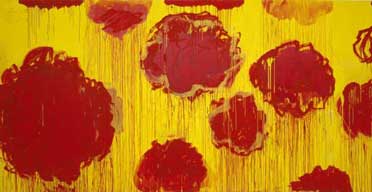 Painting by Cy Twombly from his A Scattering of Blossoms series.
Photograph: Gagosian, London
A Scattering of Blossoms series
I work in waves, because I'm impatient. Because of a certain physicality, of lack of breath from standing. It has to be done and I do take liberties I wouldn't have taken before. I got all kinds of wonderful effects that I never achieved before. Sometimes it's simplistic. It's hot, so I do some cool paintings. Lots of times I like to enjoy myself. I think I'm in a good point of working.
The Ferragosto paintings
They were done in Rome, when I had to stay there in August. I was completely crazy, out of my mind with [the] heat.
Paint is something that I use with my hands and do all those tactile things. I really don't like oil because you can't get back into it, or you make a mess. It's not my favourite thing - pencil is more my medium than wet paint. I did by mistake paint on a picture in Lexington and then quickly put an image on top. And I got into the wet. I had the background painted, worked into it and then merged the background and surfaces. Before, I always had a dry background and painted on. Now, I have someone paint the background that I have already figured out.
I used to change things in my early paintings to get the nuance or feeling I wanted, but now I plan everything in my head ­before I do it. Also the scale of the things - they are big and I can't get on the ladder all the time, it hurts. So they are more thought out. I have drawn little sketches of things.
Coronation of Sesostris series
When I work, I work very fast, but preparing to work can take any length of time. It can even be a year. These were started in ­Bassano and hung upstairs for years. I like the sun disc because I managed to do very childlike painting, very immediate. Then I took them to Virginia and finished them - wound up at the end with a detail of Degas's The Cotton Exchange in New ­Orleans. How it got in there, I don't know, but it's one of my favourite sets.

Virtual exhibition walk-through of Twombly's BLOOMING: A SCATTERING OF BLOSSOMS AND OTHER THINGS, at Gagosian Gallery, 21st st.

Trebuchet produces virtual walk-throughs for every Gagosian NYC and LA exhibition, all viewable at: gagosian.com
trebuchetweb.com

On graffiti
Graffiti is linear and it's done with a pencil, and it's like writing on walls. But [in my paintings] it's more lyrical. In those beautiful early paintings like Academy, it's graffiti but it's something else, too. I don't know how people ­react, but the feeling is more complicated, more elaborate. Graffiti is usually a protest - ink on walls - or has a reason for ­being naughty or aggressive.
On colour
I'm not too sensitive to colour, not really. I don't use it with any nuance that I know of. The form of the thing is more interesting to me than colour. I take the ­colour as primary - like, if it's the woods, it's green; if it's blood, it's red; if it's earth, it's brown.
The Bacchus paintings
These were all done in a couple of months. It was just very ­physical; it's a process. I tried to do one since then, but it didn't work. It was the sensation of the moment; you can't warm it over, unless you want mannerism. When it does come, it's natural. I don't force it.
I'm not a professional painter, since I don't go to the studio and work nine to five like a lot of artists. When something hits me, or I see a painting, or when I see something in nature, it gives me a thing and I go for it. But I don't care if I don't go for three or four months. You know, when it comes it comes.
Sculpture
I did them a certain scale so I could carry them around. Small, because I like to be able to look at them.
Most of these things could be of any scale; what they are is what is important.
I like 90% of [my sculptures]. There's a certain perfection in most of them. It satisfies a part of my character, I guess, whereas with paintings, anything goes; you know, get the brush!

On his early career: Black Mountain College, North Carolina
It was the first time I'd been in an atmosphere of artsy-ness. I enjoyed it. Everything revolved around [poet and college rector Charles] Olson. A lot of people were there mainly to see Olson. Bob [Rauschenberg] was working with [John] Cage. I was always doing my own thing.
When I came to Rome I ­always wondered why there were books, with photographs, on all the ­artists of my period and I was only in one! I thought: where was I? But I never was there. I was somewhere else.
On fame and success
I don't follow too much what people say. I live in Gaeta or ­Lexington, Virginia, and I just have all the time to myself. I had years and years when no one could care less, so I was very well ­protected. I had my freedom and that was nice.
Yes, Bob [Rauschenberg] and Jap [Jasper Johns], which is a whole another world from me, came in - particularly Jap, he did very great paintings here for a while. And then Bob, who was ­always an enfant terrible, came. But probably they were too ­conscious of who they were. I didn't have to bother with ­myself ever, except as a vehicle to look for subject matter.
You know, my parents were from New England. It's very funny, but when I grew up you ­always had to say, "Yes, ma'am" and "Yes, sir". And you were never to talk about yourself. Once I said to my mother: "You would be happy if I just kept well-dressed and [had] good ­manners," and she said: "What else is there?"
· Cy Twombly: Cycles and Seasons is at Tate ­Modern, London SE1, from June 19 to September 14. Details: 020-7887 8888 or tate.org.uk
Publicado por Miguel Copon en 10:56 PM