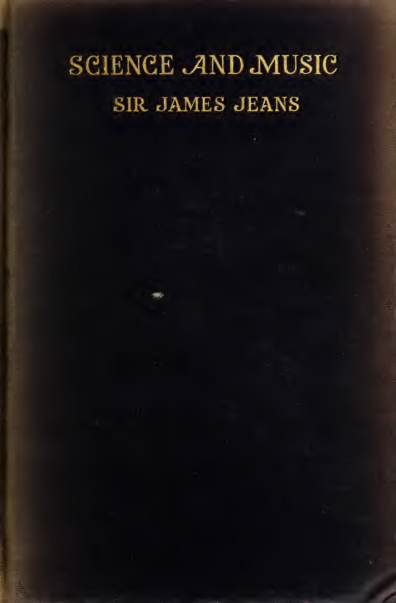 The distinguished physicist describes the scientific principles of musical sound in a precise, non-technical way that will engage both amateur and serious musicians. Topics include development of human hearing, general properties of sound curves, transmission and reproduction of sound curves, methods of producing sound, and harmony and discord. Includes 75 illustrations.


Let us end by quoting further from The Mysterious Universe (1930):

The terrestrial pure mathematician does not concern himself with material substance but with pure thought. His creations are not only created by thought but are pure thought. ... And the concepts which now seem to be fundamental to our understanding of nature ... four dimensional space, a space which expands forever; a sequence of events which follows the laws of probability instead of the laws of causation; all these concepts seem to my mind to be structures of pure thought. To my mind the laws which nature obeys are less suggestive of those which a machine obeys in its motion than those which a musician obeys in writing a fugue, or a poet in composing a sonnet. ... If all this is so, then the universe can best be pictured, although still very imperfectly and inadequately, as consisting of pure thought, the thought of what, for want of a wider word, we must describe as a mathematical thinker.