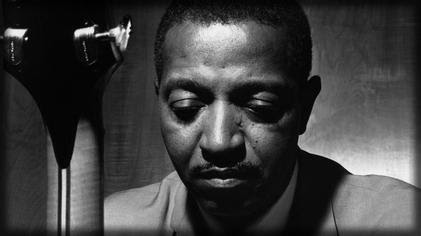 "It's not what we don't know that hurts us; rather, what gets us into trouble is what we are absolutely certain of that just ain't so."
- Mark Twain

The Dynamic Chord and Muted Notes (DCMN) analysis of Freddie Green's Rhythm Guitar Style: What's in a "One-Note" Chord?
This superb article by contributor Mark Allen expands upon the "One Note Chord" theory first put forth by Michael Pettersen in the DownBeat article above.
Freddie Green: A Musical Analysis of the Guitar in the Count Basie Rhythm Section
A THESIS by Matt G. Buttermann submitted in partial fulfillment of the requirements for the degree of Master of Music in Jazz Performance in the College of Arts and Communication, William Paterson University, May 2009.

Freddie Green: He Did Indeed Play One Note Chords
Guitarist James Chirillo has performed with jazz legends Benny Goodman, Benny Carter, and the Lincoln Center Jazz Orchestra. He offers insightful comments about the rhythm guitar technique of Freddie Green.
How the 1930's Jazz Environment Shaped Freddie Green's Approach to Rhythm Guitar
This article is by Gunther Schuller and is taken from his book, The Swing Era.

Alternate Perspectives from Respected Professional Guitarists About the "One Note Chord" Theory
These comments were posted with permission from a newsgroup discussion.
Freddie Green: Birth of a Style
Contributor David Ness provided this article which was published in the November 1999 edition of the IAJE's Jazz Educators Journal.

Basics of Freddie Green Comping
An article by Tim Berens, guitarist for the Cincinnati Pops Orchestra, shares many useful insights about the big band guitar style.

Right-Hand Man: The Rhythm Secrets of Count Basie Guitarist Freddie Green
John Lehmann-Haupt wrote this article for the May 1998 issue of Acoustic Guitar magazine. It has been condensed from the original and covers only the sections that directly relate to the style of Freddie Green.
Harmonic Techniques to Create Moving Chord Progressions using Three Note Voicings - Part 1
An exercise and analysis of typical Freddie Green chord voicings based upon the structure of "I Got Rhythm" by Michael Pettersen.

Amplifying an Acoustic Archtop Guitar in a Big Band
Michael Pettersen offers useful tips and techniques for microphones, amplifiers, and more.
Paul Meyers: Down For Double with Jon Hendricks and Annie Ross
Excerpts from a May 2002 online interview with guitarist Paul Meyers. Insightful comments about the playing technique and chord voicings of Freddie Green.

A Comparative Study of Rhythm Guitar Styles
This article by Michael Pettersen examines and compares Western Swing, Allan Reuss, Teddy Wilson, Barry Galbraith, and Freddie Green on a 12-bar blues chord progression. The article also contains biographical information on each of the players.

Freddie Green's Positional Leaps on the Fingerboard: A Hypothesis
Guitarist Andrew Snee offers a hypothesis on a puzzling aspect of Freddie's playing technique.
"I Got Rhythm" in the style of Freddie Green
Michael Pettersen offers his version of how Freddie might have played "Rhythm" changes.

Turk Van Lake's Rhythm Guitar Articles from Metronome Magazine 1957-58
Rhythm guitarist Turk Van Lake wrote a series of articles on guitar for Metronome magazine in the 1950's. Five of these articles were specifically about rhythm guitar and appeared in July 1957, September 1957, December 1957, February 1958, and June 1958. Here are all five articles, edited for clarification.

Dispelling Myths about Freddie Green's Technique
Michael Pettersen reminds us not to beleive everything we read.
Rhythym Guitar: Lessons I Have Learned
Guitarist Jerry Krahn shares many insights from his extensive career as a professional musician.

Thoughts on Rhythm Guitar
Guitarist James Chirillo performs regularly with Jazz at Lincoln Center. Based in the New York City are, James is a superb jazz guitarist and he is particularly passionate about rhythm guitar.

Blues For Pep
Michael Pettersen composed a tune in honor of Freddie Green on the 95th anniversary of his birth.

The Improvised Counterpoint of Freddie Green by Trevor de Clercq
Trevor de Clercq authored this fine academic paper as part of his MA/PhD studies at Eastman School of Music.
Did Freddie Green always play the guitar chart "as written?"
An analysis of a live performance video in which Freddie's the chart for "Magic Flea."


Sincere thanks to all of the authors for allowing us to
share this information with our visitors.