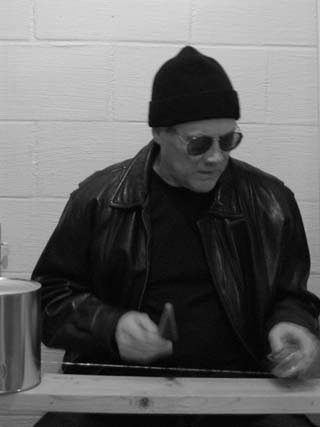 One String Willie
Primal Slide Guitar: Exploring the Limits of the Diddley Bow
As One String Willie, I make music on the one-string diddley bow, beating out a rhythm on the single wire string, while changing its pitch with a flat glass bottle slide. I am working to explore the limits of this primal instrument by moving beyond traditional playing styles.

I invite you to turn off from the main musical highway by building your own diddley bow and then teaching yourself to play it. I invite you to search out new musical paths or old ones that were lost and all but forgotten. There are no "rules" for playing this instrument--you can take the time to work out for yourself the different ways to make sounds come from a single string, and to integrate these sounds into your own music. You will then have something that is satisfyingly and uniquely your own.

With the information on this site, it is possible to build a perfectly good basic diddley bow in about 5 minutes if you have all the pieces and tools handy. A portable version is made from a board with an nail driven into each end, a piece of steel wire stretched between the two nails and tensioned by slipping a small jar or bottle under the string and pushing it as close to one of the nails as possible. A small scrap of wood is slipped under the string and pushed as close to the other nail as possible. Traditionally, the string is struck in a rhythmic manner with a finger or a stick or some other implement, and the pitch of the string is altered by using a slide made of glass, metal or some other hard substance. A diddley bow is slide guitar stripped down to its most elemental level.

I have obtained a quantity of unused, tin coated standard steel broom wire (18-1/2 gauge, 135,000 psi tensile strength) and am offering it in 23-25 foot lengths through my store on etsy.com. This should be enough wire to make approximately seven medium-sized diddley bows. Look under "Make a Diddley Bow" for the "Wire for the String" page.

I have also written two articles in Issue 23 of Make Magazine: one on building a diddley bow with an improved method of establishing position marks http://makeprojects.com/Project/Making-a-Diddley-Bow/14/1 , and one on winding your own electomagnetic pickups on sewing machine bobbins, and have been interviewed for a book by Mark Frauenfelder, Made By Hand: Searching for Meaning in a Throwaway World.

I am in a recently released book by David Sutton, Cigar Box Guitars: The Ultimate DIY Guide for the Makers and Players of the Handmade Music Revolution. This book has a chapter on how I build my own electromagnetic pickups on sewing machine bobbins. Check it out!
The Diddley Bow
Build this slide guitar with just a board, a wire, and a jar. 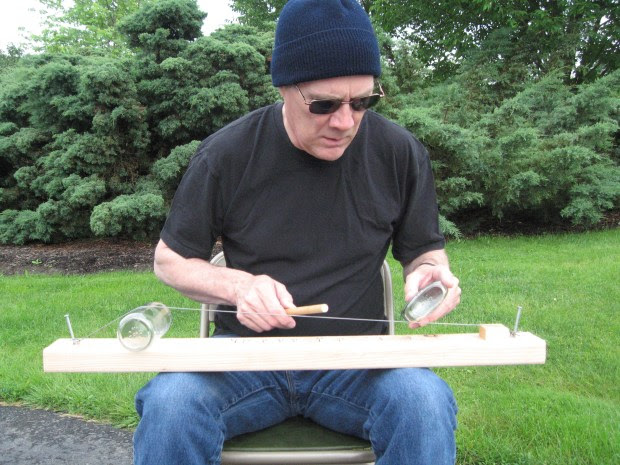 Build the elemental slide guitar, from just a board, a wire, and a jar. Maybe you saw Jack White playing one in It Might Get Loud; now make your own for pennies.


About the Diddley Bow

After reading Alan Lomax’s excellent book The Land Where the Blues Began, I developed an interest in the diddley bow, a primitive one-string guitar rarely heard outside the rural South. Shane Speal, founder of the current cigar box guitar movement, suggested that I get the CD One String Blues, which featured nine cuts by diddley bow master Eddie “One String” Jones. The performances were stunning — raw, percussive, and deeply compelling.

After just one listen, I knew I needed to build and learn to play this instrument. On the first track of the CD, Jones described how he had built his diddley bow; a drawing of his instrument and two photos were included in the CD insert. With this information, I built my first traditional diddley bow.

In the South, the diddley bow is considered an informal practice instrument, built from found or recycled materials. Here’s how to build a stable, good-sounding instrument in about 10 minutes.
Traditionally, the string is struck in a rhythmic manner with a finger or a stick or some other implement, and the pitch of the string is altered by using a slide made of glass, metal, or some other hard substance. The diddley bow is slide guitar stripped down to its most elemental level.
WARNING: If you build a diddley bow, be aware that the wire is of unknown tensile strength and is being brought to unknown tension; in addition, the board and the glass jar bridge are both under compression. Use face and hand protection when tensioning up the diddley bow. Please use good sense when building, tuning, and playing these instruments.

Wire for the string. Get a couple of pieces.
Board, about 3′ long for the body
Short piece of pipe, or a sturdy, straight-sided glass jar or some other fairly rigid object, for the bridge. Do not use a baby food jar — they’re too fragile.
Scrap of wood for the nut
16-penny common nails (2)
6-penny finishing nails (2)
Flat glass bottle, half pint for a slide
½” stick about 6″–7″ long to beat out a rhythm on the string
Saw
Hammer
Side-cutting pliers
Combination (half-round) rasp These are round on one side.
Permanent marker