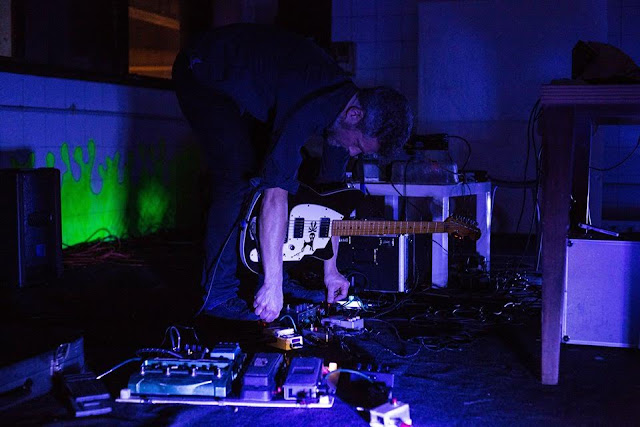 American guitarist Eric Arn and his Primordial Undermind have mined the farthest regions of avant-rock, free improv, drone and psychedelia for over two decades. Arn began playing in the 80s in the Crystalized Movements (the Twisted Village band that spawned Magic Hour and the Major Stars) and has ridden with the Undermind through residencies in California, Boston, and Austin, Texas before settling in Vienna, Austria in 2005.

Primordial Undermind  begun when Eric moved to California in 1988, first recording an album of demos with the Bevis Frond's Nick Saloman in London in 1989.  The band has a policy of open, collective membership, leading to numerous lineups over the years. Their Los Angeles residency from 1990-1995 produced two 7"s,  a cassette on Shrimper (And All Tall Monsters Stand),  and the "Yet More Wonders of the Invisible World" album on German label September Gurls in 1994. 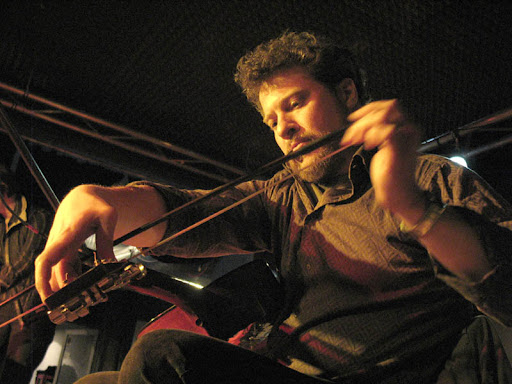 In 1996 the band relocated to Boston, appearing at the Deep Heaven events (which they in large part initiated), and the Terrastock festival, and releasing "You and Me and the Continuum" on Australian label Camera Obscura. In 1998 the group moved to the San Francisco Bay area where they performed at Terrastock II and recorded PU's third album "Universe I've Got" prompting the band's first tour. 1999 found the band moving to Austin, Texas. Here, a quartet including Tom Carter (Charalambides) recorded the Undermind's fourth album "Beings of Game P-U" and a full septet produced "Thin Shells of Revolution"  for the Emperor Jones label. The band appeared at SXSW and toured further with Kinski,  the Davis Redford Triad, and ST37. Since relocating to Vienna in 2005, the band has released additional studio and live albums on Strange Attractors Audio House, Reverb Worship, and Feathered Coyote Records. They tour semiregularly around Europe and remain in their usual constant state of flux.

Eric also performs solo, and as a member of the Soft Power Ensemble of Vienna, the Xmas Party and the Vienna Improvisers Orchestra. He released his first solo album, Points of Fissure, on Feathered Coyote Records in 2013. 2014 saw the release of Alchemy in the West Country, a collaborative album by Primordial Undermind and Thought Forms, as well as the premiere release by Outer Vertex, an out-guitar duo with Christoph Weikinger (aka Torùn). 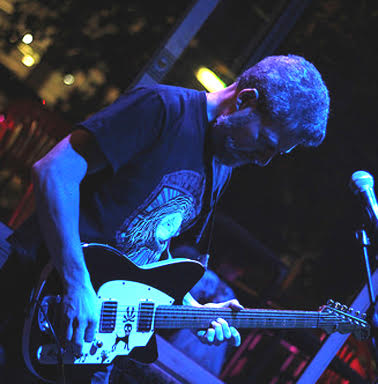 Music seems to be a basic and essential mode of human expression and communication. For me, the music I hear (and hopefully the music I make) conveys and at best evokes experiences and states of mind that can't be expressed nearly as well through written texts, images, sculptures, etc.  Yeah, I'm sure I couldn't live (sanely) without music.  Sure, it seems that many people no longer value it as I think it deserves, but given how ancient music is, and how central it has been to so many aspects of life for humans, I don't think that's healthy. Hell, the Neanderthals were making flutes more than 40,000 years ago, though music almost certainly goes back much further than that.  It's connected directly to the essence of human consciousness.  Probably for a lot of animals, too, even if we're not aware enough to get the message.

I always identify with artists who seem to be obsessively following their own paths to explore a unique vision of something new and different.  I generally feel bored by musicians who too slavishly conform to some genre conventions or obviously imitate other artists (even great ones).  I don't see the point in reinventing the wheel, inhabiting old forms - even if it's done to formal, technical perfection

Quite random, I'm afraid.  I'm constantly trying to find more time in the day to just sit down and play, alongside everything else that I need to do to get by. Practice is not any kind of chore or duty for me; whenever I can make the time to play either on my own or with others, I fully enjoy getting deeper and deeper into it until I'm lost in the flow.  Then some hours can slip by, if I'm not careful…

I'd say that depends entirely on the results it produces.  Technique is no end in itself, just a tool like any other in that it can be used well or badly.  If it facilitates achieving a result you're seeking, reaching new aesthetic ground, then great. If it restricts your thinking or your potential approaches to a problem, or becomes a distraction from or a substitute for dogged pursuit of your aesthetic goals, then that's not helpful.

There are so many!  But one thing that really obsesses me is a type of sound I often imagine, and can sometimes hear, which embodies a kind of absolutely abstracted, rarified, astringent ascetic purity.  It's the sound resonating inside the skulls of meditating zen monks, the sonic emanations of an immaculate Greek temple of perfect proportions formed in white alabaster, the distilled, hushed roar of the void.  The closest I have come so far can be heard in certain parts of 'Resonantform' on my Points of Fissure album.  But I'm not all the way there yet.

Tell me one impossible project you would like to realize.

Sometimes I dream about, and even make plans and sketches for, an attempt at a really grand 'Gesamtkunstwerk' to be played in a proscenium theater with an improvising orchestra, plus a rock band, a choir and an electronic ensemble as well as dancers, projections, kinetic lighting, spoken word passages, and various aromas released in the room.  It will have a rather grand theme based on the rites of Eleusis and Orpheus, but transposed to modern referents.  In a different type of society, it would also involve aerosol dispersal of short-term psychedelics.  I expect it's too ambitious and expensive for me to actually realize, but I believe envisioning and planning it is a useful exercise anyway.

It's generally a necessary evil. When I listen to my own recordings, I tend to automatically focus on the problems and shortcomings of it, so it isn't usually a very pleasurable experience, but hopefully it leads to more subsequent refinement.  There are however, those occasional moments when I hear something I've done without too much conscious attention, and I can appreciate the positive aspects of it. Once while living in Austin, I had the radio at work tuned to a local station, and when I left the room and returned, I heard a band absolutely freaking out and thought, "that's cool, I need to find out who this is and look into them".  After about 30 seconds, a recognizable riff came in and I realized I was actually hearing a Primordial Undermind cut and just blindly enjoying it.  I felt good about that.

No secret, but one obvious one for me is the author Samuel R. Delany.  I discovered his work at the age of 12 or so, and have been obsessively reading and rereading his books ever since.  His writing, especially his magnum opus Dhalgren, just has the effect of resetting my synapses to a wide open state, taking my thoughts and creative urges in so many directions that I might never have considered otherwise. 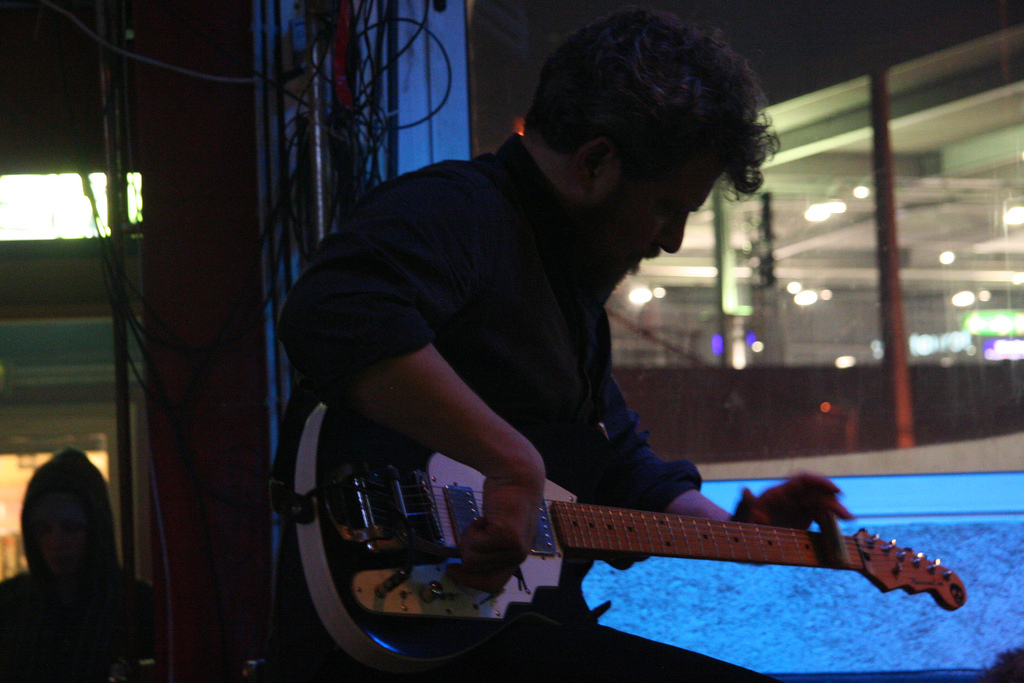 I feel the same way about reading J.G. Ballard, Gene Wolfe, Roger Zelazny, John Brunner, Joanna Russ and Jorge Luis Borges - my discovery of all of which was thanks to some anonymous rebel of a librarian who managed to stock the rather conservative shelves of the small town library in Rockville, CT with tons of experimental "new wave" science fiction and other brain-bending creative literature sometime in the 1970s.

I would have told myself to just go for it, to live for it 100%, follow the passion, and not worry about the consequences.  Where and when I grew up, I had really no idea about people making their own lives/careers through music.  I heard rock/pop stars on the radio, and saw cover bands at school dances and weddings, but that was it - and I didn't see myself ending up as either of those. 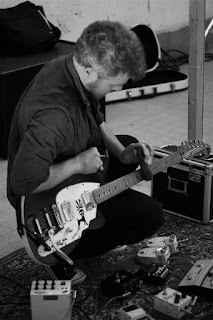 Also, I would say that the culture where I grew up (protestant New England in the 1970s/80s) discouraged people from exposing themselves through creative endeavors.  Therefore I always felt I needed a 'real' career that would pay the bills, and music would just have to exist outside of that.  Shame.  But I do what I can to make up for that now.

I was working in the laboratory one hot California afternoon after pulling an all-nighter when I heard Toru Takemitsu's "A Flock Descends into the Pentagonal Garden" for the first time, on a public radio station in Los Angeles.  The combination of that piece, with it's evolving and interacting drones, alien harmonies and off-kilter crescendos with my state of mind at the time really blew open some doors.  It opened me up to some intriguing possibilities, and cast a tantalizing pale shadow of that astringent, rarified sound I mentioned as a standing goal of mine. Subsequent listenings have never produced quite the same effect, but hey you can't put your foot in the same river twice, and the memory of that first time remains vivid.

I have gotten so much valuable advice/experience regarding playing and improvisation in the last 10 years by playing with free jazz sax legend Marco Eneidi in his long-running weekly sessions and occasional workshops here in Vienna.  Two things stick in my mind - he often let people get an improv going, feel each other out, find a good space to work in, etc, and when things got really intense he would stop the piece and tell us "remember this moment - this is where it should begin.

Why waste time skirting around things? Start from this place and then go on from there."  The next piece would always be killer.  And also the essential idea of "take the first exit." When you hear a good ending, then end!  You can always play another piece.  That's one thing I wish a lot more people would learn.

I try to keep it fairly simple, as I haven't come close to exhausting the possibilities offered by: a 2003 Reverend Rocco (with a maple fretboard, Bigsby tremolo, coil taps and phase switching, and of course Joe Naylor's hot humbuckers) and a 2008 Larrivee L-03R (with a Fishman Matrix pickup). A heavy brass slide, a cello bow, and a fat wooden stick (actually a singing bowl striker) have become essential accessories for me. A Recitalbox adds an interesting dimension to the Larrivee in unamplified settings.

Effect pedals and their combinations change the most, but normally include distortion, fuzz and delays.  The EHX Freeze pedal was a revelation and gets a lot of use (often 2 of them in series). I've also been playing around with a Boss MO-2 this year, and I find a lot of uses for it, especially surprising for me as someone who really doesn't care for standard chorus effects.  For solo or duo playing, I've also been doing a lot of splitting the guitar signal and putting it through different effects chains.  Spreading 4 to 6 channels across the stereo field can really fill up a room and create some fun interference effects. 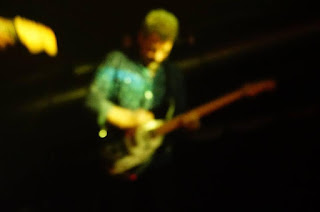