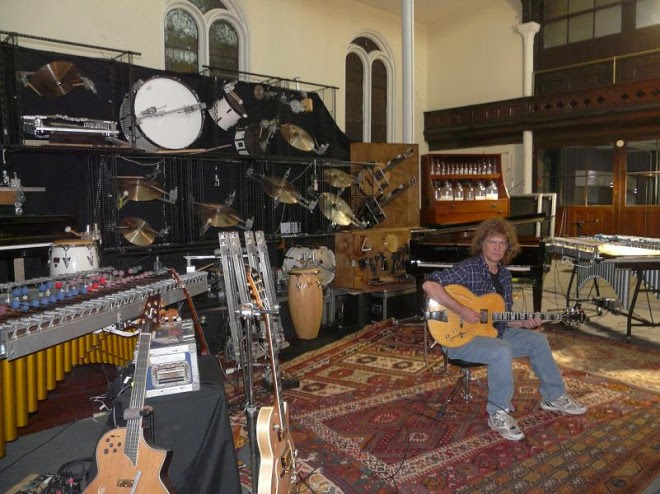 BROOKLYN, New York — Dozens of robotic band members will join jazz guitarist Pat Metheny on his next international tour. It’s the same backup band that accompanied him on his latest album, Orchestrion, producing sounds both familiar and alien.
The four-month tour runs February to May, giving people all over the world a chance to see and hear Metheny play his original compositions for acoustic guitar and robot orchestra in a live setting.

LISTEN: Orchestrion sample
Orchestrion sounds really interesting on CD, sort of like a jazz gamelan with an extraterrestrial twist. Robotic musicians can handle tasks that humans cannot, opening new compositional possibilities. And yet the robots also sound somewhat human, because a human — Metheny — programmed each note they play. To do so, he typically strummed notes on his guitar corresponding to the notes on each of the robot marimbas, pianos, guitar-bots, glass-bottle organs and every drum in the percussion section. In a sense, he’s playing with dozens of robot replicas of himself.
“It’s not samples, it’s not looping — it’s something else. This is me playing with dozens of me in real time, and that’s a new thing,” Metheny told Wired.com during an interview in the large rehearsal space his robots require, a desanctified church in Greenpoint, Brooklyn.

Metheny composed the parts for each instrument by using his specialty — the guitar — as a MIDI instrument, taking control of various robots with the guitar and having them play certain rhythms or melodies.
The recorded version of Orchestrion, available on CD or MP3, is enjoyable in its own right. But the effect is even more impressive in person, because you hear the sound coming from each instrument, rather than through speakers.
Not only does the visual spectacle of robots playing along with Metheny’s always-impressive guitar work hypnotize the viewer, but it sounds great for the same reason live orchestras sound so much better than CDs: They’re essentially 100-point surround sound speaker systems housed in a massive acoustic space with its own resonances, and no home theater (well, no home theater without robot or human performers) can duplicate that sound.

We’ve seen Metheny and his robot orchestra in action, and wager it’s worth checking out. (Catch Metheny on tour or see for yourself in the video above.)
These musicians may be machines, but their performance varies significantly each time. “Even if you wanted it to be exactly the same every time, it’s not,” said Metheny, adding that subtle variations are caused by the robots’ mechanics, timing and the room in which the machines are playing — and that he can toggle musical parts between the players to switch things up.
Most of these tireless robots, out of which Metheny coaxes a human/machine hybrid of warm analog sound, are the custom-made work of robot musician creator Eric Singer and his organization, the League of Electronic Musical Urban Robots, aka Lemur. Metheny tracked down Singer online when he first decided to embark on the project. (Lemur is available for other musicians wanting to try their style of music using its robot orchestra; Metheny’s mechanized orchestra also incorporates a glass-bottle organ robot from another inventor.)
Singer, no small luminary in the small field of robot music, took time off from creating Metheny’s orchestra to participate in the Guthman Music Robot Competition at Georgia Tech last spring. He and Lemur created about 40 instruments total for Metheny, including a new edition of the trademark guitar-bot.
Some of these machines have as many as 50 solenoid beaters on them, similar to the solenoids found in washing machines but engineered to be quieter. Each instrument contains a processor that routes standard MIDI notes to the notes on the robot’s instrument, so musicians and composers can control the robots with any standard music software — Ableton Live, Apple’s Logic Studio or whatever they’re used to using.
Rather than having musical robot inventors custom-build him an orchestra from scratch, why didn’t Metheny just use samples like everyone else? One good reason is that this process has far different sonic, compositional and performance implications, for reasons mentioned above. But to Singer, electronic samples are just as bizarre an approach to making music as his robots likely appear to people accustomed to samplers and keyboards.
“People will say, ‘Well, why not just use samples?’ and I say, ‘Why not just use robots?’” said Singer. “If robots had come first, and then you came out with a sampler, people would ask, ‘Why are you using a sampler when you could use the actual robots?’”
Photo of Pat Metheny: Eliot Van Buskirk/Wired.com
Publicado por Miguel Copon en 10:53 PM