Scalloped fretboards are not new to string instruments. Many lutes have scalloped fretboards, some of purely ornamental nature. However, scalloping a fretboard on a guitar in order to facilitate note bending is a relatively new phenomenon. There are three main schools of the instrument.
The first school is made up of players who have had their fretboards scalloped in order to play Indian music. This school uses the South Indian vina method of bending notes: the strings are pulled across the frets in order to raise the pitch. Jazz guitarist John McLaughlin did some great work on the scalloped fretboard guitar (built by Abe Wechter) for a brief but very rich period of his career while he was playing with the group Shakti, which included South Indian violinist L. Shankar, North Indian tabla master Zakir Hussain, and South Indian percussion master T.H. (Vikku) Vinayakram.


Matthew Montfort, guitarist and leader of the world fusion music group Ancient Future, has devoted himself to the scalloped fretboard guitar since 1978. Montfort spent months in intensive study with vina master K.S. Subramanian in order to fully apply the South Indian gamaka (note-bending) techniques to the guitar. Montfort's transcription of South Indian vina music is available for those who wish to study these note-bending techniques, as is a transcription of his composition in Rag Alhaiya Bilawal for those who wish to apply aspects of North Indian music to guitar.

The second school has its origins in Vietnam. The fretboard of a guitar is very heavily scalloped, and the strings are kept quite loose. Often only five of the strings are used. They are pushed in between the frets towards the fretboard in order to raise the pitch. This facilitates using a guitar to play Vietnamese music, but does not allow standard chords to be played.

The third school is made up of players who feel that a scalloped fretboard provides a sweeter sound and reduced friction which allows for greater speed and better vibrato. Yngwie Malmsteen is an example of a player from this school. Fender has even released a special scalloped fretboard version of the Stratocaster in his honor. 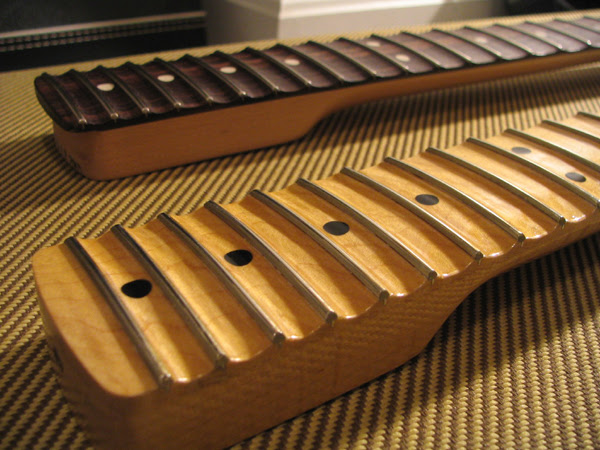