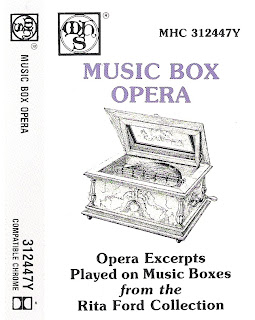 released on cassette in 1989

I found this tape with Mechanical Opera on one of my shopping trips, therefore making this a companion to the prior post. This will be the last "music box" post here for some time.

From the liner notes:

A native of northeastern Italy, Rita Ford came to the United States when she was six. She spent her childhood and young womanhood on Fisher's Island, New York and in Hartford, Connecticut. She was graduated as a registered nurse when she was 19 and worked in that capacity, as well as that of social worker, for a number of years in Hartford. When she moved to New York upon her marriage in the 1930s, she started to visit antique galleries and shops and to collect in a small way. It was when her husband became incapacitated that she turned to the antique field professionally. Occasionally, when purchasing a group of antique items, a music box would come her way. She gradually developed such an interest in them that about 30 years ago she decided to specialize exclusively in the purchase, sale, and repair of music boxes, and now owns the only such all-music box shop in the country (in New York City).

3.  The Barber of Seville: Overture  {3:45}
composed by Gioacchino Rossini