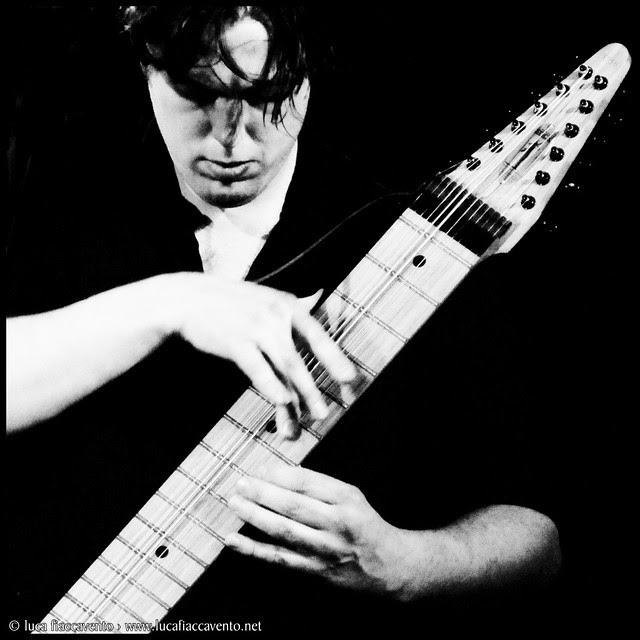 Michael Bernier is a bassist and Chapman Stick player from New York. On his 2011 album Leviathan, he also performed violin, drums, and vocals. The album  features Pat Mastelotto on drums, Kandy Harris on vocals, Caryn Fitzgibbon on violin, and Mike Schirmer on piano and bass clarinet. The music is influenced by 1980s King Crimson but adopts a hard rock approach with jazz tendencies and occasional atmospheric passages.

What do you remember of your first guitar?

The first guitar I actually began forming ideas on was an old acoustic 6 string that only had 4 strings. It was my father's old one and I found it in the attic crawlspace in our home. Due to the intense heat in that area of the house the guitar had become quite warped and devoid of any proper tuning capabilities. However, it was the only guitar I had access to, so I began fiddling with it. Building melodies based on its arbitrary tuning. After some time I saved enough money to buy a cheap knock off of a Fender Strat.

I dream the same way anyone else does. Dreams are subjective. My approach and intention with music is to create a sonic landscape that my subjectivity evokes.

My very first instrument was violin. I found it very frustrating at the age of 11. My hands were clumsy and I had no discipline. I had no motivation or associative anchor I could connect with on violin at the time. Guitar was very present in the music I was listening to at that age, so I became more interested in that as an option. The guitar has frets. Relative to the violin, it seemed less likely I would hit a flat or sharp note. Safer. Sort of like moving from trombone to harmonica.

I can't say that I have felt pride at any point as much as a sense of fruition and satisfaction from playing solo or with groups. If I ever find myself feeling anything close to pride, it's usually only about making myself try different things…pushing myself out of a comfort zone.

What's the role of technique in art, in your opinion?

Technique, for me, is an artist's fingerprint. A distinct voice. However I try not to maintain the same technique for too long. The artists I enjoy are ever changing. I can always detect who they are based on their technique and vocabulary…but I always look forward to their dialect expanding and changing.

The player, the listener and about $3000

The ability to evoke something in the listener

Talk me about Stick guitar

The Chapman Stick is what put my name on the "Prog map" but for me it's simply a convenient way to approach music using the skills I have on drums, bass, piano, cello and guitar all at once. I'm still stunned that the Stick hasn't become much more popular. It is a brilliant concept that has been bastardized several times over. The newer contrived instruments intrigue me but I am quite comfortable on the Stick. I continue to discover new things I can achieve with it's original sound and layout every day.

Marco Minnemann. Aside from his great energy and talent…he is a very conversational player. I imagine he and I could generate some very interesting things.

Frank Zappa. As I mentioned I like being challenged and shoved out of my comfort zone.

My latest project is finishing my third solo album after "Leviathan" and "Veil". The hope is to establish a band to convey all of the material from all three albums once it is released.