The dramatist, novelist and poet, Amiri Baraka is one of the most respected and widely published African-American writers. With the beginning of Black Civil Rights Movements during the sixties, Baraka explored the anger of African-Americans and used his writings as a weapon against racism. Also, he advocated scientific socialism with his revolutionary inclined poems and aimed at creating aesthetic through them.

Amiri Baraka’s writing career spans over nearly fifty years and has mostly focused on the subjects of Black Liberation and White Racism. Today, a number of well known poems, short stories, plays and commentaries on society, music and literature are associated with his name. A few of the famous ones include, ‘The Music: Reflection on Jazz and Blues’, ‘The Book of Monk’ and ‘New Music, New Poetry’ among others.

The literary world respects the playwright and poet, Amiri Baraka as one of the revolutionary provocateurs of African-American poetry. He is counted among the few influential political activists who have spent most of their life time fighting for the rights of African-Americans.

According to the famous American biographer and literary critic, Arnold Rampersad,"Baraka . . . . stands with Wheatley, , Dunbar ,Wright ,Douglass, Hughes, Ellison and Hurston,  as one of the eight figures (in my opinion) who have significantly affected the course of African-American literary culture. His change of heart and head is testimony to his energy, honesty, and relentless search for meaning."


Influential and controversial writer dies at 79 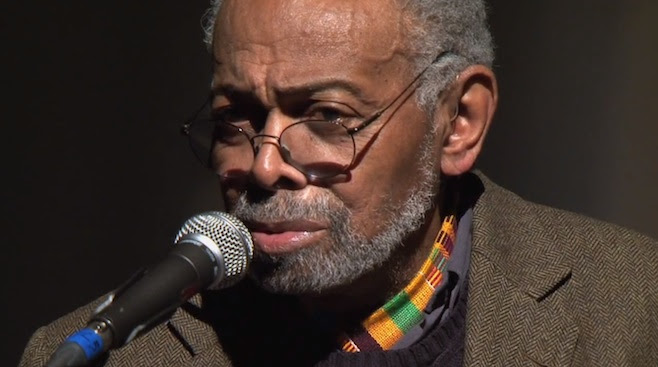 Amiri Baraka, the provocative writer, critic, activist, professor, and former poet laureate of New Jersey, has died, the Los Angeles Times reports. In late December, he was hospitalized due to an undisclosed illness. He was 79.

Baraka was born Everett LeRoi Jones in 1934 in Newark, New Jersey. (In the mid-60s, he changed his name to Imamu Amiri Baraka.) He was a poet, playwright, and author who wrote essays, fiction, and criticism. He authored several nonfiction works about music, including Blues People: Negro Music in White America (in 1963), Black Music (in 1968), The Music: Reflections on Jazz and Blues (1987), and Digging: The Afro-American Soul of American Classical Music (2009).

In addition to writing, Baraka also recorded music. In 1972, he released the album It's Nation Time - African Visionary Music; "Who Will Survive America" from that LP is below. In 1996, he collaborated with DJ Spooky on the Red Hot compilation Offbeat, which also featured My Bloody Valentine, David Byrne, and Tortoise.

Throughout his career, Baraka's militant writing style spurred controversy. His poem "Somebody Blew Up America", written as a response to the September 11 attacks, prompted New Jersey legislators to vote to repeal the poet laureate position altogether. 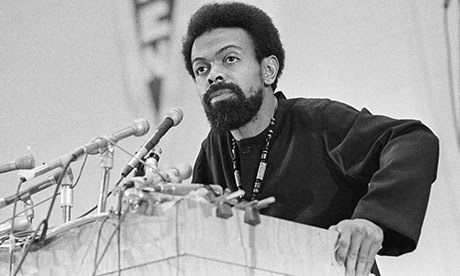 Amiri Baraka was described by the FBI as 'the person who will probably emerge as the leader of the pan-African movement in the United States'. Photograph: Julian C. Wilson/AP

Amiri Baraka, the radical man of letters whose poems, plays and criticism made him a provocative and groundbreaking force in American culture, has died aged 79.

Baraka, who had been in hospital since last month, died on Thursday at Newark Beth Israel Medical Centre, said his agent Celeste Bateman.
Perhaps no writer of the 1960s and 1970s was more radical or polarising than the man formerly known as LeRoi Jones and no one did more to extend the political debates of the civil rights era to the world of the arts.
He inspired a generation of poets, playwrights and musicians and his immersion in spoken word traditions and raw street language anticipated rap, hip-hop and slam poetry. The FBI feared him to the point of flattery, identifying Baraka as "the person who will probably emerge as the leader of the pan-African movement in the United States."

Baraka transformed first to join the Beat caravan of Allen Ginsberg and Jack Kerouac and then to lead the Black Arts Movement, an ally of the Black Power movement, that rejected the liberal optimism of the early 1960s and intensified a divide over how and whether the black artist should take on social issues. Scorning art for art's sake and the pursuit of racial unity, Barak was part of a philosophy that called for the teaching of black art and history and producing works that bluntly called for revolution.
"We want poems that kill,'" Baraka wrote in his landmark Black Art manifesto published in 1965, the year he helped found the Black Arts Movement. "Assassin poems. Poems that shoot guns/ Poems that wrestle cops into alleys/ and take their weapons leaving them dead/ with tongues pulled out and sent to Ireland."
He was as eclectic as he was prolific. His influences ranged from Ray Bradbury and Mao Zedong to Ginsberg and John Coltrane. Baraka wrote poems, short stories, novels, essays, plays, musical and cultural criticism and jazz operas.

His 1963 book, Blues People: Negro Music in White America, has been called the first major history of black music to be written by an African-American. A line from his poem Black People! – "Up against the wall mother fucker" – became a counterculture slogan for everyone from student protesters to the rock band Jefferson Airplane. A 2002 poem he wrote alleging that some Israelis had advance knowledge of the September 11 attacks led to widespread outrage.
Decades earlier, Baraka had declared himself a black nationalist out to "break the deathly grip of the White Eyes," then a Marxist-Leninist out to destroy imperialists of all colours. No matter his name or ideology, he was committed to "struggle, change, struggle, unity, change, movement."

"All of the oaths I swore were sincere reflections of what I felt – what I thought I knew and understood," he wrote in a 1990 essay. "But those beliefs change, and the work shows this, too."
He was denounced by critics as buffoonish, homophobic, antisemitic, a demagogue. He was called by others a genius, a prophet, the Malcolm X of literature. Eldridge Cleaver hailed him as the bard of the "funky facts." Ishmael Reed credited the Black Arts Movement for encouraging artists of all backgrounds and enabling the rise of multiculturalism. The scholar Arnold Rampersad placed him alongside Frederick Douglass and Richard Wright in the pantheon of black cultural influences.

First published in the 1950s, Baraka crashed the literary party in 1964, at the Cherry Lane Theater in Greenwich Village, when Dutchman opened and made instant history at the height of the civil rights movement. Baraka's play was a one-act showdown between a middle class black man, Clay, and a sexually daring white woman, Lula, ending in a brawl of murderous taunts and confessions.
Baraka was born Everett LeRoy Jones, in 1934, a postal worker's son who grew up in a racially mixed neighbourhood in Newark and remembered his family's passion for songs and storytelling. He showed early talents for sports and music and did well enough in high school to graduate with honours and receive a scholarship from Rutgers University.

Feeling out of place at Rutgers, he transferred to a leading black college, Howard University. He hated it there ("Howard University shocked me into realising how desperately sick the Negro could be," he later wrote) and joined the Air Force, from which he was later discharged. By 1958, he had settled in Greenwich Village, met Ginsberg, married fellow writer Hettie Cohen and was editing an avant-garde journal, Yugen.
Baraka divorced Cohen in 1965 and a year later married Sylvia Robinson, whose name became Bibi Amina Baraka. He had seven children, two with his first wife and five with his second. A son, Ras Baraka, became a councilman in Newark. A daughter, Shani Baraka, was murdered in 2003.

Baraka taught at Yale University and George Washington University and spent 20 years on the faculty of the State University of New York in Stonybrook. He received numerous grants and prizes, including a Guggenheim fellowship and a poetry award from the National Endowment for the Arts.
Baraka was the subject of a 1983 documentary, In Motion, and holds a minor place in Hollywood history. In Bulworth, Warren Beatty's 1998 satire about a senator's break from the political establishment, Baraka plays a homeless poet who cheers on the title character. "You got to be a spirit," the poet tells him. "You got to sing – don't be no ghost."