Vladislav Makarov born in 1950, lives and works in Smolensk, Russia.

Vladislav Makarov as a musician follows the aesthetic creed of free improvised music. Recently he has developed his own structural method of improvisation.
Since 1979 he is performing as solo cellist-improviser and with various musicians. 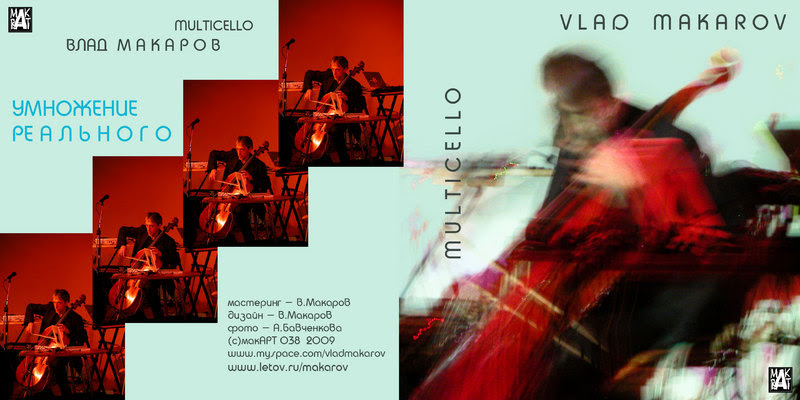 As a painter, Vladislav Makarov is an abstract expressionist, his method of painting is tachism and dripping. The distinguishing features of his works are musicality, spontaneous energy and emotional pressure.

IN SEARCH OF FREEDOM "Golden Years of Soviet New Jazz"

It was time before the Changes and Perestroyka. We could not imagine the change would be coming and what kind of changes they would be. But in our heads they had already come. They expressed themselves in sounds which resulted from new energy and the feeling of Freedom.

At that time I did not realise where my crazy energy of cello cadences was coming from. These sounds broke all conventional barriers. When I listened for the first time Kuryokhin’s piano passages as a machine-gun, I understood — the Truth was here. And I was not alone. Later Kuryokhin wrote me in his letter about the need to put everything upside down: "We must do it. We are not jazzmen, not rockers, and not classical musicians. We play New Music."

This music was born from the spirit of non-conformity, and all of a sudden everybody was playing one's own music. The Ganelin Trio created unique ironic musical theatre. Kuryokhin was bearing the idea of colossal musical battleground. Guyvoronsky/Volkov duo was going deep into esoteric Indian ragas, Ponomareva was letting out her shamanistic intuitions, and Letov and his "Tri-O" were deconstructing pop-jazz stereotypes. Me and my followers — Kondrashkin, Dudkin, Yudenich — were looking for a riskier way, the way of pure freedom, pure music, the art of free improvisation.
At that time I learnt about this concept from the British "Company", from Derek Bailey and Evan Parker and it gave me strength. I realised what my mission was, and although I lost contact with many musicians I was sticking to existential and transcendental principles of my music. I felt the atmosphere of isolation, of being pushed aside, and I have this feeling even now.

In the meantime, the trio Makarov-Konrashkin-Letov, and later Makarov-Dudkin-Yudenich were searching for their own place in new music. We used to travel to Riga where there was real underground atmosphere for this kind of experiment. We met our like-minded collaborator, a brilliant saxophonist Alexander Aksyonov, who created something of a Pop-Mechanics, but totally independently of Kuryokhin. We had a piano player, Oleg Garbarenko, who was even crazier than Kuryokhin. Soon he died and his death could be seen as a bad omen for the future death of Kuryokhin.

Letov and myself took part in the project entitled "Atonal Syndrome". And it was exactly at that time that the legendary group "Zga" was born with me being a kind of their grandfather. Nick Sudnik and Valery Dudkin created post-industrial sound installations and began making their special hand-made instruments to fit their concept. Letov, Aksyenov, Dudkin, Yudenich, myself and some other musicians from Riga often improvised together, and although our was eclectic we had been united by the idea of creating new music. The music of the Ganelin trio, Ponomareva, Vapirov and even Kuryokhin was not sufficiently avant-garde for us. We were acting like guerrillas appearing here and there / Moscow, Leningrad, Kiev, Kharkov, Baltic, Smolensk, Kalinin, Yaroslavl / at official and unofficial stages. Our performances left the audience either puzzled, or enthusiastic, or hostile. Such were the ’80s. Everybody was waiting for changes.

All of a sudden we became mature artists and we were in disagreement. Letov was playing with Kuryokhin and rock musicians / DDT, DK / at the big stages. Because of Pop-Mechanics outrageous performances, Kuryokhin was becoming an anti-pop star; The Ganelin Trio was having a big time around the world. Someone immigrated, someone played pop-music. Music underground of Riga was absorbed in deep occultism. Violinist Valya Goncharova from Tallinn dived into mythology of the ocean. Only in the cold North, the sect of Vladimir Rezitsky were bravely playing avant-garde music camouflaged as jazz, and the weird character Yasha Aizenberg were growing the sprouts of the free jazz in distant Siberia. Makarov was sharpening the edge of his bow searching for the existential profundity of the modernistic paradigms.

The ’90s were coming with its real changes, but that’s another story that is the second act a tragic musical farce.