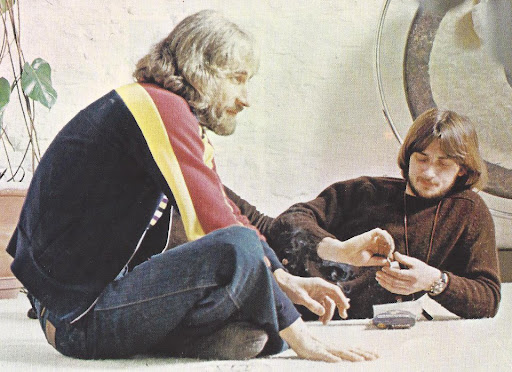 Mike Oldfield and David Bedford looked worried as they started morosely into their glassees of orange juice. It was a measure of their anxiety that, at this stage of the day, when the break came to pop round the corner from Barking Town Hall to the pub for a drink, they had eschewed alcoholic liquor in favour of the fruit of the citrus.

Earlier, we had crowed into the control room of the Manor mobile recording unit to hear the playback of the day's takes, and I could understand their concern, for the Royal Philharmonic Orchestra were just not getting it on.

Of course, it was a mafnificent sound, the 90 musicians working their way throught the themes of 'Tubular Bells'.

David Bedford, who died on October 1 aged 74, was a musical polymath, a composer whose output varied from arranging Mike Oldfield’s Tubular Bells to important Modernist works for the Proms; he also worked with Kevin Ayers’s cult 1960s band The Whole World and produced compositions for community choirs.

Oldfield complained that the cellos, in playing the acoustic guitar beginning of side two, were phrasing it differently.

"That's just the point, Mike", said Bedford. "We can make the cello sound like acoustic guitars and get to play more percussively, but then you might as well use guitars. The whole reason for using a symphony orchestra is to create something new - even to work against the way you did it on the record".

"Yes", replied Mike. "In general I like it. It does sound different, but I like the difference."

Then he asked for a brassier sound on the French horns - cuivre is the technical term - and they tried for another take.

But gloom descended later, with only 1 1/2 hours of recording time left and what looked like a massive editing job on their hands to put together all the good bits and leave out the fluffs and the uninspired playing.

Of course, rock records are made this way all the time, but it seemed, somehow... wrong... to be contemplating a scissors-and-paste job on the efforts of this magnificent machine.

"It happens all the time," said Bedford. "Symphony orchestras rarely record more then five or ten minutes at a time these days."

"It's like a huge monster," said Mike, "lumbering to its feet and getting started. As they play, the spirit gets better, but somehow they sound bored.

"Perhaps it's because I'm bored with 'Tubular Bells'.

I wasn't sure if I had heard aright, and certainly bedford misunderstood what Mike has just said.

"Oh, no, they're not bored with playing it", he said. "It's only the second day they've been workin on it. If they got bored that quickly, imagine how they'd feel the hundredth time they play something by Mozart". 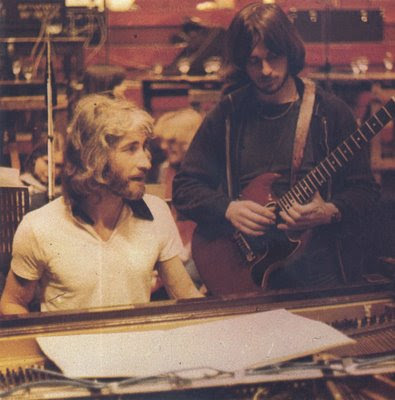 I left them to work into the evening and arranged to meet Mike the next morning to find out how things had gone and talk about things in general.

We began with 'Tubular Bells' and I reminded him that he had said that perhaps he was getting bored with it.

"What do you mean "perhaps"" he said with a laugh. "But just after we went back from the pub I suddenly found myself getting enthusiastic again. I think it was because the orchestra were playing it a lot better. I quite enjoyed it, the rest of the evening. I was really very involved in listening to it. By the end of it we got two very good takes. I was really amazed".

"It still isn't together, by a long chalk, but, I dunno, there was a spirit generated which had been lacking in all the other sessions."

How keen was he on symphonic versions of works that had not been conceived as symphonic?

"Well, if it had been my idea and I'd organised it, I might have been more enthusiastic, but it was out of my hands. It would have happened, anyway. It's an interesting idea".

"It gives a new dimension to the music, quite surprising so".

"There does seem to be a thing... some people, as soon as they hear the sound of an orchestra, they think "Ah, classical music" and turn it, off. I've met quite a few people like that.

"I would have thought people would want to but it, or want to listen to it, at least once".

" I did experience a very wonderful state of mind once. It lasted about ten minutes. Listening a piece of music, Sibelius's Fifth Symphony, the last movement - I think thad a tremendous effect upon me, just that state of mind"

"One part of it, I was in the very sensitive condition, sitting in a room alone, I could really hear just about everything that was going on in that piece of music and a sudden image came, not a visual image, an idea that every instrument was a voice, and there was a creature, some sort of creature, talking. One tune in that, if I could picture the creature that was saying thos words, then it would be a very nice-looking animal. Everything about that particular performance was just very beatuful and everyone was speaking very nicely."

"I can't stand people who play things blandly - you know, just sounds, notes. Somebody has probably invented some kind of categorisation, music that is just blandly played, and any merit in it is just its construction. Are there two words that will describe those two things?".

The subject was not pursued. So, how had 'Tubular Bells' and 'Hergest Ridge' differed?

'Tubular Bells' is appears was conceived largely in an urban environment, and the music reflects this. It is episodic, gritty, unflowing.

"The textures of a lot of rock music", said Mike, "and the textures of a city street, they're really a similar sort of feel. Lots of confusion and lots of nasty overtones: things going bang, crash, car doors, horns. And then there is the general undercurrent: tube trains, buses, cars- the rumble of several millions cars on a street gives the whole of London a big brrrr, incredibly deep, and you can feel it in your rib cage. It might have something to do with whoy people like bass so much. I like bass; it's much nicer form of that rumble".

'Hergest Ridge', on the other hand, is smooth, uncluttered. There are no tube trains, very few car doors, lots of open countryside, smooth hills, a general feeling of smoothness and wellbeing and non-hysteria, just a much nicer environment. In fact, we went to Cornwall, and driving back we were listening to Hergest ridge on the car stereo, and as far as relating the music to the country side- I've only just thought of this approach- It wasn't like Cornwall at all. It was really like Herefordshire".

"It's basically not more than six different tunes and the tunes are related, so the whole thing is related. Also, if you want to get anything out of it, you've got to really listen to it. There's lots of things hidden, things that may seem meaningless, but they do have a meaning, a musical meaning. And just the general txture is so comforting"

I suggested that one of the things the critis found most difficult to accept about 'Hergest Ridge' was this comforting effect, the romanticism of the tunes, in a world where music had to be agonising to be taken seriously.

"Silly boys", he said, half to himself. "The problem of the world today is that there's not enough romance".