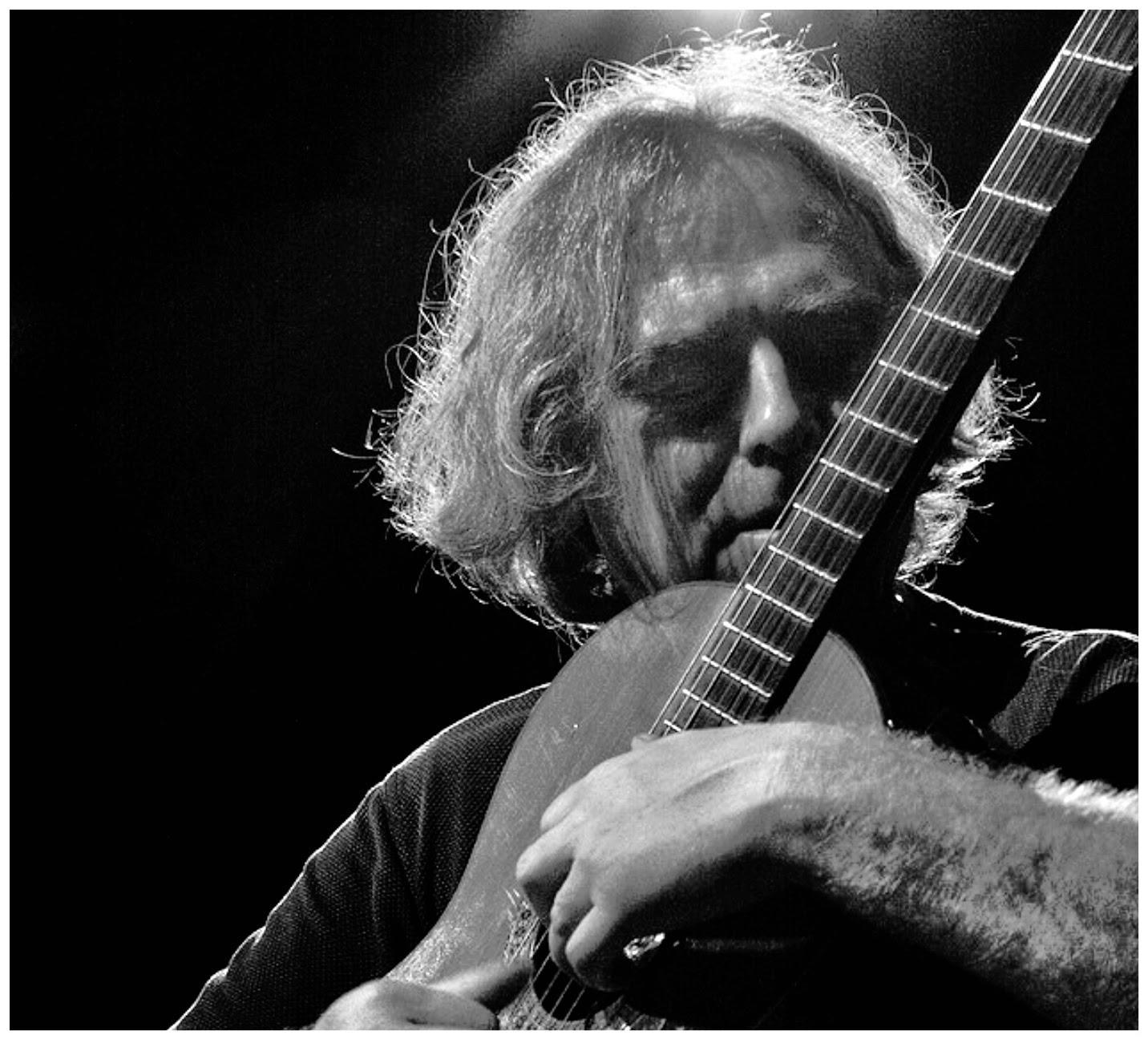 Pascal Marzan is a classically trained musician active in Paris, his home city, both as an improviser and organiser of improvised music events.

After studying classical guitar mainly devoted to the twentieth century repertoire and teaching guitar in several music schools of Budapest in Hungary and France, he is dedicated to free improvisation.
His playing has been influenced by his interest in the folk musics of Eastern Europe, Asia and Africa. His approach to the guitar is characterized by the search for new sounds including three distinct modes of play,  : 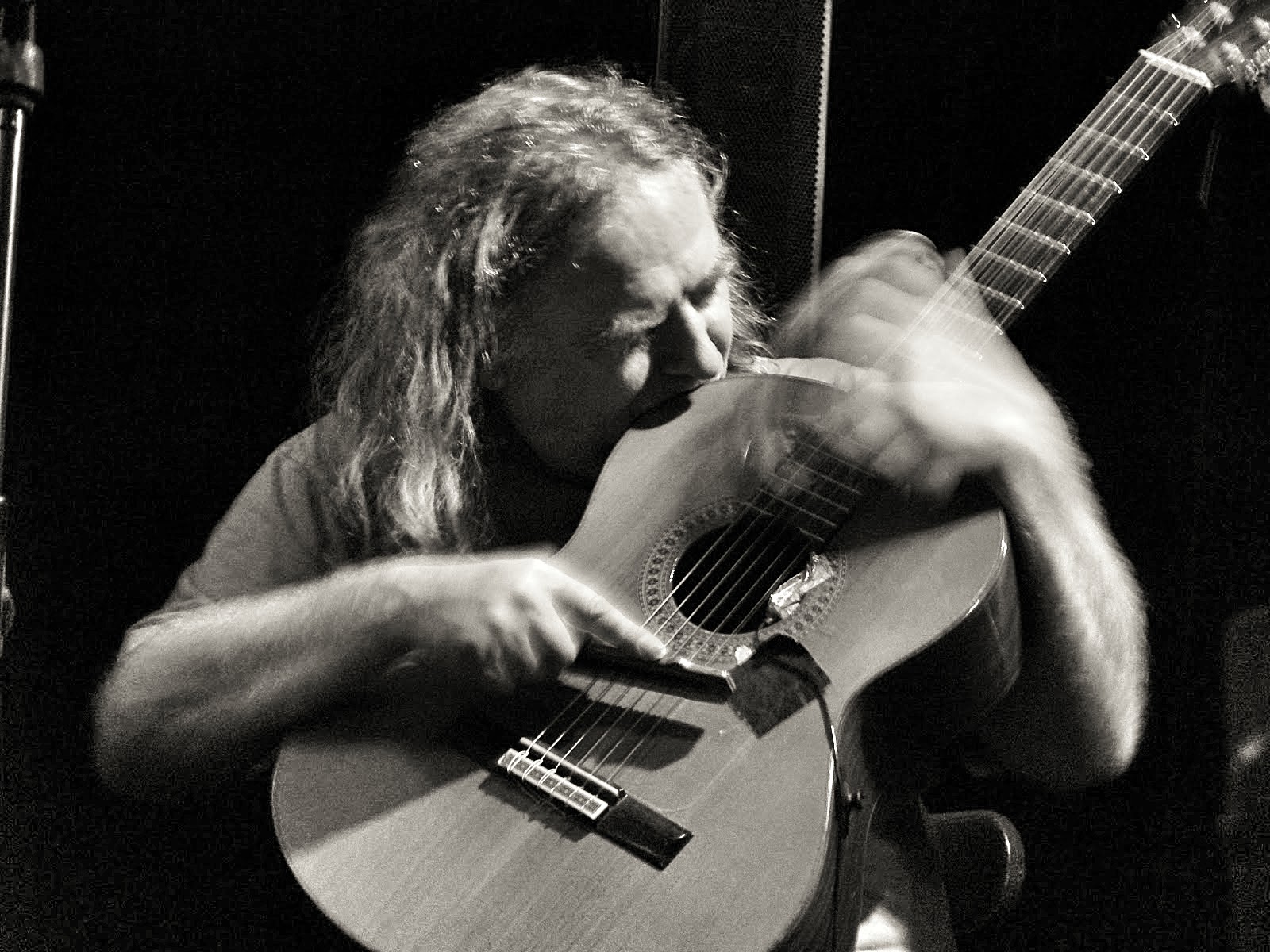 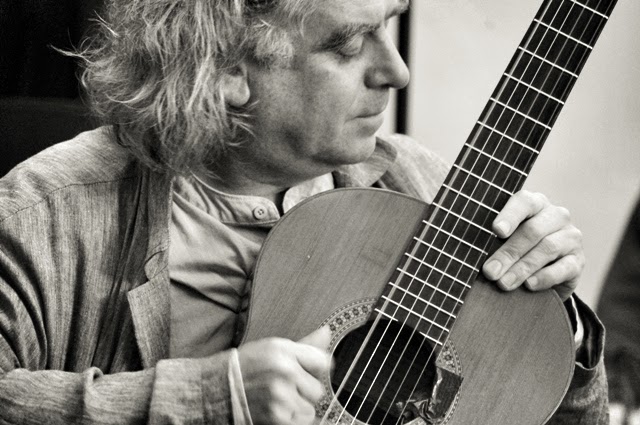 I think I have two very distinct influences.

The first probably in the nature sounds and the sounds of the countryside. I still remember the pounding of the blacksmith, the musical horn of the small truck loaded with treats and basic food that passed once a week and that I watched when I was a kid, the church bell, farm animals, wind...

It's in contact with nature sounds that come my musical ideas, my inspiration. I can easily transform in my head the sound of wind, leaves fluttering, buzzing insects, the sound of the river of the waves in orchestral music.

I don't feel like an urban musician, the sounds of the city does not inspire me so much. 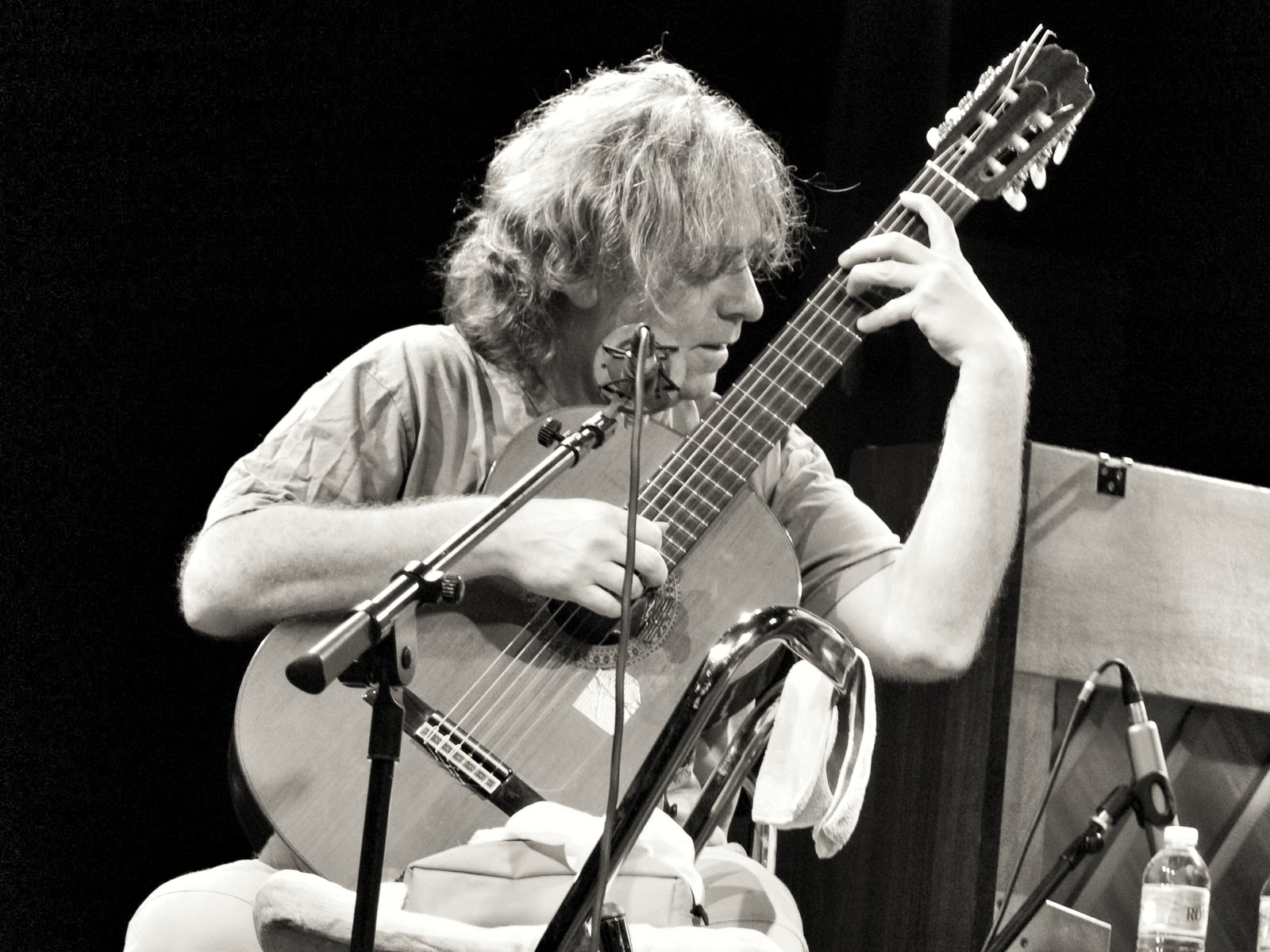 The second influence come from from a box set of records for children telling about the lives of classical musicians with many excerpts from their works. My favorite songs at these times were "Little Night Music" by Mozart and Beethoven piano sonatas. I could listen to them during hours and I can still play them in my head.

Listening to these musicians has moulded in me the desire to be a musician.

Because of these different sounds and music playing together, I felt the need to express myself and play a polyphonic instrument. It could not be an instrument like the violin or wind instrument or percussions.

First I thought playing the piano, but it was too bulky and expensive for my parents.

Multiplicity would define my learning process.

I started studying at the age of 6 music theory at the music school. At that time, the guitar was not taught at the conservatory in the city where I lived: the guitar was not considered a worthy noble instrument to be taught like other instruments of the classical or romantic orchestra in a conservatory in the 70s. Also the guitar teachers were still few in the provinces. So we found a private teacher. Lessons became boring after a time so I tried like most of musicians, to play by ears the music that was on a record


At another friend's place every sunday : Keith Jarrett's day…
My first record was Jimi Hendrix Isle of Wight. I don't remember about my last one. Let's say Joe Maneri's Dahabenzapple. I remember also a cd with percussions from Ghana. In fact I rarely buy cds. I receive and share a lot of cds with friends and from musicians. It's mainly about free improvisation music and contemporary classical music: the music I'm listening now include works by Helmut Lachenmann and Luciano Berio. I love traditional music Dagar brothers, Shakuhachi music ; pygmy chants, flamenco…

First to be Music ! I will add mystery, poetry, imagination, inventiveness. First of all not to be dull and boring, painful for the ears !

I feel very comfortable to play with videos and films, dance and poetry.

Teenager I was curious and interested by film score, and the relationship between images and sounds: I started to improvise on guitar while watching film on a mute TV.

Later while studying the guitar at the conservatoire, as I was training 6-10 hours a day, every day, I used to play in front of a mute TV because it became annoying practicing scales, arpeggios...

Also It was a great experience to play the score by Aleksander Kolkowski for the UK Premiere of The Saragossa Manuscript by Wojciech Has with the Recording Angels Ensemble at the BFI in London.

In Paris at R de choc twice a month I was organizing a “Cine perf”- performances with dancers musicians and two mute films projected at the same times.
I played also with american poet Steve Dalachinsky and with Catherine Karako (poet dancer and video).

Technique is fundamental but is not essential.

Reading the book of Olivier Messiaen Technique of my musical language as well as the first two volumes of his Traité de rythme, de couleur et d’ornithologie convinced me of the need to define its own language and technique. Technique is at the service of music and musical language.

Personally I work all the techniques called peripherals: playing on the strings intertwined with metal objects, cardboards... percussions, cans, scrapers...

I practice exercises for each technique in addition to the traditional playing on the guitar, and flamenco technique. Also part of the time is devoted to the search for new playing modes, techniques.

I am inspired by different techniques used on other stringed instruments as guitar.
I train to respond to any request in improvisation

This way I feel free to improvise from (within) each technique.
I'm very interested and fascinated by the percussive slap technique on guitar but I'm not able to do it. It's quite difficult to slap on a classical spanish guitar with nylon strings but it's in my to do list.

Freedom and Intellectual and artistic honesty. Authenticity and creativity. 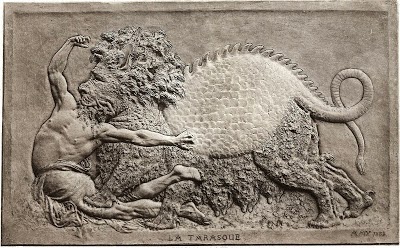 I learn from all the musicians that I see on stage and from all concerts and shows whether good or bad.

I play on a spanish guitar made by Paulino Bernabe. I use a Shure beta 98 electrostatic microphone and a Genelec Monitor or an acoustic ampli Fishman.

When playing solos or different combos with electronics live processing, I use AudioMulch software.

I have many best musical experience ;)

Recordings with Roger Smith, with John Russell and a quartet with Phil Wachsmann, Roger Turner and Teppo Hauta-Aho.

A piece for solo guitar

Solos with or without live processing electronics.

Soundtracks for videos by Catherine Karako... 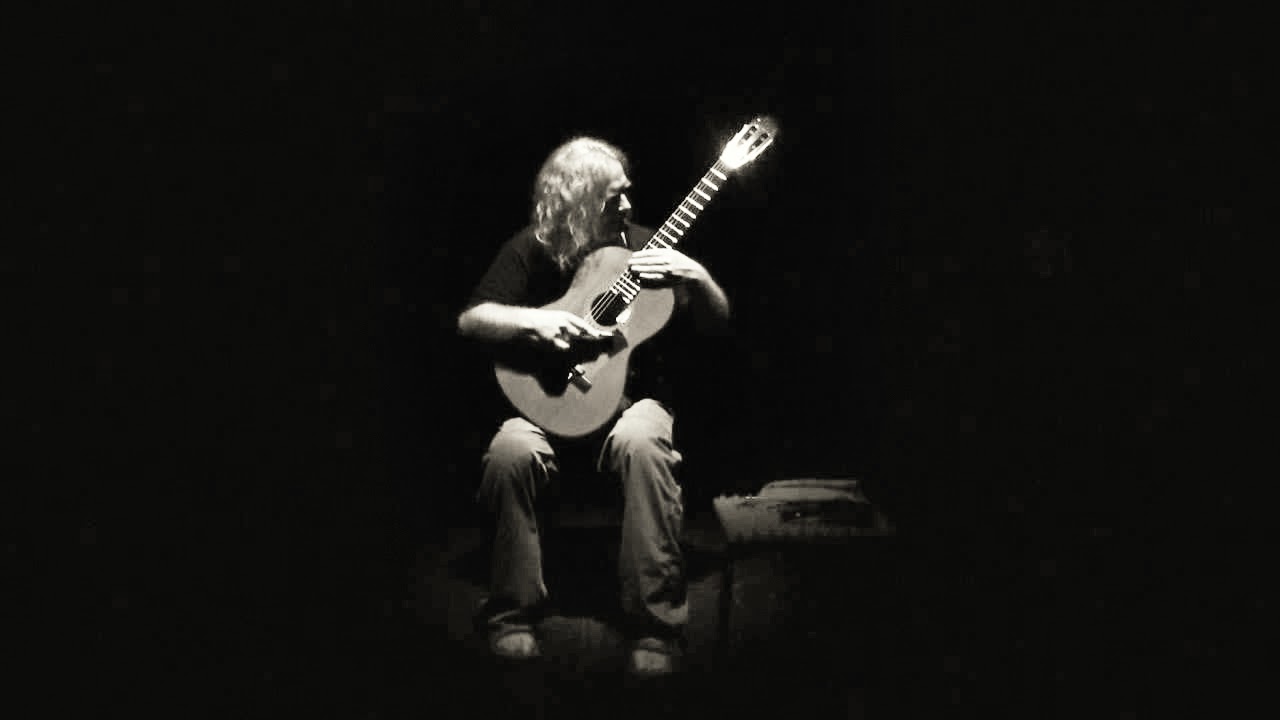