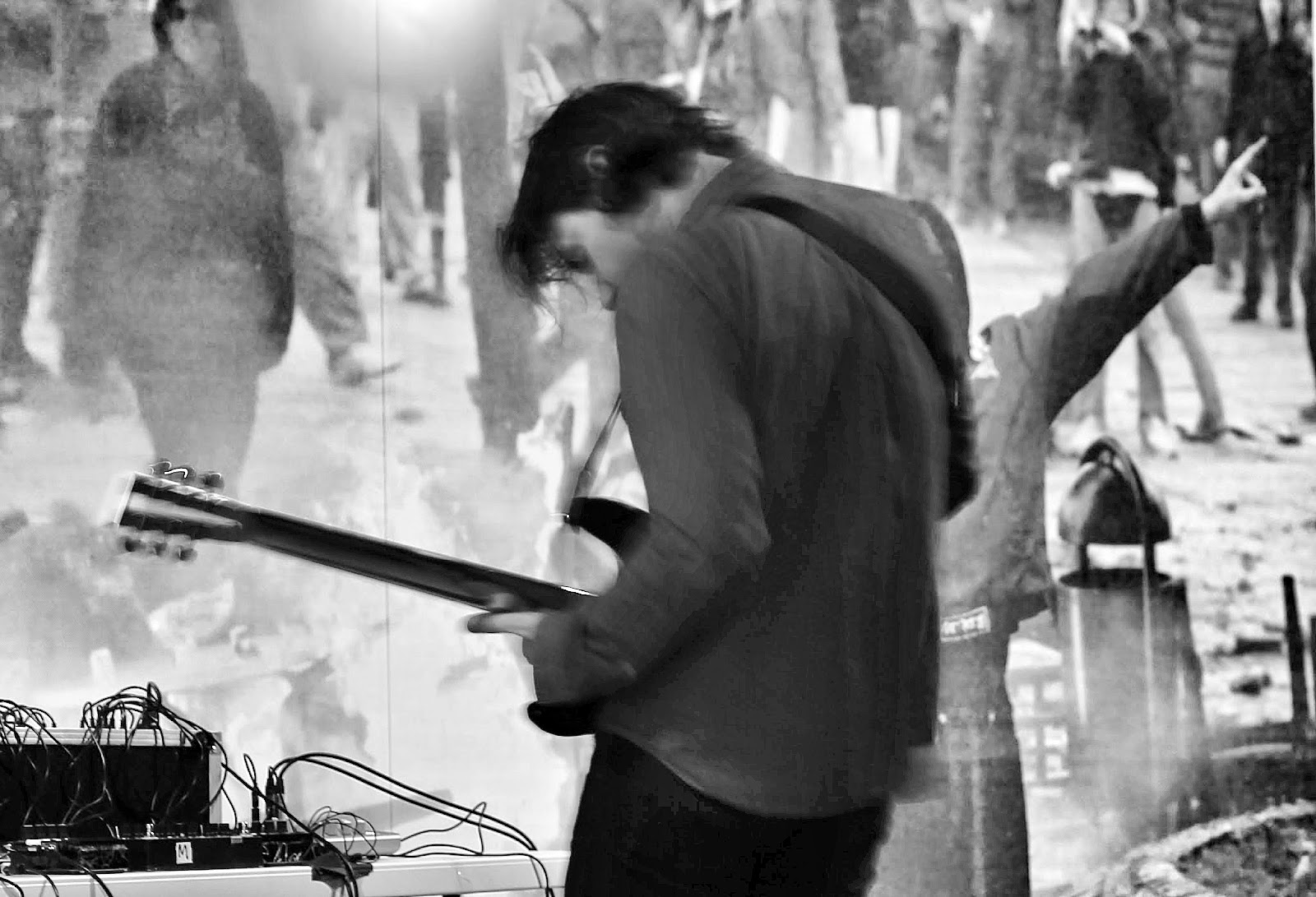 Marco Fusinato, Australia based musician/conceptual artist, was born in 1964 on the same day that Archelaus of Priene completed the Apotheosis of Homer; clutching both Italian and Australian passports he chooses to live at the arse end of the world. He has refined a language of noise-guitar disaster which sounds like Masayuki Takayanagi wrestling David Tudor boxing Sophia Loren kissing the hand of Peter Kropotkin all at once; an amalgam of abstract realism. 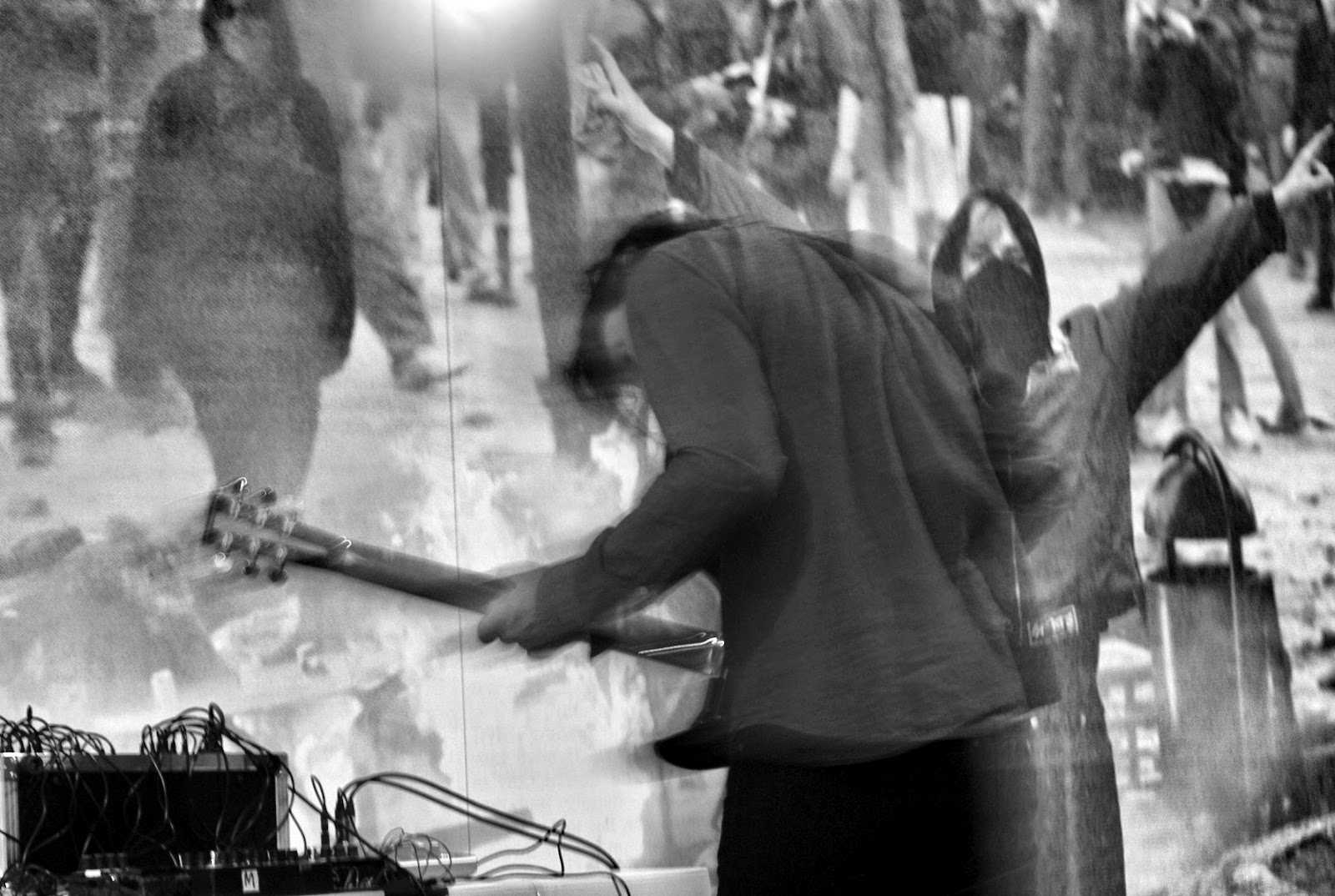 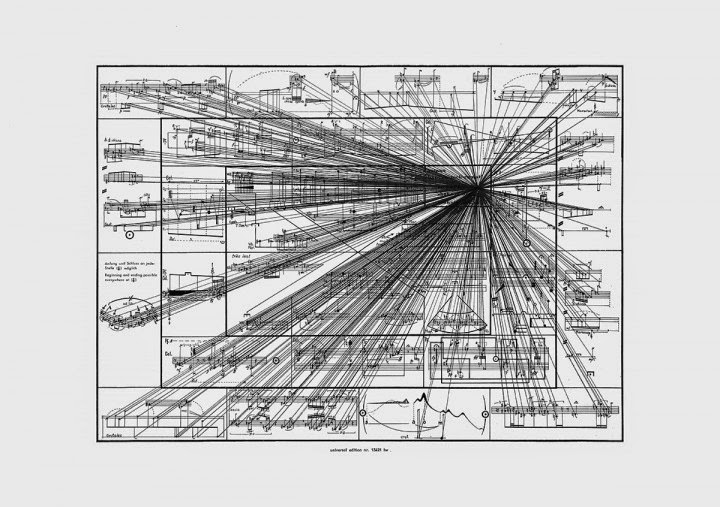 My mother told me that from a very young age I enjoyed listening to the radio at high volume, so for some reason she bought me an acoustic guitar which I would bash away at constantly. She couldn't cope with it, so she would send me to the back of the yard where I would play to the chickens and rabbits. Apparently I would spend hours out there bashing away at the animals. I used that guitar as a chopping block. 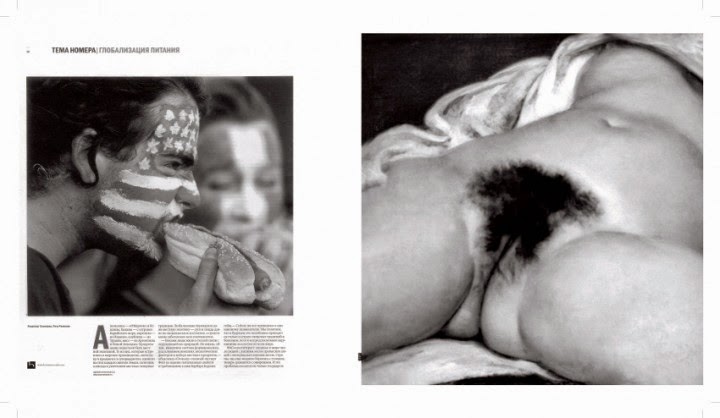 I did use an old Gibson Les Paul Custom for many years but now I'm using an EGC guitar going into a myriad of ever-changing electronics (pedals, synths, amps). I'm fascinated by the guitars iconography and how each model has a particular association to a genre. I'm also aware of how the guitar has become capitals entertainment tool, it sells all types of commodities.
It's a powerful signifier and everyone knows its sound. That's one of the reasons I enjoy trying to make something confounding with it, something that may defy expectation. 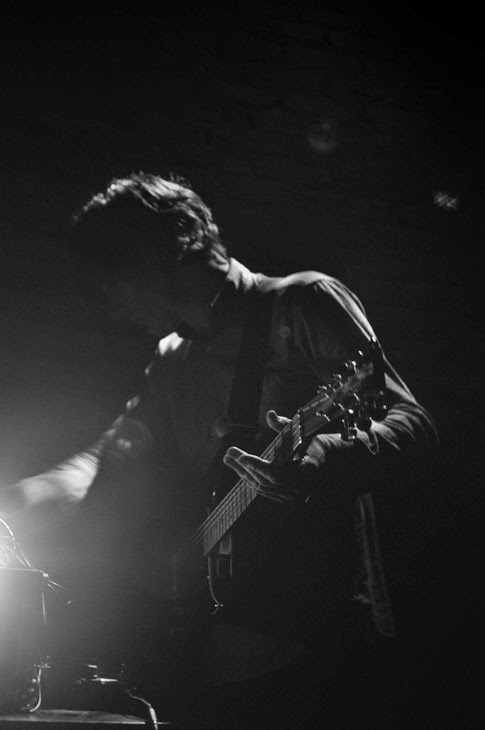 
Can you describe a sound experience that you believe contributed to
your becoming a musician?

The popular music of my youth was a good reason. The fact I despised it so much made me seek alternatives. My complete hatred for it continues to be a source of inspiration. When I hear piped 80's popular music in public spaces it kills me. I find it such an infringement. It's a form of torture that's infiltrated the western world. Everything about it wants me to create the most unsympathetic music possible. 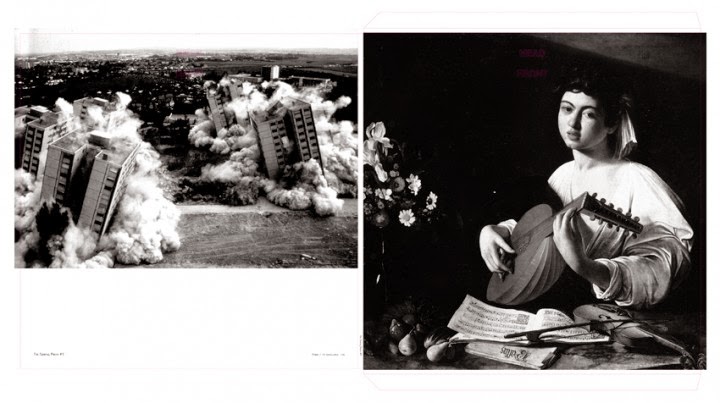 
I remember as a kid going into guitar shops and in the book section seeing 'How to play in the style of…'. I learnt early on that no matter how much I tried I could never do that. I didn't have the ear, the patience, or the technical ability to play like anyone from those books.

I realised that there's no section in the shop of 'How NOT to play in the style of…',  that it's possible to develop your own language by understanding and embracing your limitations. 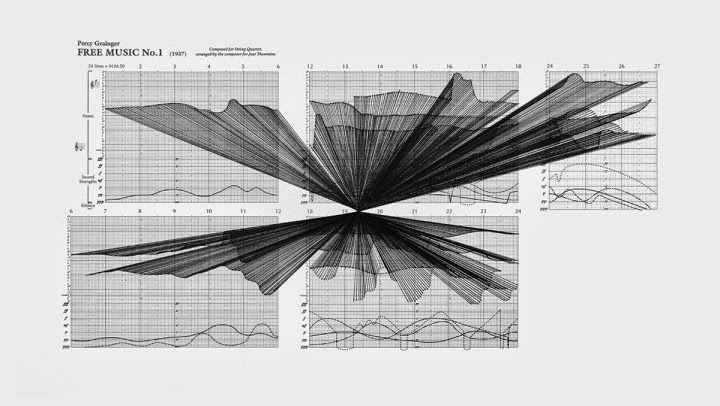 A large part of my guitar playing involves processing the signal, re-routing the electronics and experimenting with patches. I've made hundreds and hundreds of drawings over the years of various ways for the guitar signal to be routed. I tend to never go back and use an old patch. There are so many possibilities, so many options to explore. Each show tends to have a different configuration that will surprise and keep me engaged with the direction I'm forced into. As much as I try to control the moment I find it takes me down unimaginable paths.  It means that some shows are ecstatic whilst others are a complete disaster. 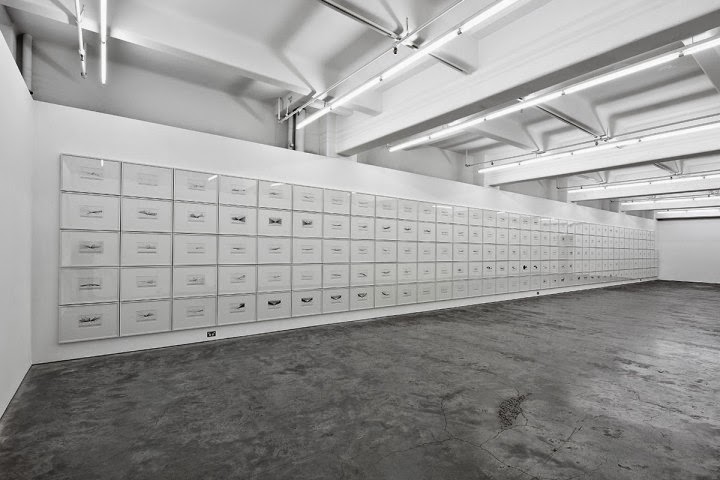 "Get out of here if you want to make that noise".

There's two that are 20 years apart that come to mind.
In the 90's I did a project called FREE. It was a series of improvised noise-guitar actions recorded in unsuspecting music shops around the world. At the time I was travelling a bit for exhibitions, without music equipment. I thought it'd interesting to use the music shop as a readymade studio- since it's full of new gear. This was at a time when the first mini-disc recorders came onto the market and their size, not bigger than a wallet, made it possible to make recordings without cumbersome gear. 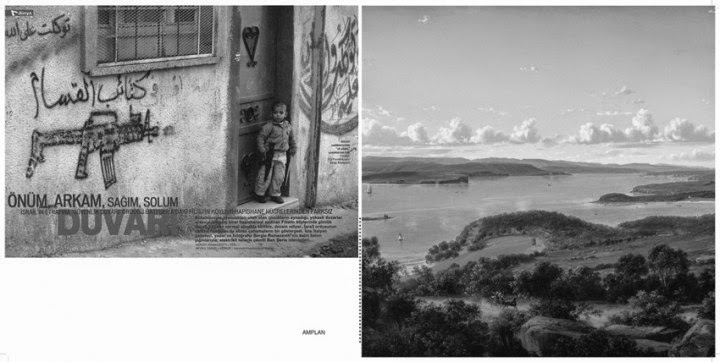 I'd walk into the shop, press record and ask to try a distortion pedal, that way they'd have to give me a guitar and and amp. I'd then proceed to play at high volume until I thought I reached the threshold. I'd then hand the gear back and say 'No, thanks' and quickly get out. When I knew it was safe to do so I'd take a photo of the shop front. Each time I'd have to work myself up into a state because I didn't know what I would encounter. One of the actions was documented on a hidden video camera. The earlier recordings were released as 7inch records. I ended up exhibiting the series more than a decade later as photographic and video documentation. 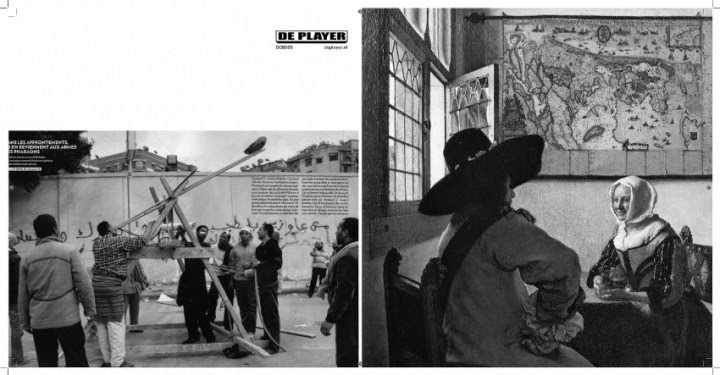 
The other one, Spectral Arrows is an ongoing series of long duration performances for guitar and electronics. It's an all day improvisation beginning when the venue opens opens for business. I set my gear up facing the wall- with my back to audience and proceed to play for the whole day until the end of business hours. It's a relentless barrage.The intention is to create monumental aural sculptures that fill thespace obviously not with solid matter, but with vibrations travelling through air. 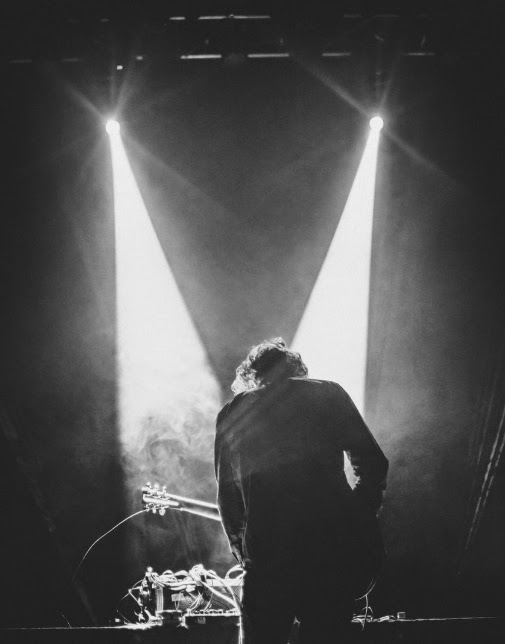 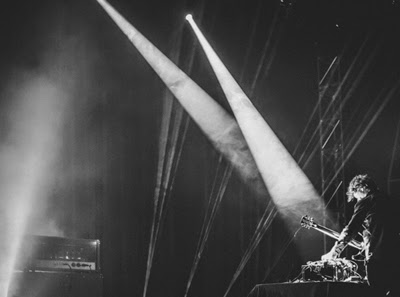 I don't think there is. It's dependent on it's acceptance within the genre. 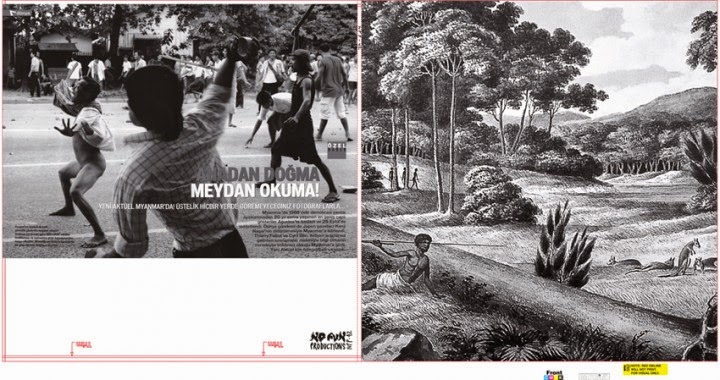 
Which was the first and the last record you bought with your own
money?

The first was The Clash, Give'em Enough Rope. On cassette. The latest was a huge haul of LP's of experimental music and anarcho-punk from a trip to Tokyo. 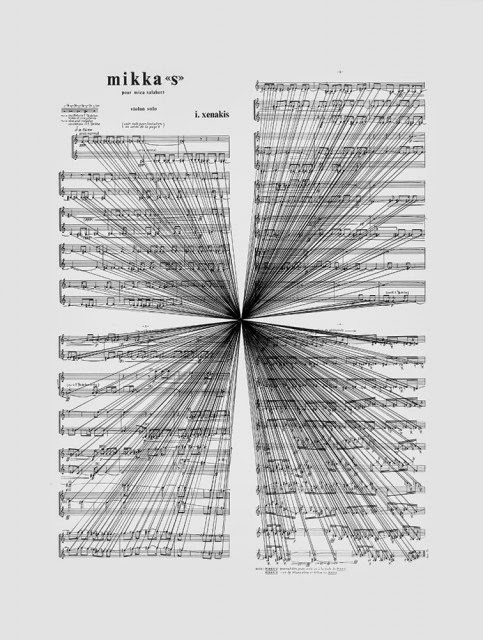 I work across various disciplines. Some of the projects in gallery and museum contexts reference my interest in noise as music.

For example, the series Aetheric Plexus takes the equipment associated with spectacle (the rigging, lighting, speakers and other stage apparatus), usually employed to highlight a performer, and directs it at the gallery audience whose physical movement triggers an intense environment of white light and white noise, one that simultaneously delivers both violent and ecstatic experiences. I'm interested in the critical discourse around the gallery and museum shifting from a place of contemplation to one of entertainment. When activated the blast (up to 30,000+ watts of white light and 105db+ of white noise- for a few seconds) turns the audience into performers as they are forced to deal with the onslaught. 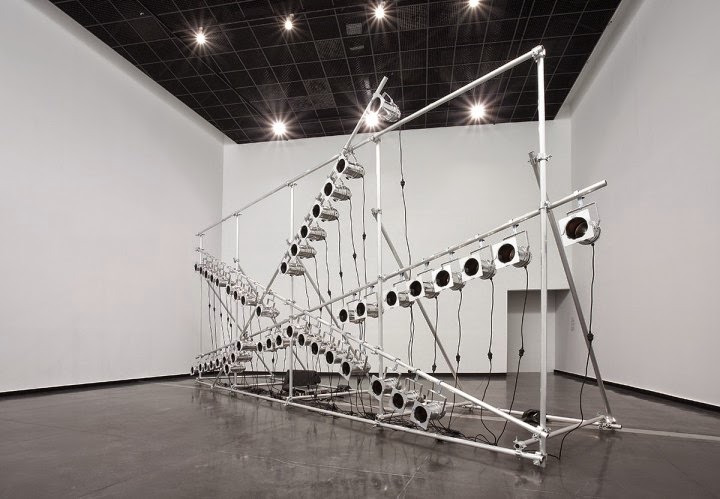 Noise permeates my practice across a number of contexts. As well as engaging with it literally through constant performances in live music venues, I also explore it metaphorically through a range of projects, for example Mass Black Implosion. That series takes scores by avant-garde composers as a template. I then choose an arbitrary point on the score and rule a line from every original note back to this point. Once finished each score represents a proposition for a new composition, in which every note is played at once, as a moment of singular impact. 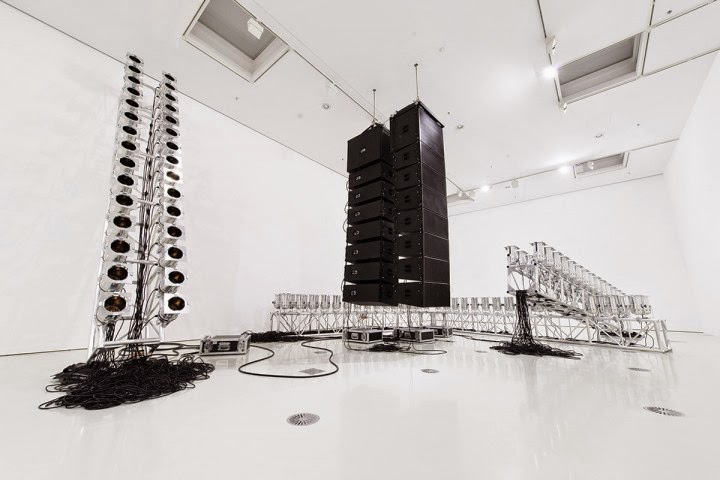 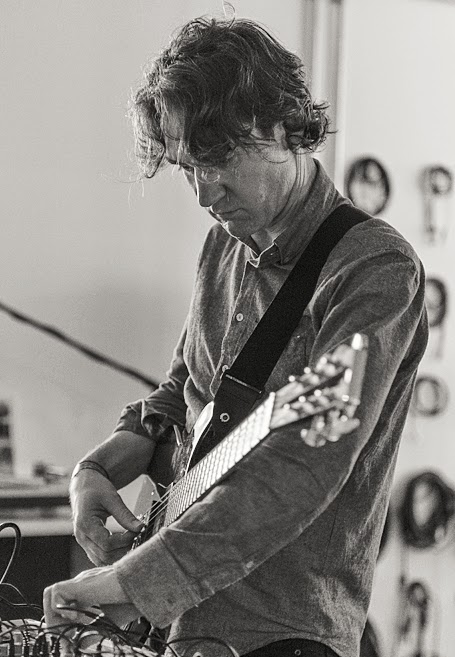