CHET BAKER (Because of Philip Catherine...) 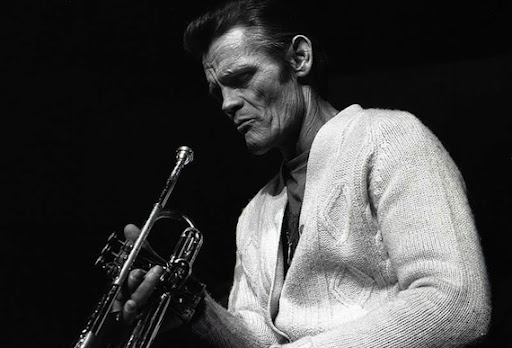 It somehow took me quite a while to figure out how important was that historical trumpet player right next to my forever idol, at the time, the belgium guitarist Philip Catherine. In fact I still had mostly his earlier albums with orchestra singing, or some cross over recorded a decade before for CTI label. It was slightly difficult to connect with the tiny fragile middle-aged man he now was. Chet looked like one of those sailors you find in ports and dressed the same in fact. Someone who had been around the world so many times that he didn't remember himself anymore probably. Someone physically exhausted by a hard life, with scarfs and bongs everywhere. Someone who survived the James Dean Calendar state of life, when most didn't (people like to talk about Jim Morisson's Last Days in Paris, but no one wants to watch the pictures we have of a totally boomed and destroyed Morrison). As far as I remember Chet always lived at present and towards the end even in some sort of possible short future (say a week or so ahead?).

I met Philip Catherine when I was 13 in Nice (French Riviera), during a Guitar Masterclass that also had Philippe Petit who would become my regular teacher right after. I Immediately felt telepathy with Philip, its hard to explain. He was all I wanted to be, wanted to play, behave (for what I could see with this age, I later realised things were for him obviously more difficult too). I had simple questions like – can you make it as a jazz guitarist being french (of course Django and many others but as often with younger age you're more focused on your present times, past can maximum mean 10 years before and you can't clearly remember it even). Philip was hip, was big, played with great names, played big theatres (also very soon to change back to tiny clubs), was in magazines, played in the U.S. All this was like stairways to heaven for me with 13.

But more over, he played everything I dreamed to play If I hadn't heard him before. His lyricism, his Virtuosity but never falling on the un-tasty side of it like many would, his choice of notes, his vibrato, his chord voicing, his comping, even his guitar, his pedals, his Boss Pedal Board, I bought all. All his albums I could find, I started to print photos of him and study his technique, I changed my Wooden Bridge on my ES-175 to get a Tune-o-matic like him, and even tried X-tra Light d'Addario 0.09 Set of Strings and those Pink Dunlop Derlin Turtle X-Light Picks. I took the same incredible Boss CS-3 Compressor that strikes each note like none else, his Boss Octaver OC-2 (the same one Bill Frisell actually used with Paul Motian at the time, incredibly examplified in their ECM album “It Should've Happened a Long Time Ago”, where Bill plays whole tunes with the Octaver On), his DD Boss Delay for long sustained strummings at the end or in intros. I mean all, really all of it. And then I followed them everywhere.

The Trio Was Chet, Philip on guitar and Jean-Louis Rassinfosse on Electric Double-Bass (without Body, very similiar to what Eberhard Weber played). That would happen in festivals mostly, on a club and daily basis Chet seemed to have other contingences to deal with than strictly music and groups often turned into some jamming open bands where who had a good reason to be there (dope being one, I noticed even I was young and had no idea what dope did). Often would be the Jacques Pelzer, George Brown on drums (the George Brown on Wes Montgomery's Portrait of Wes album, that lived in Paris since), Nicola Stilo (on flute, nylon strings guitar and dope, he had the trumpet too), often would hang around Michel Grailler and the late Micheline Pelzer, sometime the bass would be Riccardo del Fra, Hein Van de Geyn, more rarely Alby Cullaz.

If you ask musicians who were active in those 80's days, everyone has a story with Chet, but also everyone at least replaced once in one of those open bands, sometime very average musicians even would sit in, which would provoke Chet to be grumpy and start to mumble in between tunes (I don't want, they can't play, etc... there is an “on the fly” albums, maybe two even, sold at the time as “Archie Shepp & Chet Baker”, http://www.discogs.com/Archie-Shepp-Chet-Baker-Quintet-In-Memory-Of/release/1809221 where you can hear him stopping a tune with ... I don't want, they don't know).


I think its fair to say that for Philip playing with Chet has been a string turning point in his career. By the the time Philip suffered serious insomnia, and he would travel with a plastic bag (sometime a garbage bag even, just cause they were larger and I guess more solid), full of Live tapes from their shows with Chet. He knew thos tapes by heart, he had marked all sorts of timing on them, and I would end up in his room after the show and he would play me those absolutely incredible Chet solos from the previous months and weeks. I particularly rememeber one tape (can't say where it was but like 1983 or 84, before 85 for sure), where we couldn't figure out where did he breath. It was like three minutes long phrase never ending, rebirthing from itself constantly.

I remember so many things that I can't verbalise too. Like going to hear them (that was the other trio with Riccardo and Mickey on piano) where the club was so small that there was a strong angle in that cave and that if you didn't pass the bar and this angle you could hear them but but not see them, and it was packed like an egg that evening.

So i closed my eyes and just listened, Chet would often sing and improvise (scat you could say though it wasn't scat but playing with his voice), and I remember very well being so into it that at some point I couldn't tell anymore if he was actually playing or singing those notes, so close the two sounds were through this basic SM Microphone in this tiny club with a pretty bad PA. I remember Japanese young ladies standing up suddenly when he started to sing Just Friends and deposing down his feet a beautiful and huge bouquet of flowers in silence and admiration.


I remember him getting really angry and asking a guy to leave immediately the table because he had said “bitch” about a woman in front of all. I remember him never praising dope ever, nor did I ever heard him saying anything positive about drugs but absolutely the opposite (same did Burroughs, same did many who were hooked to this shit).

I remember him wearing totally worned out tee-shirts from festivals, but always from some pretty late years already. I remember him driving a Salmon-Pink Alfa Romeo to Amsterdam overnight and back to Paris the next day, then play the evening. Sometime don't play, arrive around 23h at the club totally stoned, started one tune which went totally wrong and cancel the whole show. Every one has many many Chet Stories I guess.


After he moved back to California and got involved in some really bad dope affairs and lost his teeth from in a rixe, few people cared for him. He always said Dizzy never ever let him down. The only thing he never lost and always carried with him was this new mouthpiece given by Dizzy to learn again his embouchure with false teeth.

I don't remember him having his own trumpet even in fact. Nicola Stilo carried one always for him, which seemed like a basic student Yamaha one, but because he was the dealer, and made himself to be in the band that way I guess. I remember fans and amateurs kindly bringing a trumpet at the soundcheck that he tried to do his best with always. Often you wouldn't hear what the quality of the instrument was after couple phrases though.

I remember Chet learning a new song. They played it for him, he agreed on it and then started the process. The band was comping the changes for as long as Chet needed to try the wrong notes, he was going through it hiting all the wrong notes for some time until he got it and said OK, I have it. I rememeber the last years how he was getting to the venue pretty early in the afternoon to play piano with one finger. How every musician in town knew his doors were open to them, and would come at the soundcheck to play with him couple tunes and he would bless them mostly.

I remember an extremely kind and soft man who only got angry because he had to suffer an horrible disease being an addict. I remember Barney Wilen recording with Chet in the french Riviera and the owner of the studio threating them to erase the masters if they didn't buy the tapes quickly now (and did erase them). I remember having probably about two or three hundred hours of live tapes recorded of Chet with Philip and others (and not transferred yet). Some warned out as I learned their solos (like the Vichy Jazz Festival, in trio with Philip and Rassinfosse).


I remember joining them at the break in the dressing room with the door open so that you could see the crowd, which was that evening particularly snobish and arty, and I sat next to Chet, and for some reason he put the palm of his hand on my hand. Then watched at that door outside for about 15 or 20 minutes not saying a word, then came the second set and he just stood up and said : “Blind”.

I will always remember Friday 13th May 1988, when he passed away. I was supposed to join them there and didn't because I started to play myslef and had a good club gig that day. I remember that a year before Jaco Pastorius died and It really touched me deeply, I cried, it felt like Jazz was leaving us soon. When Chet died that was it for me, never the same again after. Some nice moments, some traces still, but jazz wasn't to be the same ever again without him and them.

PS : I'm not nostalgic at all, this was never a question, I expect next (to Philippe Carles, François Jeanneau & René Urtreger).