As a teenager in Chicago Scott Fields played guitar, sang, and wrote songs for rock and blues bands. Early on, however, he became interested in New Music and avant-garde jazz, largely by exposure to musicians who were active in the Association for the Advancement of Creative Music, which was centered in the south-side neighborhood in which Fields was born and raised. At the age of 17 Fields formed the trio Life Rhythms, in which he played guitar, tenor and soprano saxophone, flute, clarinet, and sundry percussion. Two years later the group disbanded. For the next few years Fields freelanced but did not play in any fixed ensembles. Then he stopped performing entirely and moved to Madison, Wisconsin, where he took classes in composition and music theory at the University of Wisconsin and studied classical guitar with George Lindquist and Javier Calderon and jazz guitar with Carl Michel and Roger Brotherhood. 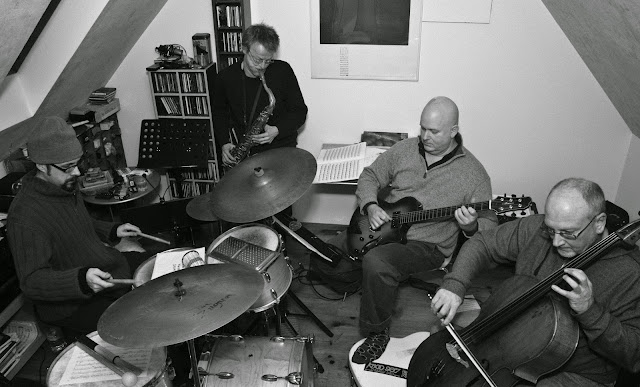 Years later Fields resumed working as a musician full time. Since then, as leader of his own ensembles and as a sideman, Fields has toured throughout North America, Europe, and Asia. He has also released 30 CDs as a leader. In 2004 Fields relocated to Cologne, Germany. Fields focuses on two aspects of music composition and performance. One focus has been creating structures that blur the dichotomy between notated and improvised music.  The other has been developing new total and rhythmic organizations for notated and improvised music. His most frequent settings as a composer and performer include the Scott Fields Feartet (a string quartet in which electric guitar replaces one of the violins), an acoustic guitar duo with Elliott Sharp, a classical guitar and theorbo duo with Stephan Rath, a duo with saxophonist Matthias Schubert, the Scott Fields Freetet, (a free-jazz trio), and the Scott Fields Ensemble (which presents instrumental versions of Samuel Beckett plays). When logistics allow Fields presents his modular compositions with the ad hoc Scott Fields Large Ensemble.

Scott Fields Ensemble - Beckett Project
Not I
Click to Listen

Which was the first musical sound do you remember?
Opera from the family’s hi-fi system. Probably in Italian most often, but I hadn’t grasped the concept of “foreign language” and so I figured that the singers made up the sounds as they went along. Years later my father briefly married a soprano from the Chicago Lyric Opera’s chorus. That left me with deep love/hate opera memories. She buttered me up with lovely dress rehearsals and then scarred me by practicing scales in the car.

Do you mean my music or other people’s? Let’s start with mine. I try to work through new ideas in a way that is in some way beautiful and interesting.

As for other people’s stuff, like a lot of musicians, I rarely listen to music except in the line of duty. And that music has to be listened to analytically. Either it is something that I’m mixing, or I’ve been asked to learn, or dub to, or someone has given it to me and will later ask my opinion about.

When I do listen to music just because I want to, I tend to listen to recordings I know well. That keeps me from listening with a stethoscope. “Live at the Regal,” Julian Bream’s early Bach or Albéniz recordings, “Blond on Blond,” Henry Threadgill’s sextett, David Murray’s octet, the first couple of The Band recordings. Old stuff.

Fields-Lependorf
Advice to some young man
Click to Listen

It would be more accurate to say we tolerate each other. We’ve been married for decades and by now have fought over everything worth fighting about as well as a lot of stuff that didn’t matter in the end. Now we exist in a perpetual, tenuous truce.

I took up guitar because of guitar-centered singing groups, The Beatles mostly. My first paid gigs, when I was 16, were on guitar only. By the time I was 18 I was gigging on woodwinds as well. Then I gradually started eliminating instruments. The clarinets went first, then the saxophones, and finally, when I was in my 20s, the flute.

In the end I wanted to play an instrument that didn’t require you to appear in public with it stuck in your mouth, which I found embarrassing. I wanted to be able to play chords, but piano and organ are too machine-like for me. I need to touch the strings so that I feel connected to how the sound is produced.

“Proud” is pushing it. I’m able to tolerate a few of my recordings, but if I mention them the others will get mad at me for playing favorites. That said, “Fugu” holds a special place in my heart. It was recorded a couple of years after I’d taken many years off from performing. Before Fugu I’d recorded a couple of cassettes and a CD, but with Fugu I felt as though I was getting somewhere.

There is a chance that I have never intentionally completely copied a solo. It always felt wrong. One of my jazz guitar teachers may have convinced me to try, but I’m sure that any attempt I made was half-assed. But I did internalize solos accidently and some fragments keep popping up, mostly B.B. King’s.

What is the value of technique in art?

Meaning the combination of study, mental training and physical training? The more technique an artist has, the more likely it is that he or she will be able to execute an idea. I understand some faux outsider artists purposely fight against acquiring technique but I don’t get the thinking.

We’re on good terms. There was a short period when my live sextet included two painters. And I’ve been commissioned several times to write dance music, once by a children’s dance troupe.

Now and then I take the structures, moods, patterns, and rhythms of literary works and set them to music. “Mamet,” my first CD for Delmark, was settings of excerpts from five David Mamet plays. Two of my CDs, “Beckett” (Clean Feed) and “Samuel” (New World) are settings of, surprisingly, Samuel Beckett plays. A third one, “Barclay” is mostly written and waiting for nibbles from labels. I’ve set a couple of dozen Charles Bukowski poems, two of which appear on the CD “everything is in the instructions” (Ayler ) and one of which appears on “Kintsugi” (Between the Lines). The first track of Kintsugi is also a Mamet play fragment, a rearrangement of a leftover from the Delmark “Mamet” thing.

The digitization of music has the advantage of making it portable and available to almost anyone. It has made recording music much less expensive as well.

The disadvantages are that more people don’t pay for the music than do. The music also sounds worse than analog. It is sampled at such a low rate and with such limited resolution that it would sound worse on a great sound system. But lots of people downsample the music and listen on iThings through cheap buds.

Different sounds go different places. I do the best to find a sound I like for each moment. It’s easier in Cologne, where I have my own equipment and where I’m familiar with the studios and engineers.

I’m not much for pedals. When I travel I carry two kinds of tube distortion pedals and a photocell volume pedal. Sometimes in the studio I’ll use a tube tremolo pedal. I’m superstitious about solid-state devices. I don’t digitize my sound and I avoid transistors wherever possible. 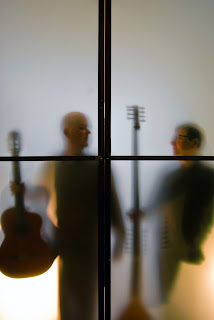 When I want a certain sound for a certain place, I try to figure out how to get it out of a guitar. Or sometimes it works the other way. I’ll find a sound and then think about how it might be used. For 15 years I’ve used a set of about 10 violin bows that I modified with various types of beads, strings, picks, and so on. 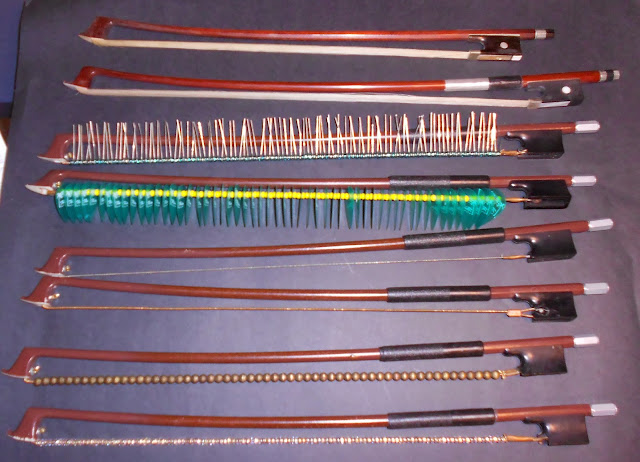 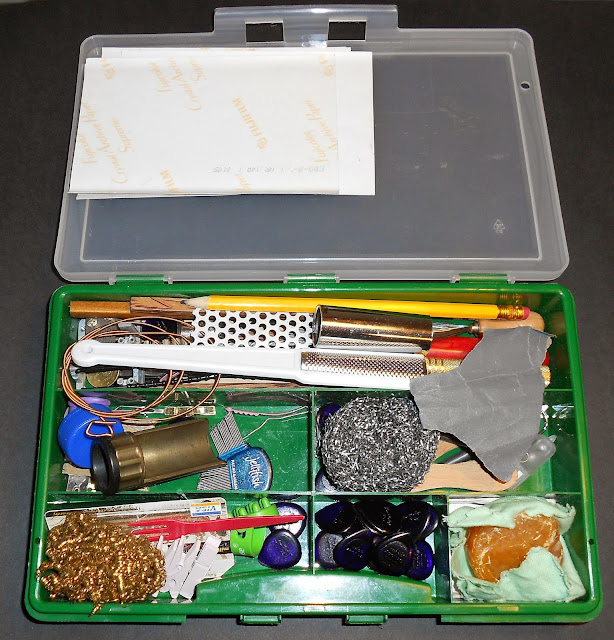 Noise is important to me and I try to produce many varieties. Recently I have started to use a Velcro-covered glove that I stick assorted knickknacks on, such as stones, coins, sand paper, pieces of guitar strings. And I have the usual collection of things to stuff between the strings, broken music box guts, battery powered mixers and fans. There’s also an eBow in my box, but I use it only when indicated in someone else’s score, which is far too often. 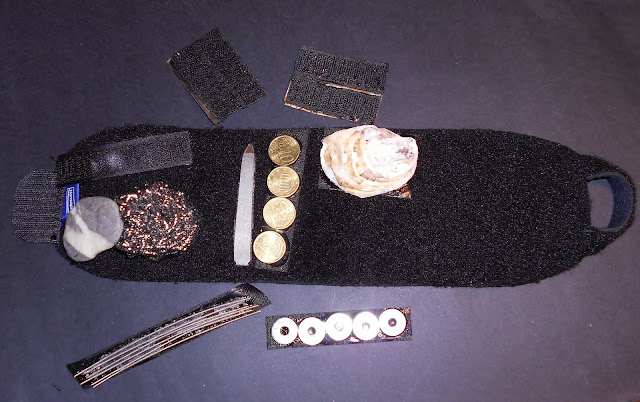 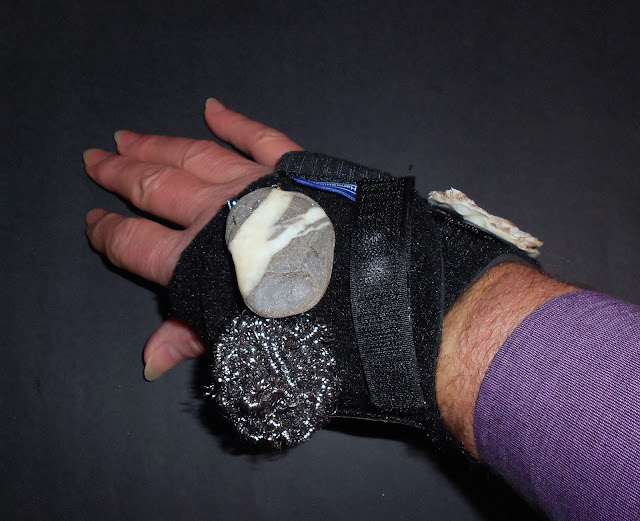 All of this stuff is for the electric guitars. When I play acoustic instruments I use preparations and sundry devices only when required to by other composers.

Sharp-Fields
Shuffle through the restaurateur gauntlet
Click to Listen

You mean artist with whom I haven’t worked before, right? When I lived in Madison, Wisconsin, in the states, Roscoe Mitchell lived there as well. For some time we got together at his place to play classical guitar-and-flute duets. We did that about once a week when we were both in town. But I never had a chance to write for him or to play his music. Either or both would be wonderful.

Upcoming in-progress sorts of things? I’m scheduling a recording for my String Feartet of the compete Haydn Sun Quartets, which I was commissioned to “reimagine” last year. There’s hardly any Haydn left in my versions. Shortly after that the Feartet will record my setting of a Sam Shepard play, which I have just started to compose. When those are in the can I will finish work on a suite of music for quarter-tone tuned steel-string acoustic guitar. Tomorrow I will go to the studio to mix a CD of Jeffrey Lependorf’s compositions on which he plays shakuhachi and I play classical guitar. Our first duo CD just came out on Ayler. In mid-2014 I hope to record my free jazz group, the Scott Fields Freetet. And I need to finish my final collection of Beckett music.

This is the photo and caption that Beckett requested for the cover of the first edition of Murphy. Sadly, it never happened.